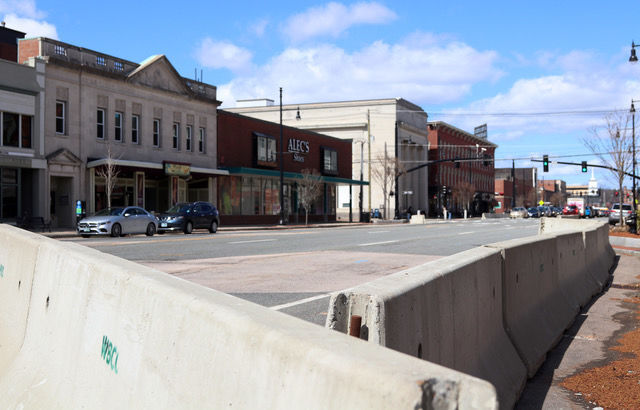 Alec's Shoes, center, will be demolished starting in early April to make way for the building of the performing arts center slated for this site in downtown Nashua. On Monday, barriers for outdoor dining have been placed along Main Street; the building is supposed to have protective barriers erected around it to keep demolition detritus off the street. 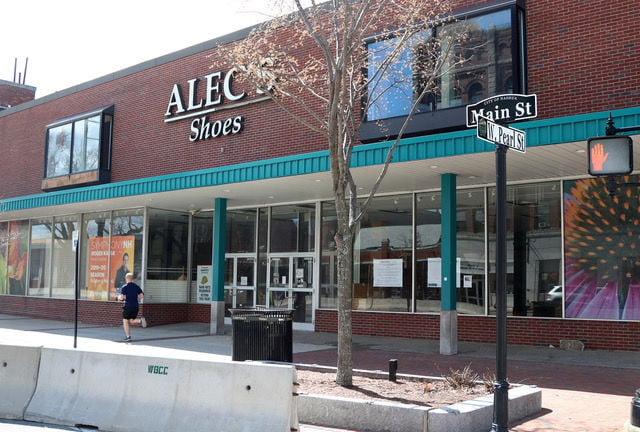 Alec’s Shoes will be demolished starting in early April to make way for the building of the performing arts center slated for this site in downtown Nashua. .

Alec's Shoes, center, will be demolished starting in early April to make way for the building of the performing arts center slated for this site in downtown Nashua. On Monday, barriers for outdoor dining have been placed along Main Street; the building is supposed to have protective barriers erected around it to keep demolition detritus off the street.

Alec’s Shoes will be demolished starting in early April to make way for the building of the performing arts center slated for this site in downtown Nashua. .

Years after the vision for a downtown performing arts center was crafted, the former Alec’s Shoes store building on Main Street is now set to be demolished on Monday to pave way for the new theater.

“That building will start coming down on Monday, tentatively,” said Rich Lannan, chairman of the performing arts center steering committee. “We are very much looking forward to it.”

Lannan said the demolition and cleanup process could take about four or five weeks to complete. Although the two-story building at 201 Main St. will be razed, the adjoining four-story red brick building at the rear of the structure along West Pearl Street will remain standing, he said.

“There will be barriers and construction fencing installed for safety. There will be a lot going on,” said Lannan, adding one lane of West Pearl Street will be closed to traffic during the demolition process.

Harvey Construction is managing the $25 million performing arts center project that will take about a year and a half to complete in the heart of Nashua’s downtown. The theater is expected to be open during the summer of 2022.

“We are so excited. We have been waiting for this,” said Lannan.

A large excavator will be used to demolish portions of the building at various times, and work is expected to be finished by 5:30 p.m. daily; no demolition will take place on Sundays, he said.

A significant amount of utility work has been ongoing and must be completed before demolition begins, according to Lannan, who anticipates that the utility relocation will be done by Friday.

In the meantime, Jersey barriers were deployed along Main Street on Monday to allow for extended outdoor dining in the downtown area, said Amy DeRoche of the city’s economic development office.

“The construction company will get them all in place today,” DeRoche said on Monday, adding a total of 2,400 linear feet of Jersey barriers will be installed.

Although the barriers were installed Monday, she explained that the final configuration of the barriers will not be complete until April 14.

Starting this week, two artist groups have been selected to paint the barriers throughout the next two weeks.

“We have temporarily placed the barriers against the curbs and lined them up in parking spaces so that the artists are safe as they work,” said DeRoche, adding the barriers need to be heated to 55 degrees for the paint to adhere to the cement surface.

Beyond Walls and Positive Street Art are the two art groups that will be taking on the beautification project.

Surf restaurant, which is next to the site of the future performing arts center, will continue with its outdoor dining despite the construction next door.

“They are going to keep the dust down and keep that to a bare minimum,” Lannan said of the demolition crew, explaining that water will be used to contain the dust.

There will be construction noise, said Lannan, who added that efforts will be made to keep the demolition and construction disruptions at a minimum for local businesses.

DEAR ABBY: My sister and I are best friends. She has always been caring, empathetic and passionate about helping others. Now, however, COVID has turned her into a real piece of work.

DEAR HELOISE: Please ask your readers to dispose of plastic shopping bags correctly. They are easily carried off by the wind, and they get stuck in trees and on fence posts — unsightly and dangerous to birds and other wildlife.

DEAR ABBY: My husband and I have had a total of six miscarriages — one before our miracle son and five since we began trying for a second child more than two years ago.

Hints from Heloise: Waste not

DEAR HELOISE: I like to use a box of baking soda to deodorize my refrigerator and keep a box in the fridge for several months. Can I then use it in various recipes? I hate to waste food, and if the baking soda is still useable, I’d rather not just toss it out.