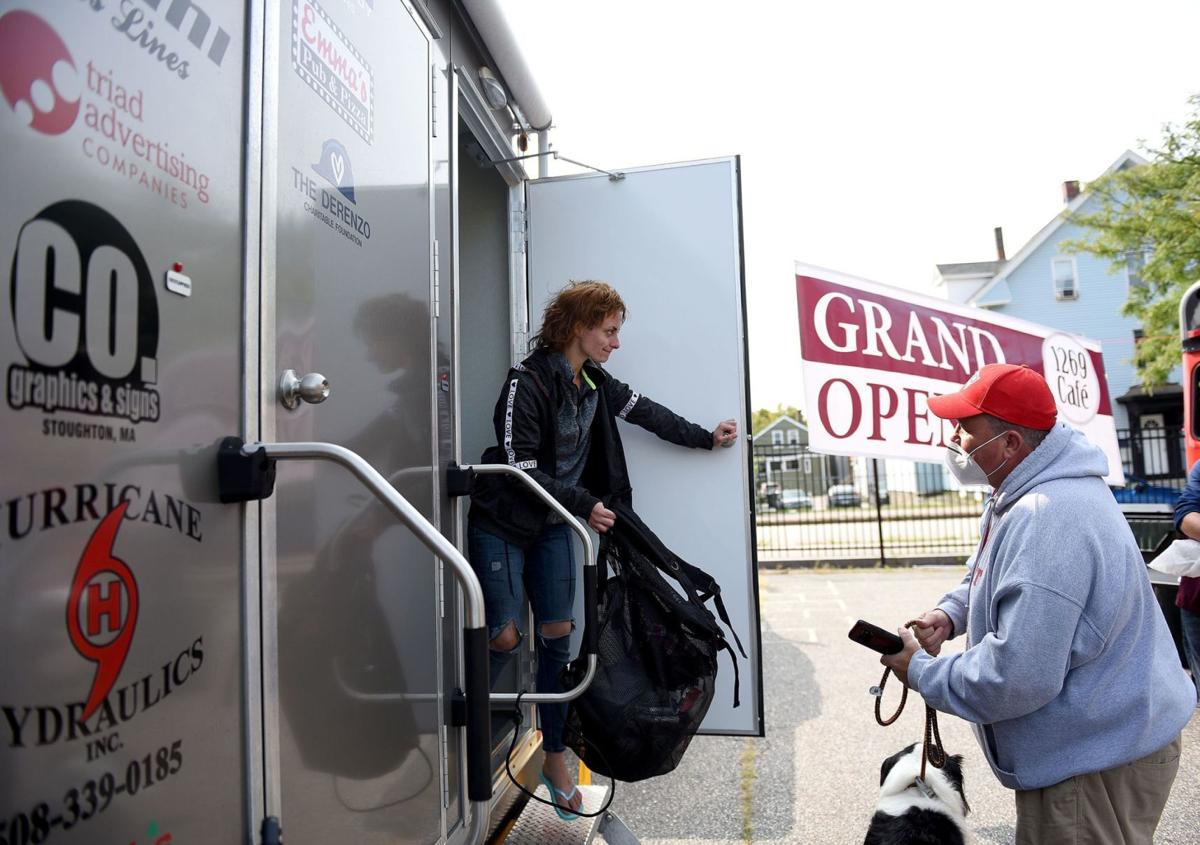 Rachel Conway, who is homeless, emerges from a shower at the Soupman mobile convoy at the 1269 Cafe in Manchester on Tuesday. Also pictured is “Soupman” Peter Kelleher. 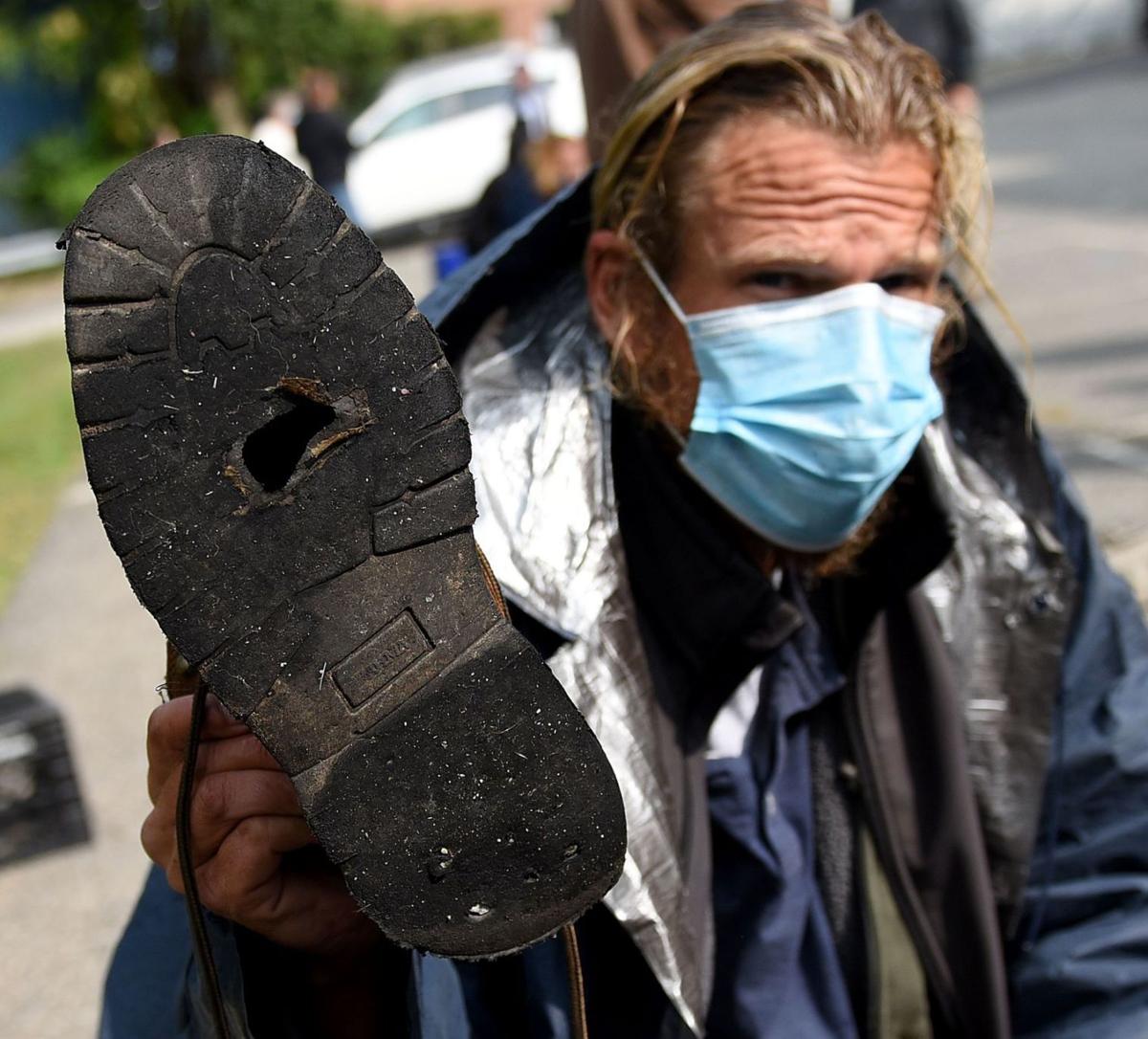 Doug, a homeless man who did not give his last name, holds up his worn-out shoes, which he was able to replace after taking a shower at the Soupman’s mobile convoy at 1269 Cafe in Manchester on Tuesday. 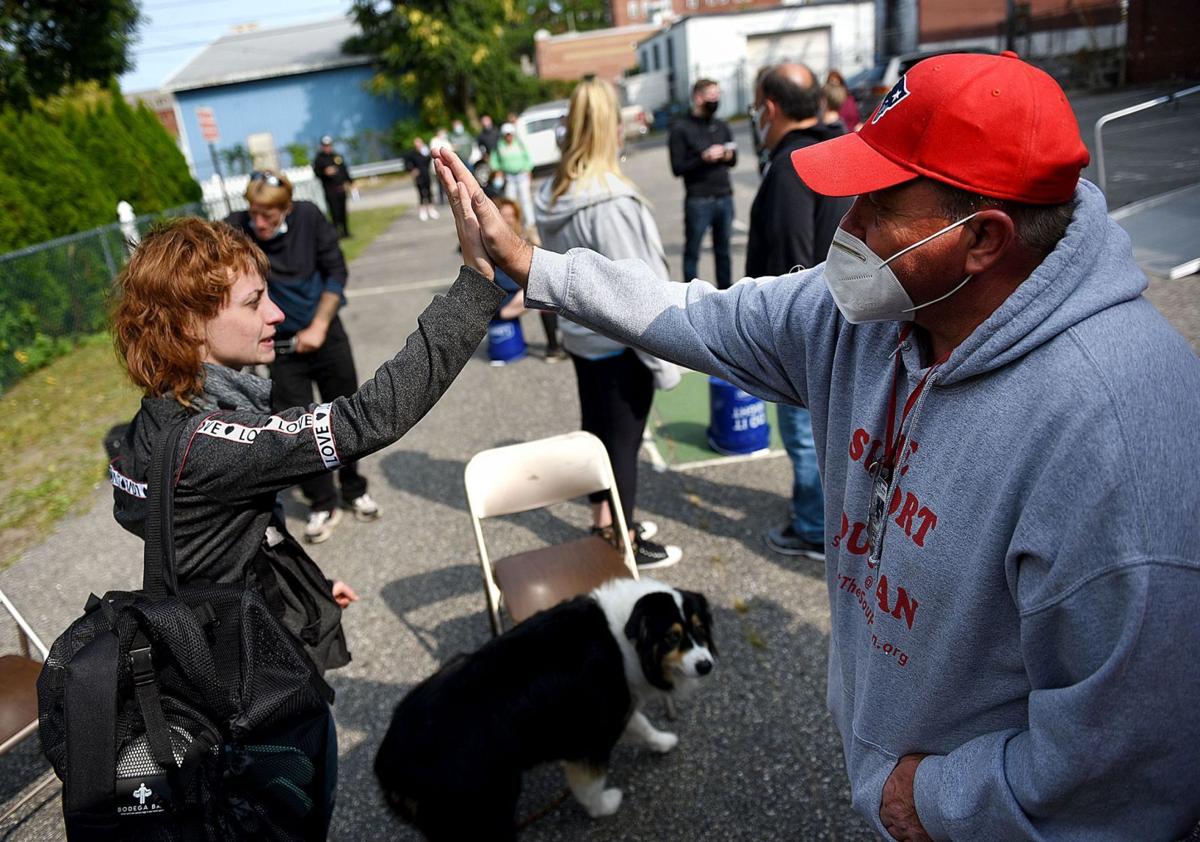 “Soupman” Peter Kelleher high-fives Rachel Conway, who is homeless, after she showered and got new clothing Tuesday at the Soupman mobile convoy at the 1269 Cafe in Manchester. 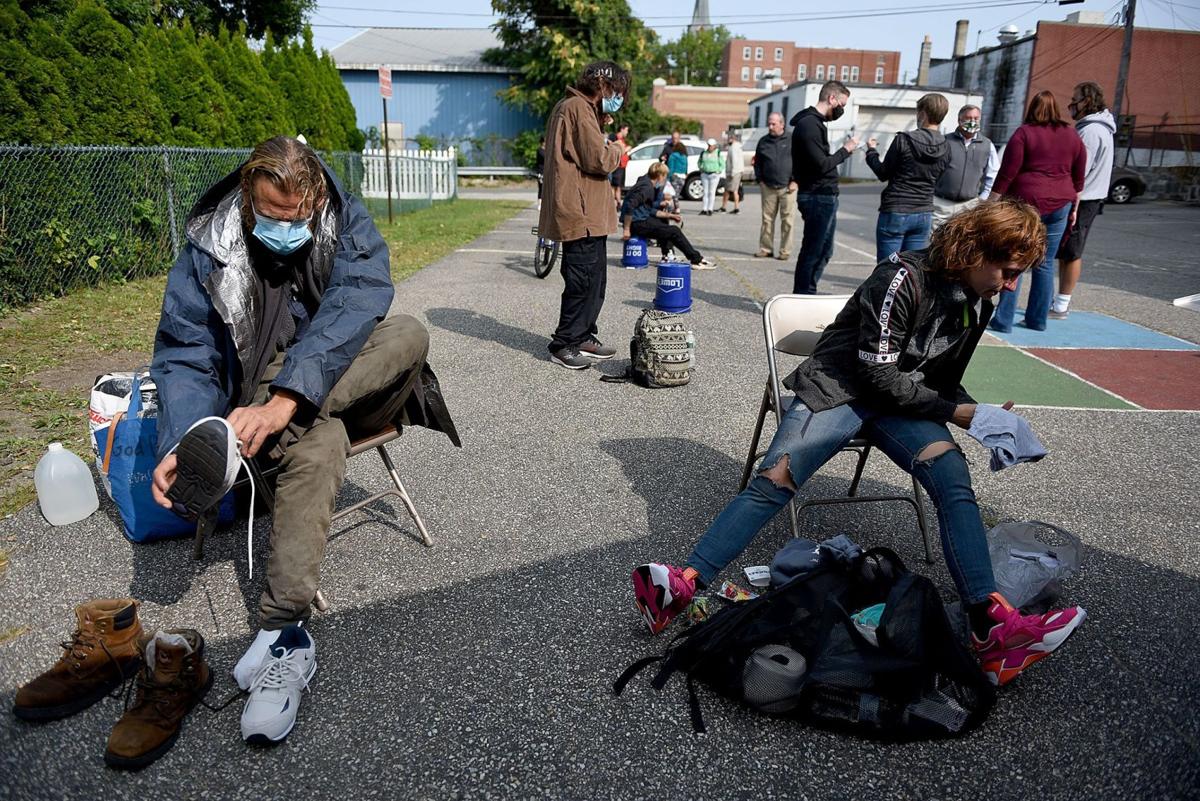 Homeless people try on new clothing Tuesday at the Soupman mobile convoy at the 1269 Cafe in Manchester. 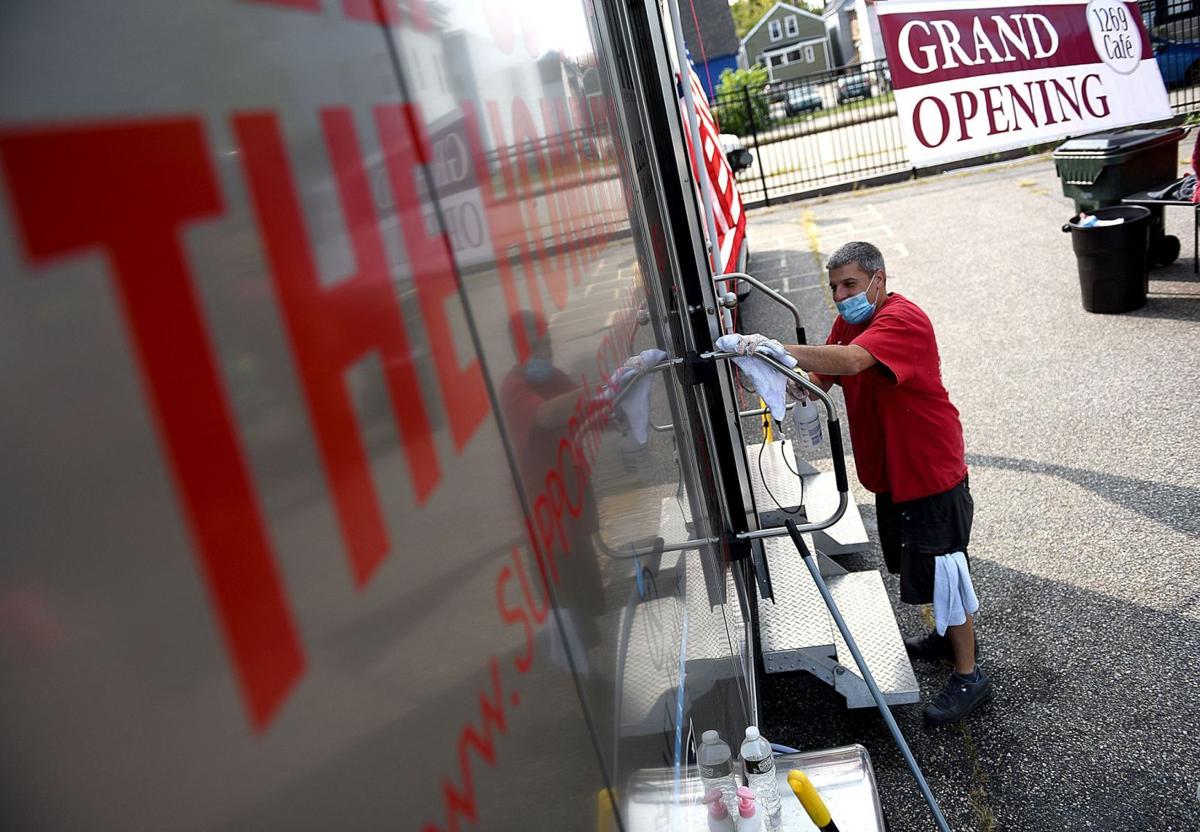 Bobby Conroy cleans the shower trailer Tuesday during a stop by the Soupman mobile convoy at the 1269 Cafe in Manchester.

Peter Kelleher parked his organization’s dual-axle shower van — funded by New England Patriots owner Bob Kraft — in the parking lot of the former St. Casimir School on Union Street. A Christian outreach ministry, 1269 Cafe, acquired that building last week and plans to use it to deliver lunch, necessities and showers to the city’s poor and homeless.

But for the time being, the building lacks what Kelleher provided on Tuesday — showers. He plans to provide them on Tuesdays into the foreseeable future.

“It was good, refreshing. It’s nice when you get rained on on purpose,” said Michael Seiders, 36, who sleeps outside at the Hillsborough County courthouse.

Seiders and others taking showers also got a free change of clothes, a new pair of sneakers, a mesh bag/backpack to carry their dirty clothes and a voucher to clean them at a nearby laundromat.

The showers and clothes are provided by the Soupman, an organization that Kelleher founded about three years ago. He travels to New England destinations to provide food, clothes, showers and other necessities to the homeless.

Kelleher directed much of the operation on Tuesday morning. His workers cleaned the three showers after each use and distributed clothes and sneakers. Approximately 65 had gone through by the end of the three hours, said Mary Chevalier, co-founder of 1269.

“Why do homeless people get such nice sneakers?” said Rachel Conway, 22, as she laced up her new pair of bright pink basketball shoes that Soupman workers provided after her shower. “I’ll get robbed with these.”

Kelleher said his son died homeless in Bangor in September 2016, and he started his Soupman organization about a year later. Sponsors include the Kraft family, Ocean State Job Lot, the Paul Newman Foundation and 3M.

His son, Travis, “was a handsome guy and very smart, very engaging. He wasn’t — I don’t mean to insult anybody — a normal drug addict. I lost him to the streets of Maine,” Kelleher said.

He is quick to name sponsors who provided help with his effort: Honda Power Equipment, Jersey Mike’s, Lucini bus lines. And the Bridgewater, Mass., resident said he will soon open a Soupman mini-home village in Massachusetts; he plans to expand his effort nationwide.

“We’re losing our children left and right” to drug abuse, he said.

Kelleher has a fleet of shower units, school buses and pickups that he uses to deliver necessities throughout New England.

He comes to Manchester as 1269 Cafe prepares to move from the former Manchester police station to the St. Casimir building. Plans are to eventually open a 32-bed supportive housing operation for people who want to get off drugs or alcohol, Chevalier said.

The organization offers lunches and showers on a daily basis, but the school does not have working showers, she said.

Soupman will provide the showers on a weekly basis, and he plans to help 1269 raise the money to install its own showers.

“He’s an answer to a prayer for a short term,” said Chevalier, who expects to move in by the end of this month. “He’s an amazing guy. He’s got a heart for the people we serve, and I see nothing but positives.”

Seacoast MLK celebration is a timely call for hope and unity

Hints from Heloise: Stock your closet

Dear Heloise: If this year has taught me anything, toilet paper, wipes, bathroom cleaner and facial tissue are all important to keep on hand. — Brian B., via email

Dear Heloise: I like to buy organic potatoes that come in a bag but always heard not to store potatoes in the refrigerator.

How to ease winter's indoor allergies

If you have a tickly nose and frequent sneezes when you're indoors, don't stifle it. One man in England did just that, and according to the report in the journal BMJ Cases, he tore a hole in his windpipe. A better move: Get rid of the offending allergens. They commonly include dust mites, co…

Modern-day preservationists bring Victorian gem back to life in Concord

Modern-day preservationists bring Victorian gem back to life in Concord