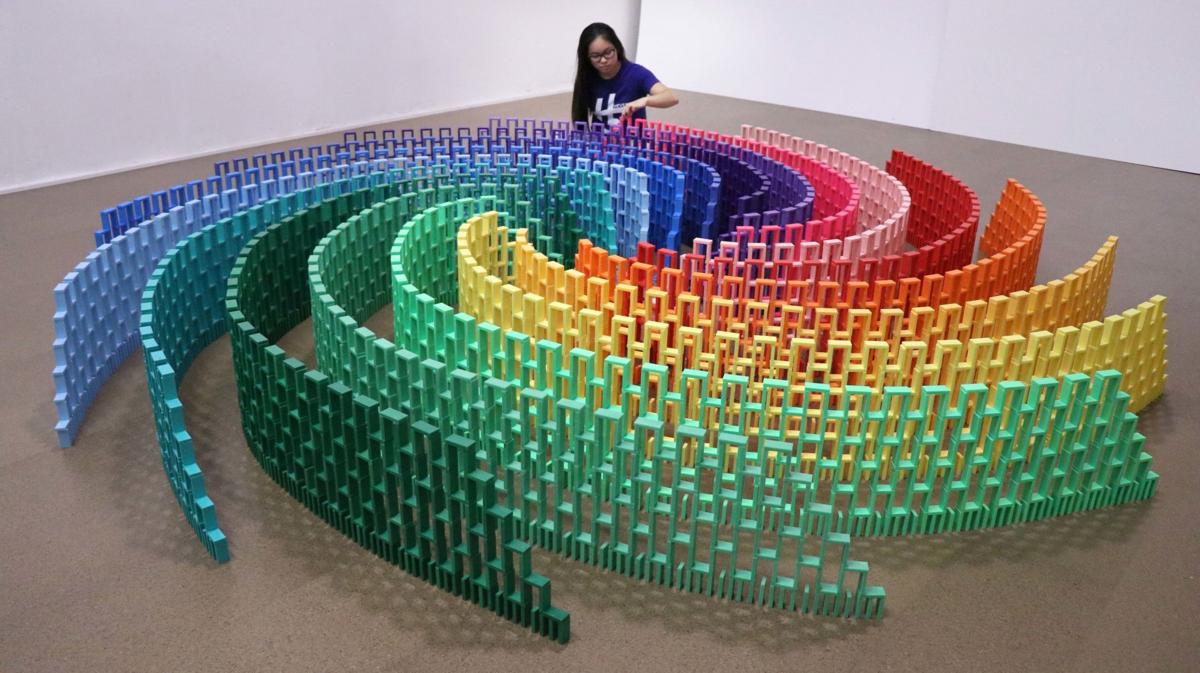 Lily Hevesh stars in “Lily Topples the World,” a documentary premiering at South by Southwest this week. 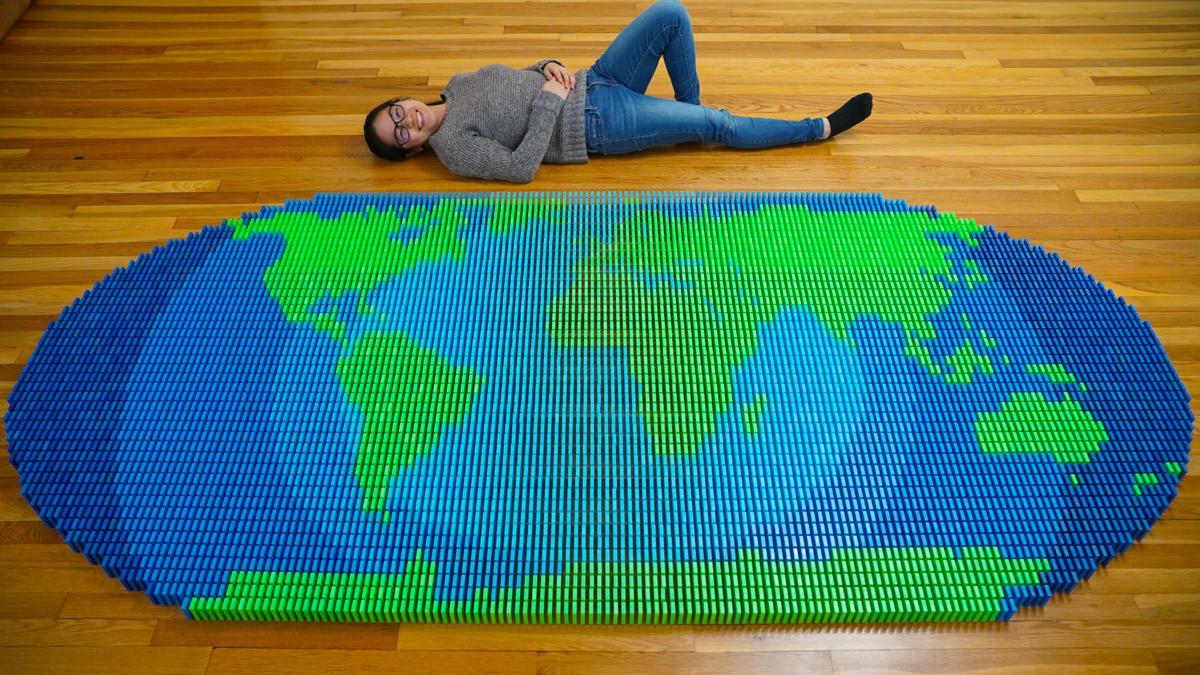 Lily Hevesh stars in “Lily Topples the World,” a documentary premiering at South by Southwest this week.

After 25 hours over eight days, the time had come for Lily Hevesh to topple 15,000 dominoes. With a soft flick of her finger, Hevesh stood back and listened to her favorite sound on repeat: one domino hitting the next.

One minute and 24 seconds later, the “amazing triple spiral,” the domino artist’s maze of a masterpiece, had been destroyed — and she was delighted. Her joy was shared in the more than 114 million views since the video was published in 2016.

“For some reason, I love watching them fall,” Hevesh said in an interview last week. “It’s just really satisfying to hear the click-click and see it topple.”

Nearly six years later, the 22-year-old known to millions as “Hevesh5” is arguably the brightest star in the domino universe.

As one of few women to compete professionally as a domino artist, her complex designs featuring tens of thousands of pieces have gone viral for years. At more than 1 billion views and 3 million subscribers on YouTube, her artistry has led her to working with some of the biggest brands and personalities in the world — from Disney, Pixar and Marvel to Will Smith, Katy Perry and Jimmy Fallon. Hailed by Inc. magazine as the “queen” of domino art, Hevesh launched her own line of dominoes last year.

She is one of many young YouTube stars to have broken through in recent years — a generation of content creators who have found their voices, built communities and become role models through breathtaking videos shared across the Internet.

“Lily’s journey is a bit of a coming-of-age story,” Workman said to The Washington Post. “It wasn’t just this artist with this incredible success. It was also this story of a young woman who kind of found herself.”

As Hevesh’s family tells it in the film, she was abandoned as a newborn by her biological parents in China before being adopted in the United States. Her mother said Hevesh was insecure and “scared” growing up in Sandown, N.H., but a day with her grandparents would change all that.

In 2008, when she was 9 or 10, Hevesh first discovered their 28-piece set of dominoes and started playing with them in the back of her grandparents’ camper. Over and over, she would set them up and knock them down, mesmerized with each click of the classic black-and-white dominoes.

“I would build dominoes on the table, and then I’d have it go on the floor and try to see where it lands so I could match up the domino line,” she said. “It was kind of a game for me to build the dominoes and design in a way that I knew it would make sense and it would work that chain reaction.”

After searching for “dominoes” on YouTube, the volume of intricate domino setups she found had Hevesh hooked. In 2009, she started her YouTube page at age 10, quietly going against the platform’s rules prohibiting anyone younger than 13 from launching a channel.

Although “Hevesh5” — a nod to her being the fifth member of the family — initially remained anonymous, her videos were beginning to get widely shared. Her free-form style of domino design would be recognized in 2013, when Campbell’s Soup asked the 13-year-old to create a commercial, she said. That year, a three-month collaboration with another domino builder called “INSANE Domino Tricks” led to her first viral video, with more than 163 million views.

“I was just doing this for fun, and it kind of spiraled from there,” she told The Post.

While fans knew the artist for the dominoes, another question was left unanswered: Who is “Hevesh5?” After 6 1/2 years of posting anonymously, Hevesh announced in a 2015 video who she was: “Yes, I am a girl.”

While the response to the teen’s videos has been overwhelmingly positive, she said, there were times when detractors would leave racist and sexist comments on her videos.

“Not everyone is going to accept you or like you, and that’s something that I’ve had to come to terms with,” she said. “This is my story, I’m going to share it and if they don’t accept it, then that’s OK.”

Tran, best known for playing mechanic Rose Tico in the most recent Star Wars trilogy, told The Post that she was proud of Hevesh for how she’s handled her trolls. The actress, who faced her own intense online harassment years ago, noted that Hevesh is a role model for how she’s grown up on YouTube.

“Here’s this woman who loved this thing, who maybe people might not have understood or might have doubted her choice. And to see her really just recognize the power in following her own passion, instead of listening to the fear of other people and just seeing where that has taken her, that’s inspiring for everyone,” Tran said. “I think it’s inspiring for me, even now.”

Hevesh’s ascent in the online world has also come with sacrifice. Not long after she released the video of the triple spiral, Hevesh decided that if she were to continue being one of a few professional domino artists in the world, she would have to leave college after her first year. She enjoyed studying mechanical engineering and product design at Rensselaer Polytechnic Institute, Hevesh said, but she told her mom that she could do more to promote STEM by continuing a career that was already well underway (with the assistance of her father).

“I just couldn’t see myself going all four years,” she said. “What am I going to do with a degree when I technically already have my dream job?”

Instead of a classroom, the domino artist has crafted her designs in museums, movie sets and on “The Tonight Show.” She’s also started a business: Last year, she announced a deal with toymaker Spin Master to sell H5 Domino Creations at all major retailers.

On a video call last week, the 22-year-old promised that even with everything she’s done so far, she still had her sights set on breaking the world record for the largest domino build ever. To do so, she said, would mean building the “most insane” design of 5 million dominoes and a giant team working up to three months to put it together.

While Workman and Tran gasped at the thought of 5 million dominoes, Hevesh calmly nodded her head and grinned, almost as if she’s got a design in mind before she ever hears that first clicking sound of a domino toppling over.

“That would be amazing,” she said.