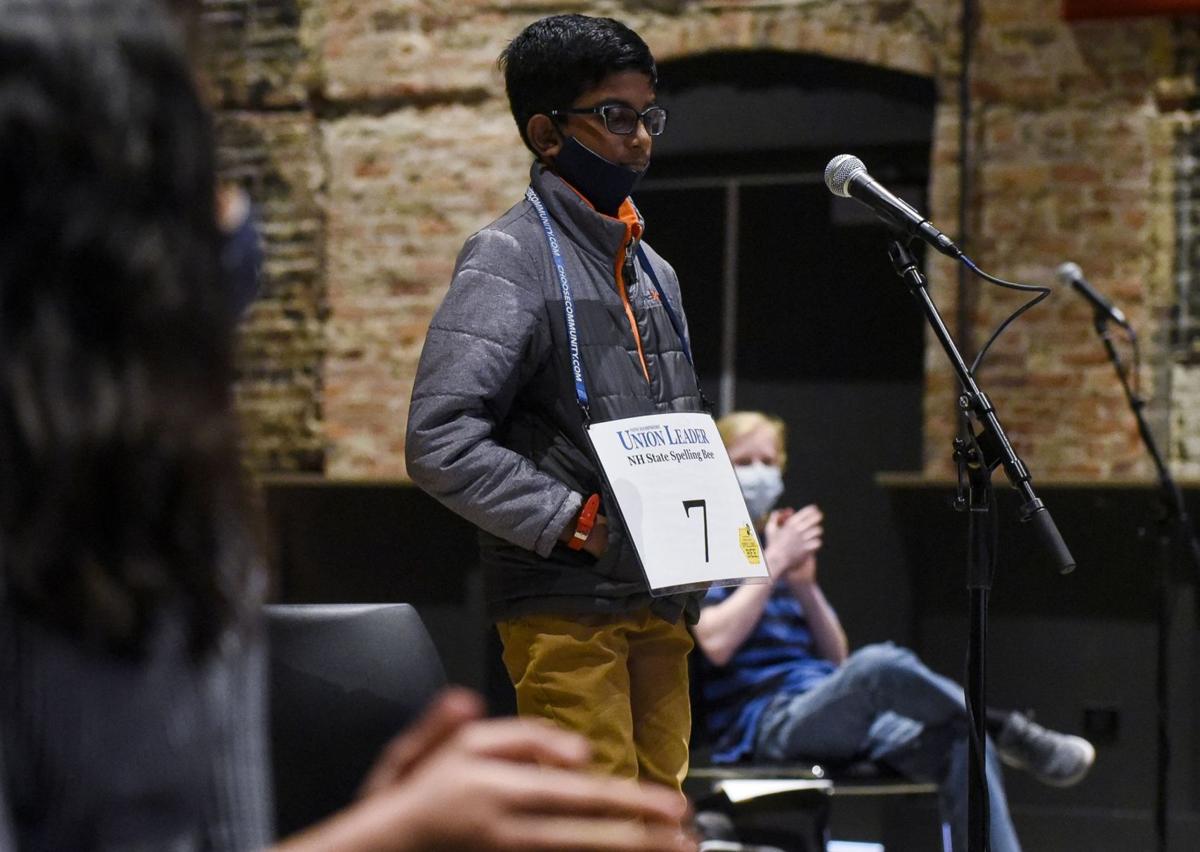 Aadhavan Veerendra, a sixth-grader at Portsmouth Middle School, is applauded as he wins the Union Leader New Hampshire State Spelling Bee held at the Bank of New Hampshire Stage in Concord. 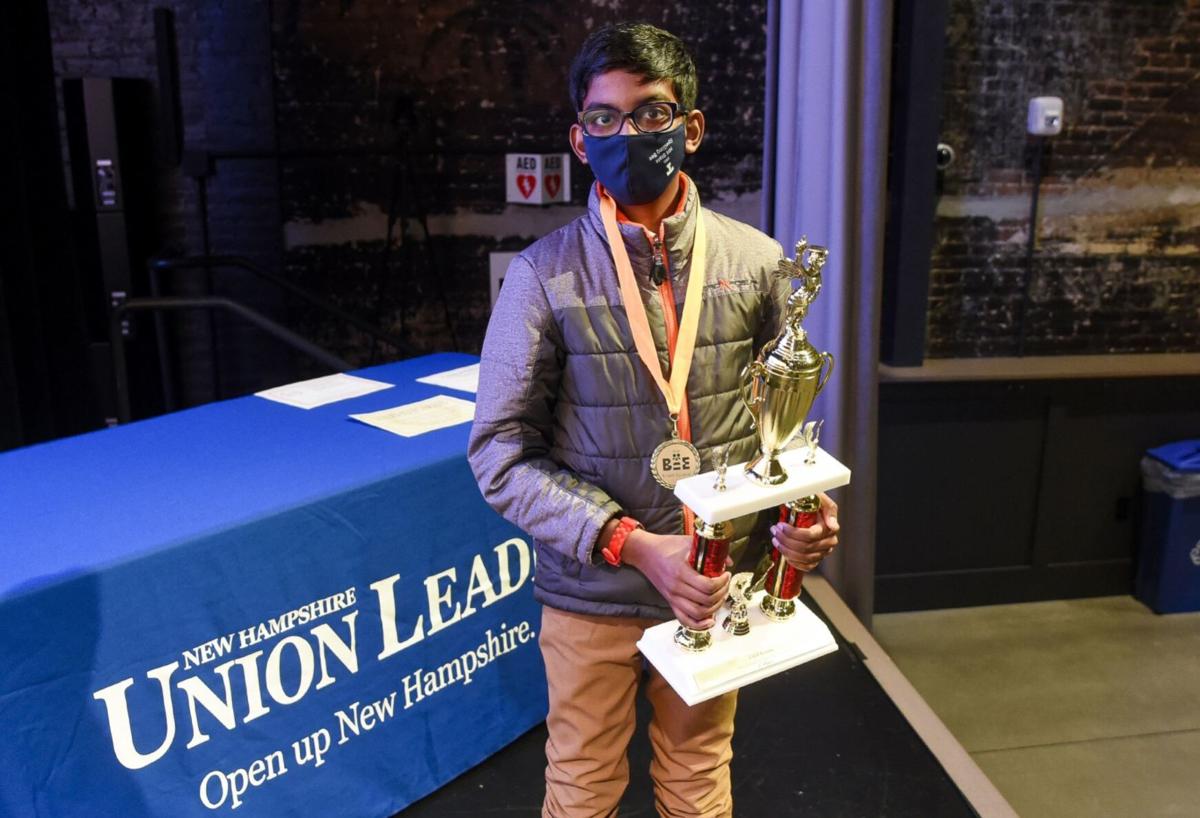 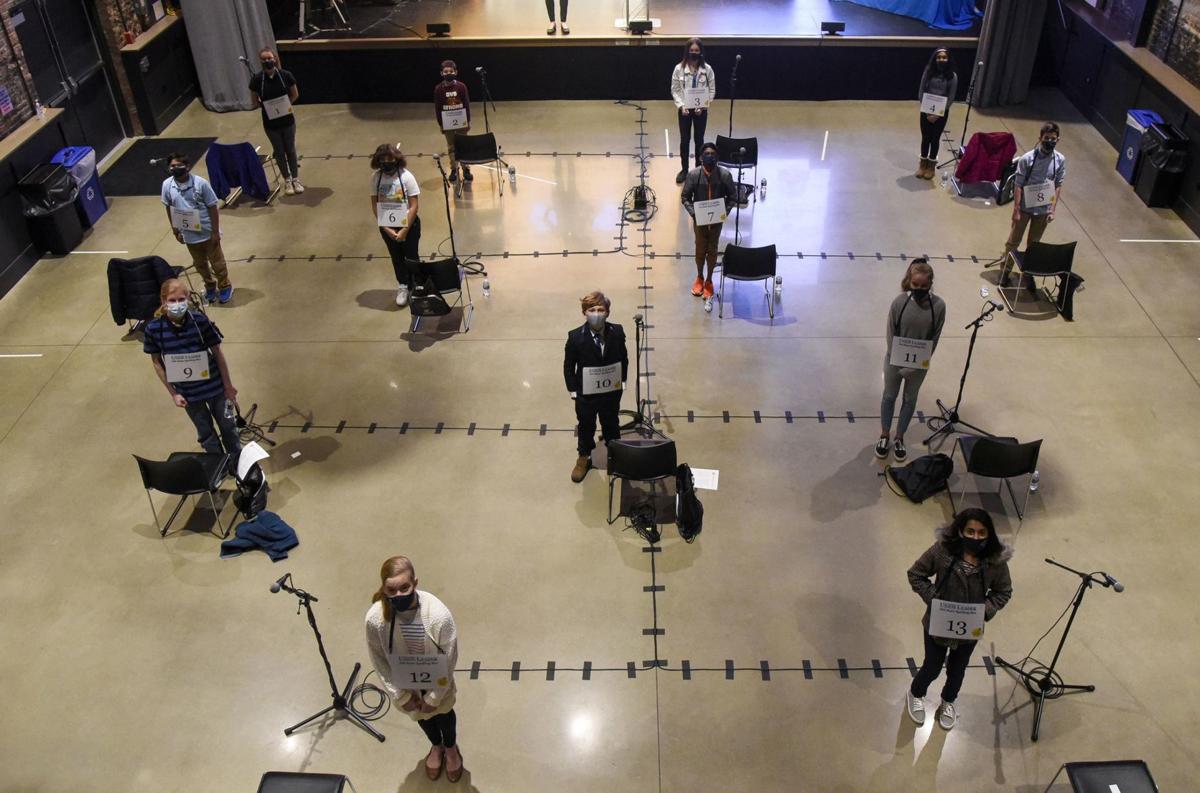 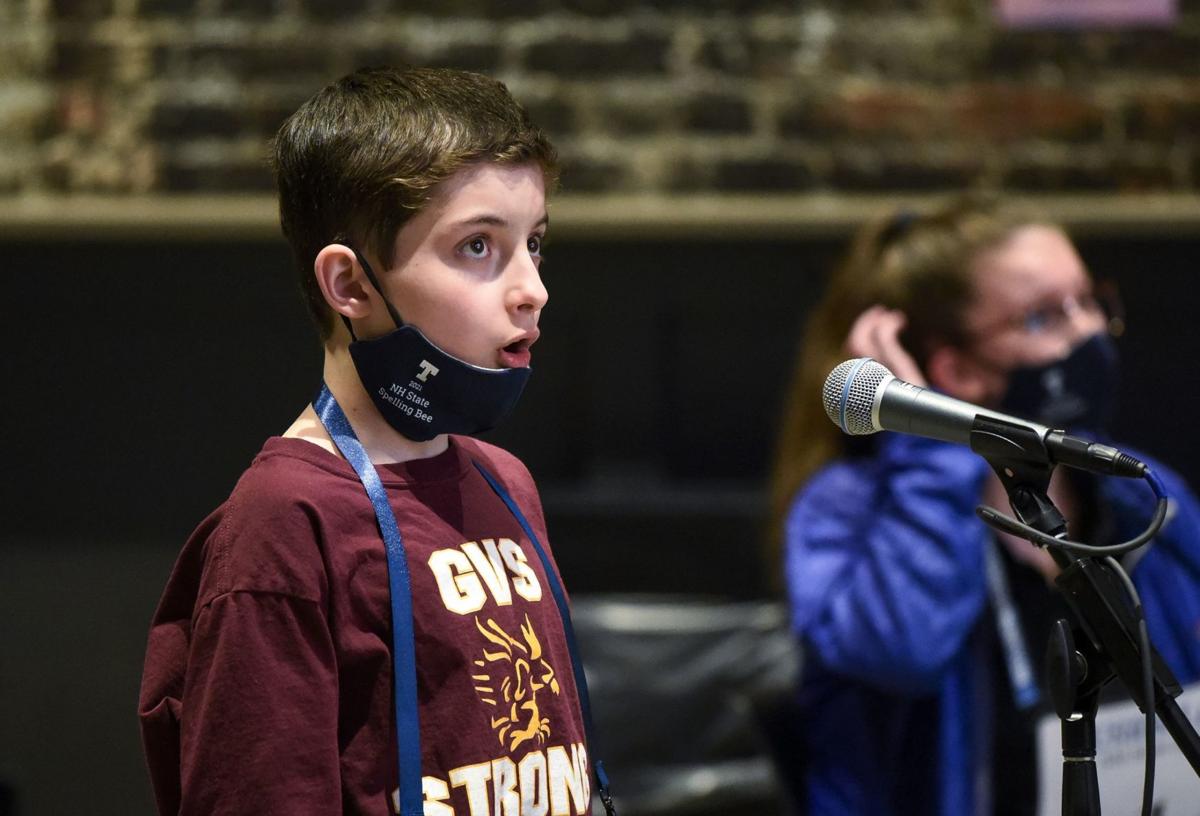 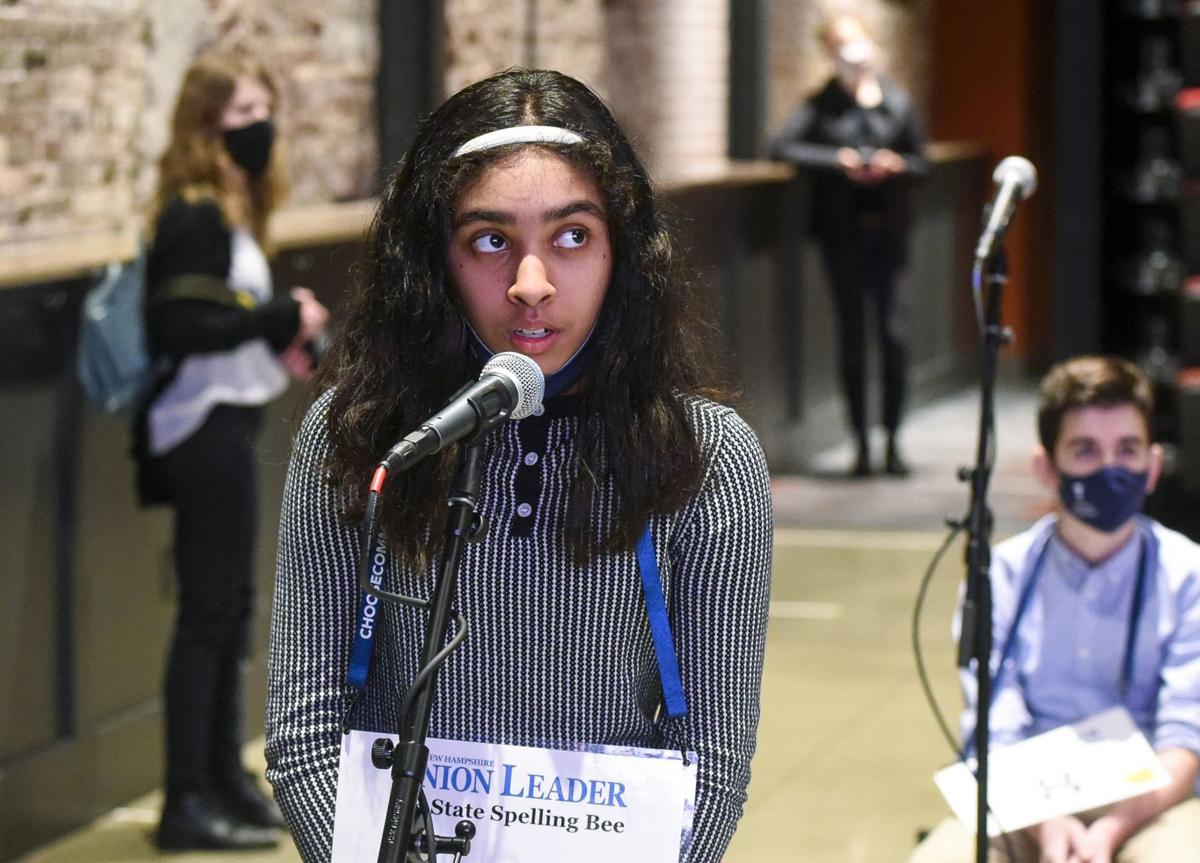 Annika Garimella, from Fairgrounds Middle School, spells a word during the Union Leader NH State Spelling Bee held at the Bank of NH Stage in Concord. 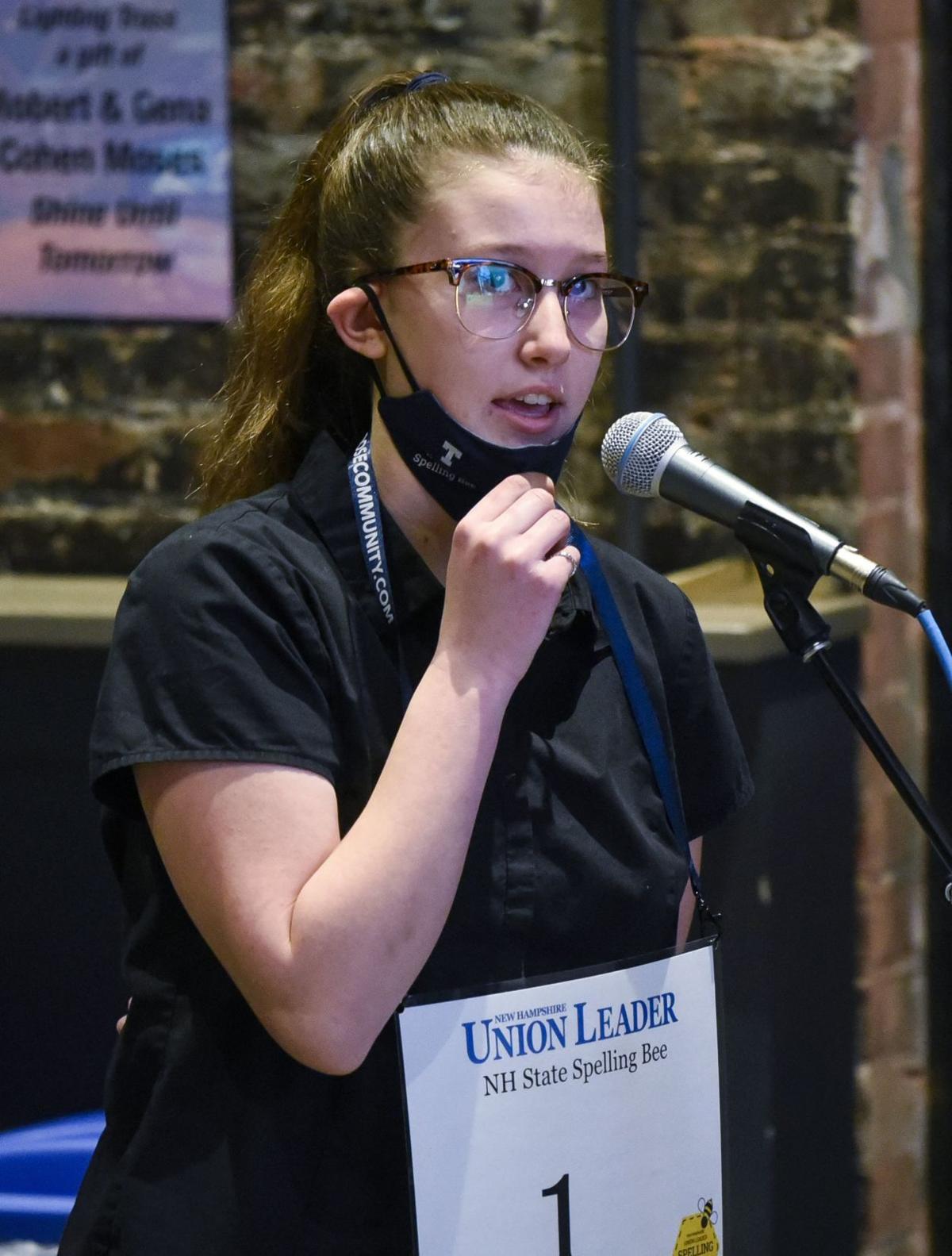 In the week leading up to the 68th Union Leader New Hampshire State Spelling Bee, Aadhavan Veerendra, 11, and his mother, Uma Veerendra, spent up to an hour practicing each day.

At home in Portsmouth, Uma Veerendra would read a word from the official Scripps National Spelling Bee word list. Aadhavan Veerendra would spell it for her. Most of the year, the two practice about 15 minutes every day, with the sessions stretching longer as a competition approached.

He kept practicing and won his second state spelling bee Saturday at a competition at Concord’s Bank of New Hampshire Stage.

The pandemic is beginning to recede, but the spelling bee is still taking precautions to limit the potential spread of the virus.

Spellers were allowed to bring only one family member to Concord, and everyone sat at least six feet from each other, removing their masks only to spell into individual microphones.

Carolyn D’Aquila, longtime pronouncer of the New Hampshire State Spelling Bee, said she missed the usual semi-chaotic atmosphere of the bee — “when they’re sharing microphones, climbing over each other,” she said.

The setting was different from last year’s competition in Plymouth, but as Veerendra took his seat on the theater floor he felt ready to win again.

As the rounds went on, other spellers stumbled. A gentle bell signaled a mistake.

“So close!” D’Aquila said. Spellers are eliminated after one misspelled word. They took off their numbered bibs, and sat in their chairs on the theater floor.

D’Aquila did her part to keep the mood light, joking with the spellers as she delivered definitions, used obscure words in sentences and explained the origin of the words.

“I like sharing my enthusiasm for the words,” D’Aquila said, but she gets that the spellers aren’t playing just for fun. The spellers, all middle-school students, can get a little intense, she said. “They’re in it to win it.”

Uma Veerendra watched from the theater balcony as Aadhavan spelled word after word. She knew he could spell everything but worried he might get nervous.

“I was thinking how he would face the situation, being there on stage,” she said.

The bee came down to Veerendra and Harun Siddiqui, of Penacook Elementary School.

The last word was “dhole,” an Asian wild dog. The word is pronounced “dole,” with the “h” silent.

“No pressure,” D’Aquila said. “But if you spell this right, you win.”

He did feel the pressure, Veerendra said after the competition. But he knew the word.

Father Veerendra Krishnan beamed as Aadhavan Veerendra picked up his trophy and the family posed for photographs. He hopes his son will have the chance to compete in the national bee this year, after the 2020 contest was canceled.

“I am so happy,” Krishnan said. “He’s a very hard worker, very dedicated, and he put in a lot of effort.”

Dear Abby: Family estrangement is hard to explain to kids

DEAR ABBY: I am a woman who has been through a lot. I grew up thinking my grandmother was my mother, my mother was my sister, my uncle was my brother, and my own siblings my nieces and nephews. A “family issue” brought it all out in the open, and now I am estranged from my family.

DEAR HELOISE: My fiance and I wanted a small, intimate wedding with only a few people, a nice luncheon and we would be off on our honeymoon. We had a budget that wouldn’t budge, which meant each family could invite only 25 to 30 people. My in-laws were furious. They had a list of 116 people …

DEAR ABBY: There is a woman where I work who is emotionally needy. My work is autonomous, but we are in the same group, so I have to interact with her to some extent.

DEAR HELOISE: You shine a light on service dogs quite a bit; allow me to tell you about mine.