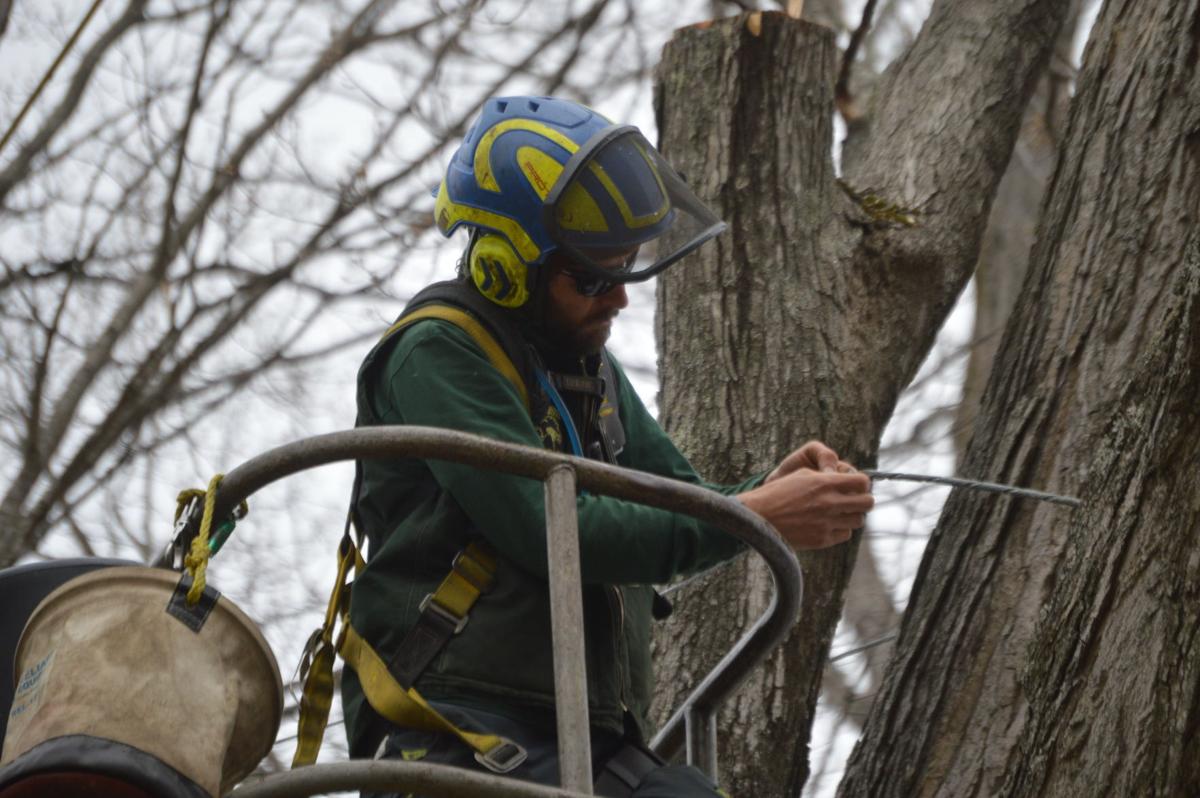 Micum Davis, arborist and owner of Cornerstone Tree Care, tightens cables holding up part of a massive sugar maple tree on the Buxton property before it was removed on Monday. 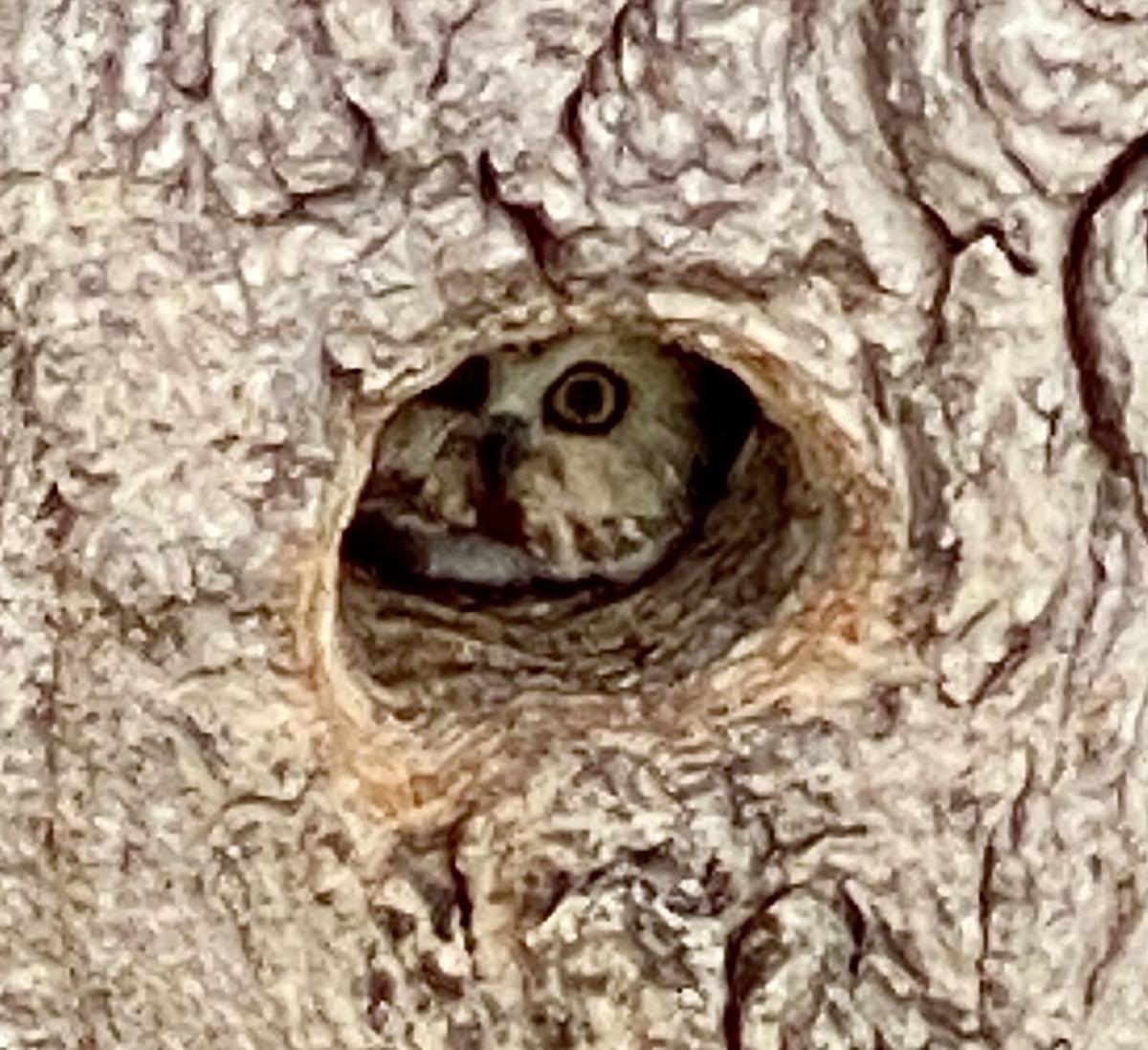 An owl peeks through a hole in the sugar maple last week. The owl apparently flew away before work began to remove the tree on Monday.

Micum Davis, arborist and owner of Cornerstone Tree Care, tightens cables holding up part of a massive sugar maple tree on the Buxton property before it was removed on Monday.

An owl peeks through a hole in the sugar maple last week. The owl apparently flew away before work began to remove the tree on Monday.

KENSINGTON — As the “Old Lady” came down Monday, those who knew her well and others who were strangers gathered to watch.

The felling of the 240-year-old sugar maple that was the largest known in the country was something the Buxton family and local townspeople hoped they would never see.

“It’s not fair to her to let her stand out there and not be as beautiful as she always has been,” Janet Buxton said, fighting back tears as she reminisced about the tree that had given five generations of her family so much since they arrived at the Drinkwater Road farm 67 years ago.

While the tree was dying and had to be removed for safety reasons, the Buxton family is hoping that some of it can be preserved.

A.J. Dupere, a forester with the Urban Forestry Center in Portsmouth, said some cuttings will be taken from the top to possibly regrow a tree with a similar genetic makeup, but the success rate is only about 10%.

“It’s worth trying with a big old tree like this,” he said.

The forestry center has a portable sawmill and is planning to mill some lumber from the tree that could be used by the Buxton family to create some mementos.

The tree is listed on the National Register of Champion Trees as the largest known tree of its species in the U.S. based on measurements given to American Forests, the country’s oldest national nonprofit conservation organization.

Dupere said the conditions were ideal for the tree to live a long life.

“This tree was in the perfect spot for a sugar maple. Sugar maples don’t like salt, but the road is quite a ways away, and it’s quite a bit lower so any road salt wasn’t getting up to this,” he said.

Before the tree was removed in pieces, a brief ceremony was led by Micum Davis, the arborist and owner of Cornerstone Tree Care in Portsmouth, who has been the tree’s caretaker since 2008.

Davis read “Goodbye ‘Old Lady,’” which was written mostly by Buxton’s sister, Betsy, who lives in Ohio and was unable to attend.

“Today we say goodbye to a legend, to one of a kind, a living landmark. We attempt to acknowledge all that you have witnessed in your lifetime and the secrets you have harbored,” Davis read in part.

”We envy the stories you could tell of the comings and goings at this homestead; of listening to front porch visits; protecting children who have slumbered peacefully under your branches, frolicking and laughing under your shade; of animals, birds and insects who have lived in your branches seeking shelter in your arms. We appreciate the cool breezes you provided in the summer, protection from high winds through winter and the nutrients you have given back to the earth through the circle of life each year. Your value has been immeasurable,” he said.

Spectators included Amanda Casey, who lives nearby and whose husband grew up on Drinkwater Road. She stopped to watch with her children, Emmett, 4, and Weston, 3.

“To see it come down was sad, but it also feels like a little part of history that we get to witness,” Casey said.

“I just wanted to see this 250-year-old tree. You see trees, but you never know how old they are and it’s just so interesting,” said Diane Pease, who traveled with her husband, Russ, from their home in Manchester to watch.

Janet Buxton said the property, which is owned by the Buxton Family Realty Trust, will be placed on the market in the coming months. She’s been living on the farm and plans to build a cottage down the road. She said she hopes wood from the tree can be used to make her kitchen counters.

According to the national register, the tree stood 101 feet tall, had a crown spread of 100 feet and a trunk circumference of 230 inches. The tree was planted next to another sugar maple around 1780. The second tree isn’t as big, but it’s still considered healthy and will remain.

As Davis and his crew worked, they watched for signs of wildlife. A saw-whet owl was discovered living in the tree in recent days.

Epping raptor rehabilitator Jane Kelly visited the property over the weekend and did not locate the owl or any eggs. She said it appeared that it likely took off as the tree was being prepped for removal.

The crew continued to work late into the day. Davis said he remained hopeful the entire tree would be down by dark.

'She was looking forward to being a mom'

Grief-stricken colleagues at Hampstead Animal Hospital are mourning the death of Dr. Joanna Lerner, who died from complications after the birth of her twin daughters.