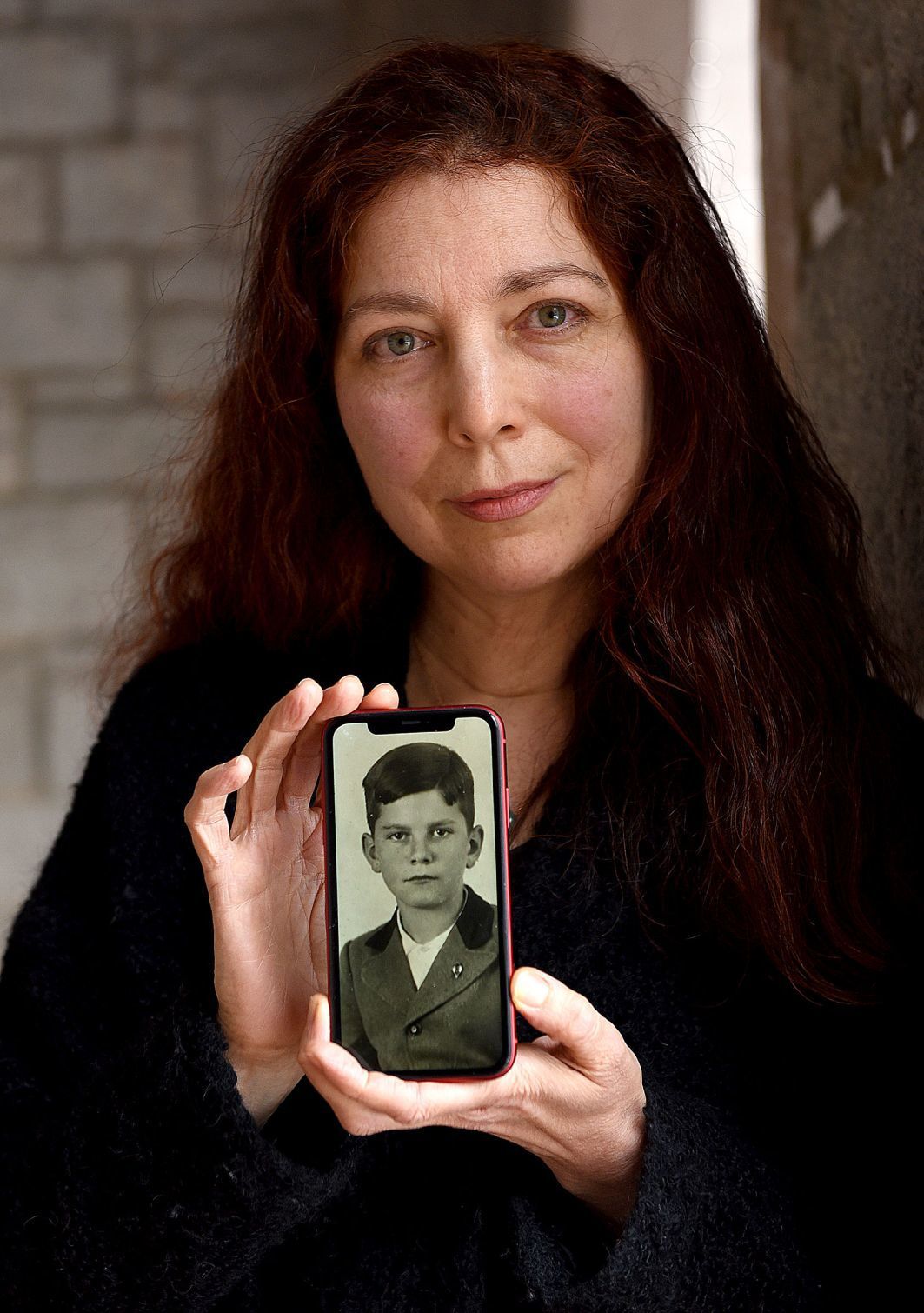 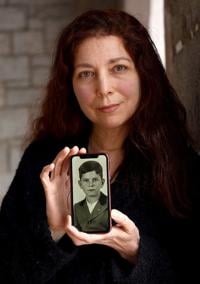 Author L. Annette Binder of Lyme holds the picture she discovered of her father in a Nazi Youth uniform in 1944. 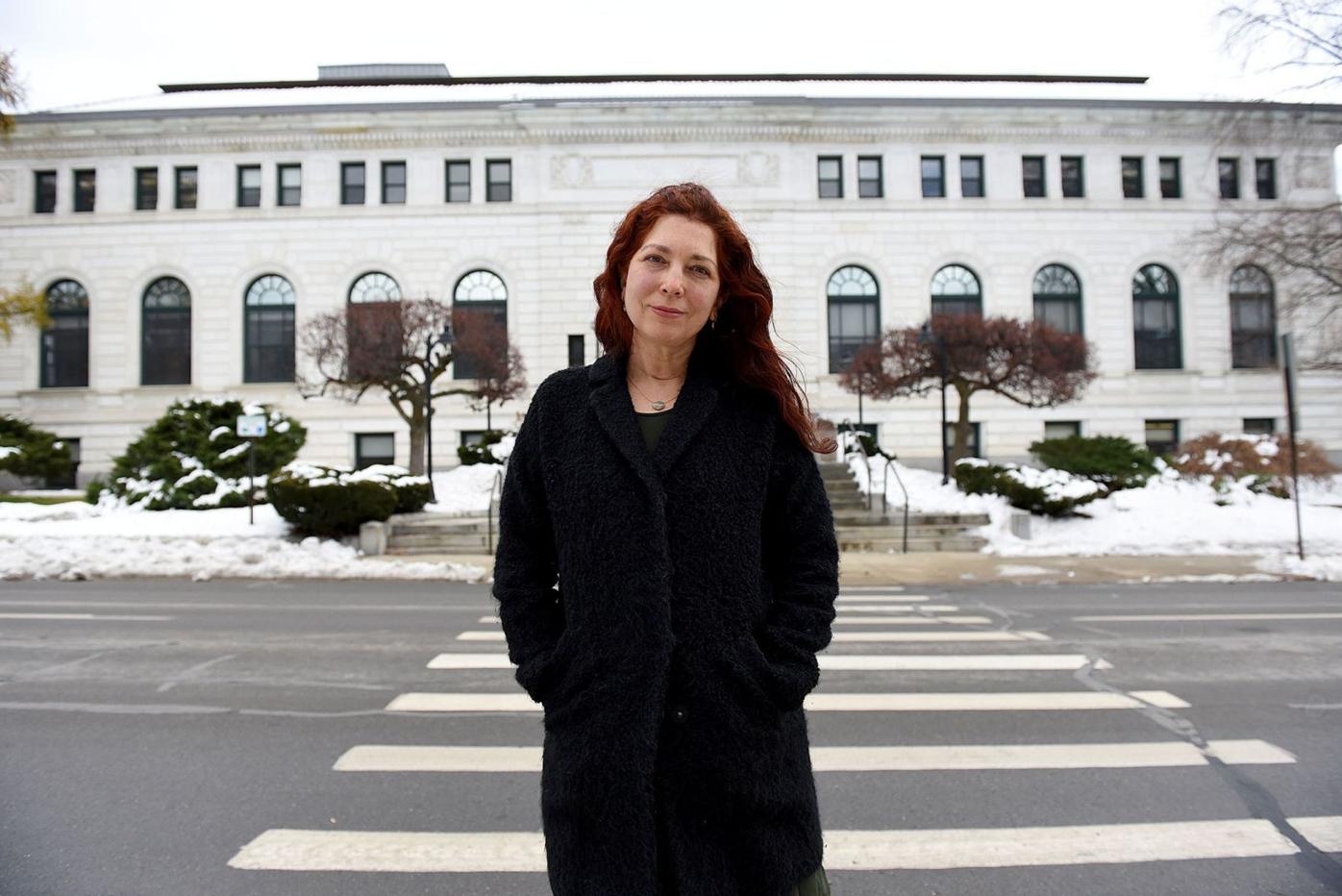 Author Annette Binder of Lyme poses in front of the City Library in Manchester in a visit in December. 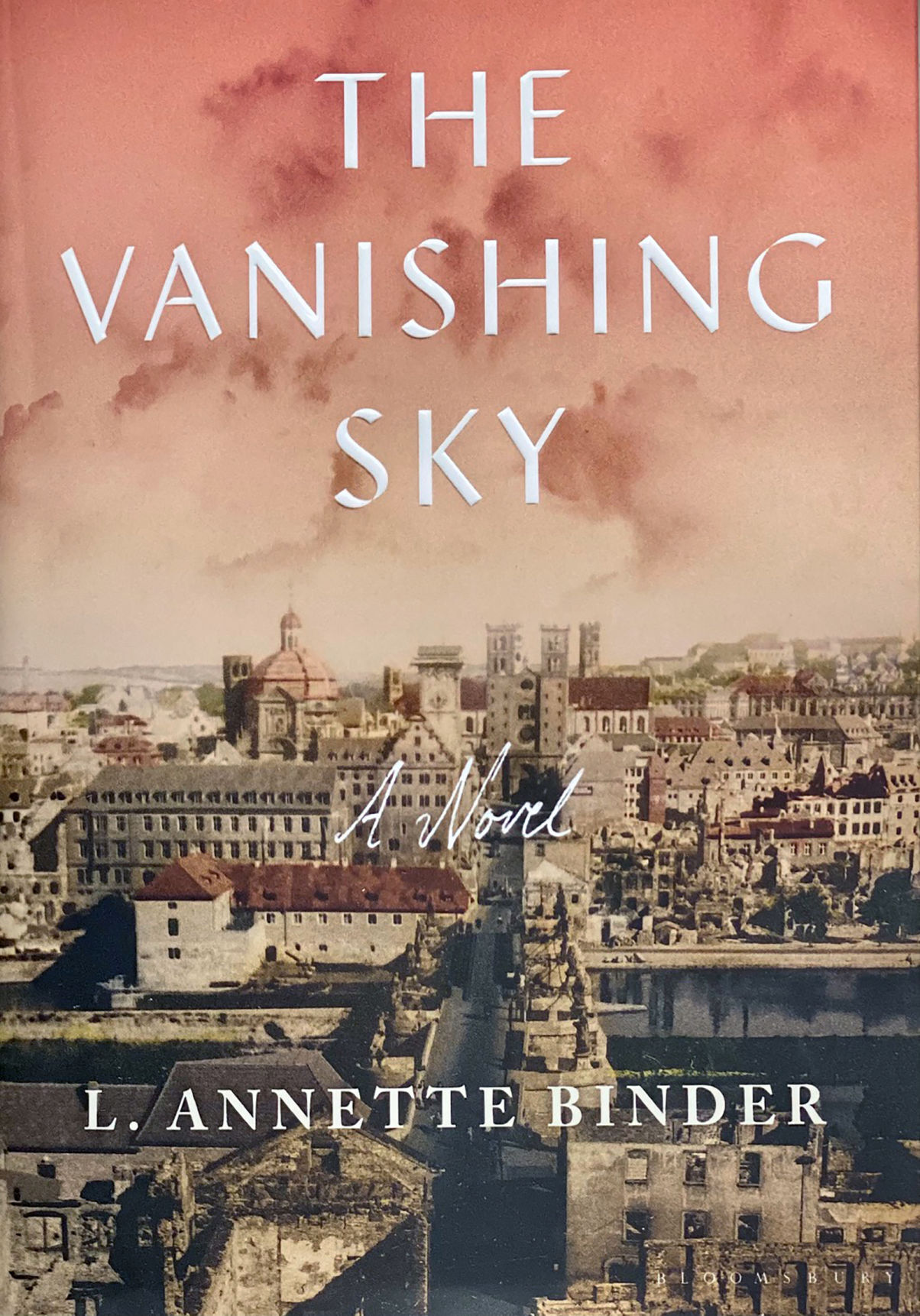 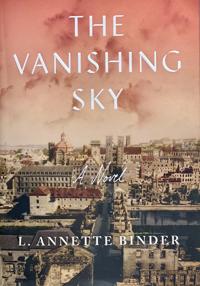 The cover of “The Vanishing Sky,” a novel by Lyme author L. Annette Binder, is a picture of the city of Wurzburg after it was bombed in 1945 at the tail end of World War II. 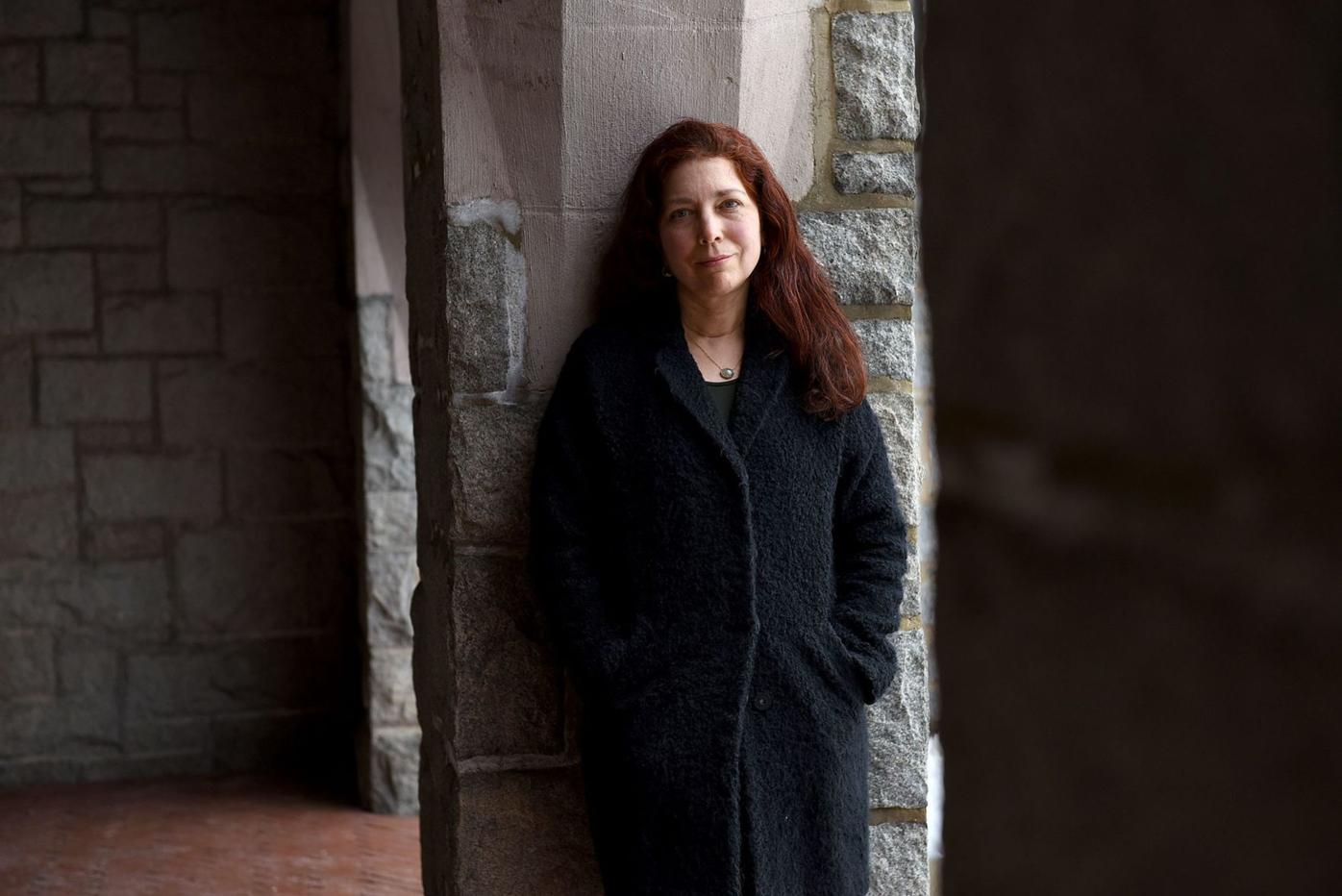 Annette Binder of Lyme is at the author of “The Vanishing Sky,” a book in part inspired by her own family history.

Author L. Annette Binder of Lyme holds the picture she discovered of her father in a Nazi Youth uniform in 1944.

Author Annette Binder of Lyme poses in front of the City Library in Manchester in a visit in December.

The cover of “The Vanishing Sky,” a novel by Lyme author L. Annette Binder, is a picture of the city of Wurzburg after it was bombed in 1945 at the tail end of World War II.

Annette Binder of Lyme is at the author of “The Vanishing Sky,” a book in part inspired by her own family history.

L. Annette Binder didn’t know her father had been in the Hitler Youth until she found a picture of him in uniform.

“I was gobsmacked,” said Binder of the 1944 image. “I wasn’t expecting to see this photograph, and even though I should have known on an intellectual level that he’d been in the Hitler Youth — it was compulsory for most boys by the end (of World War II) — it was still daunting to see.”

Binder, who was born in Marktheidenfeld, Germany, grew up in Colorado and now lives in Lyme, had been looking through a photo album of her father as a smiling young boy. But when she turned to the last page, there was an abrupt change. Only about 13 or 14 years old, her father was a cog in the Nazi regime.

“I knew it was him even before I flipped the picture and saw the date. Just from the sadness of his eyes. It was an expression he had his entire life. Even when he was joking around it never quite reached his eyes,” Binder said.

“It’s hard to know what he would have been like had his childhood not been the way it was. Years lost.”

Binder’s ensuing research into her family history, including accounts of her father’s desertion from military service, inspired and shaped the characters in her World War II-era novel, “The Vanishing Sky” (Bloomsbury Publishing) and speak to how “decent people can sometimes falter when confronted by evil.”

It’s a timely subject more than 75 years after the end of WWII. This month, footage of the crowd storming the U.S. Capitol in Washington on Jan. 6 has included a man in a black sweatshirt with the words “Camp Auschwitz” across his chest. Beneath it is a skull and the phrase “Work brings freedom.” It’s an English translation of a slogan Jewish people would have seen at the gates as they were marched into the infamous death camp in then Nazi-occupied Poland.

Peter McBride, director of the Cohen Center for Holocaust and Genocide Studies at Keene State College, said that’s a dangerous sign, and underscores the importance of books including Binder’s, which brings to life a ghostly homefront shrouded by both unwavering conviction and crippling doubt.

“It’s why people need to be so vigilant about these things creeping in,” McBride said. “There’s a sense of American exceptionalism, that it’s the biggest and the best and therefore something like this shouldn’t happen. But actually, it’s entirely predictable, and that’s what’s so frightening.

“In a country that fought against it in World War II, (to see anyone) using Nazi Regime symbols is worrying and troublesome,” McBride said. “Attitudes toward intolerance become normalized. It’s the danger of finding ourselves sleepwalking.”

Pieces of the pastBinder had earned a law degree from Harvard University and was working as an attorney when she decided to try her hand at fiction writing. She wrote two chapters, set against WWII, before setting it aside. Though her book wouldn’t be a memoir, Binder needed to fill in some gaps about her own family.

She couldn’t ask her father. He died when she was just 16. Gerd (or “George” as he was known in the U.S. because people had trouble pronouncing his German name) was just 53.

“My dad was a very quiet person. He kept things to himself. I think part of it could have been just his own personality and a part of it a larger silence in Germany among people of that generation,” Binder said. “In an era where we share so much — down to our meals on Instagram — in some ways it’s a hard thing to imagine a world where people don’t.”

She has memories of her grandmother. Though Binder immigrated with her parents to the United States, she went back to visit once a year or two up through middle school.

After her discovery, she dug through family photos, journals and documents, and learned what she could from her mother, Helena, in whom Gerd had confided, and her aunt Ute, who painstakingly transcribed Binder’s great grandfather’s journals. There were tantalizing snippets about Gerd running away from his post and trying to make it to his grandmother’s house, and some anecdotes, including interactions with American soldiers and their Lucky Strike cigarettes.

“He would pick up the butts from the ground and finish smoking them. That was a lifelong habit of his. He smoked most of his life, until just a few years before his death (at 53), as did his father, of lung cancer.”

Her search also yielded some sobering finds, such as her father’s “Racial Purity” notebook, something the Nazi regime required as proof — through town or church records — “that there was no Jewish blood” in an ancestral line.

“My father had filled that out. He managed to do it all the way back to 1919,” Binder said. “It just gave me chills to realize what this regime was doing to people in the country (and the sense that) everyone is watching at all times and that every part of your life was permeated by this.”

Binder also came across one of Gerd’s school-age notebooks. He was 9 at the time and practicing cursive writing.

To put it all into context, she scoured news reels, propaganda speeches and books, in particular the writings of Alfons Heck, one of the 8 million children who pledged their lives to the Third Reich. Heck rose from the Hitler Youth to the German high command and received an Iron Cross from Hitler.

In the 1991 HBO America Undercover documentary “Confessions of a Hitler Youth,” Heck describes how he and countless others were captivated by Hitler’s fiery nationalistic rhetoric of a “master race fated and entitled to rule the world.”

Though his French captors forced him to watch footage of the horrors inflicted at concentration camps, Heck said he scoffed, sure the scenes were staged.

“(Heck) was coming to terms with it all years later, and his work gave me some of those insights. He was surrogate in a way to those conversations I wished I’d had with my dad,” Binder said.

It’s been a long journey. Binder was in her early 30s when she started the book, and now she’s 53, the same age as her father when he died.

“I’d researched down to the last plane in the (British) Royal Air Force and all these raids, and then finally it was almost as if my characters shook me and said, ‘You need to write this.’ Put down the research. Put down the newspaper accounts, and just write the story.”

She has been in New Hampshire for six and a half years, where the rural setting proved a tranquil place to write. She and her husband, David, have an 11-year-old daughter.

“My mom is actually up here now, in memory care. Over the last couple of years, she has declined, but she still knows who I am and is very excited about the book. She’s always been my biggest cheerleader and in many ways the inspiration for the self-sacrificing character of Etta. I treasure those hours we spent chatting about her own life and what Dad told her.”

The characters in “The Vanishing Sky” are a composite of those stories and imagined storylines: In the last six months of the Third Reich, a mother has two sons serving in the war and a husband who chooses country over family. It’s an empathetic yet unflinching account one family’s participation — involuntary, unseen or direct — in the regime.

“Though I learned about (Gerd’s) life — he didn’t want to be part of the Hitler Youth and ran away from his post near the end of the war, his father was brutally strict and his brother was captured by Soviets — the stories were partial, and there was no telling how much was true and how much was family mythology,” Binder said.

It also represents a larger question about collective guilt and silence, something she said preoccupied her as she wrote her book. She hasn’t been back to Germany as an adult, largely because she needed to tell her story first.

“I wanted to stay in my chronological bubble. I wanted to stay in the ’40s and somehow the idea of seeing all these people walking around in their skinny jeans, holding their iPhones would not help me be in that world. I didn’t want to grapple with that.

But now, it’s time to put away the picture of her father in a Hitler Youth uniform, a sort of talisman she kept on her desk as she wrote. There will always be questions in her mind and conversations she wished she’d had, but her own novel — an imagined tale with some whispers of memories — is done.