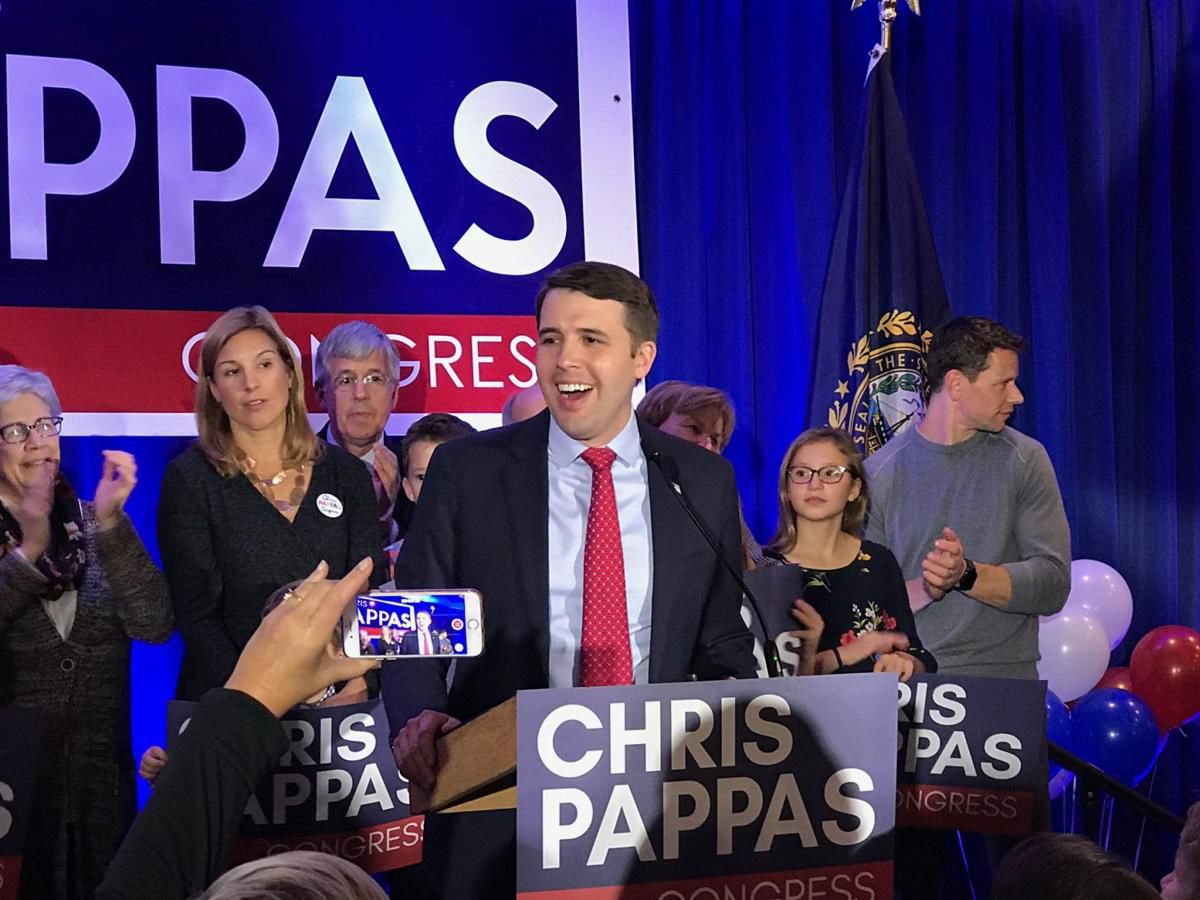 Chris Pappas speaks to supporters after his victory over Republican Eddie Edwards. Pappas was sworn in as U.S. Rep. for New Hampshire's 1st Congressional District Jan. 3, 2019. 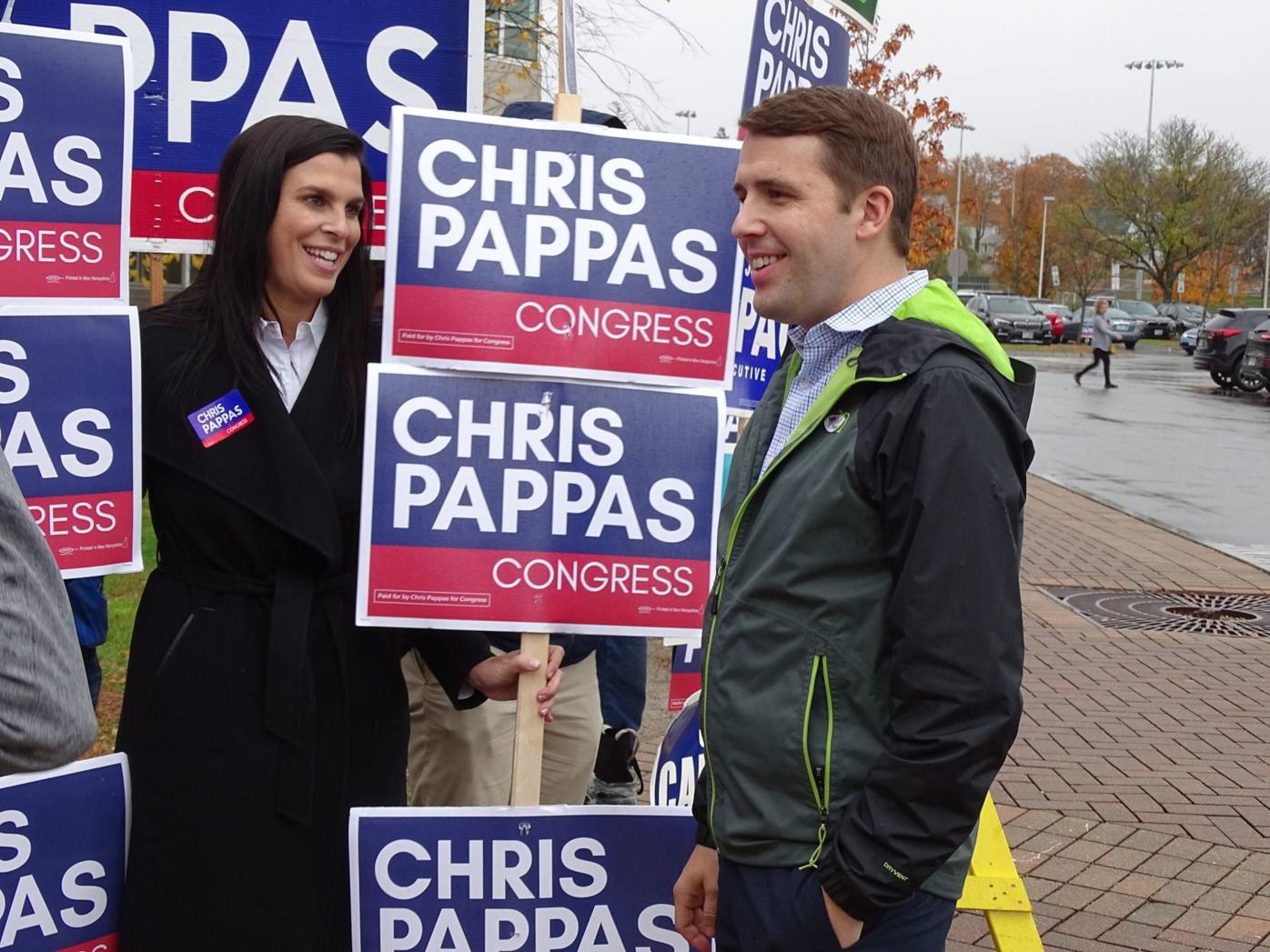 Chris Pappas speaks to supporters after his victory over Republican Eddie Edwards. Pappas was sworn in as U.S. Rep. for New Hampshire's 1st Congressional District Jan. 3, 2019.

“Today, voters right here in New Hampshire and across our country are delivering a strong message that when America is faced with a challenge, we don’t give up or give in to fear or anger -- we persevere,” Pappas told supporters at his campaign’s election night party at his family’s restaurant, the Puritan Backroom in Manchester.

With 92 percent of precincts reporting at 1:55 a.m. Wednesday, Pappas led Edwards 53 percent to 45 percent. Libertarian and past candidate Dan Belforti of Portsmouth had about 1.5 percent of the vote.

“Voters are clearly saying that it’s time to reject the division, deception and partisanship of the past two years, and it’s time to put the focus back on making progress for Granite Staters who deserve better," said Pappas.

"Whether you’re a Republican, independent, or Democrat; wherever you live, whatever your income, race or religion, and whomever you love, I will get up every day and work for all of you.”

“For years, Chris has been a good friend and effective partner in moving Manchester forward,” said Manchester Mayor Joyce Craig. “As a lifelong resident, a graduate of Manchester public schools and small business owner, Chris understands the challenges our community faces and has worked hard to address them. This is why I am thrilled that tonight, the people of the First Congressional District voted to elect him to Congress. I look forward to working with him to continue to make our state a better place."

"We have to respect the process,” said Edwards. “The voters have spoken. Chris won tonight, but we didn't lose. This is really about sending a message."

Pappas and Edwards spent the campaign highlighting their life stories and their commitment to key issues.

Pappas, a three-term member of the Executive Council, ran on promises to be a “check and balance” on the policies of President Trump on immigration, health care reform and gun control, along with other issues.

Edwards, the retired police chief and state liquor law enforcement executive, touted himself as a fresh and new leader, not fenced in by the ideas of career politicians.

Pappas is co-owner of the iconic Puritan Backroom, a popular Manchester eatery that’s been in business for over a century and employs more than 200 workers. After several terms in the New Hampshire House, Pappas went on to become Hillsborough County treasurer and then won a seat on the five-person executive council historically held by Republicans -- winning reelection to the post three times.

Pappas thanked the members of his “extended family” at the Puritan.

“Save an apron for me, I’ll be back at some point,” said Pappas.

Robert Sprague of Londonderry arrived early at the Pappas campaign reception at – where else – the Puritan. He sat taking in the early numbers with a plate of chicken tenders.

“I had to be here,” said Sprague. “He’s a businessman who promises to look out for us in Washington. History is happening here tonight.”

A U.S. Navy veteran, Edwards set up his own consulting business after ending his career in law enforcement. He worked for a time as a staffer in former congressman and mayor Frank Guinta’s Manchester office before running unsuccessfully for a state Senate seat in 2014.

Jamie Brassill of Manchester arrived early in the evening at the Edwards reception at the DoubleTree by Hilton Manchester Downtown Hotel.

"I feel that he presents himself well and I agree with the things that he stands for," she said.

Jonny Burgess of Bedford said Edwards checked off all the right boxes on his political scorecard.

“I’m huge into law enforcement, I love that," he said. “And he’s pro Second Amendment, a constitutionalist.”

He believes Edwards has a good future in politics.

“I think he’s established himself; his name is out there," Burgess said. "I think he’ll do good.”

Pappas won a convincing victory in the Democratic primary in September over his closest competitor, veteran and former Obama official Maura Sullivan, with 42 percent of the vote to Sullivan’s 30 percent. The other nine candidates finished in single digits.

The $4 million in private donations and tax credits needed to make Nashua’s new downtown performing arts center a reality has almost been reached, according to officials.

Merrimack parks reopened for public use after summer woes

Two weeks after Merrimack officials decided that a fence will soon be installed at Watson Park to prevent visitors from accessing the Souhegan River, the recreational facility is now reopened to the public.

Pandemic canceled Deerfield Fair, but not horse shows on the fairgrounds

Although the Deerfield Fair was canceled this year, the fairgrounds still has seen activity, with private horse shows and an upcoming “Taste of the Fair” event next month.

A Plymouth State University administrator told the Ashland Select Board Monday the school will no longer send students with COVID-19 to the Quality Inn, where positive cases and those exposed to the coronavirus have been sent since the school year started.