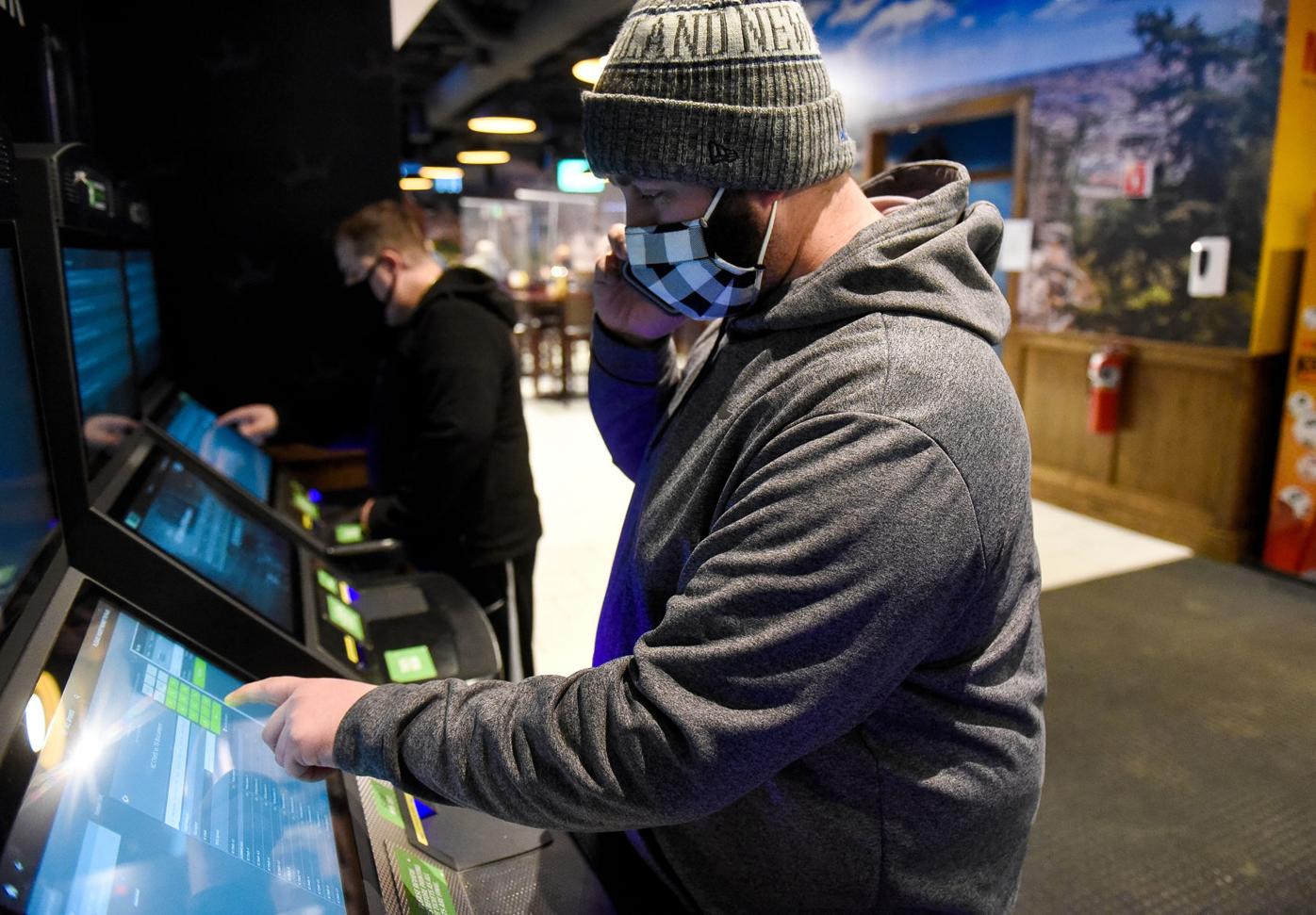 Kyle Hutton, of Methuen, Mass., places a bet on the Super Bowl at Filotimo Casino and DraftKings Sportsbook in Manchester. 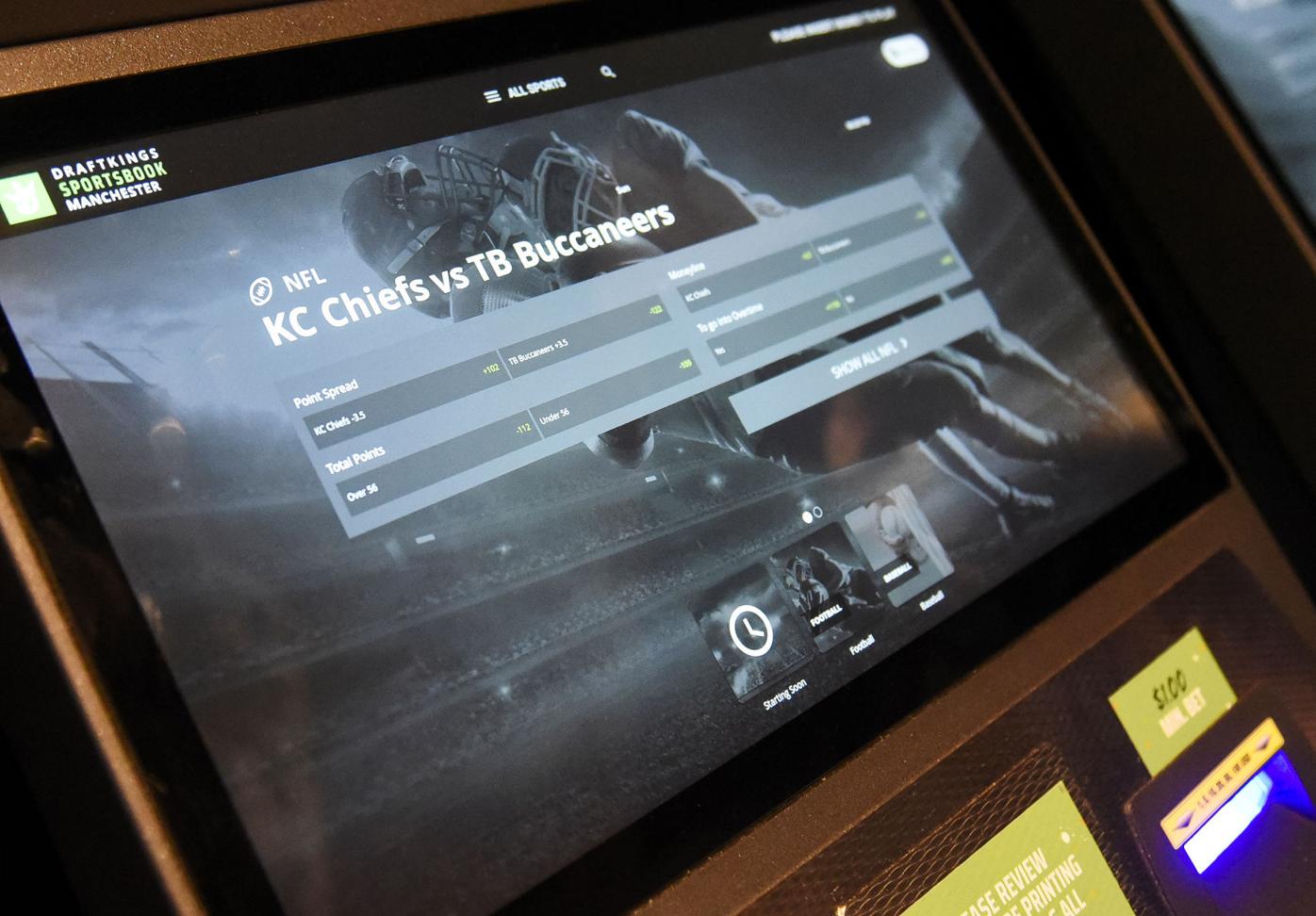 Across the state, including at Filotimo Casino, a DraftKings Sportsbook site in Manchester, bettors are putting their trust in Tom Brady and the Tampa Bay Buccaneers. 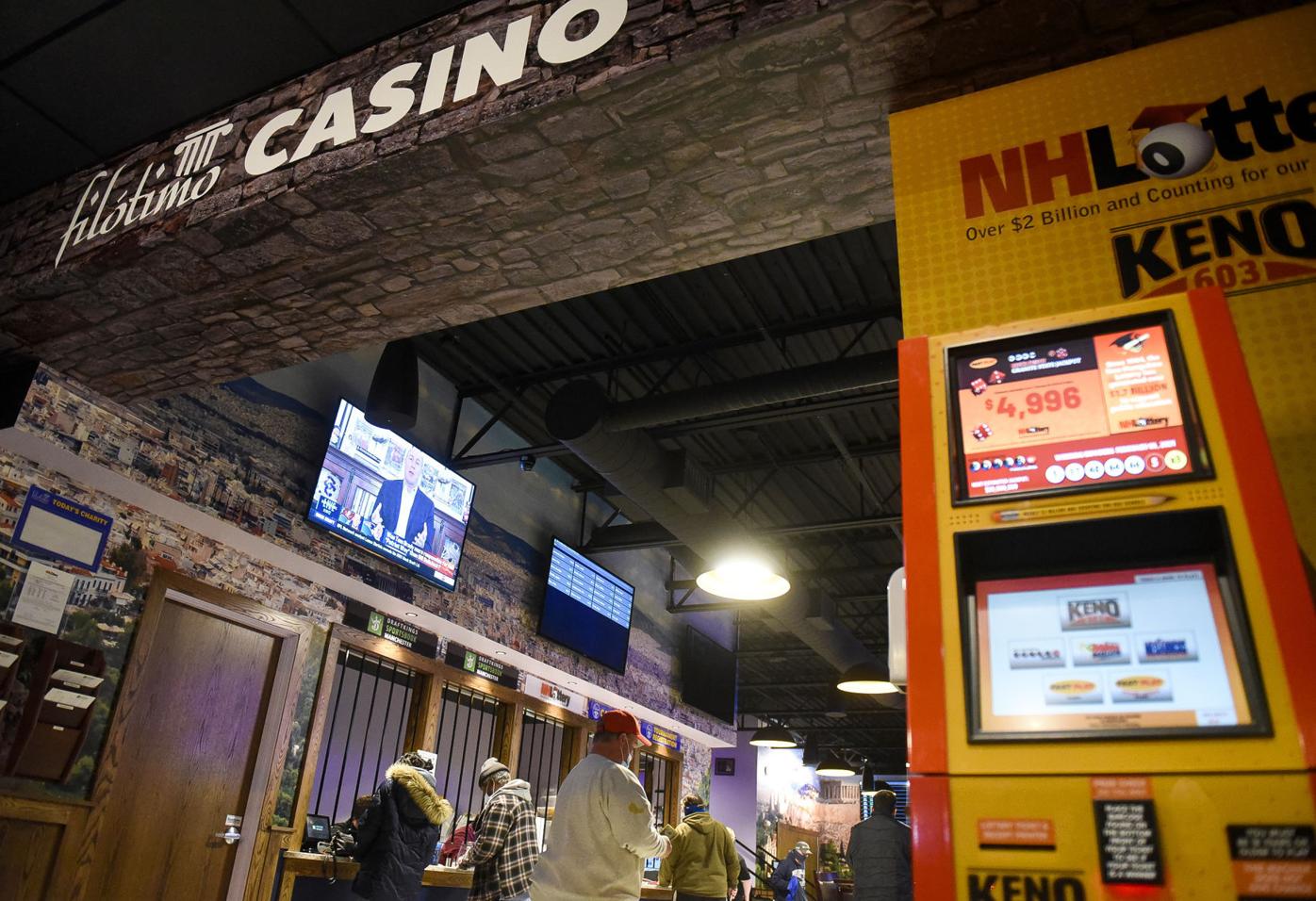 Kyle Hutton, of Methuen, Mass., places a bet on the Super Bowl at Filotimo Casino and DraftKings Sportsbook in Manchester.

Across the state, including at Filotimo Casino, a DraftKings Sportsbook site in Manchester, bettors are putting their trust in Tom Brady and the Tampa Bay Buccaneers.

Wearing a New England Patriots winter hat, Kyle Hutton used one of the electronic machines at the Draft-Kings Sportsbook in Manchester last week to place a bet on the Tampa Bay Buccaneers to win Super Bowl LV on Sunday.

“I can’t bet against Tom Brady,” said the 33-year-old from Methuen, Mass.

Hutton wagered $100 on a parlay — two bets in one — that will pay out if Tampa Bay beats the Kansas City Chiefs and the total score is over 56 points. He chose the moneyline bet — not using the point spread — for a potential payoff of about $450.

“I’ve been betting the whole postseason,” Hutton said. “I’m still playing on their money. Tampa Bay and Green Bay helped me out a couple of weeks ago.”

Legal sports betting has gained steam in the Granite State since launching during the NFL playoffs last year, though the state took a hit when the NCAA men’s basketball tournament, aka March Madness, was canceled.

Last year, sports fans in New Hampshire wagered more than $2.3 million on the Super Bowl, according to the New Hampshire Lottery.

More people are expected to place bets this year, now that the state has opened sports betting locations in Manchester and Seabrook and added digital options, according to Charlie McIntyre, the New Hampshire lottery’s executive director. As of Friday, more than 25,000 bets totaling $816,000 had been placed.

According to the American Gaming Association, 23.2 million Americans plan to bet a total of $4.3 billion on this year’s Super Bowl. Since last year’s game, 36 million more American adults have become able to bet in legal markets.

Like Hutton, many are placing their trust in Brady, with 74% of the money bet in New Hampshire on the Buccaneers winning outright — though Kansas City is a 3½-point favorite — according to DraftKings, which partners with the lottery on both digital and in-person sports betting.

Many took a risk on the Buccaneers early in the season with “futures bets.” Some are holding bets with 15-1, 17-1 or 20-1 odds for the Buccaneers to win the whole thing, he said.

McIntyre said that when the playoffs started, Tampa Bay was seeded fifth in the NFC. “They weren’t supposed to get out of the second round,” he said.

“We are seeing Bucs money up there,” he joked.

DraftKings reduced the odds on futures bets on the Buccaneers from a high of 25-1 as the season wore on.

“As the money came in on the Bucs, we lowered it. But it didn’t matter. They kept betting,” Avello said.

Avello expects at least a few six-figure betson the game from New Hampshire.

DraftKings offers dozens of proposition bets — wagers on specific events during the game that don’t directly affect its outcome — ranging from the coin toss to the last play.

“Proposition bets are something people have gravitated to mostly over the last 20 years,” Avello said. “They’ve become more popular, and there are more of them.”

In New Hampshire, the most popular bets are on the outcome of the coin toss and whether Brady will be the game’s MVP or have more than 0.5 rushing yards.

In MVP betting, Brady leads Chiefs quarterback Patrick Mahomes by more than 30% of the amount wagered, according to DraftKings.

Former Patriots tight end Rob Gronkowski, who plays for the Buccaneers, is the favorite to score the first touchdown.

Brady, Gronkowski and Mahomes are the three players seeing the most betting action in New Hampshire.

Some of the novelty prop bets include whether any scoring drive will take less time than the singing of the National Anthem, what the first Gatorade color dumped on the winning coach will be and the “doink special” — whether any field goal or extra-point attempt will hit the goalpost uprights or crossbar.

Several others used the machines alongside Hutton to place bets at the Sportsbook last week, but half a dozen people were waiting in line to process their bets with a sportsbook writer.

“We’ve seen an uptick in customers coming in to place bets in the Super Bowl,” said Dick Anagnost, owner of Filotimo Restaurant & Casino. “Business is brisk because of it.”

He planned to bring on extra writers leading up to today’s game.

“A lot of people wait to bet that game until the very end to wait for all the information to come in,” McIntyre said. “They are still waiting to hear if so and so are feeling well. Is it going to rain in Tampa Bay? Here it’s been more about the heart and the fandom of Tom Brady in New Hampshire.”

Early in the NFL season, many placed bets on the Patriots.

Hutton is glad to see Brady in another Super Bowl even though it’s not with the Pats.

“With another team it kind of stinks, but he was the greatest,” he said. “They should have paid him the money.”

Hutton said he spends most of game day enjoying the action on the field, not pondering his bets.

“I start thinking about it near the end,” he said.