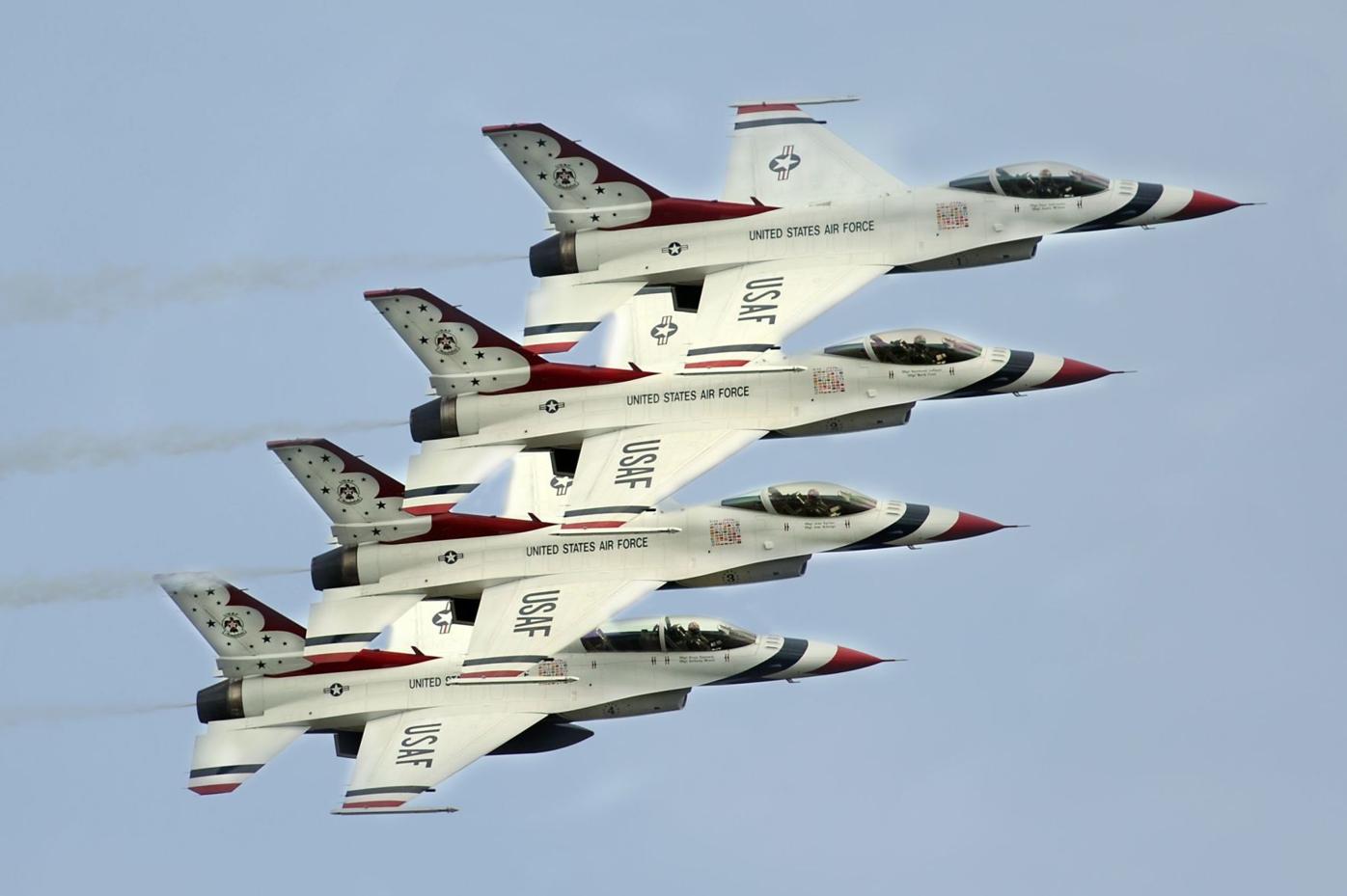 The U.S. Air Force’s Thunderbirds will be the stars of the show Sept. 11-12 when the New Hampshire Air National Guard hosts its first air show at Pease ANG Base in more than a decade. 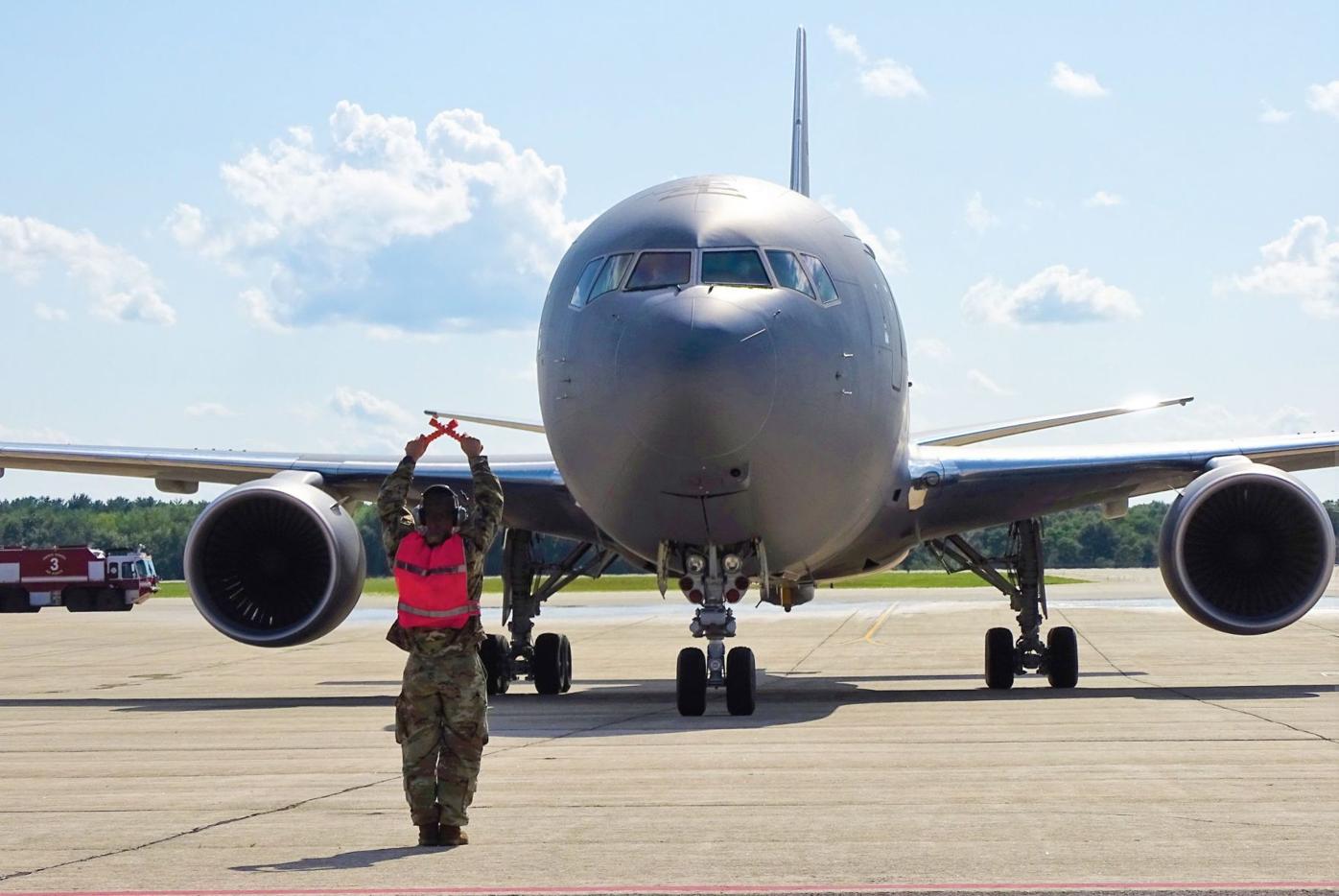 A ground crewman guides the first KC-46A Pegasus tanker to arrive at Pease Air National Guard Base to its parking spot in August 2019. The 157th Air Refueling Group now has 12 of the new tankers, and the public will have a chance for an up-close look at them at the Guard’s air show at Pease on Sept. 11-12.

The Thunderbirds are coming to New Hampshire in September, when Pease Air National Guard Base hosts its first air show in more than a decade.

“Not everyone who puts in gets them,” she said. “It’s a competition. You have to write up a justification; you’ve got to show you’re really serious about putting on an air show.”

So, on the 20th anniversary of the terrorist attacks on New York City and the Pentagon, the New Hampshire Air National Guard will host “Wings Over New England — Live Free or Die,” featuring aircraft and technology from around the country.

Admission is free but you might have to put up with some traffic to get in, Van Splunder said.

Van Splunder was a cadet at the Air Force Academy in Colorado when the Sept. 11 attacks happened. “My entire military career has been post-9/11,” she said. “The majority of the people putting on this air show have never been in a peacetime military.”

Pease is home base for the 157th Air Refueling Wing, whose members were activated right after the attacks, Van Splunder said. “They went from being a peacetime Air Force overnight to a 24/7 operation with no notice,” she said.

The Pease air show will open with a solemn remembrance ceremony for those lost on Sept. 11, Van Spluder said. “Just to remember where we all come from and remember who came before us,” she said. “And make sure that we never forget.”

Van Splunder is an intelligence analyst for the Air Guard. About two years ago, she “accidentally volunteered” to direct the air show. “It’s an intimidating event to plan, not to mention it’s an expensive event to plan,” she said. And countless regulations have to be followed.

But air shows are invaluable tools for community outreach and recruiting, Van Splunder said. It’s about attracting a new generation to serve, she said.

The Pease air show will feature a STEM event featuring interactive exhibits aimed at middle and high school students. The ANG has invited FIRST Robotics and Lego League to demonstrate their robotics programs, and visitors can try out a number of flight simulators.

“It’s all about connecting science, technology, engineering and math with Air Force specialty codes,” said Van Splunder, who is an intelligence analyst for the Guard when she’s not organizing an air show.

Her team has relied on official channels to pull in exhibitors for the show, but Van Splunder said they also tap personal connections to convince colleagues to participate. “It’s a lot of friend-calling and favors,” she said.

And of course, it’s a chance for the New Hampshire ANG to feature its new KC-46 Pegasus refueling tankers, said Van Splunder.

The 157th has 12 of the new tankers, and she said, “We’re going to have as many of them as possible on the ramp. They’re bright and shiny new tankers we’re excited to show off.”

They’ve also invited their comrades in the Army National Guard to come and show off their stuff as well.

The last time the Air National Guard hosted an air show here was in 2007, Van Splunder said. The last air show at Pease was held in 2012 at the Portsmouth International Airport and featured the U.S. Navy’s Blue Angels.

Van Splunder said organizers are working closely with public health officials to make sure all COVID restrictions are followed. “We’re not pretending there’s not a pandemic, by any means,” she said.

All events will be held outside. STEM activities will be in a hangar with the doors open. “Honestly, it’ll be the perfect opportunity to socially distance,” she said.