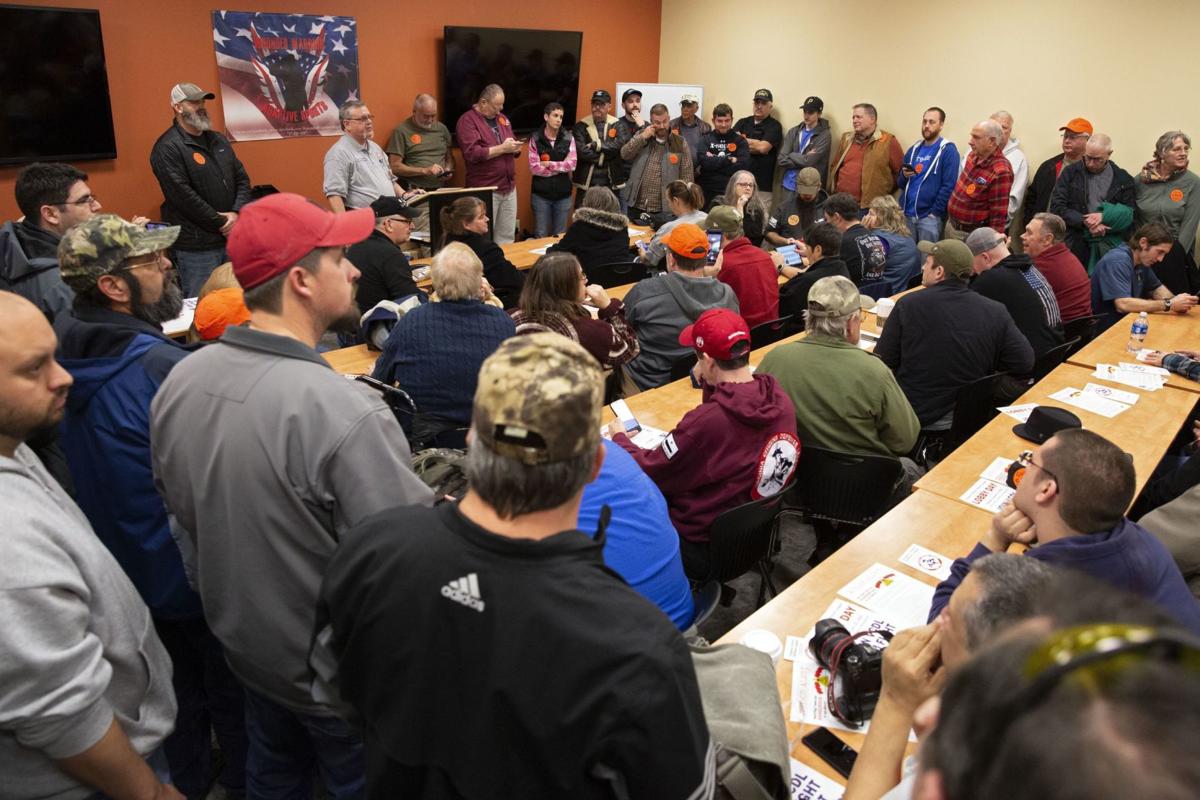 Gary Moeller answers questions on Jan. 17 at the Freedom Shooting Center in Virginia Beach, Va., where gun owners made plans to join thousands of other activists at a rally in Richmond, Va., on Jan. 20. 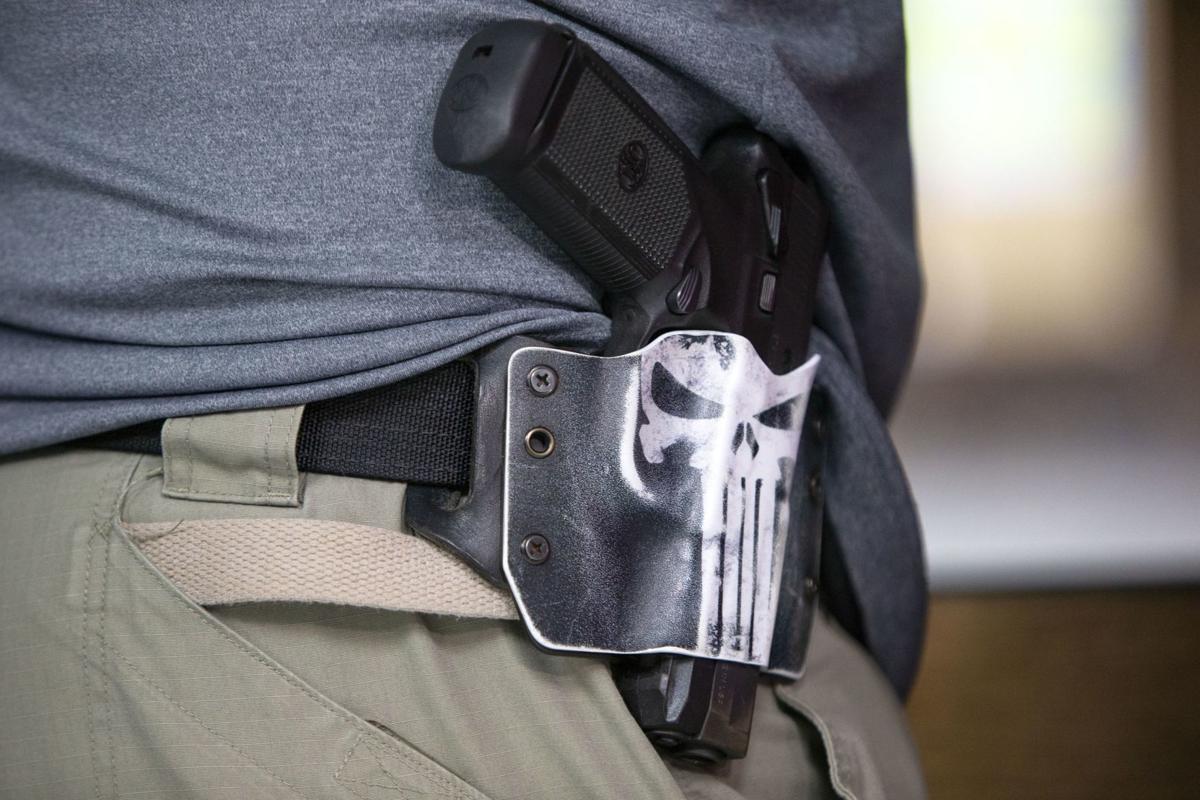 Supporters of the Virginia Citizens Defense League shoot targets on Jan. 17 at the Freedom Shooting Center in Virginia Beach, Va., before an organizing meeting for the rally.

RICHMOND, Va. — The convoys and militias are coming, if social media posts are to be believed, headed to Virginia’s capital on Monday to take a stand for gun rights — or, in the words of some, to fan the flames of a civil war.

“I’ll be rolling into town early. I can’t give you my exact time for security reasons,” said Christian Yingling, head of the Pennsylvania Light Foot Militia and a leader at the “Unite the Right” rally in Charlottesville in 2017.

“I organized a convoy, places we can meet up and drive up together. I’ll be leading it,” said Tammy Lee, a militia activist from Oklahoma.

Both Lee and Yingling were members of groups that signed consent decrees never to return to Charlottesville while armed, part of a lawsuit settlement over the violence there. But there is no restriction against coming to Richmond.

Thousands will join them, they say, for a rally Monday on Capitol Square to protest plans by the new Democratic majority in the General Assembly to pass gun-control laws. State and federal officials were preparing for a volatile mix of weapons, passions and anti-government fervor.

That was before President Donald Trump decided to weigh in Friday afternoon on Twitter.

“Your 2nd Amendment is under very serious attack in the Great Commonwealth of Virginia,” Trump tweeted. “That’s what happens when you vote for Democrats, they will take your guns away. Republicans will win Virginia in 2020. Thank you Dems!”

Gov. Ralph Northam, a Democrat, last week declared a state of emergency and issued a ban on firearms or other weapons on Capitol grounds. The state Supreme Court upheld the ban after a challenge by two gun rights groups. The Federal Aviation Administration has issued temporary flight restrictions for Richmond airspace, making it illegal to fly planes or drones above the city on Monday. Northam has said officials are concerned about threats from weaponized drones.

On Thursday, the FBI arrested three alleged members of a white-supremacist group on gun charges, in part out of concern that they planned to attend the Richmond rally and incite violence.

The Virginia Citizens Defense League, a pro-gun advocacy group, sponsors what has always been a peaceful rally every year on Lobby Day, which coincides with the state’s Martin Luther King Jr. holiday. With children out of school and state offices closed, it is a time for citizens to come to the Capitol and lobby lawmakers on a variety of issues.

The pro-gun rally is always the most visible event, but this year it has virtually wiped out everything else. The Virginia Citizens Defense League has appealed for 10,000 supporters to show up unarmed to fill Capitol Square and asked several times that many stand outside with weapons.

Northam told all nonessential staff to stay home, and many lawmakers urged aides to stay away, though committees will still meet and both chambers will convene floor sessions. The young pages who run errands in the House and Senate were given the day off for safety.

The Coalition to Stop Gun Violence canceled its annual vigil and lobbying day, announcing the decision on Twitter “with a heavy heart.” The organization’s state director, Lori Haas, said it was because of “ongoing, credible threats to public safety that have been promoted . . . by gun extremists.”

One of Richmond’s staunchest gun rights Republicans, who needled Northam over the ban earlier in the week, closed ranks with the governor after a closed-door briefing on the security threats Friday.

“Any group that comes to Richmond to spread white supremacist garbage, or any other form of hate, violence, or civil unrest isn’t welcome here,” House Minority Leader Todd Gilbert, R-Shenandoah, said in a written statement Saturday. “While we and our Democratic colleagues may have differences, we are all Virginians and we will stand united in opposition to any threats of violence or civil unrest from any quarter.”

Gilbert declined to discuss the content of the briefing, but his statement referred to efforts to “infuse” the event with a “twisted or extreme worldview.”

Outside the Capitol, authorities used tall chain-link barriers to create a pie-shaped pen for the rally. The area takes up about a third of Capitol Square, a manicured park dotted with monuments to historical figures ranging from Native Americans and George Washington to a segregationist governor and civil rights leaders.

The square is usually open on all sides to foot traffic. Under Northam’s emergency order, access is restricted to one spot, at Ninth and East Grace streets. Just inside that entrance, the crowd will be split into 17 lines for screening with metal detectors.

Anyone attempting to bring in weapons will be turned away, but police will not confiscate those items, officials have said. Demonstrators who do not want to part with their guns may remain armed on city streets. Authorities say they will cut off admission to the rally once the crowd hits a certain number, which they have declined to disclose.

Police expected rallygoers to start lining up Sunday night, despite freezing temperatures. Authorities are setting up two medical tents in the area in case of injuries.

The hoopla is focused on promises by Northam to enact sweeping gun control this year, including limiting handgun purchases to one per month, banning military-style weapons and silencers, allowing localities to ban guns in public spaces and enacting a “red flag” law so authorities can temporarily seize weapons from someone deemed a threat.

Democrats across Virginia ran on the promise of gun control in last year’s legislative elections, winning majorities in both the House of Delegates and state Senate for the first time in a generation. That gives them the power to act — and has inspired outrage from pro-gun activists.

More than 110 counties, cities and towns around the state have passed some type of resolution in support of gun rights, many of them “Second Amendment sanctuary” proclamations in which local officials pledge not to enforce laws they see as unconstitutional.

National militia and extremist groups have mobilized, with some making threats against elected officials. Many promise to use Virginia as the place to take a stand against what they see as a rising tide of anti-gun sentiment, invoking language of insurrection and civil war.

Not all of the heated rhetoric has come from outsiders.

Sen. Amanda Chase, R-Chesterfield, who plans to speak at the rally, warned on Facebook that authorities might send a troublemaker into the crowd — a “government plant,” she said — to cause a disruption as an excuse to arrest attendees on “domestic terrorist” charges.

Yingling, the Pennsylvania militia activist, said he believes turnout will be big. “God, I hope it happens,” he said in a telephone interview. “Like it or not, the governor’s trampling on the rights of millions of gun owners. . . . People are upset, and they should be. He’s talking about people’s right to defend themselves.”

Yingling led his militia on the streets of Charlottesville for the rally there in 2017. He said they were not backing the neo-Nazis who defended the statue of Gen. Robert E. Lee, but were protecting the rights of all involved to exercise free speech. Monday’s rally is another case of the Constitution under siege, he said — this time over gun rights.

And yes, Yingling anticipates violence. He blamed Northam for pushing to limit access to guns.

“Let me make one thing unequivocally clear: I do not advocate for violence ever, ever,” Yingling said. “But if he [Northam] keeps pushing people, people are going to feel that they’re not going to have another choice.”

Yingling said law enforcement has been in contact with him ahead of the rally, but he declined to disclose what they talked about.

Lee, the convoy leader from Oklahoma, has promoted the Richmond rally in Facebook live videos. “I can absolutely not wait,” she said in one. “This may possibly be the first time that almost the entire patriot movement is there.”

WASHINGTON — House Speaker Nancy Pelosi said on Wednesday she wants to virus-proof the November election by including funding to boost voting by mail in the next pandemic response plan being put together by Democrats in the House of Representatives.

WASHINGTON — President Donald Trump said on Wednesday that Iran or its proxies planned a sneak attack on U.S. targets in Iraq and warned they would pay a “very heavy price” but gave no details.

WASHINGTON — Republican lawmakers signaled caution on Tuesday over Democratic plans to prepare another large spending bill to battle the coronavirus crisis, even as President Donald Trump called for $2 trillion in spending, this time on infrastructure.

A Dutch cruise ship that has been in limbo since cases of the coronavirus were confirmed onboard faces an uncertain welcome at its planned destination in Florida, where the governor says he does not want sick passengers “dumped” on the state.