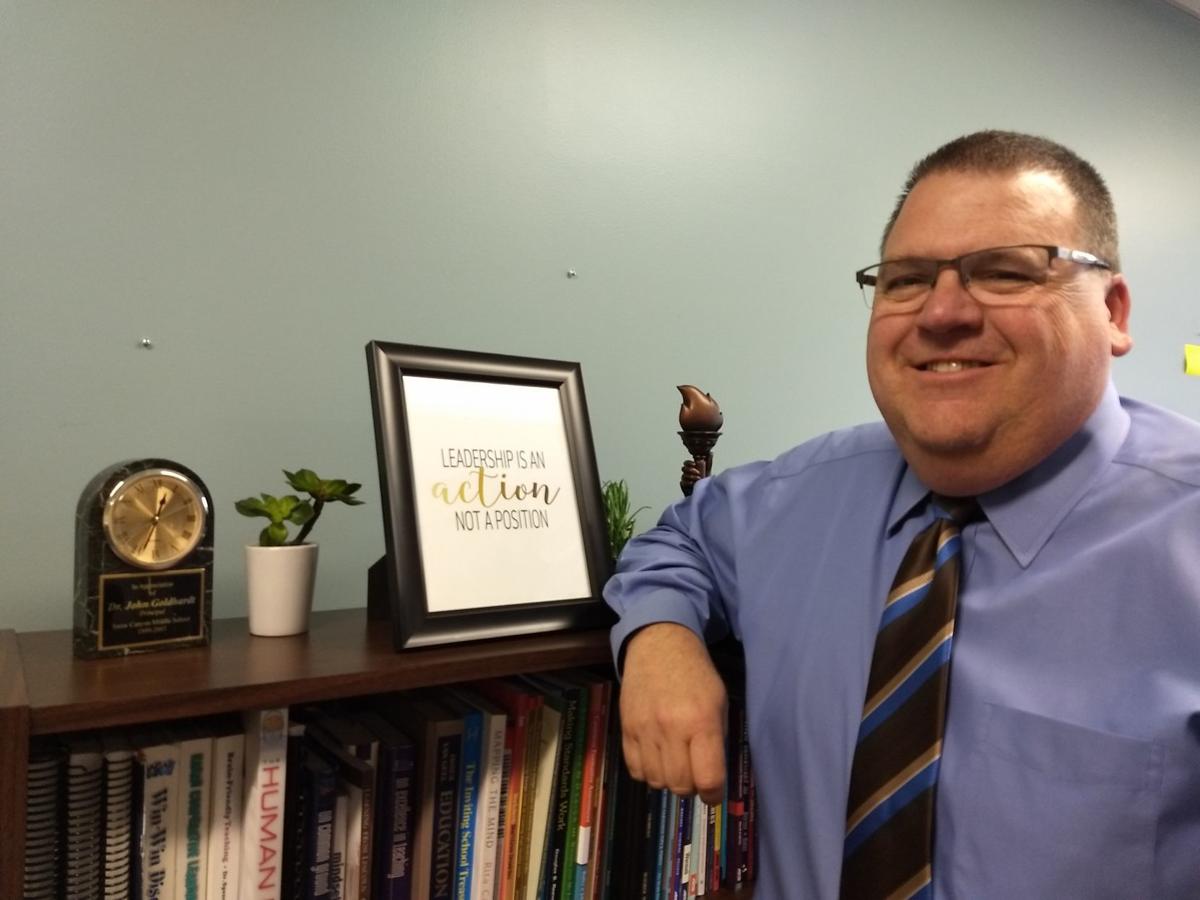 John Goldhardt was hired as Manchester’s new superintendent of schools in July.

Those words were uttered in frustration by Mayor Joyce Craig toward the end of last week’s school board meeting; a motion to add an inspirational quote to board agendas had failed on a roll call vote.

The quote, “Are the decisions we’ve made here today good for our learners?” attributed to SNHU President Paul LeBlanc, was given to each of the school board members on little note cards by Superintendent of Schools John Goldhardt a few meetings earlier.

Board member Leslie Want of Ward 4 was so moved by the message, she moved to have the quote added to board agendas.

“I was struck when Dr. Goldhardt gave that to us,” said Want. “It’s always been about that. Every decision that we make should take into consideration students first, and everything else second and last. I thought that would be a really good reminder. I’d like to not only see that as the header on every board agenda, but as the footer on every page. So that as we’re going through our agenda, we get a constant reminder all meeting long that we’re here to do our business for students of this district.”

The motion fomented more debate than one might expect.

Want offered to take off the attribution, and place only the quote itself on the agendas. “I think just the reminder itself is what I’m interested in,” said Want.

“I just want to make the point that learners would also be the parents and the taxpayers, and not only the students, so what comes out of this information?” said Ward 8’s Jimmy Lehoux. “Just because you may not agree with it doesn’t necessarily mean it doesn’t affect our learners, because we are educating the public about what is happening in our school district. So yeah, I believe it’s low-hanging fruit. I guess if you want to put it on there, I guess we can, but I’m not really sure what it does.”

At-large board member Rich Girard pointed out the motion would require a two-thirds vote for approval, because it involves amending the board’s rules regarding agenda preparation.

“I really think we’re blowing this out of proportion,” said Craig. “It’s something Dr. Goldhardt brought forward with goodwill to all of us as a reminder, and I think that’s what Committeeman Want has done here as well.”

“Well she can sit there with a little sign in front of her, or you can have it there, but to start amending the agenda for every jingle somebody wants to do is crazy,” said Girard.

“I just think this is a really sad night, that we’re arguing about putting words on that we should be reminded of,” said Craig.

That’s a 9-4 in favor, below the two-thirds threshold for passage.

By week’s end, Craig remained mystified by the vote. “I’m not sure why we wouldn’t want to start every school board meeting with a reminder that we are here for our students,” said Craig. “I believe that if school boards are serious about improving student achievement, anyone watching our meetings should be able to tell. Small reminders, such as a quote asking us to make good decisions for our learners, should be ingrained in our legislative process. If we include reminders, however little they may be, over time, they begin to sink in.”

City aldermen are expected to vote this week on a request from the school board for a special supplemental appropriation of $3,250,000, to access additional money available to the school district as part of the budget compromise passed last month.

The amount available to city schools totals about $3.5 million, but school officials want to set aside $250,000 for items like unanticipated Medicaid costs.

Goldhardt told school board members he is interested in using the money to set up a comprehensive reading program in elementary schools.

New voters may continue to register until election day.

For those interested, here are the numbers out of the city clerk’s office for votes cast by party in the municipal primary election last month:

A new feature has launched on the Manchester Transit Authority (MTA) website that allows users to see if a school bus is running late. Go to www.mtabus.org, and look under the “alerts” section for details.

School board members were told last week that this is a new feature and MTA officials will continue to improve on it. Right now, the information is updated in real time by someone working in dispatch, but the goal is to have the system automated in the near future.

City aldermen are expected to take a final vote Tuesday on a request from the director of Manchester-Boston Regional Airport to restructure three bond obligations, which officials say could draw more airlines to the Granite State.

Manchester-Boston Regional Airport Director Ted Kitchens made the request to avoid possible cost increases in fiscal year 2021 and 2022 by luring additional airlines and increasing growth by reducing cost per enplanement (CPE) fees. CPEs are the total cost an airline pays an airport for landing fees, gate rentals and other charges, divided by that airline’s passenger total.

Such fees are considered part of an airline’s cost of doing business and are incorporated into the price of tickets.

Kitchens told aldermen last month that Manchester-Boston Regional Airport (MHT) currently has the sixth-highest CPE of any airport of comparable size in the country. Right now, Kitchens says, MHT’s CPE is $14.35. With the debt restructuring, the figure could fall below $11 in the next five years.

Craig announced she will host the second annual Halloween at City Hall event on Oct. 31. From 3 to 5 p.m., children and parents are invited to come to City Hall to pick out a free book from the Bookmobile, meet the mayor, grab a treat and show off their costumes.

“I’m excited we’re able to host Halloween at City Hall again this year,” said Craig in a statement. “With support from the Manchester School District and Manchester City Library, the Bookmobile will be here to hand out free books to everyone that stops by.”

Weather permitting, the event is scheduled to take place in City Hall Plaza, 900 Elm St. In case of poor weather, Halloween at City Hall will be held in the Aldermanic Chambers.

With heavy rain forecast for overnight, the National Weather Service in Gray, Maine has issued a flood watch for portions of southern New Hampshire, including the Seacoast, through 3 a.m. Sunday.

NORTH CONWAY — Memorial Hospital is making sure every child in its community who wants a ski helmet, gets one.

Hints from Heloise: A warning about deer

A Derry reader writes in.

Tech Q&A: How to migrate data from a Windows 7 PC to a new Mac

BAGHDAD - Iraqi security forces fired on protest camps across the country Saturday as a leading cleric withdrew support for the months-old movement, raising the prospect of greater violence and bloodshed.

CONCORD - A 46-year-old Campton man faces numerous charges after police say he fled a traffic stop on I-93 Friday night and was captured by a state police dog on the bank of the Merrimack River.