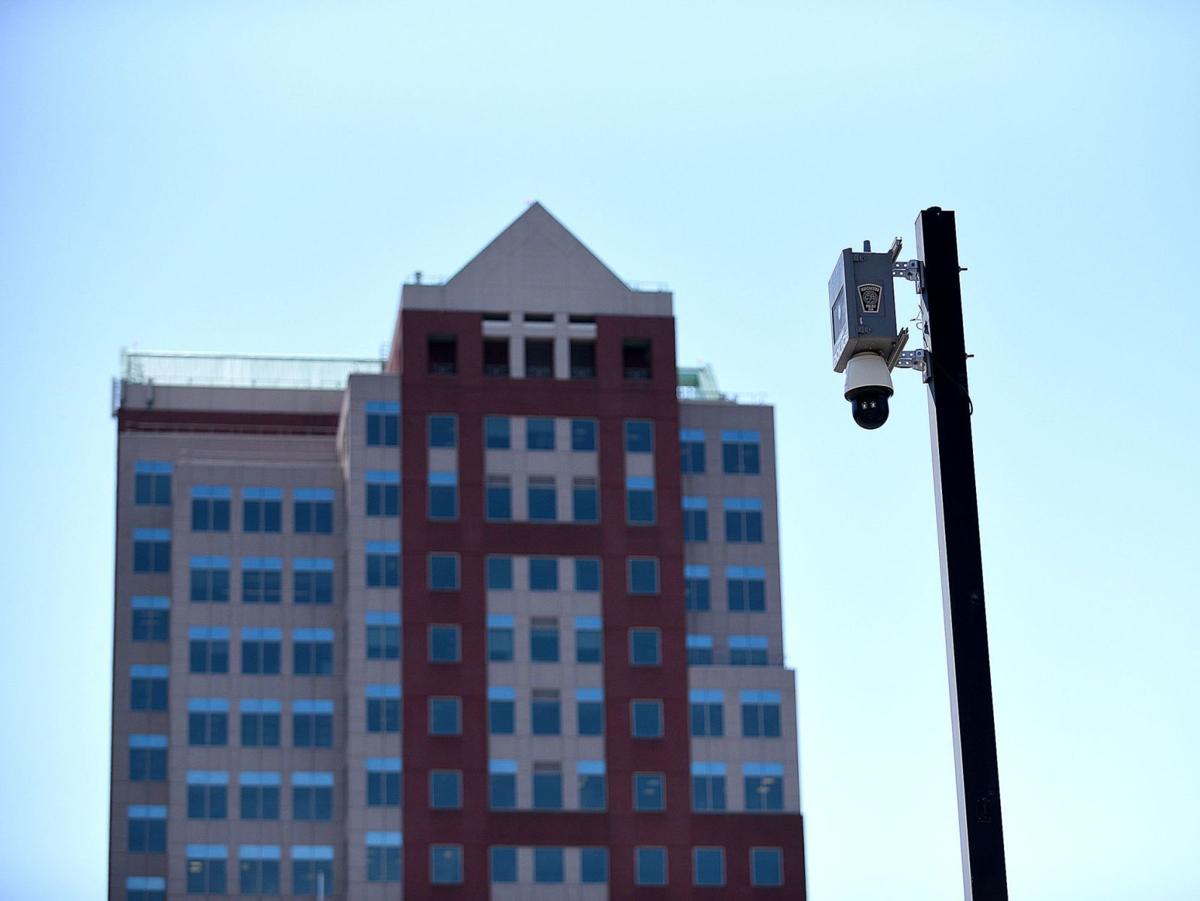 Manchester Police have a camera set up in downtown Manchester at the corner of Elm and Mechanic streets.

THE RECENT announcement by Police Chief Carlo Capano that his department is installing surveillance cameras to monitor activity on Elm Street in downtown Manchester continues to raise questions among city officials.

At a meeting of the Manchester Police Commission earlier this month, Capano said the permanent cameras will go up in the area of City Hall and look north and south on Elm Street, with a live feed transmitted to police dispatch.

That raised eyebrows among city aldermen, some of whom say they learned of the proposal through reports in the press.

Mayor Joyce Craig points out she first mentioned the cameras to the Board of Mayor and Aldermen (BMA) during brief comments under the “New Business” portion of a meeting on April 2, the night before Capano discussed the proposal with the police commission.

According to draft minutes of that meeting, Craig told the aldermen, “The police department is also putting two permanent cameras in the area of City Hall that can basically see far and go close up to keep an eye on what is going on on Elm Street. It will go directly back to dispatch.”

“Chief Capano and I speak on a regular basis,” Craig told the Union Leader last week. “In responding to requests from downtown business owners, Chief Capano informed me the Manchester police department was considering using cameras to deter, document and reduce crime on Elm Street. This is in addition to increasing the number of police officers patrolling downtown. I shared this information with the BMA and the public at the April 2nd meeting during an update on downtown activities, which preceded the police commission meeting.”

A rally was held outside City Hall earlier this month in opposition to the cameras. The event, titled “1984 is not an Instruction Manual,” drew roughly 40 participants.

In an effort to clear up those concerns, Capano gave more details about his proposal last week.

For months, downtown merchants and some aldermen have complained about the presence of homeless people and panhandlers on downtown sidewalks.

“We’ve had a lot of complaints and requests for more of a presence down along Elm Street because of criminal activity,” said Capano. “So we started thinking a little outside of the box and we’ll be putting the cameras outside of City Hall so we can monitor the north and south ends of Elm Street in both ways. The intention of these cameras is not to monitor traffic on Elm Street. I can’t have officers down there 24 hours a day, 7 days a week. I’ve put more officers down there; we’ll be putting even more down there in the next month or so as we get into the warmer weather. This again is just a tool we’re looking at.”

Capano said the plan is for the cameras to operate a two-week loop; that is, images caught on the cameras will be retained for 14 days.

“There have been a lot of questions as to how long we’re going to keep that information for,” said Capano. “Our intent is not to store that from month to month to month by any stretch; we wouldn’t be able to do that anyways. A two-week loop would give me the ability — if i do get something of a crime on Elm Street or any illegal activity — I can really just go back in time and retrieve that two-week video footage and use that as needed.”

Capano said he has also received questions regarding the need for a live feed.

“The reason for doing the live feed is it simply gives us the ability to monitor Elm Street as far as any illegal activity goes,” said Capano. “The monitor feed would be through our dispatch center.”

Capano said funds for the cameras will come out of his department’s budget.

“We’ve already put that aside and are ready once we are ready to move forward with this,” said Capano.

Capano said his proposal won’t run afoul of that law.

“We’re not looking to monitor vehicles, not looking to identify vehicles, people in vehicles, or plates on vehicles,” said Capano. “There are no license plate readers going on these, no facial recognition software, which has also come up. These are simply security cameras that we are adding to have another tool for the police department in answer to all the questions and concerns we’ve had on Elm Street to the illegal activity.”

Capano said the cameras will have the ability to zoom in, zoom out, and pan around for better views.

Capano was asked about a hypothetical situation where the cameras capture a fight outside a restaurant involving multiple people: Could the police camera zoom in for good images of the participants?

“There is no facial recognition software,” said Capano. “That is extremely expensive. These particular cameras we are looking (at) are very high quality. We would have the ability to clean up certain parts of that and zoom in, we just can’t go too far in or the picture will become blurred.”

City aldermen have voted unanimously to support the project. Capano said he hopes to have the cameras up by June or July.

“That’s not unusual and not really the relationship the commission has with the MPD,” Spradling told a Union Leader reporter. “The leadership will report developments, trends and new items like this one, but our role isn’t necessarily for them to seek advice but rather to update us on their operations and initiatives and to highlight cases and activities.”

Spradling said he has no problem with cameras downtown — a well traveled, highly public area where expectations of privacy are suspended.

“I, and all of the Aldermen as evidenced by the unanimous vote on April 16, support the installation of these cameras as another tool for the men and women of the Manchester Police Department to address issues in the downtown area,” said Craig.

“These are very common throughout the country,” said Capano. “Our intent was not to blindside anybody. Is it a silver bullet for what’s happening down there? Absolutely not. We’re looking at it as a tool.”

In support of district negotiators

Following last week’s special Board of School Committee meeting, where the details of contract discussions between the Manchester School District (MSD) negotiations committee and the Manchester Education Association were revealed, the Concerned Taxpayers of Manchester (CTM) — the group that led the petition drive to cap city spending more than a decade ago — weighed in with a statement supporting district negotiators.

“It was clear to anyone paying attention that the team addressed critical issues and concerns in their approach — while keeping the taxpayers in this city in mind as well,” reads a statement issued by the group late last week.

“When one considers that the school district proposal was about $1.5 million short of the Manchester Education Association’s (MEA) demands and that its original offer increased the salary and benefit lines by an estimated 13.5 percent over four years, we remain concerned that the city’s tax cap would likely need to be overridden in the ensuing years of the contract after this year (assuming a contract is reached). This year’s cap is 2.03 percent and while the current MSD proposal would not impact the cap this year, the math suggests slightly over a 3 percent average each of the remaining years of that contract. We suspect that this average percentage will, in fact, be higher than the likely tax caps for those years.”

The group believes the tax cap “will be trampled” by the MEA’s contract requests as presented last week.

“It is our sincere hope that the City remains firm in their position and does not acquiesce to the unreasonable and insatiable demands of the MEA leadership team,” said CTM in a statement.

Last week, the New Hampshire Senate Finance Committee announced the schedule for public hearings on the state budget — one of which will be held next month in the Queen City.

The hearings are on HB 1-A, making appropriations for the expenses of certain departments of the state for fiscal years ending June 30, 2020, and June 30, 2021, and HB 2-FN-A-L, relative to state fees, funds, revenues and expenditures.

A public hearing will be held Wednesday, May 8, at 7 p.m. in the Aldermanic Chambers at City Hall Plaza.

The public hearing will be streamed online and aired on Manchester Public Television.

When Craig is camera shy

Lawyers for the city of Manchester and the American Civil Liberties Union tangled in a courtroom Tuesday over whether surveillance cameras downtown violate a 2006 law.

NEW YORK — Actress Annabella Sciorra gave emotional testimony Thursday that Harvey Weinstein raped her more than 25 years ago as she helplessly tried to ward off his aggressive advances.

This is an emergency in China' says WHO, as virus death toll rises to 18

WHO says more than 650 people have been infected.

MIAMI — President Donald Trump said on Thursday he will release details of his long-delayed peace plan for the Middle East before Israeli Prime Minister Benjamin Netanyahu and his election rival Benny Gantz visit the White House next week.

MERRIMACK -- Plans have been developed for the next phase of the Normandy Estates housing complex.

Uber is bringing its self-driving vehicle testing to Washington streets

He moderated 12 presidential debates in his forthright, understated manner.

Dear Abby: Wife of a serial philanderer plans ahead for his funeral

DEAR ABBY: I have been married for 37 years.