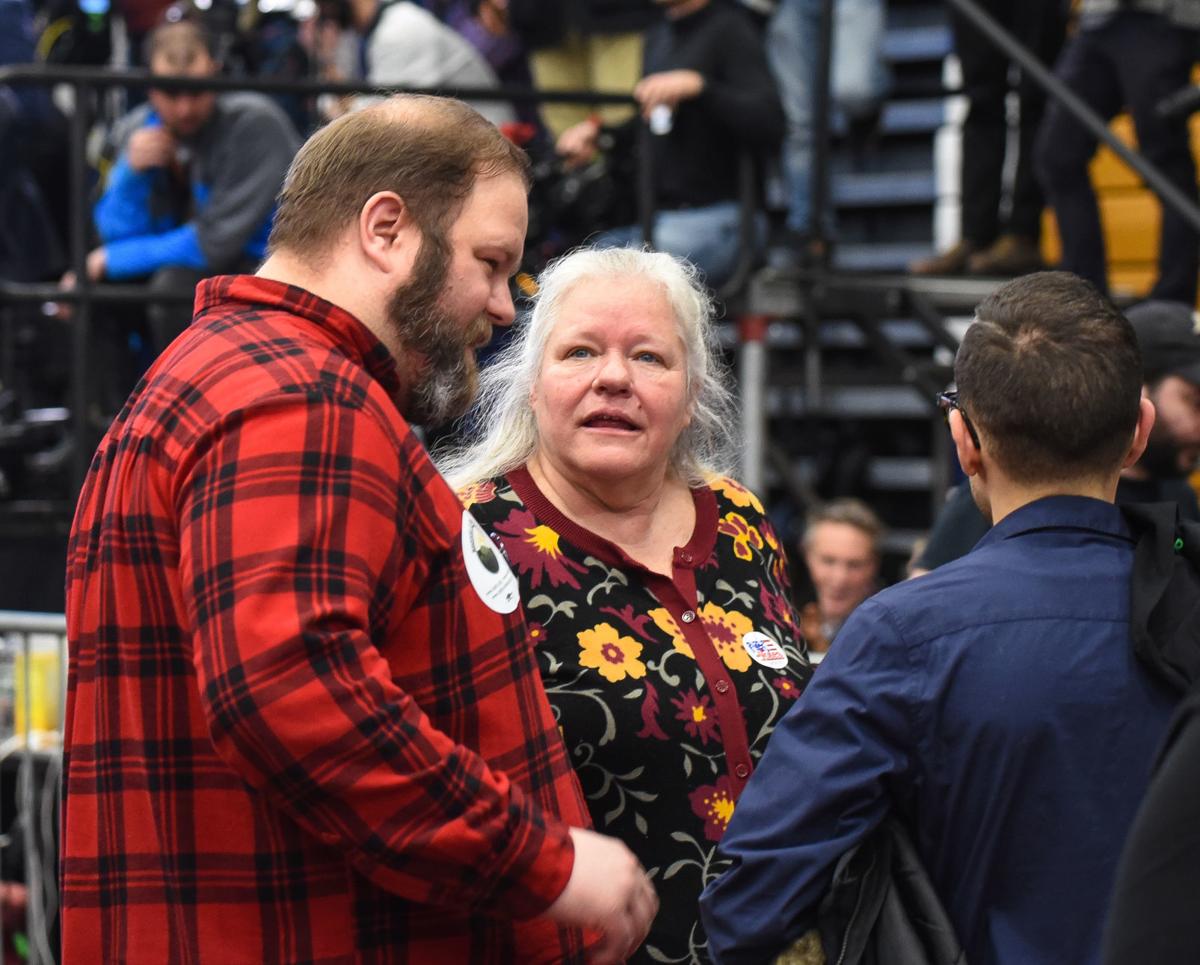 Lifelong Republican, now Bernie Sanders supporter, Sherri Buchanan and her son Ryan, a state representative from Merrimack, hang out before Sanders claimed victory in the New Hampshire Presidential Primary, at his rally at Southern New Hampshire University in Manchester Tuesday.

ONE OF THE HUNDREDS celebrating Sen. Bernie Sanders‘ primary win was Sherri Buchanan of Merrimack. Over the last few years, Buchanan — guided by her son, state Rep. Ryan Buchanan — made the journey from lifelong Republican to Sanders supporter.

“The last election, I could not vote for Trump under any circumstances,” Buchanan said. She would have grounded her son if he lied half as much as the president does.

Her shift to supporting the progressive Vermont senator happened over the course of countless conversations with her son. He’d challenge something she said. He would talk to her about white privilege, money in politics and single-payer health insurance. Eventually, Sherri Buchanan asked her son to take her to a Sanders rally. On Tuesday, both voted for Sanders.

It was the first time she took a Democratic ballot — “And I didn’t change back!” Buchanan said. The Buchanans stayed up well after 11 p.m. on Tuesday to hear Sanders give his victory speech at the Southern New Hampshire University field house.

Sanders’ campaign has not boasted of support among ex-Republicans and Trump voters the way other campaigns did, though polls conducted after the 2016 election found somewhere between 6 to 12 percent of Sanders’ primary voters swung their support to President Donald Trump in the general election. Highlighting former Republicans was one way the other Democratic candidates made a case for their appeal beyond Democratic primary voters.

In addressing supporters on Tuesday night, Sanders said his coalition was multi-generational and multiracial — but did not call out to ex-Republicans among his supporters.

Volinsky’s campaign had a table at Sanders’ victory rally, and Volinsky deputy campaign manager Linds Jakows said they were excited about the prospect of bringing on some of Sanders’ legions of volunteers and harnessing some of what Jakows called the “electric” energy in the SNHU field house.

On the other hand, Jakows said, the campaign is looking to build a broad coalition, reaching beyond Sanders supporters.

Feltes did not endorse a Democratic presidential nominee, but has a few endorsements from some of Sanders’ prominent supporters, like former state representative Mindi Messmer, who was a co-chair on Sanders’ New Hampshire campaign. Chris Galdieri, associate professor of politics at St. Anselm College, said the Sanders win came from just over a quarter of Democratic primary voters, many of whom will not show up to vote in the gubernatorial primary in September. “It might help a bit in a tight primary,” Galdieri said of an endorsement from Sanders. “It wouldn’t necessarily have the same impact if he had won it running away, the way he did four years ago

On Monday, Trump reminded the thousands at his Manchester rally of his support for Lewandowski, rather than getting behind any of the three candidates running for the Republican nomination.

“If we could get him to run for Senate, he would win so easily,” Trump said Monday of Lewandowski, who lives in Windham.

The mere mention of Lewandowski was enough for Shaheen’s campaign to put together four fundraising emails Tuesday and Wednesday, warning supporters that Lewandowski could change his mind after the president’s encouragement.

Biden and Warren look ahead

Former vice president Joe Biden was rallying in South Carolina as it became clear he would finish in fifth place in the primary. He told supporters there the first two contests were only a small part of the nomination. “Not all of the nation, not half of the nation, not a quarter, not 10 percent,” he said.

When Sen. Warren addressed supporters in Manchester Tuesday night, she congratulated Sanders, Buttigieg and Klobuchar, and acknowledged her disappointment. “But our campaign is built for the long haul. And we are just getting started,” she said.

Unlike any first-in the-nation primary in recent history, third place was worth fighting for on Tuesday, and a surging Midwestern senator appe…

For some, a loss here is end of trail

Nashua man charged with DWI after driving into pole in Hudson

HUDSON -- A Nashua man was charged with drunken driving after he crashed into a utility pole on Ferry Street Sunday night, police said.

RUMNEY -- A Massachusetts man and his two young daughters were seriously injured Sunday when their snowmobile crashed on the summit of Stinson Mountain.

The owners of Elle’s are building a jazz and blues supper club.

A PUBLIC HEARING last week for the Manchester School District Charter Commission drew only about a dozen people — but those who came had plenty to say.

Looking Back: Mary Dyer takes her cause to the NH Legislature

Mary Dyer left the Shaker village in Enfield, N.H. voluntarily in late January 1815, having abandoned the religious sect’s restrictive way of life. But gaining any true freedom was impossible for her, as she had no means of supporting herself.