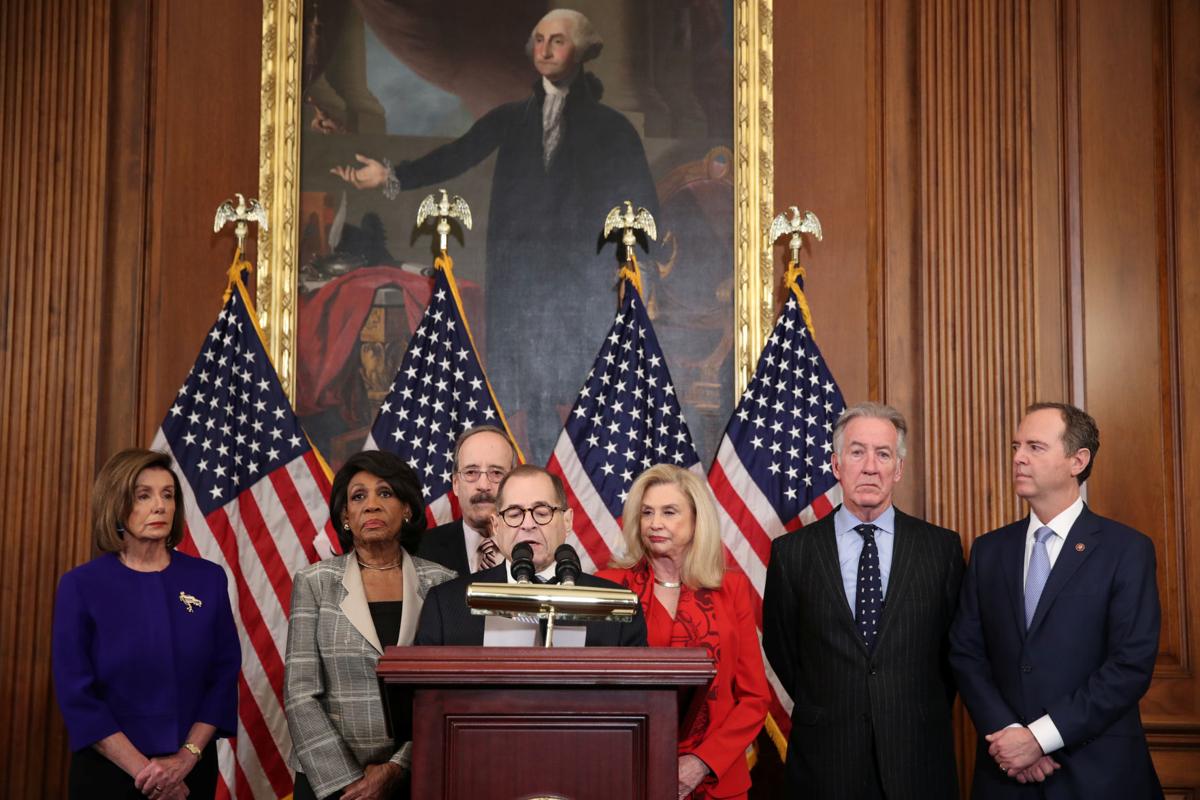 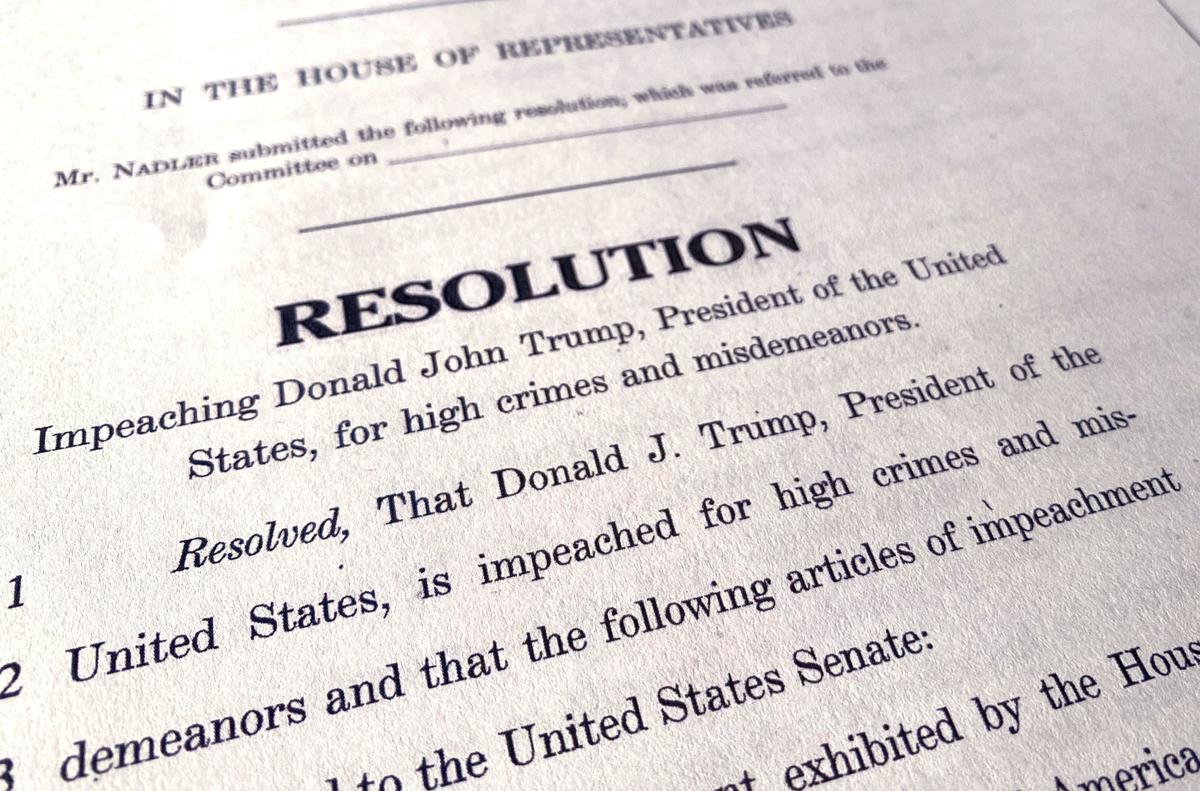 A copy of the House of Representatives articles of impeachment resolution that Democrats hope to use to impeach President Trump is seen after being drafted by House Judiciary Committee Chairman Jerrold Nadler, D-N.Y., and released in Washington on Tuesday.

A copy of the House of Representatives articles of impeachment resolution that Democrats hope to use to impeach President Trump is seen after being drafted by House Judiciary Committee Chairman Jerrold Nadler, D-N.Y., and released in Washington on Tuesday.

WASHINGTON — Democrats in the House of Representatives announced formal charges against President Donald Trump on Tuesday that accuse him of abusing power and obstructing Congress, making him only the fourth U.S. President in history to face impeachment.

The full Democratic-controlled House is expected to vote on the charges, or articles of impeachment, next week. It is almost certain to vote to impeach the Republican President, setting the stage for a dramatic trial in the Republican-controlled Senate, likely to begin in January.

House Judiciary Committee Chairman Jerrold Nadler told reporters that Democrats had to take action because Trump had endangered the Constitution, undermined the integrity of the 2020 election and jeopardized national security.

“No one, not even the President, is above the law,” Nadler said at a news conference that included House Speaker Nancy Pelosi and Democratic leaders of committees involved in the impeachment probe.

“Our elections are a cornerstone of democracy ... the integrity of our next election is at risk from a President who has already sought foreign interference in the 2016 and 2020 elections,” Nadler said.

Trump has denied wrongdoing and calls the inquiry a hoax. The White House has refused to participate in the hearings in the House because it says the process is unfair.

Trump attacked the impeachment effort in a Twitter post early on Tuesday, saying to impeach a president when the country has such a strong economy “and most importantly, who has done NOTHING wrong, is sheer Political Madness!”

Democrats have moved rapidly in their impeachment inquiry since launching an investigation on Sept. 24 into allegations that Trump pressured Ukraine to investigate a Democratic political rival, former Vice President Joe Biden, in the 2020 elections.

They accuse Trump of abusing power by withholding aid to Ukraine, a vulnerable U.S. ally facing Russian aggression, as well as dangling a possible White House meeting to get Ukrainian President Volodymyr Zelenskiy to launch the investigation.

Republicans say Democrats are seeking to overturn the results of the 2016 election with a “witch hunt” against Trump, who denies he did anything wrong.

“Americans don’t agree with this rank partisanship, but Democrats are putting on this political theater because they don’t have a viable candidate for 2020 and they know it,” Brad Parscale, Trump’s 2020 re-election campaign manager, said in a statement.

The House Judiciary panel could vote this week on whether to send the formal charges to the full House, which would likely vote on them next week.

Pelosi launched the impeachment probe after a whistleblower reported concerns over a July 25 telephone call in which Trump sought help from Zelenskiy to investigate Biden, a leading contender in the Democratic race to challenge Trump in next November’s election.

That led to weeks of investigation and hearings in the House. Committee leaders met with Pelosi following the last scheduled impeachment hearing on Monday evening.

Democrats say their investigation shows Trump withheld $391 million in military aid and the White House meeting to get Zelenskiy to investigate Biden and his son Hunter Biden, as well as a debunked theory that Ukraine, not Russia, interfered in the 2016 U.S. election.

Republicans argue Trump did nothing improper in his call with Zelenskiy and say there is no direct evidence he withheld aid or a White House meeting in exchange for a favor.

The Judiciary Committee would need to give 24 hours’ notice before meeting to vote on whether to forward the articles to the full House for a final impeachment vote by the chamber.

WASHINGTON - President Donald Trump was acquitted on Wednesday in his Senate impeachment trial, saved by fellow Republicans who rallied to protect him nine months before he asks voters in a deeply divided America to give him a second White House term.

WASHINGTON — House managers argued Monday that senators have a “duty” to remove President Donald Trump from office as they opened closing arguments in the impeachment trial following last week’s vote not to call witnesses regarding his conduct toward Ukraine.

WASHINGTON — Senators reconvened Thursday for a second day of questions to House impeachment managers and President Donald Trump’s lawyers ahead of a crucial vote expected Friday on whether to call witnesses to testify about the president’s conduct toward Ukraine.