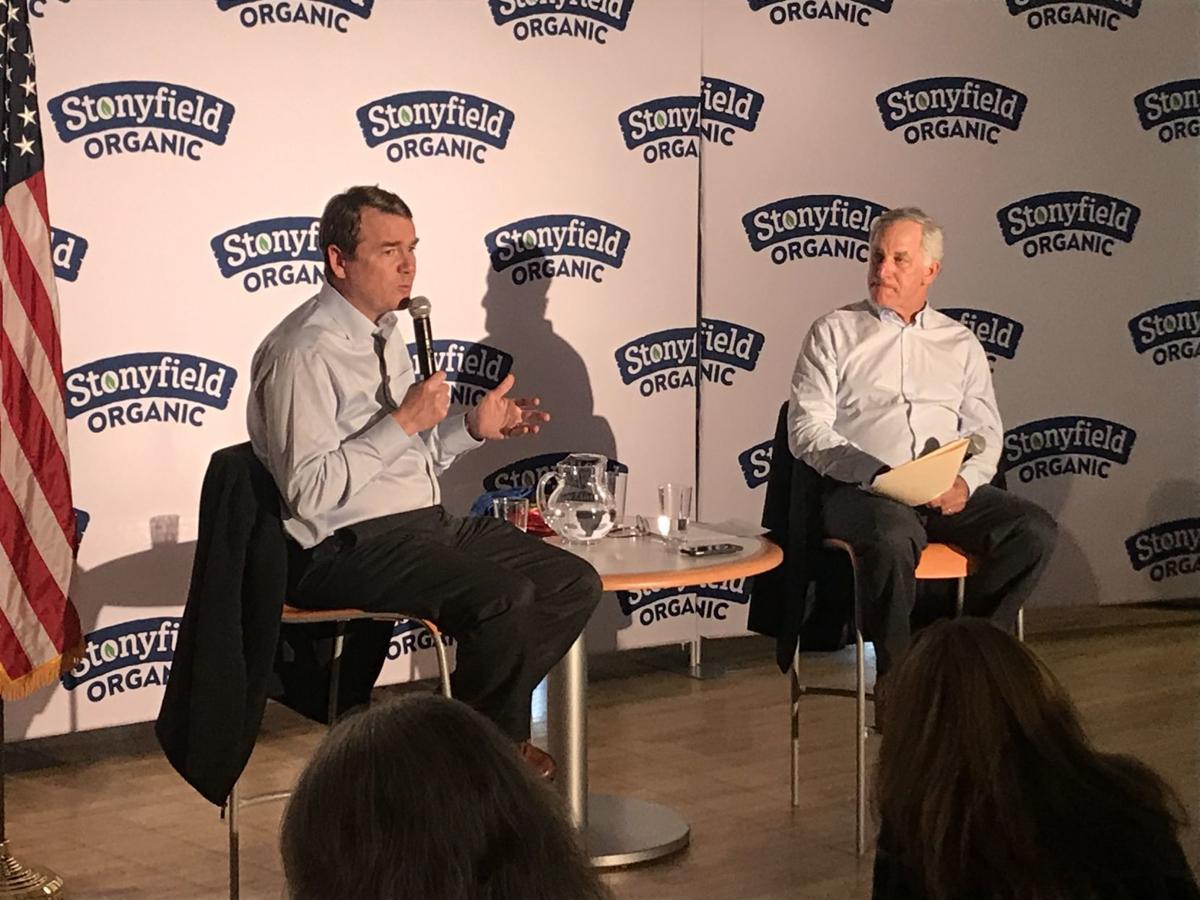 Colorado Sen. Michael Bennet, left, joined Stonyfield Organic founder Gary Hirshberg at Stonyfield in Londonderry on Friday. He supports a carbon tax and wants to create a new political coalition to enact change in Congress on the issue of climate change. 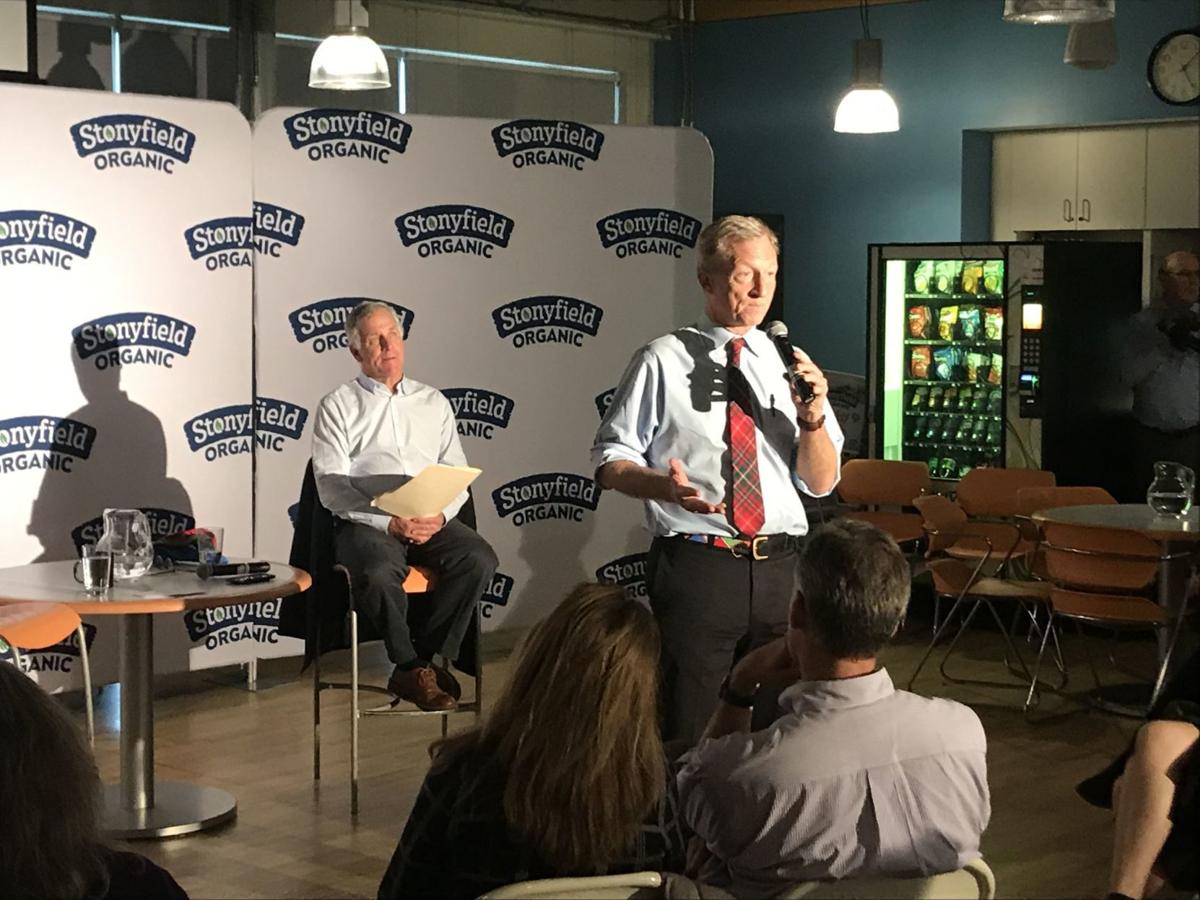 Bennet said he doesn’t want to be part of the generation that leaves things worse for the next, saying young people already have a lot to be upset about, such as national and student debt.

“The one where they’re really gonna want to string us up if we don’t get our act together is on climate,” he said.

A member of the Senate Committee on Agriculture, Nutrition, & Forestry, he said his climate plan would hit net zero carbon emissions by 2050.

“The big difference in my plan is that I focus on conservation of our working lands and our forests as an important part of the job we have to do on climate change,” he said. “By incentivizing sustainable farming practices and ranching practices, I think we can make a huge difference in the outcomes.”

Steyer said climate change is also a top concern for him.

“I am the most serious person about climate in this race,” he said. As President, he said, he would declare a state of emergency on day one. “I would use the emergency powers of the presidency because this is an emergency that affects the health and safety of every American,” he said.

He said companies like ExxonMobil tip the scales in Washington.

“If we’re not leading on this internationally from day one, it’s too late,” he said.

The way forward, Bennet said, is creating a political coalition based in the center of the country to prioritize the issue.

He said he wants to focus on soil health and water conservation as a means of sequestering carbon, and that he thinks a carbon tax would be the most efficient way to mitigate carbon emissions.

Steyer said his plan leaves open the possibility of a carbon tax or cap-and-trade system, but he doesn’t think either alone will move the needle on climate change fast enough. He said a tax doesn’t drive the necessary change, but that rules do. “Carbon tax does not work. It doesn’t hurt. It adds, but it’s not the central thing,” he said.

Hirshberg asked Bennet what he would do on day one if elected. He said he would convene the people needed to draft key legislation.

He also said he would get the country back on track to rejoin the Paris Climate Agreement.

He said he co-authored a climate change bill that would create a mitigation tax credit for homes and businesses in natural-disaster-prone areas.

“Most businesses in this country believe that we need to do something about this,” but the U.S. Chamber of Commerce hasn’t come around on the issue because it’s dominated by the fossil fuel and chemical industries, he said.

He said he’s proposed investing a trillion dollars in the clean energy industry, which he said will boost the economy and counter some of the impacts of a carbon tax on companies.

Steyer talked about starting NextGen America, which has been active in New Hampshire since 2014, and he said it’s been successful at flipping congressional districts on climate change.

Steyer said he thinks increasing voter turnout will benefit Democrats in the next election cycle, and he’s predicting the highest voter turnout in living memory. For the sake of winning the election and Democrats taking control of the Senate, he said driving turnout is more important than persuading farmers and ranchers to change their vote.

“This is a state that should be a blue state,” he said of New Hampshire.

He said Republicans have been “cheating” to win elections by limiting who is allowed to vote with voter ID laws.

Steyer called himself an “outsider” who is different from all other candidates running. He said his basic thesis is that corporations “own” the government and voters have to overthrow the corporations and give power back to the people. The person for that job is an “outsider” like him, he said.

Trump says he knows identity of author known as 'Anonymous'

WASHINGTON — President Donald Trump said on Tuesday that he knew the identity of an anonymous Trump administration official who wrote an essay for the New York Times and later a book about efforts from within to thwart parts of the president’s agenda to protect the country from his worst impulses.

Bloomberg moves into second behind Sanders among Democrats, Biden third

NEW YORK — Michael Bloomberg, a late entry into the Democratic presidential race, has moved into second place ahead of onetime front-runner Joe Biden, according to a Reuters/Ipsos national poll released on Tuesday that showed Bernie Sanders widening his lead over the field.

More than 26,000 Democrats show up for first two days of Nevada early voting

More than 26,000 people took part over the weekend in early voting in Nevada, the state with the next nominating contest in the Democratic White House race, and more than half on the first day were first-time caucus-goers, the state party said.

WASHINGTON — More than 1,000 former U.S. Justice Department officials on Sunday called for Attorney General William Barr to resign over his handling of the trial of a longtime adviser of President Donald Trump.