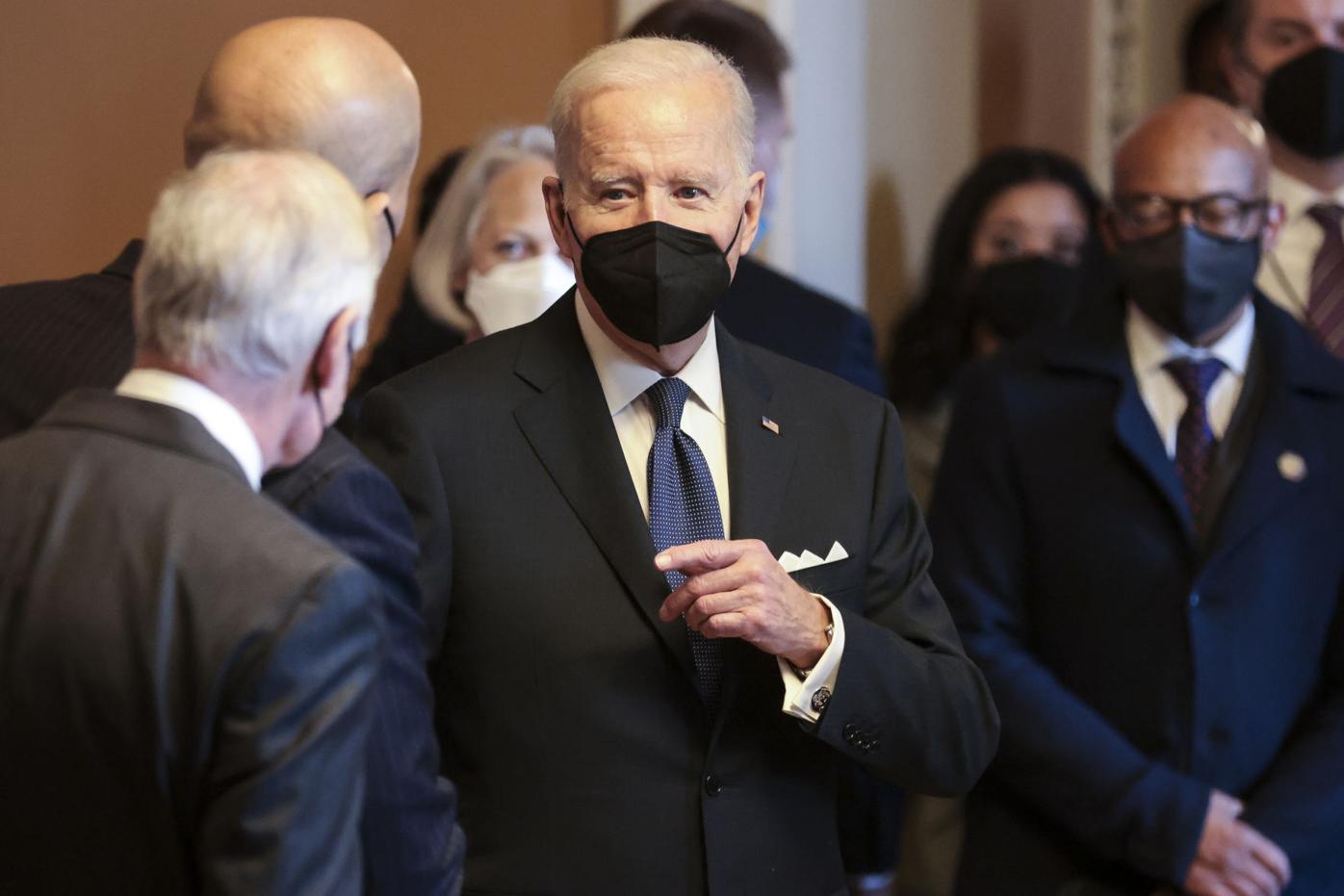 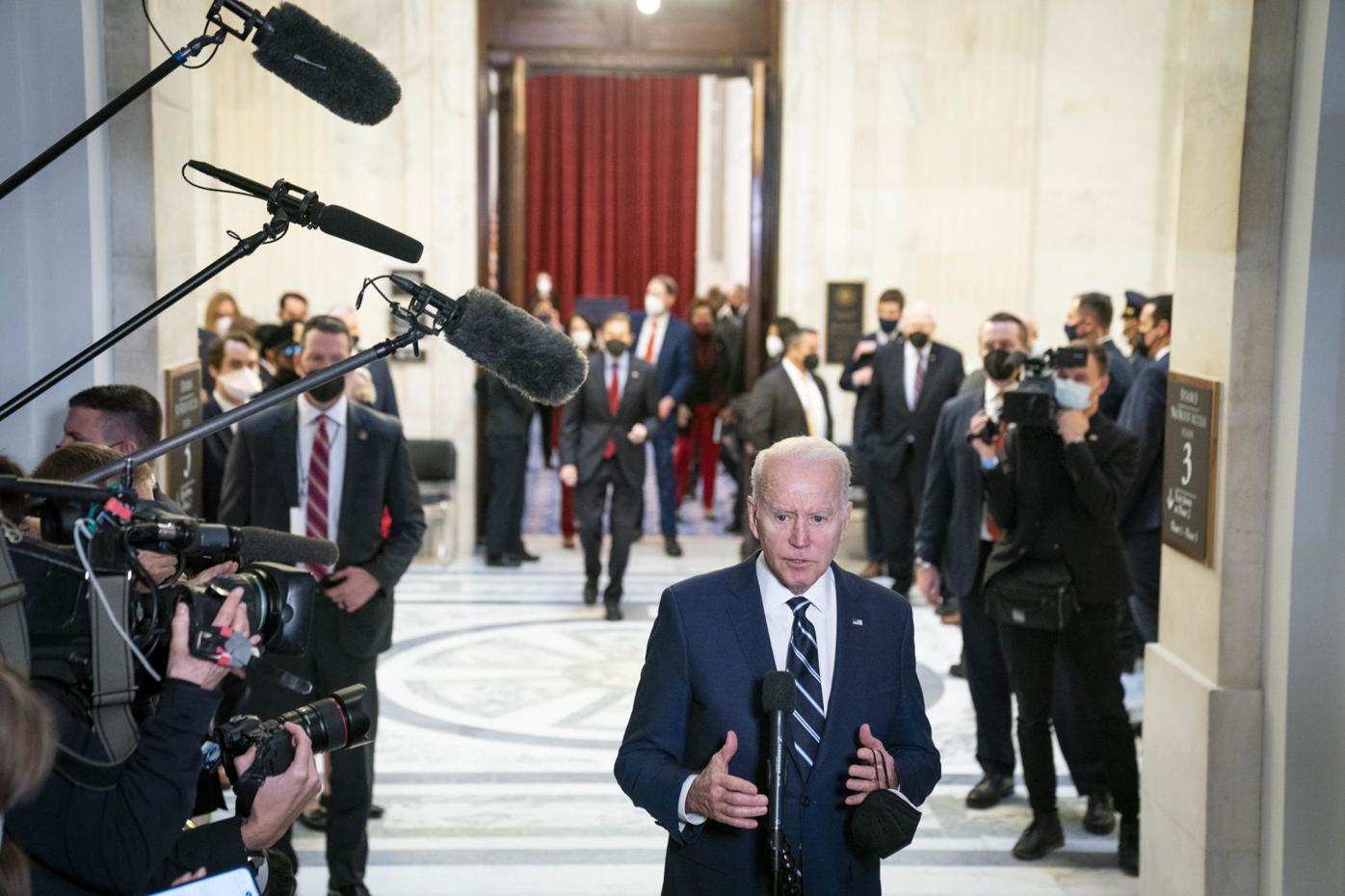 President Joe Biden speaks to the media after meeting with Senate Democrats to deliver a forceful appeal for action on Capitol Hill.

WASHINGTON - Democrats' hopes of finally pushing through voting rights legislation after months of Republican opposition appeared to be fatally wounded Thursday as two Democratic senators announced they would not support changing Senate rules that have long allowed a minority of senators to block legislation.

The trip was rendered futile before Biden even set foot in the presidential limousine Thursday when Sinema explained her views in a midday floor speech. Manchin issued a written statement outlining his position shortly after Biden left.

Leaving the room after a lunch meeting that stretched over an hour, Biden acknowledged doubts that the push for federal voting legislation would ultimately be successful.

The imminent failure of the voting effort was another blow to an administration that has been struggling to deal with a wave of new coronavirus infections, persistent high inflation and new foreign policy challenges abroad, including a potential Russian invasion of eastern Ukraine. Not long after Biden left Capitol Hill, the Supreme Court invalidated his national vaccine-or-testing mandate for private businesses.

Still, Democrats vowed to move forward with a floor confrontation in the coming days that threatens to bring their year-long quest to counter Republican-passed state voting restrictions to an especially frustrating end.

In an apparent last-ditch attempt to salvage the effort, Manchin and Sinema traveled to the White House late Thursday for a private meeting with Biden, according to two people familiar with the gathering who spoke on the condition of anonymity to describe the plans. Aides had no comment on the meeting after it concluded.

But there appeared to be little hope that either Manchin or Sinema would reverse their long-standing public positions defending the filibuster, the Senate's 60-vote supermajority rule, as a tool to facilitate bipartisan cooperation and guard against wild swings in federal policy.

"While I continue to support these [voting] bills, I will not support separate actions that worsen the underlying disease of division infecting our country," Sinema said in her speech Thursday, adding that lawmakers "must address the disease itself . . . to protect our democracy."

"The response requires something greater and, yes, more difficult than what the Senate is discussing today," she said.

Manchin, in his statement, defended the filibuster's "important role in protecting our democracy from the transitory passions of the majority and respecting the input of the minority in the Senate."

"Ending the filibuster would be the easy way out," he said. "I cannot support such a perilous course for this nation when elected leaders are sent to Washington to unite our country by putting politics and party aside. It is time we do the hard work to forge the difficult compromises that can stand the test of time and deliver on the promise of a brighter tomorrow for all Americans."

Biden, a former six-term senator, delivered his closed-door pitch two days after he made a pointed public case for changing the filibuster to pass voting rights bills. Inside the room, Biden did not personally target the holdout senators, multiple attendees said, but rather made a high-minded pitch about the moral urgency of the moment while also drawing on his experience as a senator to lament the decline of an institution that has become increasingly riven by political polarization.

Sen. Tim Kaine, D-Va., said Biden's remarks were similar to his Tuesday speech in Atlanta, "but it was probably a little bit heavier on, 'Hey guys, I've been a senator for 36 years. I love this place. And I know when it is an important moment.' "

"He emphasized not only that history will be watching you, but that a lot of people don't have an opportunity to do something that will do so much good for so many at a time where it's so necessary," Kaine said.

Attendees said Manchin posed a question to Biden about the history of Senate rules, leading to a respectful back-and-forth. Sinema, according to multiple senators, did not address Biden or her colleagues.

Senate Majority Leader Chuck Schumer, D-N.Y., who called the struggle to persuade Manchin and Sinema "an uphill fight" in interviews this week, laid out a plan Wednesday to bring two key voting rights bills to the Senate floor in the coming days, setting up a final showdown over the rules early next week.

Schumer's plans to hold floor votes on the matter ahead of the Martin Luther King Jr. holiday were stymied, however, after Sen. Brian Schatz, D-Hawaii, announced Thursday he had tested positive for the coronavirus, putting him into isolation for the time being, and winter storms were forecast for the weekend. The majority leader said late Thursday that the proceedings would begin next Tuesday, postponing the scheduled Senate recess.

Speaking on the Senate floor Thursday morning, Schumer said Democrats had no choice but to move forward unilaterally after trying to secure GOP cooperation on voting rights for months.

"Every step of the way, we've been met with near total resistance," he said. "I have said for months that just because Republicans have refused to work with us to protect voting rights does not mean Democrats would stop working to move forward on our own. The matter is simply too important."

Senate Minority Leader Mitch McConnell, R-Ky., meanwhile, accused Democrats of focusing on the divisive and distracting issue of voting rights and Senate rules instead of more pressing challenges to the nation's economy and security.

"There's a path forward for my Democratic colleagues to respond to the country they have so badly disappointed, but it isn't to try to break the Senate and rewrite election laws, it's to actually start tackling the issues that American families need tackled," he said.

After Sinema spoke Wednesday, McConnell called her speech "a conspicuous act of political courage," while other Republicans marveled at how Democrats brought the issue to a head knowing Sinema's long-standing views on the filibuster.

"She's just expressing a frustration that they don't appear to be listening to her," said Senate Minority Whip John Thune, R-S.D. "She's been clear. She's been public from the beginning about this, and they seem to continue to think that somehow they're going to switch her, and the more they do that, I think the more dug in she's gotten."

More than a half-dozen Republicans, including top leaders McConnell and Thune, watched Sinema's speech inside the Senate chamber, while only two Democrats opted to attend in person.

Delivering the speech wearing purple, a symbol of Washington bipartisanship, Sinema said she wished there had been "a more serious effort on the part of Democratic Party leaders to sit down with the other party and genuinely discuss how to reforge common ground" on voting rights issues. But she also said Republicans "have a duty to meet their shared responsibility to protect access to voting and the integrity of our electoral process."

The suggestion that Democrats could have done more to win GOP support for voting bills rankled some Democratic senators, including some who had tried to negotiate a compromise over the course of last year to no avail.

"It's important to emphasize that what [Republicans] blocked was our ability to even have a debate on the issue," said Sen. Raphael Warnock, D-Ga., who faces a difficult reelection campaign this year in a state that was among the first to pass new voting restrictions. "They are not serious. And it is unfortunate that politicians are choosing power over the principles of democracy."

The confrontation has been nearly a year in the making, initially spurred by new voting laws passed by Republican state legislatures starting early last year that sought to scale back voting by mail, early voting, ballot drop boxes and other provisions that have made voting more convenient and accessible but became a central focus of former president Donald Trump's false claims that the 2020 presidential election was stolen.

Civil rights groups with close ties to Democratic Party leaders have been especially forceful in calling for action, warning that the GOP state laws threaten to depress minority turnout and swing future elections.

Republican leaders in Washington have aggressively countered the push, arguing that the state laws are justified to restore faltering public confidence in elections and that the federal government has no role in dictating how states run their elections.

In fact, the Constitution gives Congress wide latitude to regulate the conduct of federal elections, and the Senate has tried four times over the past year to pass voting rights bills. Each time, with one exception, Republicans banded together to block their advancement. (Sen. Lisa Murkowski of Alaska voted to advance one bill, the John Lewis Voting Rights Advancement Act, in November.)

The failed efforts have spurred rising interest among Democrats in changing the Senate rules to prevent future GOP blockades.While Manchin and Sinema have been closely involved in discussions with their colleagues about the Senate rules, they made no public indication that they would breach the 60-vote rule, which has been eroded over the years for executive nominations, budget legislation and other limited circumstances.

Manchin this week told reporters that he was not willing to change the rules without GOP buy-in, and he again defended the importance of the supermajority threshold, saying senators "need to be very cautious [about] what we do."

Sinema has made clear she supports federal legislation on voting rights but has consistently expressed reservations about changing Senate rules to pass it - a position that only solidified after she led a group that negotiated a bipartisan infrastructure bill this past summer.

After she detailed her argument Thursday identifying widening political divisions as the crucial element threatening American democracy, several of her colleagues openly questioned her analysis and expressed fears that a failure to act urgently could permanently harm the nation.

"What is poisonous is taking away people's right to vote," said Sen. Martin Heinrich, D-N.M. "That's not a slippery slope - that is a real slope to not having a functioning democracy."

"She believes that the risk of changing the filibuster is greater than the risk of what's going on in the states," said Sen. Angus King, I-Vt. "I hope profoundly that she's right. I fear that she's wrong."