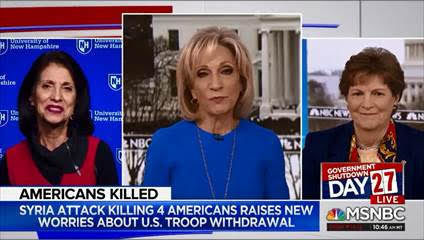 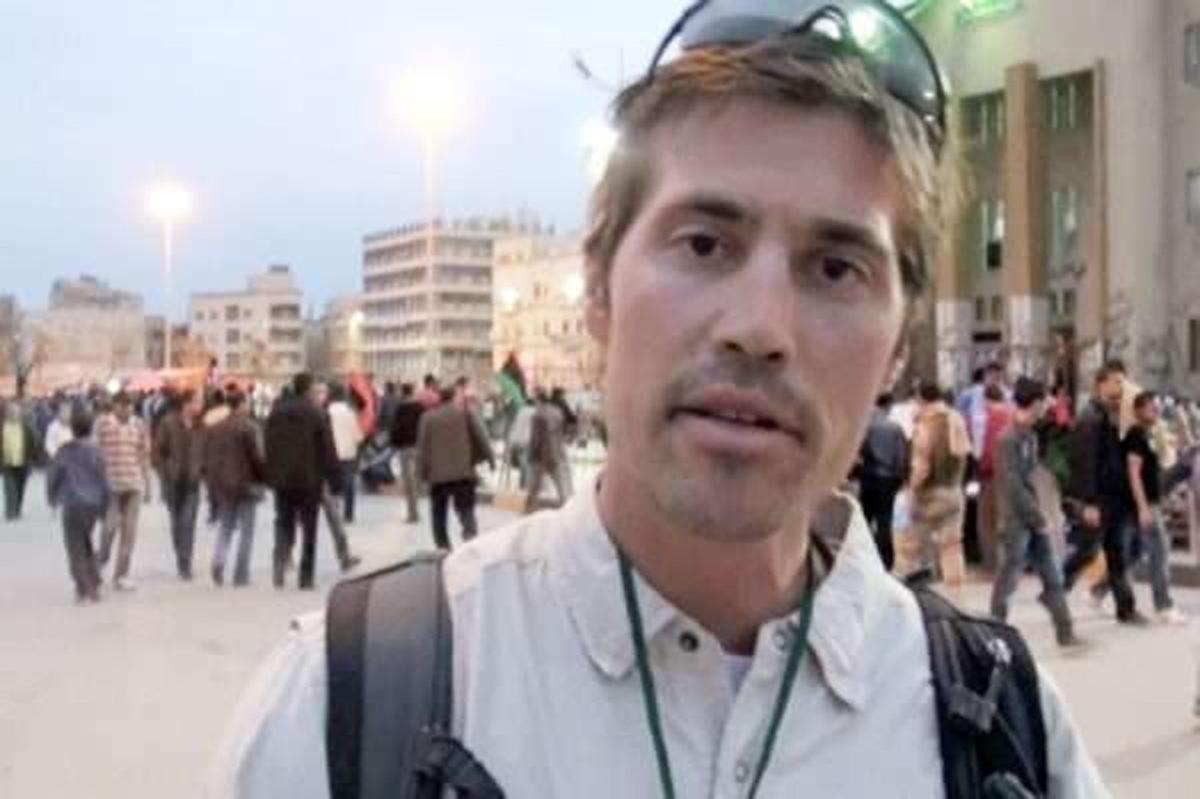 The mother of a slain journalist from New Hampshire and U.S. Sen. Jeanne Shaheen, D-N.H., believe the tragic bombing in Syria last Wednesday that killed 16 people, including four Americans, could build bipartisan momentum to fight President Donald Trump’s bid to withdraw troops from the war-torn country.

Diane Foley of Rochester said the attack from ISIS-backed forces proves that if American troops are pulled out then the Syrian Democratic Forces soldiers the U.S. supports will be unable to hold more than 10,000 captured ISIS fighters.

The detainees include two who are believed to be responsible for the brutal torture and murder of photojournalist James Foley and three others in August 2014.

“ISIS is just watching us. The problem with this enemy is that they are very shrewd, and we may well have taken back the territory, but they are underground. They are looking for that opportunity to hurt us, to ridicule us, and that’s what we saw with that awful bombing this week,” Foley said during a telephone interview last week.

Shaheen, a member of the U.S. Senate Committee on Armed Services, said the panel received a classified briefing last week about Trump’s withdrawal plans. The tragic killing at a restaurant in Manbij should at least dramatically slow down any planned pullout, she said.

“There will be continued efforts to try and make sure the drawdown as it proceeds will be done in a way that is effective, and hopefully, it is done in a way that keeps both American soldiers and our Syrian Democratic Force partners safe,” Shaheen said.

Trump went to Dover (Del.) Air Force Base midday Saturday to join family members for the arrival of the American victims from the bombing.

“When I’m going to meet relatives of some of our great, great heroes that have fallen I think it might be the toughest thing I have to do as President,” Trump told reporters outside the White House prior to the solemn ceremony.

Some back Syrian pullout

Meanwhile Shaheen is well aware that many of her colleagues on Capitol Hill, some of the most conservative and most liberal members, support Trump’s goal of getting out of Syria.

“I think that everybody who keeps saying, ‘No, no, no, we can’t do that,’ in the defense establishment needs to explain what they think winning in those wars (looks) like and where the metrics are,” Warren said in her first interview since she created an exploratory campaign to consider a 2020 presidential run.

Warren disagreed with Trump’s abrupt announcement of his decision on Syria and said policy shouldn’t be conducted via Twitter.

“We actually need to plan this out and talk about it with our allies, how we ensure more safety and stability in the region.”

“I’m not a big fan of the commitments America has made over these past 15 years, whether it was the Iraq War or (in Syria),” Castro said.

While campaigning in Manchester on Friday, 2020 Democratic presidential candidate John Delaney, a former Maryland congressman, said getting out of Syria should be the endgame.

“I think that troops eventually should be withdrawn from Syria, but it needs to be done in a way that accomplishes our goals in the region that include permanently defeating ISIS, assuring that the Syrian Democratic Forces aren’t invaded by Turkey, and that there remains a check on Iran in the region,” Delaney said during an interview.

The morning after the bombing, Sen. Lindsey Graham, R-S.C., said the tragic scene at the Palace of Princes Restaurant was the same place he and Shaheen had met with Kurds, Arabs and others involved in the Syrian resistance movement last July.

On Friday, a New York Times reporter said he traveled with the delegation and said a former car dealership owner, Shikh Khalif, told Graham and Shaheen during the meeting what he expected would happen if American troops left the region.

Khalif said the Islamic State might return or the region could fall under the control of the government of Syrian president Bashar al-Assad, or even be occupied by the Turkish military.

“It would be chaos,” Khalif said.

Shaheen said she would await confirmation from the Department of Defense that the restaurant scene she visited and the bombing were the same site, adding, “The pictures do look similar.”

Shaheen recalled how supportive the scene in that Manbij neighborhood had been during their visit.

“When we were there, Manbij seemed to be thriving, people were smiling and waving at us, kids flashing the victory sign,” Shaheen said.

“We heard everywhere we were that the Syrian Democratic Forces were urging us to stay and talking about the importance of keeping the partnership.”

Foley urged Shaheen to take the trip to see firsthand the prisons where ISIS fighters are being held.

In January 2018, U.S.-backed Kurdish forces in Syria captured Alexanda Kotey and El Shafee Elsheikh, two members of the British jihadist group known as “the Beatles,” who were allegedly responsible for the Americans’ kidnappings, torture and murder.

Graham has told Foley that U.S. intelligence has solid evidence that the pair was responsible for the deaths of Foley and three other American hostages: Peter Kassig, Steven Sotloff and Kayla Mueller.

Making the case to transfer them back to the U.S. to stand trial in a civilian court has been difficult, Foley said.

“Last October, Elsheikh’s mother filed suit that his rights were being deprived while in captivity,” Foley said. “This action has really stopped the momentum of bringing these people to justice.”

Shaheen said the Pentagon is supportive of the efforts to bring these accused killers to the U.S.

“With conversations I have had with the administration and the military, this is something they are committed to trying to do, but it takes time,” Shaheen said.

Foley said the challenge facing her and other advocates has been to keep this horrific crime against her son in the public’s consciousness.

“I am so grateful the U.S. has made such a big deal about (Saudi-American journalist Jamal) Khashoggi’s murder, but where is the outcry when four Americans are killed, innocent young journalists and aid workers just trying to show light in a dark part of the world?” Foley asked.

“It is just something hard for me to fathom. We forget at our own peril because, as we saw last week, they will just do it again. I pray that we can be the shrewd ones, be patient and hold these people accountable.”

Last week’s bombing also had a New Hampshire connection: Decorated Army Green Beret Chief Warrant Officer Jonathan R. Farmer, who was killed in the blast, had spent some of his early high school years in Laconia.

A native of Boynton Beach, Fla., Farmer, 37, played on Laconia High School’s baseball and basketball teams and completed his sophomore year before his family moved back to Florida in 1997.

Slain journalist to get Life and Liberty Award

Slain journalist James Foley of Rochester will be honored with the Life and Liberty Award during a ceremony at the New Hampshire Supreme Court on Tuesday.

On 5th anniversary of his death, James Foley's legacy lives on

Monday marked five years since freelance war correspondent James Foley of Rochester was killed by ISIS after being held captive in Syria.

The Justice Department revealed charges this week against a Texas man who allegedly stormed the U.S. Capitol on Jan. 6 and threatened on social media to kill Democratic U.S. Rep. Alexandria Ocasio-Cortez.

WASHINGTON — Gov. Chris Sununu has ordered the return of all New Hampshire National Guard soldiers from Washington, after news reports surfaced of soldiers spending the night in a Capitol-area parking garage, putting them in close quarters with moving cars, exhaust fumes and troops potential…

Trump impeachment trial to begin in Senate week of Feb. 8

WASHINGTON — Former President Donald Trump’s impeachment trial will begin during the week of Feb. 8, Senate Majority Leader Chuck Schumer said on Friday, after the House of Representatives formally delivers the impeachment charge to the chamber on Monday.

NH boy befriended by Biden to be part of inauguration show

NH boy befriended by Biden to be part of inauguration show