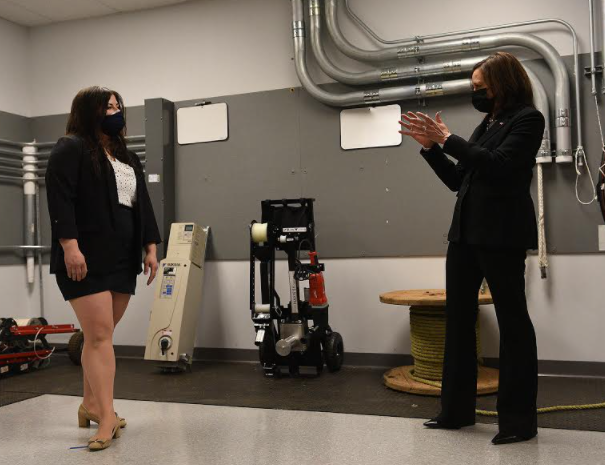 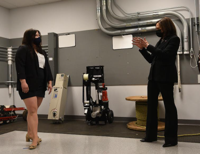 Kelli O’Connor of Nottingham, a second-year apprentice studying to become a licensed electrician, talks about her story with Vice President Kamala Harris during a tour of the International Brotherhood of Electrical Workers Training Center in Concord last Friday. 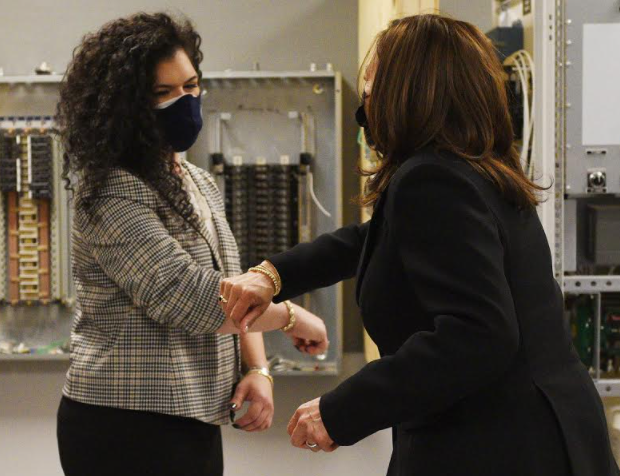 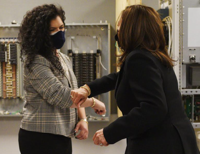 Haley Kamberlais, left, meets with Vice President Kamala Harris, telling her story of going from electrician apprentice at 18 to project manager at 25. The single mom who is partially blind and deaf, was the only woman in a Boston union local program 13 years ago. Below, the vice president exits Air Force 2 at Laconia Municipal Airport. 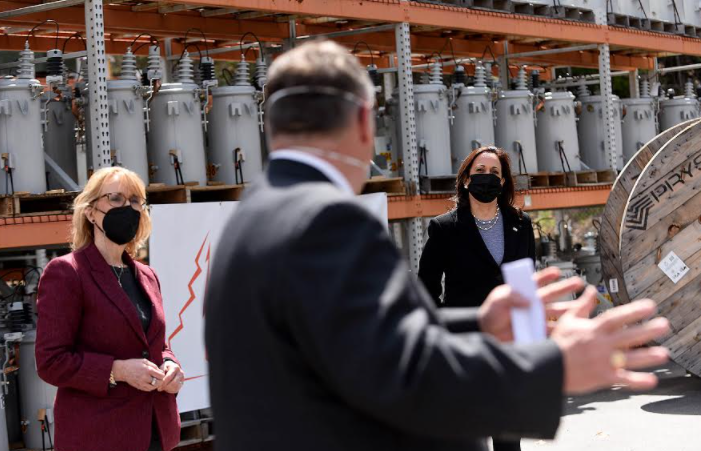 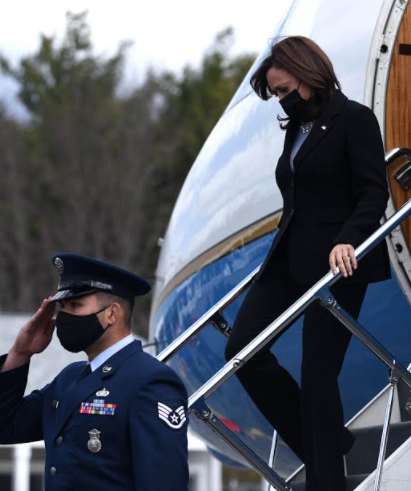 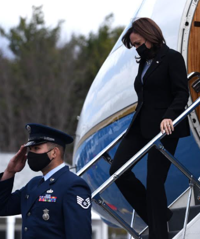 Kelli O’Connor of Nottingham, a second-year apprentice studying to become a licensed electrician, talks about her story with Vice President Kamala Harris during a tour of the International Brotherhood of Electrical Workers Training Center in Concord last Friday.

Haley Kamberlais, left, meets with Vice President Kamala Harris, telling her story of going from electrician apprentice at 18 to project manager at 25. The single mom who is partially blind and deaf, was the only woman in a Boston union local program 13 years ago. Below, the vice president exits Air Force 2 at Laconia Municipal Airport.

CONCORD – Kelli O’Connor, Haley Kamberalis and Phillip Tirrell personalized the message of Vice President Kamala Harris, who in her first New Hampshire visit listened and talked about how expansion of rural broadband and more workforce training under the Americans Jobs Plan could help transform the economy.

O’Connor of Nottingham said she was always missing her partner, dog and home while on the road working as a sound system engineer at live concerts until tragedy changed her priorities.

“I lost my brother to heroin addiction in 2017,” O’Connor told Harris during a tour of the International Brotherhood of Electrical Workers (IBEW) Training Center here Friday.

“Life is about memories and being with the ones that you love. I decided I wanted to be an electrician …. My quality of life has improved tremendously. I have weekends now and I have learned so much.”

Kamberalis was in Boston 13 years ago, admittedly shy and the only woman studying to be an electrician in that city’s union local.

Five years later, she was a licensed electrician and at 25, a project manager with a successful electric contracting company.

“I had zero student loans with a skilled trade that will never be obsolete,” she said.

Tirrell is chairman of the Board of Selectman in Lempster, a small, town southwest of Claremont known colloquially as an Internet “dead zone.”

But that is going to change, with the New Hampshire Electric Cooperative’s plan to eventually expand rural broadband to 115 towns in nine of the state’s 10 counties.

They started with Lempster last December, where already 40% of homes are hooked up, according to Tirrell, a retired firefighter and chief coordinator of Southwestern New Hampshire Fire Mutual Aid.

“People want to live a rural lifestyle, but they want to do their work at home. This is a great project for what it means for rural communities,” Tirrell said.

“We have several new positions that we are filling at the coop and we expect to be hiring even more,” Bird said.

When Bird clearly got nervous while giving his two-minute speech at NHEC in Plymouth, Harris walked over to reassure him.

“You are the one who’s telling us how it all works; you are the teacher,” Harris said.

Harris said this push to extend high-speed internet service nationwide reminded her of the 1936 Rural Electrification Act, which brought power to communities without electricity.

“We are going to have a national commitment to make sure everyone has access to the basic services they need, and right now in the year of our Lord 2021, that is broadband,” Harris said.

Sen. Maggie Hassan, D-N.H., said that during COVID-19 she spoke with parents who had to drive to the library or to school parking lots to get online so their children could keep up, taking their classes from home.

“As we all know, we learned broadband access and affordability was not a luxury during the pandemic,” Hassan said.

But cities and towns, along with cable companies, came back with proposals to spend slightly less than $15 million of the money before the end of 2020.

In a brief moment of high political intrigue, Hassan and Sununu were just feet apart, welcoming Harris at the Laconia Municipal Airport.

Meanwhile, political pros across the country prep for the prospect of a Hassan-Sununu showdown for Senate in 2022.

Sununu and Hassan live close to one another in the tiny town of Newfields.

Laconia Mayor Andrew Hosmer, who was with them on the tarmac, thanked Harris for serving as a mentor to his daughter, Brigid, who was a U.S. Senate page in 2018.

“I told the vice president she had more than one huge fan in our household,” said Hosmer, whose daughter now attends Washington University in St. Louis, Mo.

“It was a cool New Hampshire moment to give the vice president a shout-out for going out of her way as she did.”

“I am so excited to call her Madam Vice President for those of us who have waited for a long, long time for that,” Shaheen said.

A spokesperson for the Republican National Committee panned the trip.

“30 days ago, Joe Biden appointed Kamala Harris to fix the growing border crisis, but instead of finally going to the border, she came to New Hampshire to use Granite Staters as a political prop,” said Rachel Lee.

“Instead of grandstanding and gaslighting, Harris needs to stop laughing and get serious about the border crisis.”

A small group of protesters showed up along the motorcade route in Plymouth, holding signs that read “Hey Kamala: Stop the illegal invasion” and “Go visit Mexico.”

The national GOP is backing a $600 million infrastructure plan, less than a third of Biden’s $2.25 trillion plan, which doesn’t include money for broadband or child care, another Biden-Harris priority.

Marco Lacasse, business manager and finance secretary with the IBEW local, got emotional just before introducing U.S. Sen. Annie Kuster, D-N.H., about what $100 billion in retraining could mean for Americans who need upgraded skills.

“Our members are essential workers, they restore your power, work on renewable energy,” Lacasse said, his voice cracking.

“They are operating submarines and buildings at the Portsmouth Naval Shipyard and they are on the front lines at hospitals and pharmaceutical companies fighting to beat the virus.”

Harris made a quick, impromptu stop at Gibson’s Bookstore in Concord, leaving with a cloth tote bag with two books she bought, “Of Women and Salt” by Gabriela Garcia and “The Complete Mediterranean Cookbook” (America’s Test Kitchen).

Harris’ political fortunes in New Hampshire are clearly on the rebound after a less-than-impressive start.

Her 2020 presidential run ended in November 2019, two months before the first-in-the-nation primary and after only a few visits to the state.

Biden, her eventual political benefactor, finished fifth in his third bid to win the New Hampshire primary contest and left the state for his savior state of South Carolina before the final votes came in.