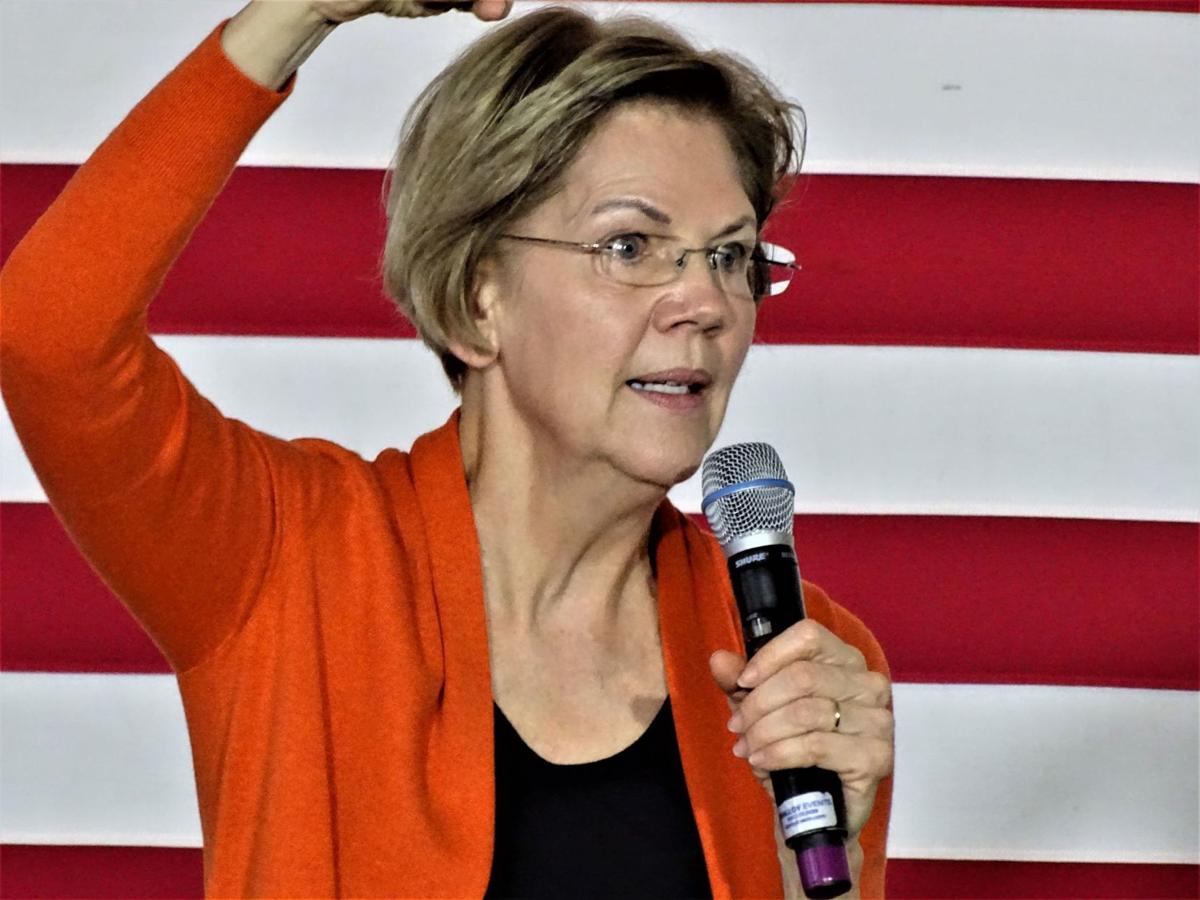 Democratic presidential candidate Elizabeth Warren talked about her plan to close estate tax loopholes for the wealthy to pay for opioid treatment over the course of the next ten years during a community conversation in Rochester on Saturday, Dec. 7. 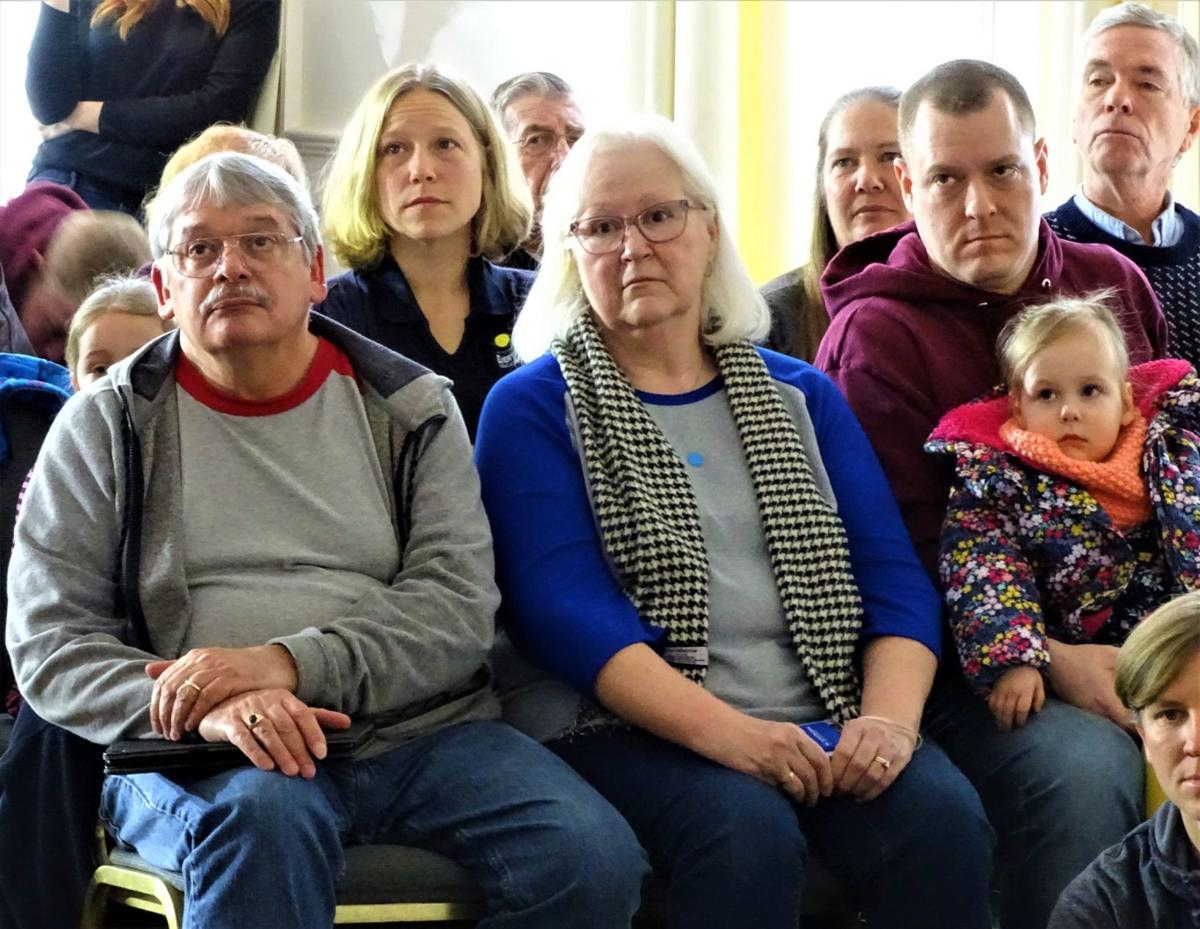 Doug and Debbie Stanton, of Rochester, sat next to Alex de Geofroy, of Rochester, and his daughter, Eleanor, during a community conversation with Elizabeth Warren on Saturday.

ROCHESTER – Democratic presidential candidate Elizabeth Warren talked about her $100 billion proposal to tackle the drug crisis Saturday during a community conversation in a city that has been hit hard by opioid addiction.

Warren was at The Governor’s Inn and Restaurant in Rochester.

Public defender Amaresh Srikanthan said that the way substance abuse disorders are treated in the criminal justice system varies from state to state, and even within counties in New Hampshire.

“How do you intend on incentivizing states and municipalities into believing drug addiction is something to be cured with public health options rather than the criminal justice system, and overall how do you plan on changing the conversation from incarceration to treatment?” Srikanthan asked.

Warren said, “193 people will die today from substance abuse. It’s like a plane crash, and it will happen again tomorrow, and the next day and the next day until we make real change in this country.” She said the problem with substance abuse is that Americans know what needs to happen to help those in crisis, but nobody wants to spend the money, in part, because of the stigma attached to opioid addiction.

Warren compared the drug crisis to the AIDS epidemic of the 1980s when funding research and treatment was difficult because of the stigma associated with the disease.

In 1990, Congress passed the Ryan White CARE Act. Warren said her comprehensive plan to end the opioid crisis is modeled after that.

Congressman Elijah Cummings, D-Md., worked on the plan with Warren before he passed away in October. Warren said they figured out how to pay for $100 billion in federal funding over the next 10 years that would put money into communities for programs that are successful on the local level.

“There’s going to be enough federal money there to be able to get treatment for our brothers and sisters who are caught in addiction,” Warren said. “When we put the money into treatment, we can treat addiction like the public health crisis that it is and take the pressure off our criminal justice system.”

After a second question about the drug crisis from Nicole Sczekan, a nurse midwife who works at Brigham and Women’s Hospital in Boston, Warren asked how many people in the room had families affected by addiction. Of the 170 people in attendance, about half raised their hands.

Warren also said those who profited from selling opioids should be held personally accountable.

“Think about what happens in our system,” she said. “If the company gets caught, the company pays a fine. But the people who actually make the decision — they get bonuses, right? They keep their jobs. They walk out free and easy,” Warren said.

Prior to Warren’s arrival, Doug and Debbie Stanton of Rochester said homelessness and the drug crisis are the two biggest issues affecting their city. Alex de Geofroy, of Rochester, agreed.

“We do have an opioid problem in this community. As a matter of fact, we had a dealer right across the street from us that we had to work with the police to get them out,” Doug Stanton said.

De Geofroy said the drug crisis concerns him too. His 2-year-old daughter, Eleanor, was sitting on his lap.

“I hate to say it because I like my house. I enjoy living in Rochester, but I wonder, do I still want to be here in a few years or do I want to move further down the seacoast where it’s not so questionable,” de Geofroy said.

Warren was in Peterborough and Henniker on Friday. She traveled to Rye for a town hall after the community conversation in Rochester on Saturday.

This marks Warren’s 24th trip to New Hampshire since January. She has visited 28 states and Puerto Rico during her presidential campaign, according to organizers.

Trump says he knows identity of author known as 'Anonymous'

WASHINGTON — President Donald Trump said on Tuesday that he knew the identity of an anonymous Trump administration official who wrote an essay for the New York Times and later a book about efforts from within to thwart parts of the president’s agenda to protect the country from his worst impulses.

Bloomberg moves into second behind Sanders among Democrats, Biden third

NEW YORK — Michael Bloomberg, a late entry into the Democratic presidential race, has moved into second place ahead of onetime front-runner Joe Biden, according to a Reuters/Ipsos national poll released on Tuesday that showed Bernie Sanders widening his lead over the field.

More than 26,000 Democrats show up for first two days of Nevada early voting

More than 26,000 people took part over the weekend in early voting in Nevada, the state with the next nominating contest in the Democratic White House race, and more than half on the first day were first-time caucus-goers, the state party said.

WASHINGTON — More than 1,000 former U.S. Justice Department officials on Sunday called for Attorney General William Barr to resign over his handling of the trial of a longtime adviser of President Donald Trump.