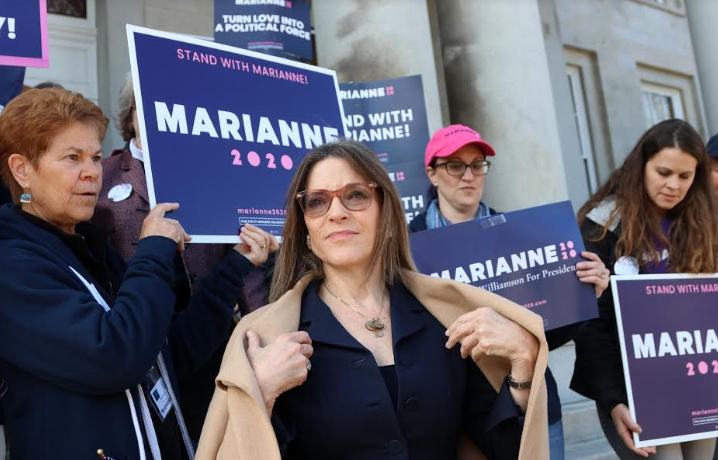 California teacher and author Marianne Williamson adjusts her coat at a rally outside the State House in November. 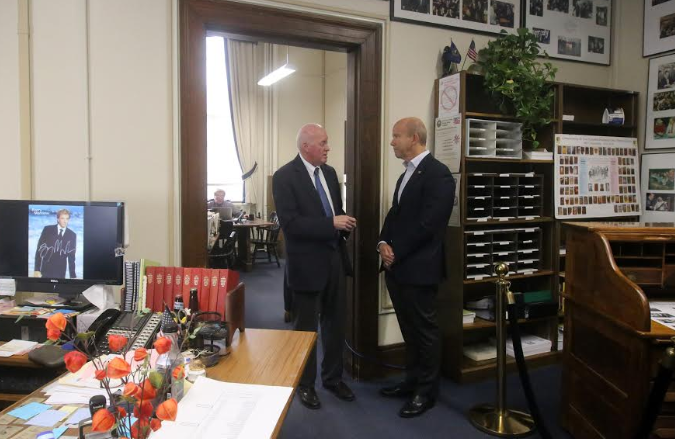 Democratic presidential candidate and ex-Maryland Congressman John Delaney, right, talks with Secretary of State Bill Gardner soon after he officially signed up to be on the first-in-the-nation primary ballot.

CONCORD — Marianne Williamson and John Delaney failed to make the most recent debate stage for Democratic presidential candidates but each got their moment in the first-in-the-nation spotlight Monday.

A few hours apart, the pair, who are each mired far down the standings in the polls here and nationally, signed up to run in New Hampshire’s primary.

Williamson, the 67-year-old California educator and author, said she’s optimistic New Hampshire voters will embrace her self-described, “radical truth telling” agenda that includes a federal department for peace, a new agency devoted to children and dramatic improvements in climate change and in the delivery of health care.

“America needs to reclaim its rambunctiousness, especially in New Hampshire which is the ‘hell no’ state,” Williamson told reporters.

She’s even more confident that 2020 will make history as the election in which American voters pick their first female President.

“I believe the American people are ready for that. We had our first black President. It crashed through a glass ceiling that was more than about race; it was so great,” Williamson said.

Delaney, a 56-year-old lawyer and former Maryland congressman, admitted that to remain in the race he needs to finish at least in the top five in either New Hampshire or in Iowa, which is holding the first caucus.

“Life is about how you do compared to expectations,” Delaney said.

In New Hampshire, Delaney said his pitch is aimed at what he called “independent-minded voters” who support a significant change from Trump but not as liberal or radical as single-payer health care or a wealth tax.

“A public option will do almost nothing to help health care in America,” said Delaney who has sharply criticized more well-known contenders who are promoting Medicare for All plans.

Like President Trump before her, Williamson has held no elective office before, but said her life experiences in education, publishing and faith ministry uniquely qualify her.

Williamson said she will soon unveil her health care plan that will embrace an enhanced role for the federal government but will be different than the Medicare for All proposals of Democratic rivals Elizabeth Warren and Bernie Sanders.

“I believe that ultimately health insurance should not just be a privilege but a right,” Williamson said, adding hers will be a “hybrid” between the current system and a government-only, single-payer program.

“I do want doctors to have entrepreneurial possibilities,” Williamson said.

She became the first candidate last week to air an ad promoting the payment of reparations to the descendants of slaves.

“You can’t have the future you want unless you are willing to clean up the past,” Williamson told supporters during a rally at Revelstoke Coffee, before she signed up to run.

While Williamson had a few dozen supporters cheering and waving signs in Secretary of State Bill Gardner’s office, Delaney’s filing was more low-key with just he and his wife, April, there to turn in his paperwork and pay the $1,000 filing fee.

Delaney has spent more than two years and several million dollars of the fortune he made as a young, successful businessman thus far.

He confessed the hope he would be more competitive by now but praised voters here and maintained there was plenty of time for him to stage a breakthrough.

“I think the democracy would be so much worse off if we didn’t have the early state process,” Delaney said.

He’s made more campaign stops in both states than any other candidate and boasted at being the only Democrat to have visited all 99 Iowa counties.

“I’m speaking to rural residents of Iowa; no one has even gone to these places I have,” Delaney said.

The candidate filing period runs through Friday, Nov. 15. Gardner has not set the date for the primary but it’s likely to be next Feb. 11.

Presidential candidate Marianne Williamson has laid off her entire campaign staff but is not suspending her campaign.

U.S. COVID-19 deaths could hit half million by February as surge continues

NEW YORK — The COVID-19 death toll could reach a half million in the United States by February unless nearly all Americans wear face masks, researchers said on Friday, a day after the number of new infections reported across the country approached a record high.

NEW YORK — With less than two weeks to go before the U.S. presidential election, investors may be placing too much confidence in a decisive win by Democratic challenger Joe Biden as his lead in opinion polls narrows.

Democratic presidential nominee Joe Biden said that if elected he would put together a bipartisan commission of scholars to examine reforming a federal judiciary he called “out of whack,” noting that there are alternatives to consider besides expanding the Supreme Court.

WASHINGTON — House Speaker Nancy Pelosi (D-Calif.) said Thursday negotiators were making progress in talks with the Trump administration for another round of financial aid amid the COVID-19 pandemic and that legislation could be hammered out “pretty soon.”