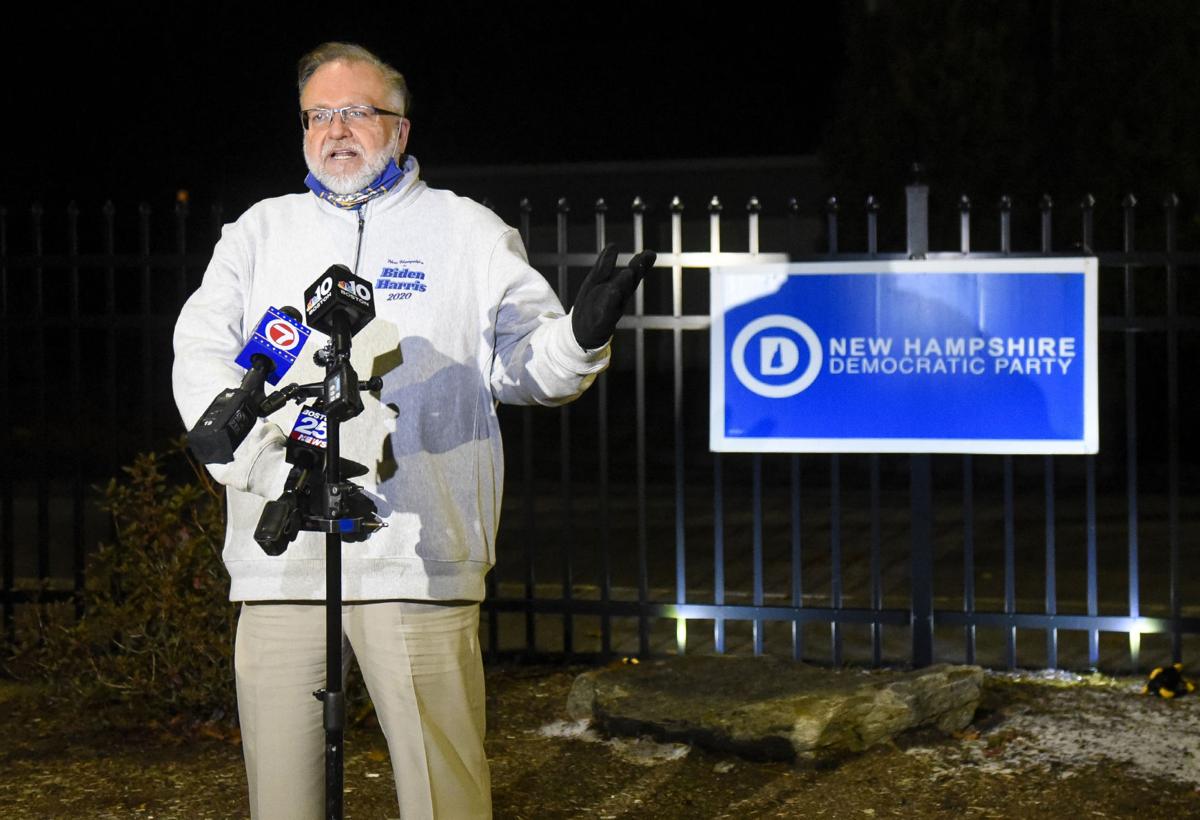 State Democratic Party Chair Ray Buckley talks to the media on election night outside the Puritan Backroom in Manchester. Buckley said voters were focused on Washington, not on Concord, when they cast their ballots. 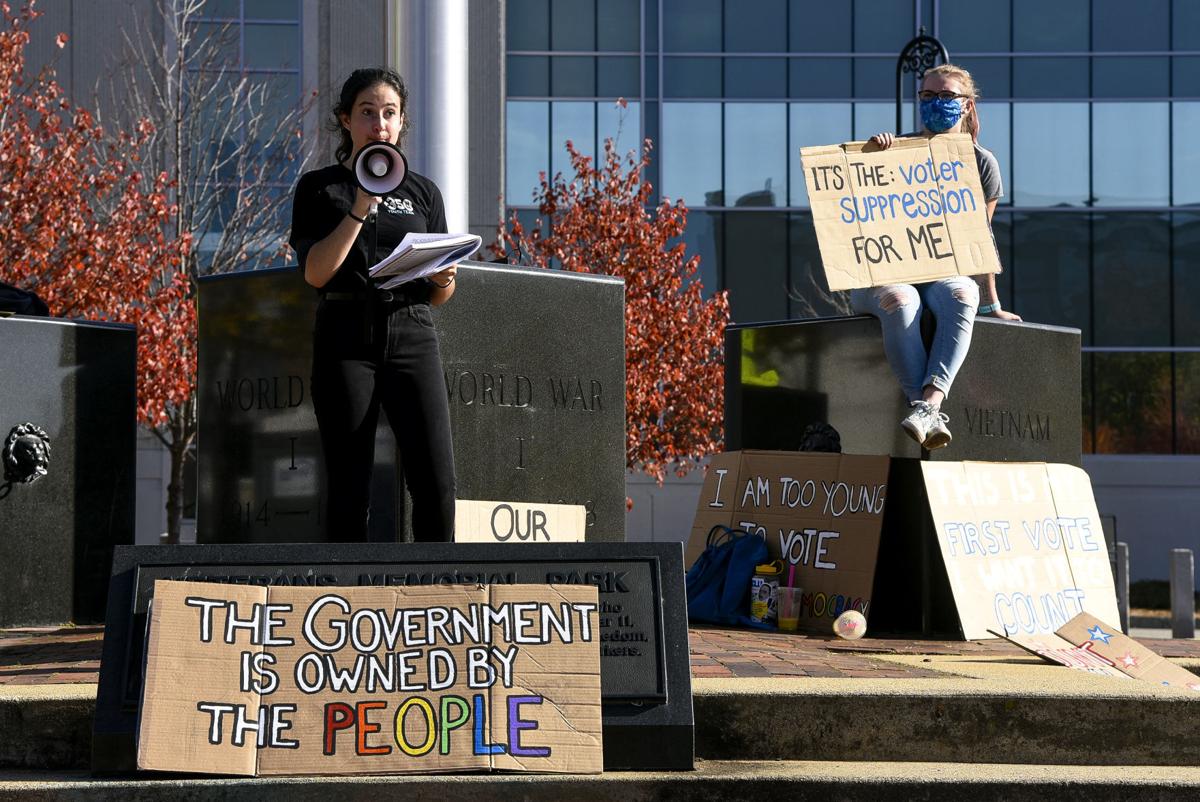 Shira Sadeh, from Manchester with 350 NH Action, speaks during a Count Every Vote Rally held at Veterans Memorial Park in Manchester on Saturday.

State Democratic Party Chair Ray Buckley talks to the media on election night outside the Puritan Backroom in Manchester. Buckley said voters were focused on Washington, not on Concord, when they cast their ballots.

Shira Sadeh, from Manchester with 350 NH Action, speaks during a Count Every Vote Rally held at Veterans Memorial Park in Manchester on Saturday.

With Republicans now in the majority in Concord after last Tuesday’s election, Democrats and progressives around New Hampshire are trying to figure out how they could have delivered a record number of votes for a Democratic presidential candidate but lost their advantages in the State House, Senate and Executive Council.

Defeated candidates like Rep. Kathy Stack of Merrimack have a few ideas.

“We got outmaneuvered, we got outspent,” Stack said Friday. “We certainly got clobbered.”

Stack and two other Democrats won 2018 state representative races in conservative Merrimack by focusing on PFAS pollution in Merrimack’s water.

The state Democratic party wasn’t much involved there in 2018, but Republicans didn’t put up a fight, expecting little opposition from Democrats in Merrimack. But Republicans were ready this year, Stack said, having started campaigning almost two years ago. Democrats didn’t begin campaigning in earnest until last summer.

“I don’t feel we had any assistance from the Democratic Party top level to combat the message, to point out and emphasize our message: No, we don’t want an income tax, no, we don’t want to take your guns, yes, we want clean water,” Stack said.

She asked for help from the party, money for mailers and help with strategy to counter the Republicans’ message. Nothing came, she said.

As party leaders try to focus on priorities — like the successful reelection of Sen. Jeanne Shaheen and U.S. Reps. Annie Kuster and Chris Pappas — those at the grassroots level wonder if the their party needs to focus less on marquee races.

In a statement Wednesday, state Democratic Party Chairman Ray Buckley said he thought it was clear voters were heavily engaged in federal races.

“It’s clear that New Hampshire voters were focused on the Trump sideshow in Washington and not on the GOP circus in Concord, and while last night’s state results may not be what we’d hoped, voters have elected a slate of strong Democratic leaders, and I am proud of the honest, local, and positive campaigns they ran this year,” Buckley said.

On the ground, activists said the party didn’t do enough to shift attention to Concord.

“The NH Democratic Party has always looked at state government as the pesky stepchild while their beloved was all things federal from the presidential primary to the federal offices,” wrote Arnie Arnesen, the progressive talk radio host and onetime candidate for governor, on her Facebook page Thursday.

Alison Frisella, a Dover resident and college student, said that when she volunteered on Democratic campaigns in 2018, the emphasis was more clearly on the State House.

Stack and Frisella said the lack of door-to-door canvassing this year hurt state-level candidates. Republicans were able to introduce themselves to people in their districts in person, but at the state party’s insistence, Democrats could only call, text and video-conference with voters.

Although Buckley and other party leaders have said Zoom sessions and Facebook Live events attracted more people than in-person events did, some are skeptical the online effort brought in anyone who wasn’t already plugged into Democratic politics.

Frisella said she thinks the push to turn out moderate Republicans and swing voters for Biden could have hurt down-ballot Democrats. A “Never-Trump Republican” likely wouldn’t vote a straight Democratic ticket.

“Dan was one of the more progressive candidates in the state,” said Emma Sands, a spokeswoman for Feltes’ campaign. Sununu was just incredibly popular, she said.

Feltes had a record of supporting policies like raising the minimum wage and had a climate-change platform that was nearly as aggressive as primary opponent Andru Volinsky’s. He had pledged to install a pro-choice woman on the state Supreme Court and was vocal in his support of the Affordable Care Act.

Sands noted Feltes got more votes than Molly Kelly, the 2018 Democratic candidate for governor. “It wasn’t a lack of enthusiasm,” she said.

Activist M.K. Kilcoyne of Dover said at a rally Wednesday that Democrats could have done more than just try to align Sununu with Trump.

Kilcoyne said young voters would rather have seen arguments from Democrats about how Republican policies, especially the minimum wage, are pushing young people out of New Hampshire.

Why would someone work here, Kilcoyne wondered, when a similar job in Maine or Massachusetts pays more — and when people in Maine and Massachusetts can also stop at a dispensary after work to buy cannabis for recreational use?

“The party tends to ignore young voters and what they’re concerned about,” said Jackson Brannen of Dover, another activist. “I think they could do a better job, always.”

“There are many concerns that are being expressed,” Buckley said in an email Friday. “We hear them and value their opinions, and we are committed to listening to all voices with concerns. All issues will be thoroughly addressed by the autopsy with recommendations for 2022.”

Brannen said young activists did not plan to wait around until 2022 to make waves in New Hampshire.

Democrat Joe Biden said Friday that he was going to win the presidency as his lead grew over President Donald Trump in battleground states, al…

CONCORD — Activists demanded swift action by the Sununu administration on dealing with the state’s homeless problem during a State House protest Friday.

CONCORD – Young Democratic activists criticized Gov. Chris Sununu’s decision last week to evict the homeless from state courthouse property, and called upon him to more quickly come up with a comprehensive plan to help those who lack a permanent place to live.

CONCORD — A group of five incumbents and two newly elected Republican House members are pursuing a resolution in the 2021 legislative session to investigate the impeachment of Gov. Chris Sununu for abuse of his constitutional authority during the COVID-19 pandemic.