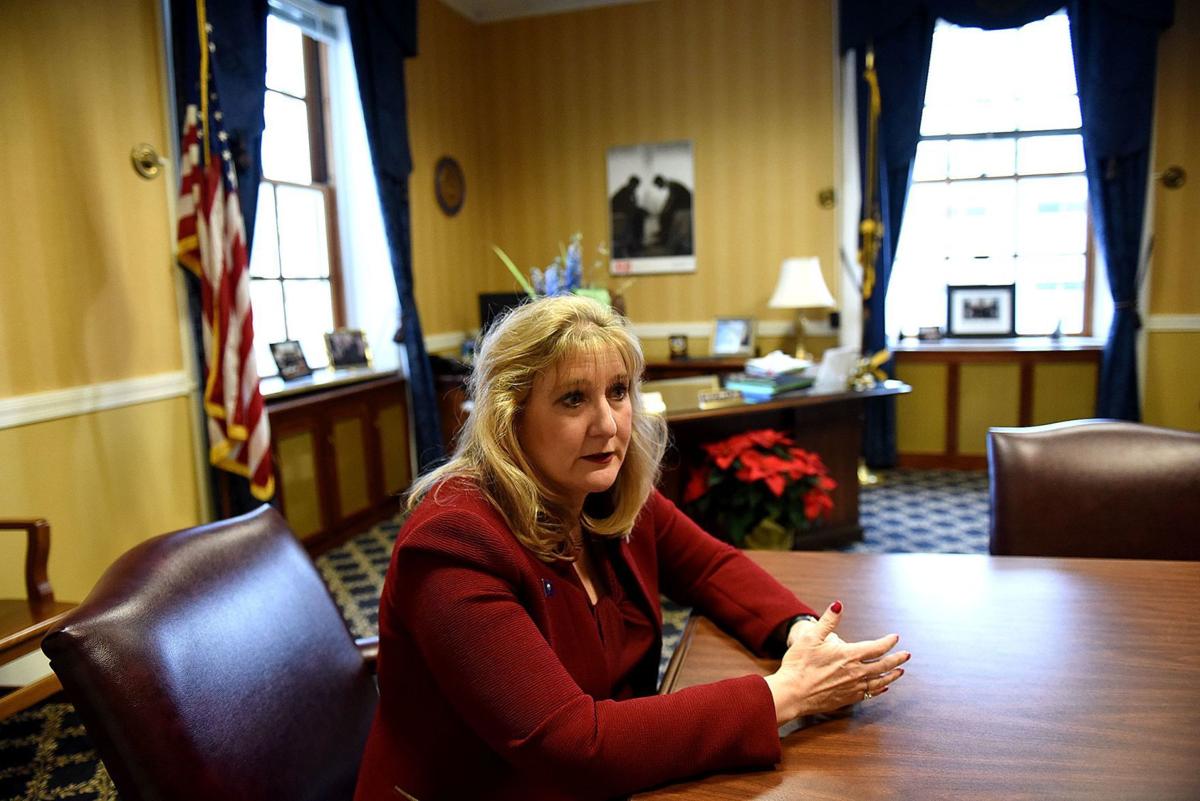 Senate President Donna Soucy of Manchester talks with the New Hampshire Union Leader from her corner office in the State House last week. 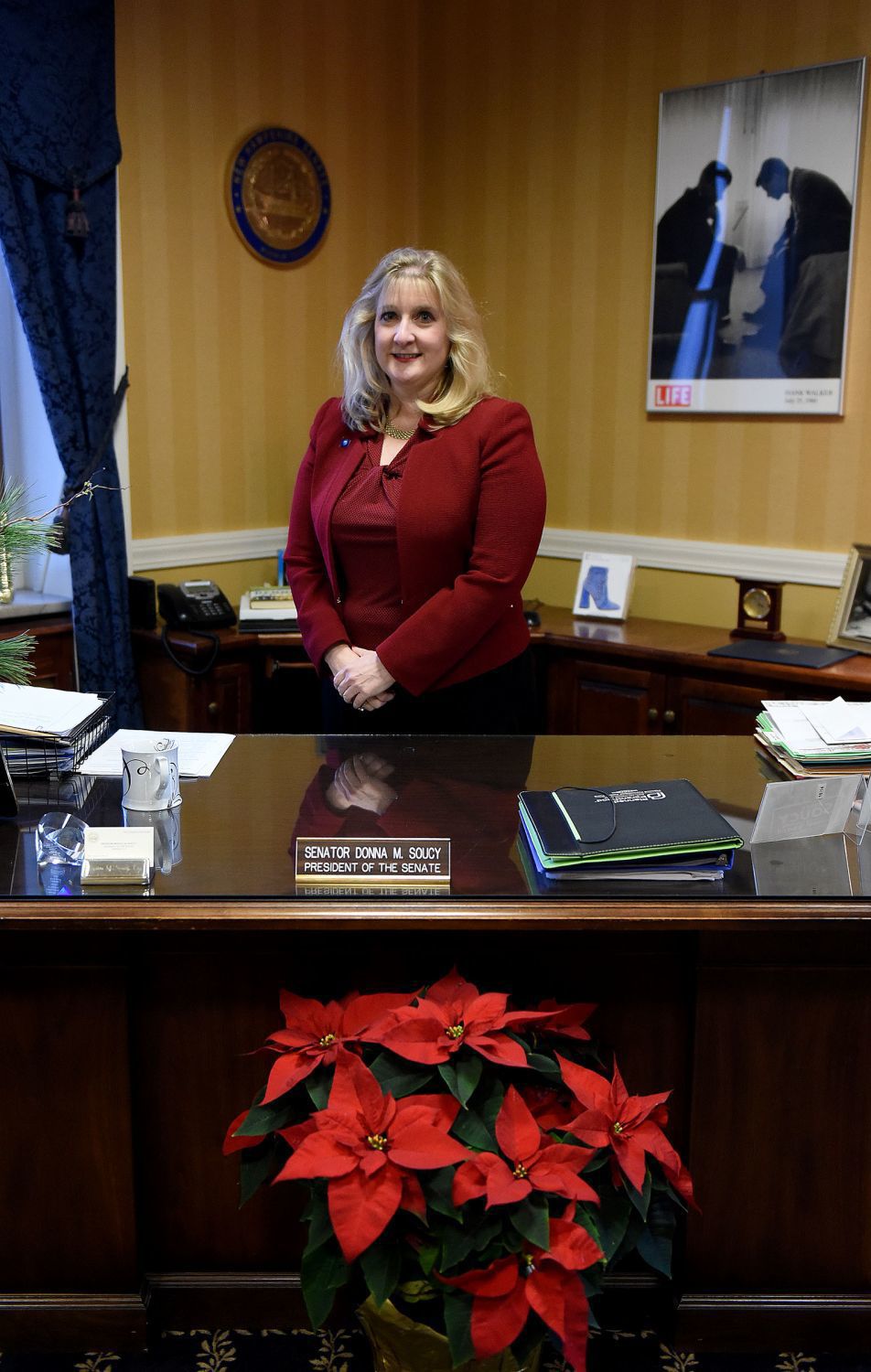 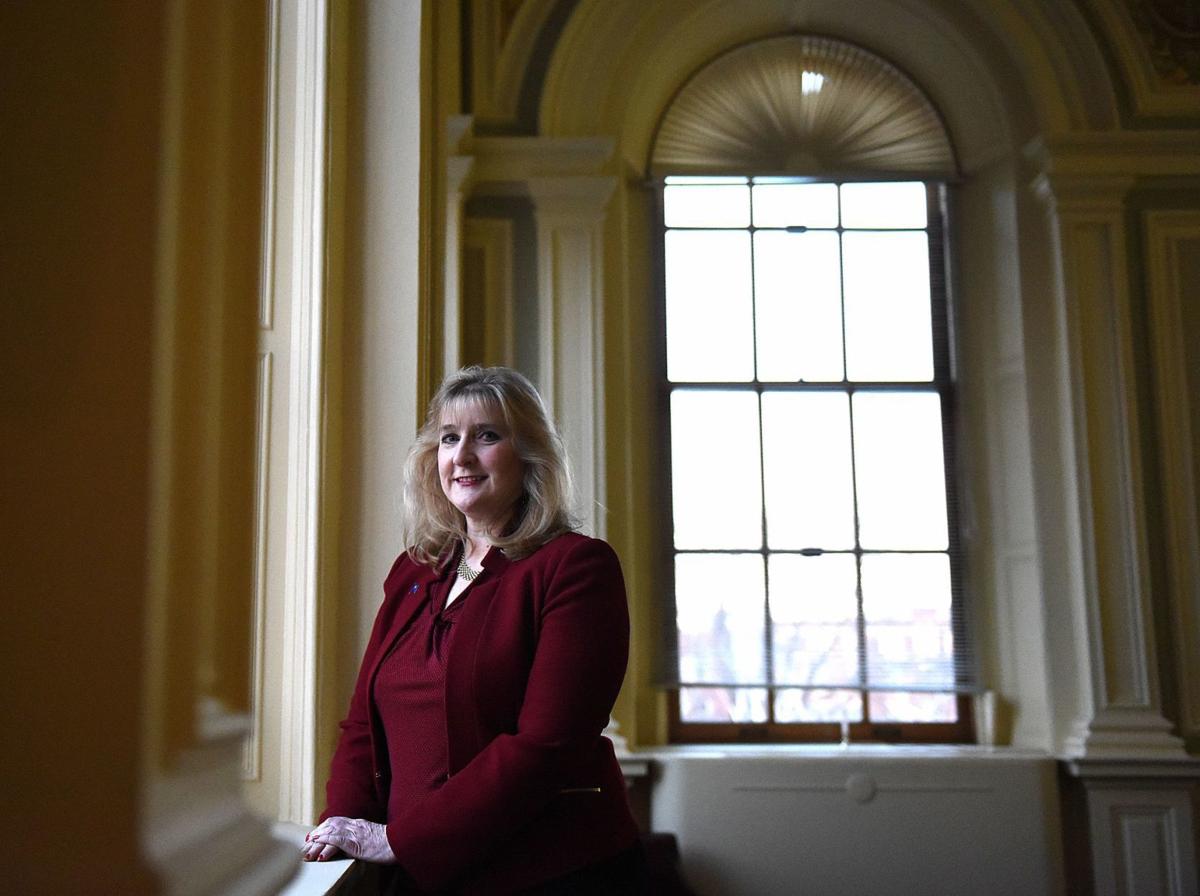 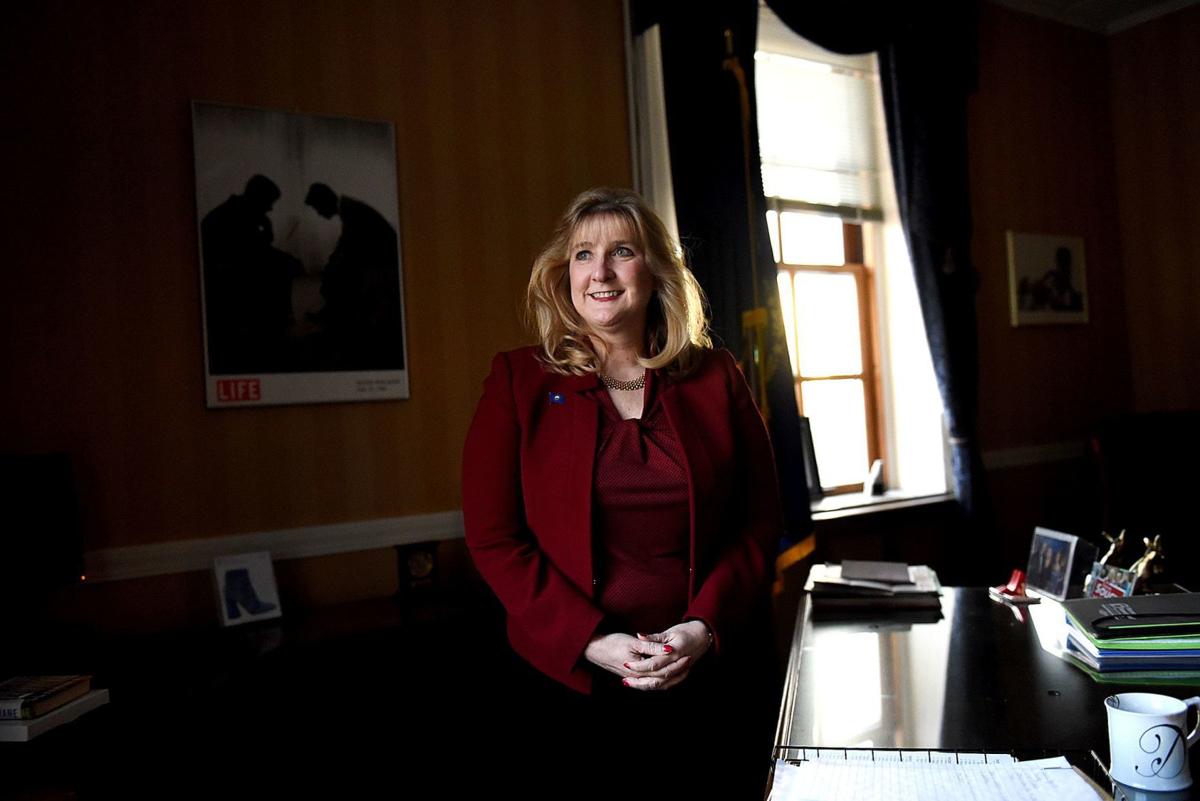 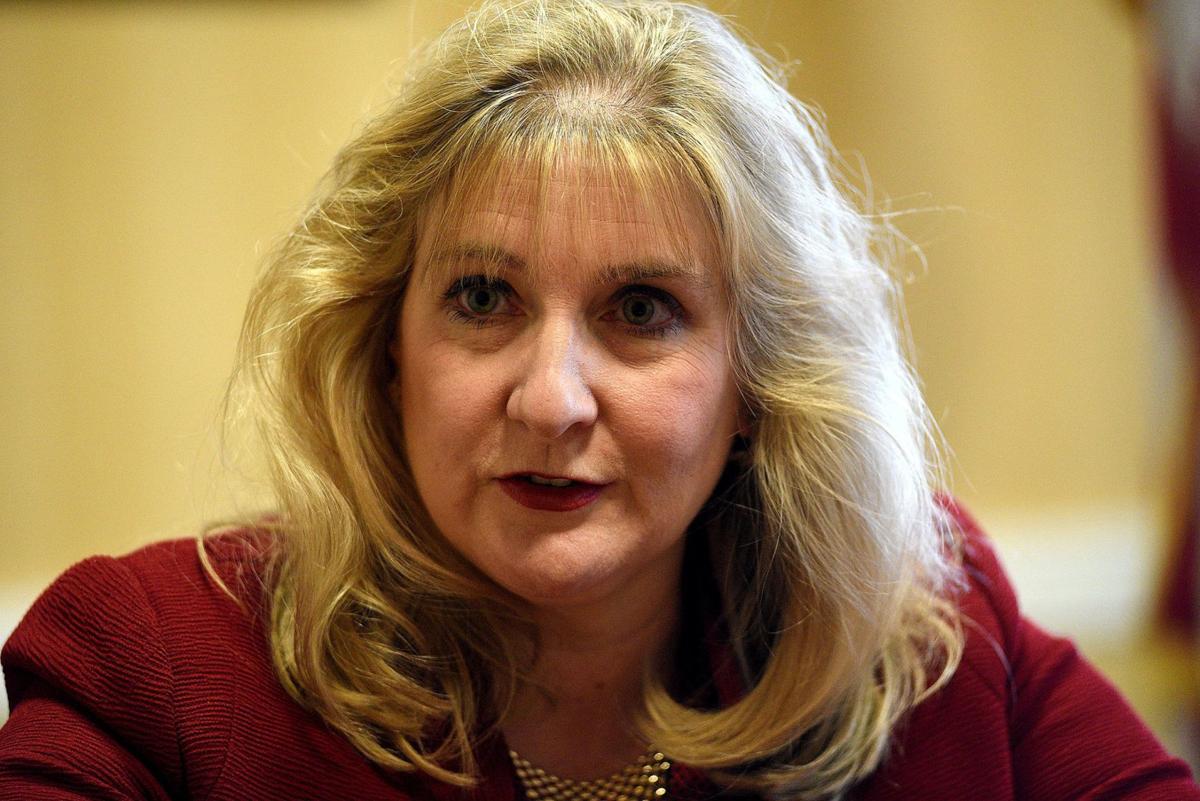 Senate President Donna Soucy of Manchester talks with the New Hampshire Union Leader from her corner office in the State House last week.

CONCORD — Newly elected Senate President Donna Soucy, D-Manchester, said there are similarities between herself and Republican Gov. Chris Sununu, and she hopes that helps them form a cooperative relationship over the next two years.

Both Soucy, 51, and Sununu, 44, come from storied political families.

Soucy is the daughter of the late state representative Lillian Soucy, who held the same House seat Soucy would occupy for six years, and the late C.R. Soucy, a legendary political ward heeler and local retailer.

A seasoned House budget writer, Soucy’s mother succumbed to cancer in 1990; her father passed away a year and a half ago.

Soucy says her father “was very involved in sponsoring youth sports activities when he owned a store, very involved in our church. He was always the person if someone needed help or was having a hard time, he would be the guy who would ring the doorbell, leave and there would be a bag full of groceries for a family that needed help,” Soucy said.

“He was that kind of person, very giving, generous person. He loved politics, was always involved in party politics. In 2012 he got to be a presidential elector.”

In an interview with the Union Leader, Soucy said she has only met privately with Sununu a few times but is in the process of setting up a schedule for regular meetings going forward.

“I think we are both beneficiaries of some of the goodwill built up that our parents had,” Soucy said.

“I think that we will find many areas where we can work together on issues. There are certainly going to be many (where) we go our separate ways, but I certainly remain committed to working with the governor whenever possible.”

Just elected to her fourth two-year term in the Senate, Soucy says she learned valuable lessons from past Senate presidents on both sides of the aisle. Before winning her own Senate seat in 2012, she served for four years as chief of staff to the last Democrat to run the Senate, Sylvia Larsen of Concord.

“One of the biggest things I have learned collectively from all of them is that your word is your bond, and I learned that from my family as well. Once you give that, you can’t take it back,” Soucy said.

“That’s why it is so important to listen and be open to the evolution of different ideas and debates because you end up with a much better product.”

Soucy said more than half of those in the 24-member Senate have full-time jobs and she will keep hers, as legal counsel to the Professional Fire Fighters of New Hampshire.

Since the end of last February, Soucy has worked on contract negotiations, grievances and individual discipline cases involving union firefighters.

“I will continue to do that work. We are a volunteer Legislature and I still need to work outside the work I do here,” Soucy said.

“The hours (with PFFNH) are flexible,” she said. “It depends on the timing of the negotiations and disciplinary matters and things to come up.”

Soucy disclosed a couple of professional conflicts with legislation, but still took part in those debates, as allowed under Senate rules.

“I have not found it has caused any problem,” she said. “I disclosed my income as would anyone else.”

Sununu came under heavy criticism during the 2018 campaign over it, but Soucy thinks a paid family and medical leave bill could be an area of common interest with the governor.

Last year Sununu opposed a House-passed plan over its high administrative cost and requirement that all workers pay what he considered to be a new tax.

Sununu favored a voluntary program to let workers opt in to the benefit.

Family and medical leave “is something we feel very strongly about. The governor says he has his own proposal; I haven’t seen that yet. I look forward to seeing how that looks,” Soucy said.

Coming up with a plan could help solve what she views as the state’s biggest economic challenge: that employers can’t find enough highly skilled workers to fill vacant jobs.

“Some companies are facing the challenge of just trying to find the right match and sometimes salary alone isn’t the enticement, and that’s why we need to find quality-of-life benefits,” Soucy said.

There are topics Soucy said her Democratic majority will pursue that could get less support from the two-term Republican governor, such as gun control and raising the minimum wage.

Soucy said she’s not wedded to any specific gun-control measure but praised the 2018 bill by Sen. Martha Hennessey, D-Hanover, that would have allowed school boards to restrict the possession of guns in school zones. Another option, Soucy said, could be a state ban on bump stocks given that President Trump has endorsed an executive order on the issue at the federal level.

“This was a piece of legislation that was considered last time and went down on party lines,” Soucy said. “I wonder if we could find a different result this time given that it is a Republican administration’s initiative that is producing that.”

Soucy favors a three-phase increase in the state’s minimum wage with a new wrinkle to help companies reach that level: “This would be on a graduated basis, but it would also recognize companies that give more in benefits such as paid sick days, so you could have a two-tiered system,” Soucy said. Companies that offer such extra benefits could pay a lower minimum wage than others.

“The reimbursement rates are something that is critical this time around,” she said. “We have full capacity at New Hampshire Hospital, and hospitals throughout the state have people waiting to access care. They are being kept in emergency rooms much longer than they should be and longer than hospital executives want them to, but they don’t have access to the level of care that they need.”

The state Senate has a long history of women rising to positions of power.

Soucy becomes the fourth woman to be Senate president — two from each party — a tradition that goes back 30 years.

“I think it says a lot about our population in that voters look at the person and not just the gender or the party,” Soucy said. “There have been a lot of women leaders who served in the Senate and went on to become great figures.”

Soucy said that should not signal that she will go on to seek higher political office.

“I am not focused on that,” she said. “I’m not looking beyond this year and next doing good work and re-electing a Democratic majority in 2020. This is a key session for us.”

MEREDITH — In an upset, a longtime Republican Party leader lost his seat on the Republican National Committee on Saturday.