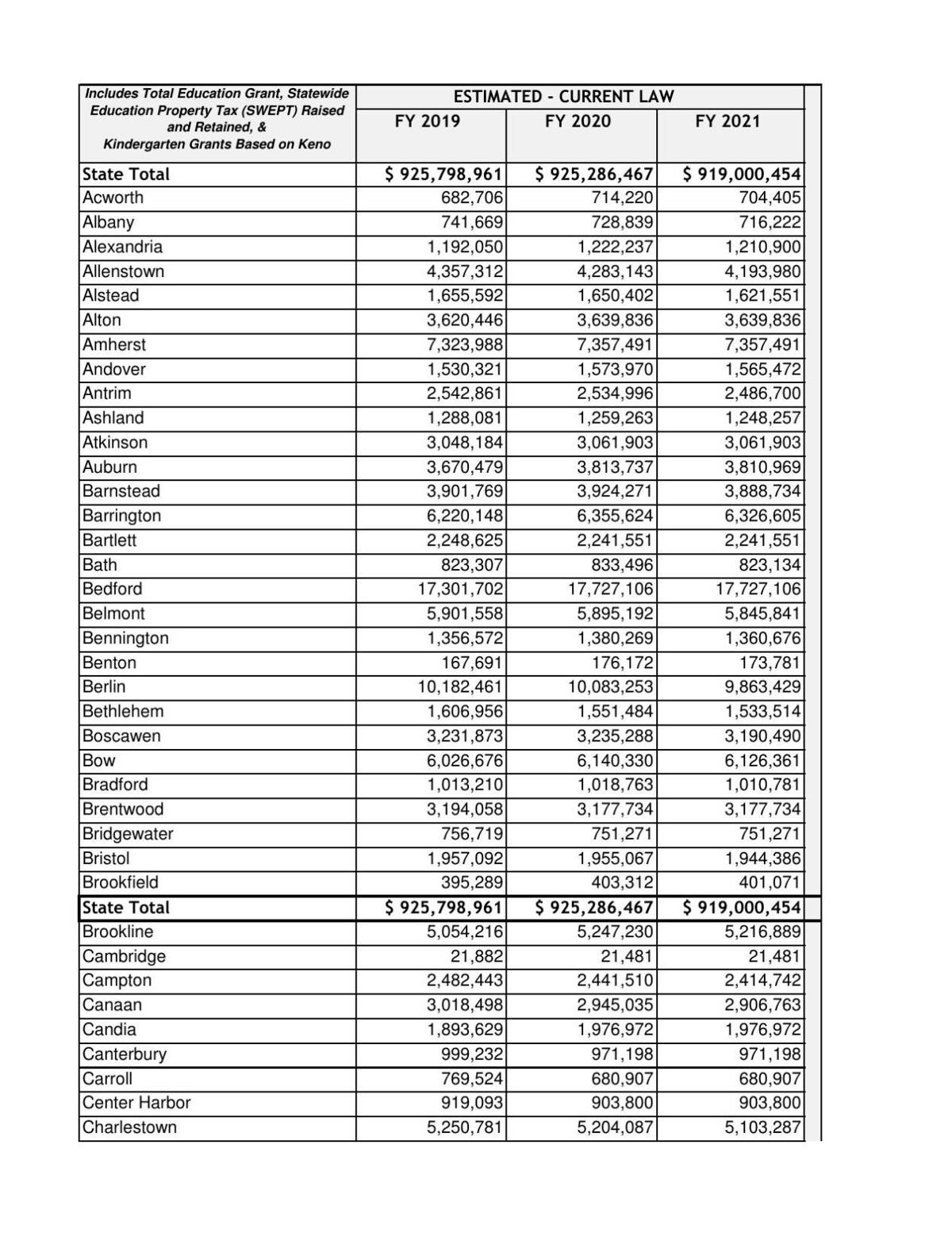 CONCORD — House budget writers have completed work on a two-year state budget that’s at odds with the plan submitted by Gov. Chris Sununu in several key areas, including education funding.

“What you’re going to see in our budget is a first step toward helping schools and our towns have better funding for public education,” says Rep. Mary Jane Wallner, D-Concord, chair of the House Finance Committee.

The committee voted along party lines on Wednesday, 13-9, to send the budget to the full House for a vote on April 11.

The governor has focused his fire on the committee’s decision to remove his plans for a $26 million secure, psychiatric hospital from the budget, but there are many other areas in which the Democratic House and Republican governor part ways.

Education funding is at the top of that list. The budget on its way to the House restores grants designed to mitigate the impact of declining enrollment, provides more stable funding for full-day kindergarten and favors communities with low property values.

It calls for the stabilization grants to continue at the 2016 levels. Under current law, the grants are being reduced by 4 percent annually.

The new capital gains tax would be levied on the profits from the sale of assets like stocks, bonds or real estate (not including primary residence). It would raise an estimated $150 million a year that House budget writers would like to see used to help property-poor school districts.

“When you look at a district like Berlin, they’ve been losing their stabilization money, in a community where 69 percent of the property is non-taxable. That puts the burden on 40 percent. We need to give these districts some relief,” said Rep. Patricia Lovejoy, D-Stratham.

The House budget keeps the existing school funding formula in place, so that every school district gets its base adequacy grant, but targets additional aid to property poor districts and those with high numbers of students on free and reduced lunch.

According to the House plan, Manchester could see $20 million in additional state aid over the two years, 2020-21, compared to what it would get under existing law. Berlin could see an additional $4.3 million and Claremont an additional $5.3 million, based on estimates provided by House staff.

“We’ll be following the existing funding formula, but we’ll be targeting designated communities for additional aid,” said Lovejoy. “The existing formula does not account for disparities in property values among towns in the state.”

The proposed House budget also eliminates reductions in business taxes that were scheduled to take effect in 2019 and 2020, and includes a universal paid family leave program funded through payroll deductions of 0.5 percent.

“From an income tax masquerading as paid family leave program to a job-killing capital gains tax and raising taxes on New Hampshire’s employers, the Democratic leadership of the House Finance Committee has put New Hampshire’s hardworking taxpayers on the hook for $300 million in additional spending,” said Sununu.

Senate Republican leader Chuck Morse, R-Salem, warned that a budget like the one headed to the House is likely to face a gubernatorial veto.

“If House budget writers are serious about passing a budget for the governor to sign they would not include tax increases,” he said.

The Finance Committee will hold a briefing on the proposed budget in Representatives Hall on Tuesday from 10 to 11:30 a.m.

The state’s veterinarian lobby stiffly fought the bill (HB 1387) on the grounds that it usurped their authority and outlawed a procedure that is rarely done.