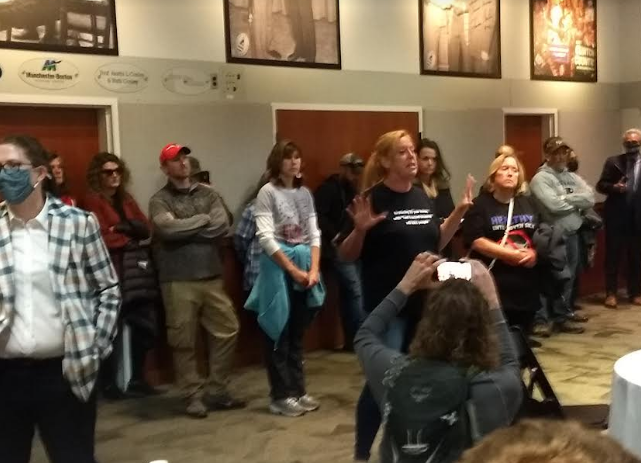 Therese Grinnell of Loudon, center, a nurse in Concord opposed to COVID-19 vaccine mandates, speaks to those who came to attend an Executive Council meeting Wednesday at Saint Anselm College. Grinnell was one of a small number of protesters who repeatedly yelled at Gov. Chris Sununu and the Executive Council before they canceled the meeting, citing threats to public safety. 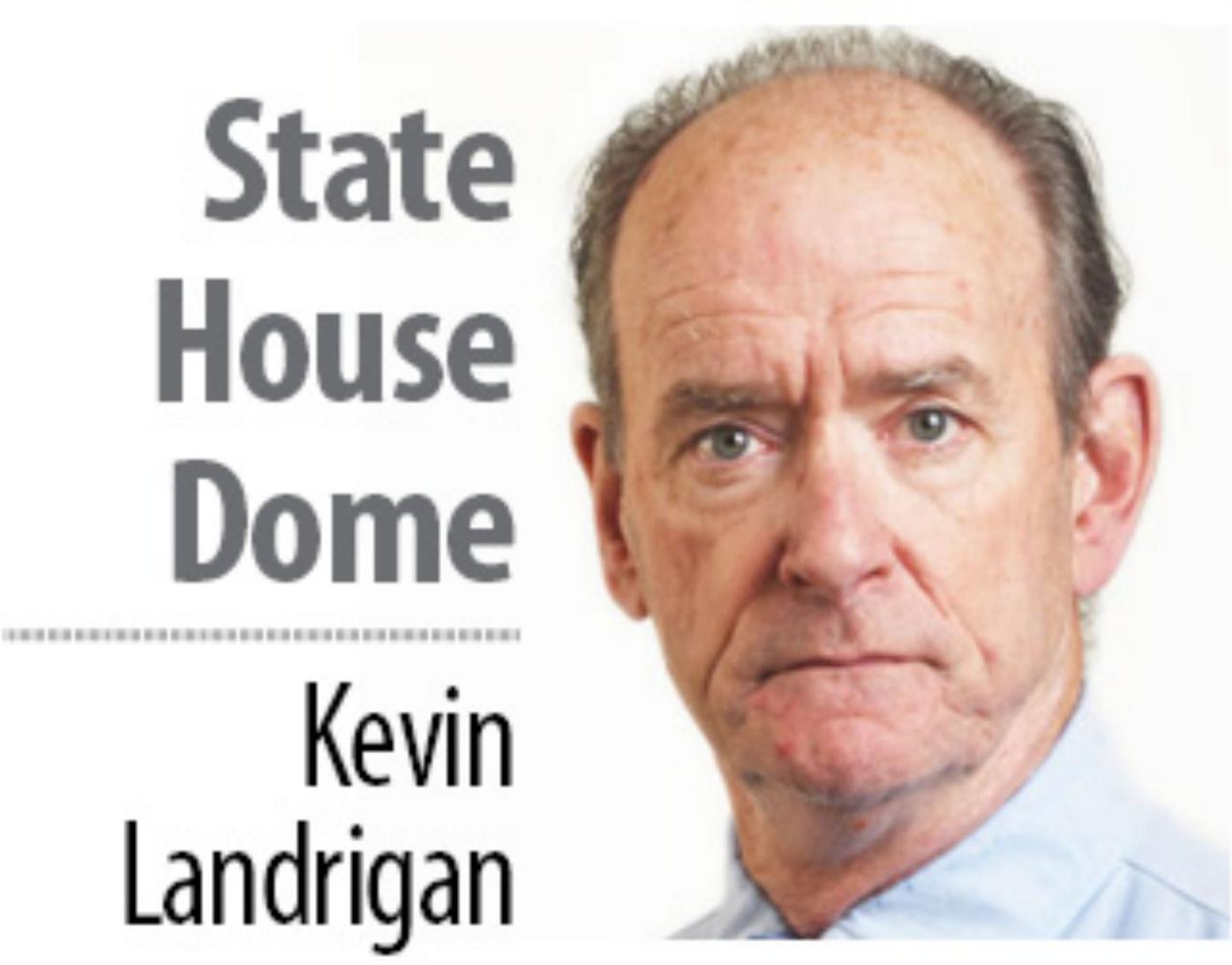 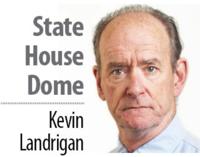 MANY WATCHING the loud protest at last Wednesday’s Executive Council meeting wondered why law enforcement did not remove the most belligerent from the venue.

The most boisterous one, Frank Staples of Manchester, was arrested last year for disorderly conduct while protesting outside Gov. Chris Sununu‘s home in Newfields.

“So why didn’t he have State Police clear the room? Call in back up? Do something to get the situation peacefully under control so the Executive Council business could continue safely? Inquiring minds want to know #ComplicitChris,” American Federation of Teachers President Debra Howes posted on social media.

Unionized teacher leaders were especially upset because their local school boards faced vocal protests of their own with less police presence as they considered reinstating mask mandates and other restrictions to prevent the further spread of COVID-19.

The governor suggested there were no ejections or arrests Wednesday out of concern that either would have only inflamed an already-overheated situation.

Sununu said he has talked with local officials about how to maintain order at their sessions.

“Talk to their local law enforcement, if they think things are going to get a little bit out of hand. Prepare. Don’t go in naïve. But, we have seen heated passionate arguments on both sides of a discussion,” Sununu said.

Later he added, “So it’s really nothing new except, I mean, what we saw today was really that line being crossed, right? That was new in what we’re seeing.”

So why were five protesters arrested outside his office last June while demonstrating against the state budget? Wasn’t that a double standard?

“I think they — if I remember correctly, I think they had stayed past closing, right? I don’t even think anyone was really in my office at the time that those individuals were arrested, because it was after 5 p.m.,” Sununu recalled.

One question is whether Attorney General John Formella’s review results in criminal charges against Staples or any others.

Brennan Christen, 23, who was at the event, said he has tried to serve as a go-between of the many disparate groups — from RebuildNH to Absolute Defiance — that opposed Sununu’s COVID-19 actions.

“They could have cited Frank and perhaps one other individual for disorderly conduct,” Christen said.

He noted that before the meeting, Staples had sent an email to all the councilors, threatening to protest outside their homes if they supported immunization contracts.

Formella later announced a review into whether criminal laws were broken during the protest.

As noted, there could be grounds to charge Staples — if not one or two others — with disorderly conduct.

But might such a move only cause other like-minded individuals to show up at the next council meeting in search of media attention?

The AG could use this report to note that it’s a gray area, since Staples and others were never told they could be arrested at the meeting if they persisted.

He then could use the review to warn others that such outbursts won’t be tolerated and any violators will immediately be evicted from a public meeting.

Meanwhile, Sununu and Co. are seeking the best venue for the council’s next meeting. The University of New Hampshire in Durham seems unlikely.

Sen. Lou D’Allesandro, D-Manchester and a prominent alum, said he’s been told it’s already out of the question.

UNH officials have every reason not to want to host the next meeting.

COVID-19 currently is well under control on campus. An event with a large cohort of vocal anti-vaccine mandate protesters would be sure to draw plenty of college students looking to launch a counter-protest.

Closer to the State House, a few locales that no doubt will be considered are the New Hampshire National Guard Training Center in Pembroke and the Division of Motor Vehicles auditorium in Concord.

The council held several meetings during the pandemic at the guard training center, and they’ve held some public hearings on judicial nominees at the DMV property.

Both are secure and would be easy for law enforcement to manage behavior inside and outside the government-owned venues.

As the New Hampshire Bulletin first reported, Sununu canceled the third event he had scheduled to thank New Hampshire citizens for sacrifices made during the pandemic.

Sununu had scheduled Sunday’s HarvestFest in Walpole to be the final substitute event for the inaugural balls he canceled last January because of COVID-19.

The New Hampshire Democratic Party returned to a tried-and-true way to try and keep a simmering controversy alive, file a Right to Know Law request for more information related to the canceled council meeting.

The letter asks Sununu’s office to produce all correspondence between the governor and the anti-vaccine mandate protesters who attended the meeting.

“It is deeply alarming to know that Chris Sununu has been texting the very anti-vaxxer extremists who used violence and threats to shut down our democratic process,” NHDP Chair Ray Buckley said. “Granite Staters deserve to know what Chris Sununu has been saying to these extremists, if he’s been encouraging their dangerous rhetoric and behavior, and if he’s promising them that he’ll help push their dangerous agenda.”

During his weekly COVID-19 briefing last Wednesday, Sununu volunteered he had previous contact with several protesters who were at the New Hampshire Institute of Politics event.

For all those who want more towns to get their own state representative during redistricting, David Andrews of Open Democracy N.H. has offered a solution.

Andrews presented to the House Special Committee on Redistricting last week his methodology to alter the design used by the House GOP leadership 10 years ago.

We’ll try to keep this simple. This topic can quickly give anyone a Popsicle headache because it’s deeply rooted in complex mathematical equations.

At issue is how to draw floterial districts, which combine multiple wards or towns to form large districts meant to account for excess population within each county.

Using the same Component method as the GOP used in 2010, Andrews determined that 60 towns won’t get their own state rep despite having enough people and not being landlocked.

Andrews said he made a tweak to the method that lowered the number of possible towns without their own state rep to 19.

“Is there any legal backing for this? Has it ever been tried in court?”

The method the GOP used was challenged in court and upheld by the Supreme Court.

The justices did redraw some of the House districts, only to have the Legislature in response amend some of those districts further.

Redistricting Committee Chairman Barbara Griffin, R-Goffstown, said she remains committed to having the panel complete its work on the House and congressional redistricting maps by its Nov. 18 deadline.

Democratic and GOP members of the panel did agree on two key parameters – retaining 400 seats in the House as it redraws that map and presuming cities will keep the same number of equal-sized wards as local officials redraw their ward line boundaries to comply with the 2020 Census.

Rep. Paul Bergeron, D-Nashua, said almost all cities won’t complete redrawing their ward lines by mid-November. Again a decade ago, the Legislature tweaked its own redistricting bills in the State Senate because of ward line changes made in 2011.

The Senate’s own redistricting committee kicks off its own “community input” sessions in all 10 counties starting Tuesday in Brentwood and Thursday in Lancaster. Both are at the county’s superior courthouse and start at 6 p.m.

Some were stunned the House Judiciary Committee last week voted, 11-10, to endorse an amendment that would eliminate the mandatory ultrasounds contained in the ban on late-term abortions that Sununu signed last June.

In response, House GOP leaders said they were willing to have a “discussion” about the change.

Less than two weeks after Sununu signed the budget, he told us the ultrasounds mandate didn’t appear necessary and he could support legislation to take it out.

This will be a good test of how much Sununu can manage the rough-and-tumble in the GOP majority in the Legislature next year if he runs for the U.S. Senate.

All he needs to repeal the ultrasounds provision is to get the support of three of 14 GOP state senators and about 15 or so House GOP supporters.Don’t spend it in one place

This lowered from 9% to 8.5% the tax on restaurant meals and hotel room rentals.

Sununu celebrated the move, which came on the dawn of the fall leaf-peeping tourism season.

The state’s current hospitality tax rate is the highest in New England and among the 15 highest in the country. Many big cities and counties tack on their own local occupancy taxes that go well above New Hampshire’s 9%.

Still this tax has edged up over the years and hasn’t been lowered in decades.

Sununu and state budget writers also have the comfort of knowing a growing hospitality industry means even at the lower rate, the tax will bring in even more money during good economic times, year after year.

Executive Director Neal Levesque said in the wake of the protest, the Saint Anselm College’s politics center won’t be the site of future public hearings. He said Friday that he received his own personal threats before the meeting.

“The people I was dealing with yesterday…they are people interested in causing as much commotion, disruption, and potentially violence as possible,” said Levesque, a former chief of staff to ex-U.S. Rep. Charles Bass, R-N.H.

Kevin Landrigan is the State House bureau chief for the New Hampshire Union Leader and Sunday News. Reach him at klandrigan@unionleader.com.