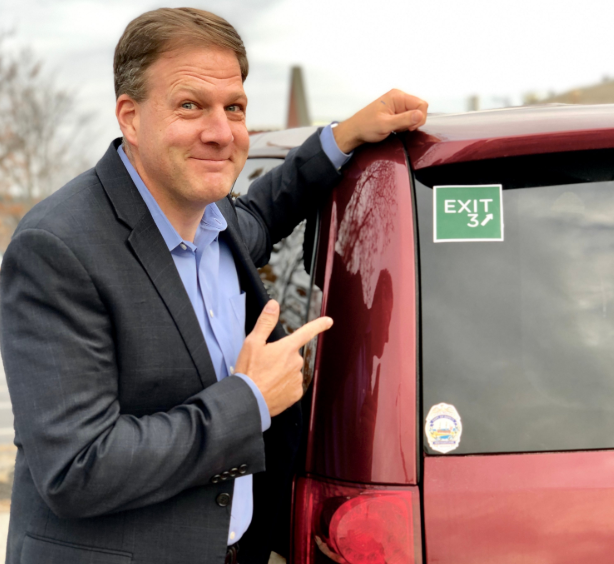 Gov. Chris Sununu gestured to a car sticker that identifies him as someone who grew up in Salem off Exit 3 on Interstate 93. The two-term Republican has come out against the federal mandate that New Hampshire renumber all its highway exits to reflect mileage markers on those roads. 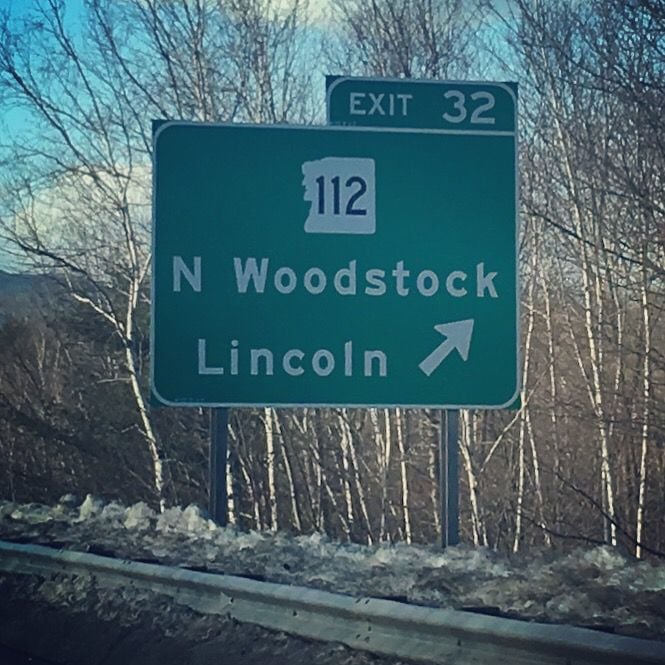 Exit 32 is known by townies and tourists alike for being the exit to Lincoln and Loon Mountain. 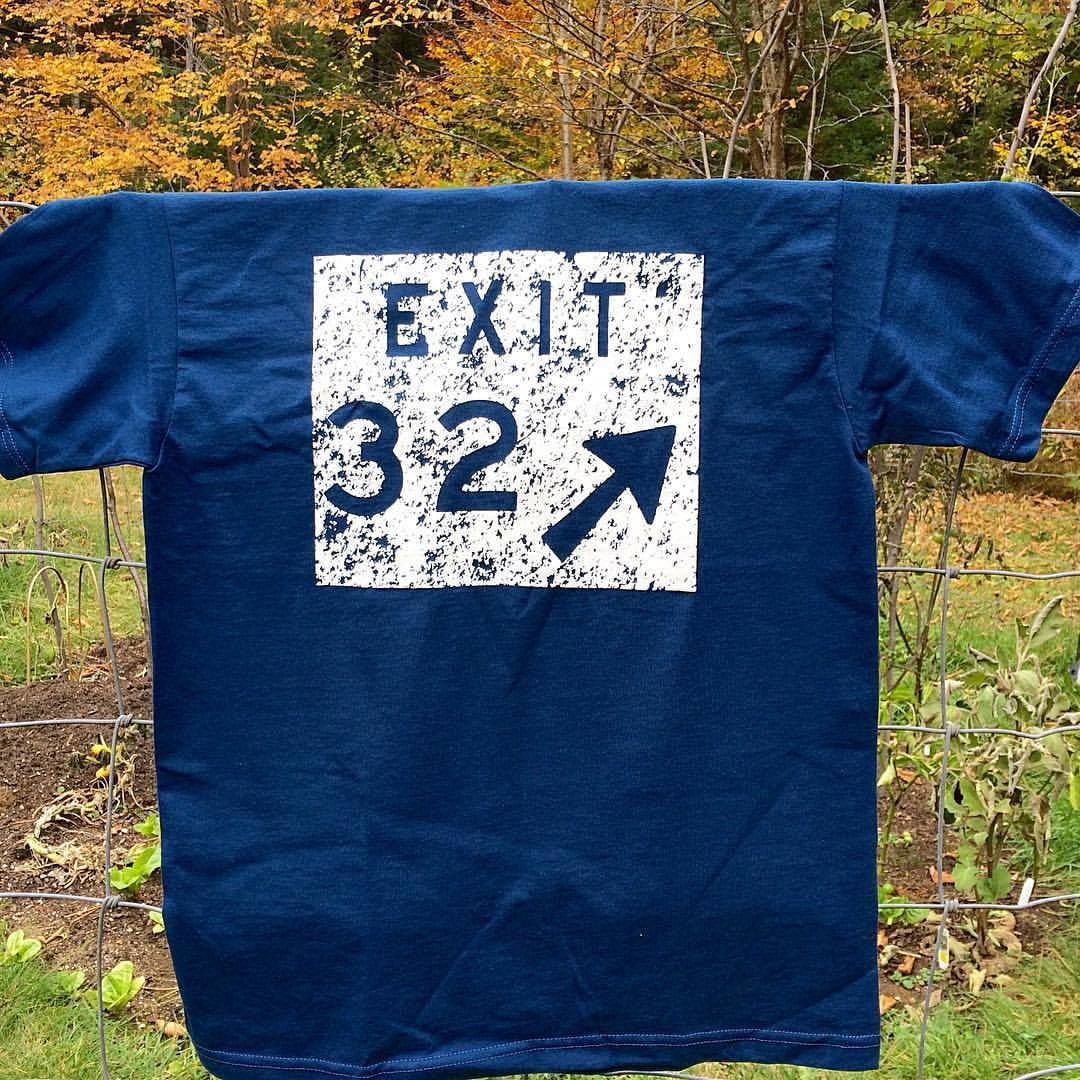 One of the products made by Exit 32 Apparel is a distressed T-shirt with its signature exit logo. 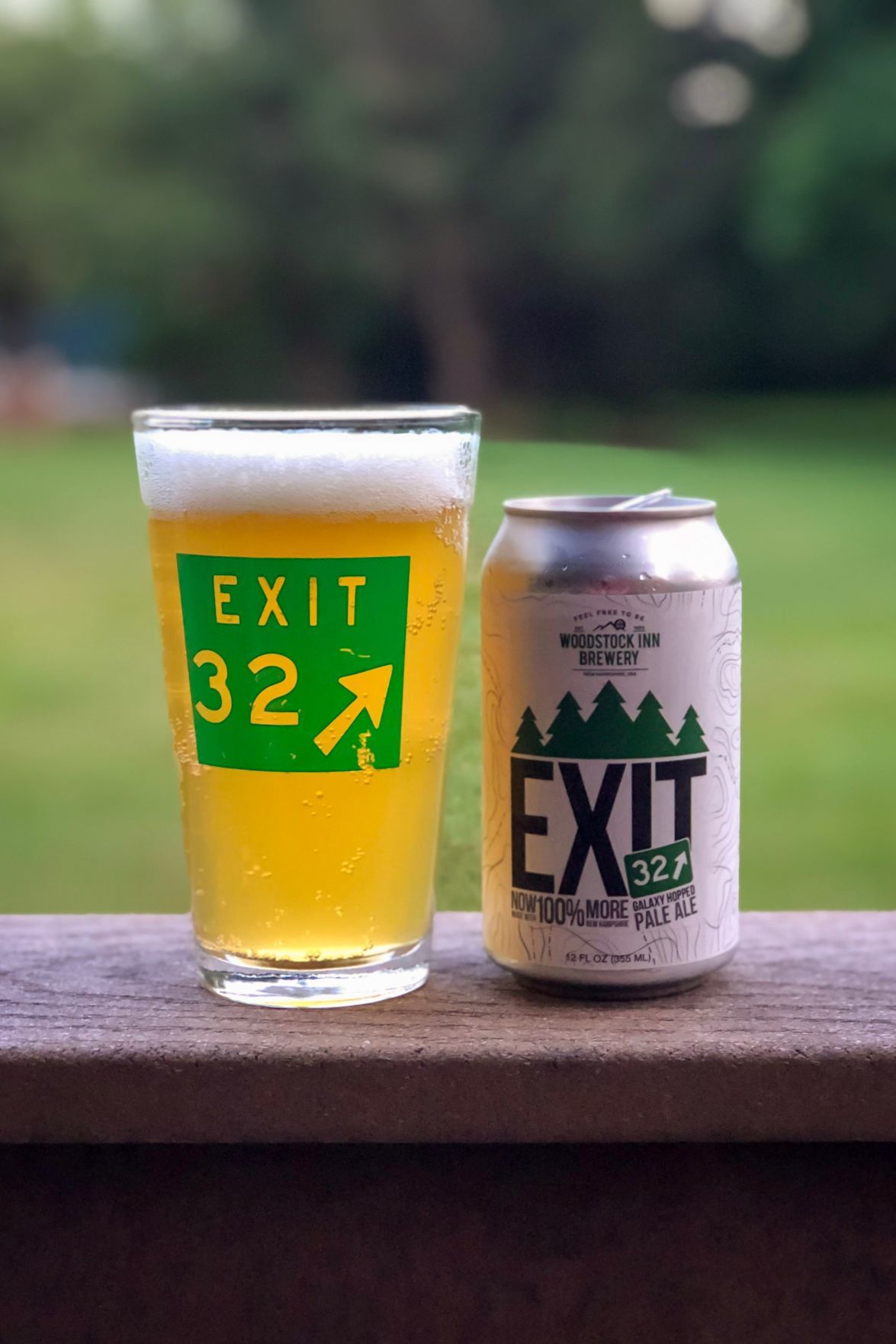 Exit 32 Apparel teamed up with Woodstock Inn and Brewery to brew a Galaxy-hopped, fruity pale ale.

CONCORD — New Hampshire may go it alone, but Gov. Chris Sununu said it should refuse a federal mandate that the state change the numbers on all its highway exits.

The Federal Highway Administration has approved a new regulation compelling states to have their exits correspond to the mileage marker at each location.

Presently the exits in New Hampshire are numbered sequentially from south to north or from east to west, depending on the configuration of the road.

Last week the state Department of Transportation said it was compiling information about the scheduling and cost for such a proposal and would submit it to the Governor’s Advisory Commission on Intermodal Transportation (GACIT).

The initial estimate was this change could cost about $1 million and be contained in the next 10-year highway plan lawmakers will take up in 2020, officials said.

But last Wednesday, Sununu, a two-term Republican, said he’s dead-set against the idea.

“I don’t know about you, but I love the fact that I grew up as an Exit 3 kid in Salem. Exit numbers are a point of pride for some of us in NH, and we shouldn’t let Washington bureaucrats threaten to take that away! #MyNH,” Sununu tweeted.

Sununu also said the state remains a donor state, getting much less in federal grants than its residents pay in federal gasoline taxes.

“The Granite State receives the lowest level of federal highway funding of ANY state. We won’t let misguided and wasteful Washington policies force us into changing our state’s iconic exit numbers,” Sununu said.

Federal officials have told states that fail to complete the conversion by 2022 that they risk losing federal highway money.

Massachusetts, Delaware and New Hampshire are the only states that have not yet begun the process of changing their exits. Last week, the Massachusetts DOT Board of Directors approved a plan for the change to take place over a two-year period.

The GACIT panel, made up of the Executive Council and Transportation Commissioner Victoria Sheehan, must give its recommendations on the 10-year highway plan to Sununu by the end of the year.

Sununu has until the middle of February to make changes to the plan and submit them to the Legislature for its debate. The governor also has the political clout of threatening to veto a 10-year plan that contains the renumbering change.

U.S. Rep. Chris Pappas, D-NH, a member of the House Committee on Transportation and Infrastructure, said Sununu is right.

“Changing exit numbers is unnecessarily burdensome to travelers and businesses,” said Pappas who said he’s lived right off Exit 9S on I-93 his entire life.

“I supported shelving this renumbering plan as an executive councilor, and I still don’t think it’s a good use of our state’s limited transportation resources. Let’s focus on how we can continue to modernize infrastructure to support economic growth, public safety, and our quality of life. I look forward to working with members of the House and Senate of both parties to get an infrastructure bill passed.”

The topic was a popular one on social media as New Hampshire residents debated whether it was a good idea.

She said she opposes the change because the Western White Mountain Chamber of Commerce has been marketing “Exit 32” as a retail and hospitality hub for those who take the Interstate 93 exit, which goes to Loon Mountain.

This would require changing it to Exit 100.

“This change would confuse the heck out of people who have lived their lives in this state, and it would hurt our tourist brand,’ McCarthy-Smee posted. “Tourism is everything up here.”

Jack Pollner and Andrew Rebeiro have run Exit 32 Apparel since 2009, selling T-shirts and stickers with the exit sign. The green and white stickers are a best seller.

“We’ve gone through 10,000 of those since 2009,” Pollner said. “I’ve seen them personally as far south as the New Jersey and Pennsylvania areas. We get pictures sent to us from all around the world.”

Pollner said he isn’t too worried if the exit change comes to fruition.

“Years ago this would’ve been great. But in the day of GPS and cellphone apps that tell you distance, it’s quite unnecessary,” Maldera posted on Facebook. “Federal government way behind on times as usual.”

Robert Janousek said the controversy is much ado about nothing.

Matthew Mayberry said he is excited to start talking to voters when he launches his campaign in the new year.

MEREDITH — In an upset, a longtime Republican Party leader lost his seat on the Republican National Committee on Saturday.