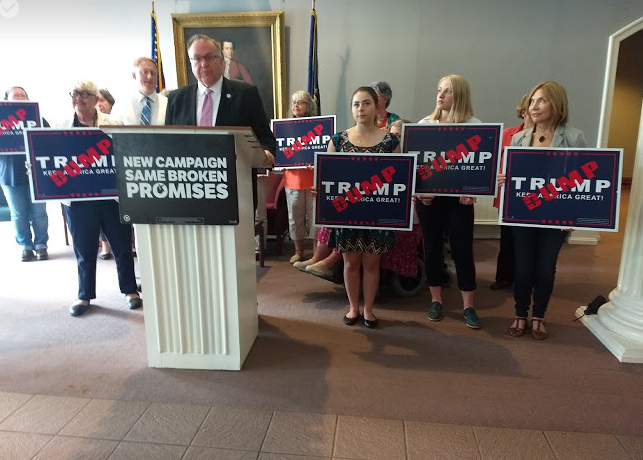 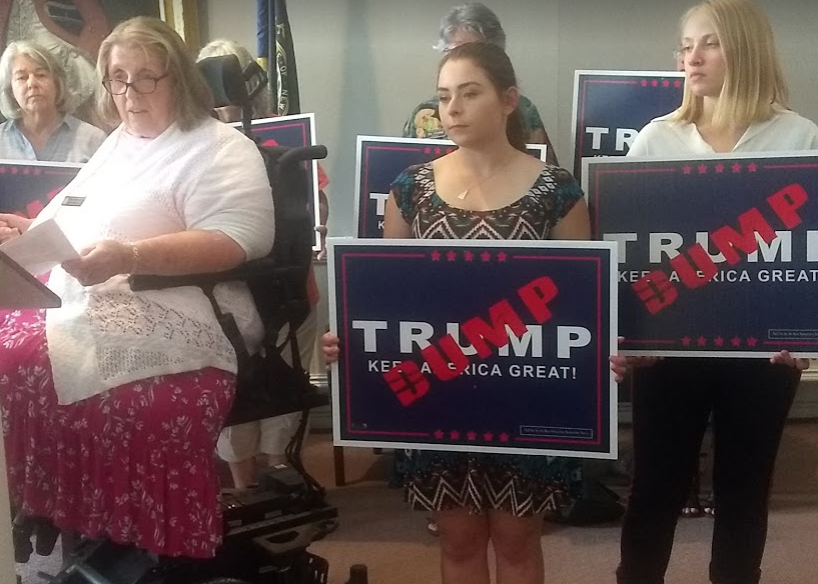 State Rep. Diane Langley, D-Manchester, speaks at a Democratic event critical of President Trump who plans to speak to a large rally of supporters at the SNHU Arena in Manchester Thursday night (Kevin Landrigan Photo)

State Rep. Diane Langley, D-Manchester, speaks at a Democratic event critical of President Trump who plans to speak to a large rally of supporters at the SNHU Arena in Manchester Thursday night (Kevin Landrigan Photo)

MANCHESTER — As President Trump’s much-anticipated return to New Hampshire nears, state Democratic leaders accused him Tuesday of breaking key promises on improving health insurance while liberal activists tried to put pressure on sponsors of the SNHU Arena where he is to speak.

“Trump came to this community — to Concord, New Hampshire — during his last campaign for President and made a promise. He said his plan would provide ‘much less expensive, much better health care.’ But as President, Trump immediately broke his promises, and began a consistent assault on our health care system,” Buckley said at a news conference in the Legislative Office Building.

“He failed to deliver better, more affordable health care as he promised and instead made things worse. Trump’s policies are giving insurance companies and drug manufacturers sky-high profits but at the expense of the rest of us. He’s tried to repeal the Affordable Care Act which would kick thousands of Granite Staters off their health care. He’s broken promise after promise and next year, we have a chance to say enough is enough by electing a Democrat to the White House.”

A spokesman for the Republican National Committee said Democrats wish they had as many NH accomplishments as Trump has.

"From the creation of nearly 20,000 New Hampshire jobs, to lowering prescription drug costs and securing our nation’s borders, President Trump has delivered on his promises for the Granite State. To claim otherwise is clearly just blowing hot air,” said RNC Spokesperson Nina McLaughlin.

Trump sent out an email to supporters mocking his Democratic rivals and their relentless attacks against him.

“Crazy Bernie, Sleepy Joe, and the rest of the 2020 Democrats are so out of touch with the American people that they’ve now fully aligned their views with the RADICAL SOCIALIST SQUAD, a group that truly doesn’t want America to succeed,” Trump wrote to his followers.

“The Democrats’ constant personal attacks, vicious lies, and hateful commentary about our great country have never had anything to do with me ... their goal has always been to silence YOU. The idea of you running our country TERRIFIES them.”

Trump called President Obama’s ACA a “disaster” that has caused many Americans to lose their primary care physician and forced them to buy more expensive, bureaucratic coverage.

After the 2016 election, he did convince the GOP Congress at the time to repeal the individual mandate that all Americans had to have insurance or pay a tax penalty every year.

Buckley was surrounded by party volunteers holding “Dump Trump” signs. Rep. Diane Langley, D-Manchester, spoke about constituents with pre-existing conditions who are paying more out of pocket for health care since Trump’s election.

“We can’t stop him from coming, but we can let the SNHU Arena know that New Hampshire people do not want Trump’s message of racism and violence in our communities,” Fogarty wrote on Facebook. “Call the SNHU Arena and any of their sponsors.”’

As of late Tuesday afternoon there were only three responses to Fogarty’s post on Facebook, including one from a reporter seeking an interview.

Jason Perry of the SNHU Arena said his office has received a “limited number” of calls, and added, “Being located in New Hampshire, the first-in-the-nation primary state, we expect this, as in the past we have hosted President Bush, then-Senator Obama, Secretary of State Clinton, among others.”

Manchester Mayor Joyce Craig said residents in the state treasure the First Amendment and spelled out what she hoped Trump would talk about.

“I hope that the President will focus on areas that we can work together on rather than on issues that further divide us. There’s many challenges we face that the President can assist with — combating the opioid epidemic, more federal funding for road and transportation projects, increasing federal support for more affordable housing options, and stronger support for our public schools,” said Craig, who is seeking a second two-year term this fall.

“Our city and our country are stronger when we work together. While in Manchester, I hope that the President takes the opportunity to demonstrate how he can be a collaborative partner and work with us to address challenges we all face instead of focusing on issues that continue to divide us,” Craig added.

As many as 11,500 are expected to be in the arena for the 7 p.m. rally Thursday, which will be Trump’s second visit to the state since the 2016 campaign.

Trump came to Manchester in March 2018 and advocated for the federal death penalty for drug dealers who cause customers to overdose and die.

During Trump’s term in office, New Hampshire has received a dramatic increase in federal grants to fight the opioid epidemic — in part the result of strong lobbying by the state’s all-Democratic congressional delegation. New Hampshire has one of the highest overdose death tolls per capita.

In 2016, Trump cruised to an overwhelming rout in the first-in-the-nation primary here, which put him on the path to wrapping up the GOP nomination against a crowded, talented field of 16 candidates.

Buckley said Trump needs to win here to get a second term.

“Later this week, President Trump will be holding a rally in Manchester because he knows that his path to 270 runs right through the middle of our great state,” Buckley said.

“We know exactly what he’ll do — lie and confuse and say anything he can to try to distract from his own record of broken promises.”

Democratic candidate Joe Biden’s campaign announced plans for a counter-protest rally down the street from Trump’s rally at the Portland Pie Co.; other protests are also in the works.

Downtown streets will be closed for hours to accommodate Trump visit

City streets close to the SNHU Arena will be closed and parking banned beginning at 2 p.m. Thursday to accommodate the Trump rally, Manchester officials announced.

The President has not campaigned in New Hampshire since 2016.

Biden forces plan to protest at Trump rally in Manchester

Outside SNHU arena: Why some waited all night to see Trump

MANCHESTER — Ba Nguyen, 83, planned to spend Wednesday night in a sleeping bag outside the Southern New Hampshire University arena, to be amon…

CROYDON — Police Chief Richard Lee said he was forced to hand over his gun, belt, uniform and cruiser keys at Town Hall on Tuesday after the board of selectmen voted to dissolve the town’s one-man police department.“I was told that I had to turn over the keys to the cruiser and my uniform im…

Charter school supporters dominated a public hearing Tuesday, asking for legislative approval of a federal grant to expand them across the state.