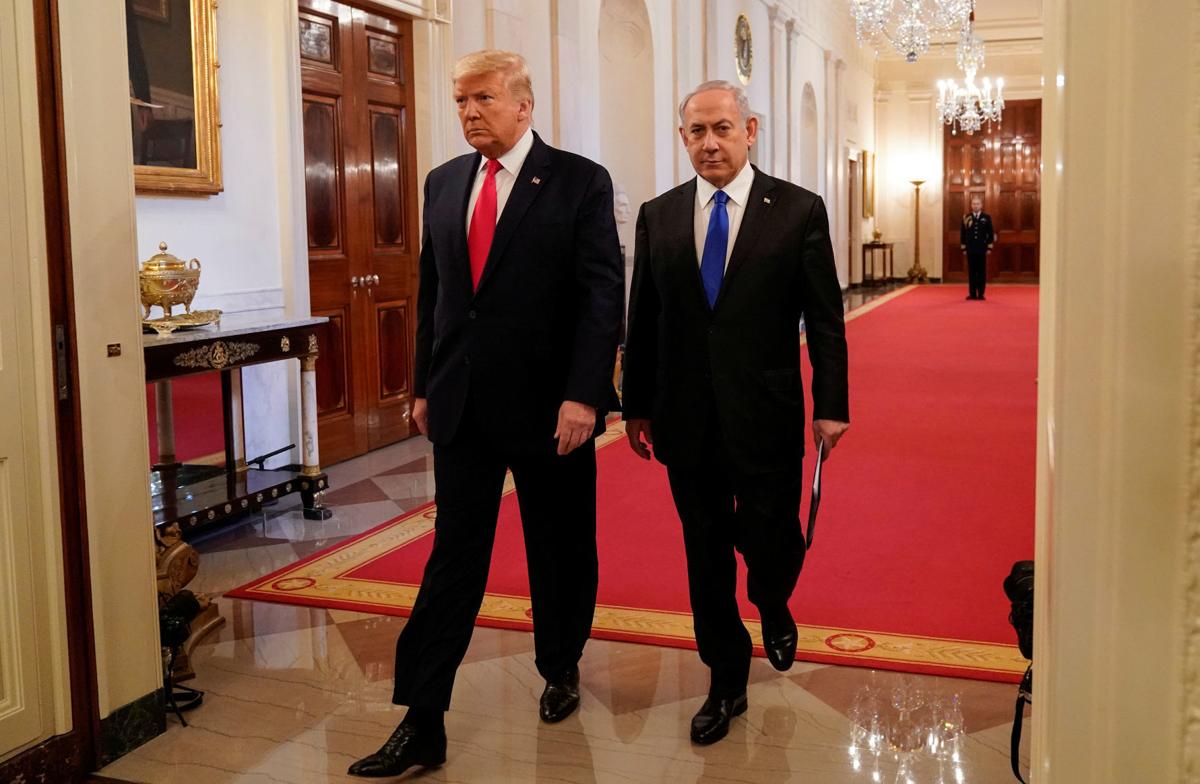 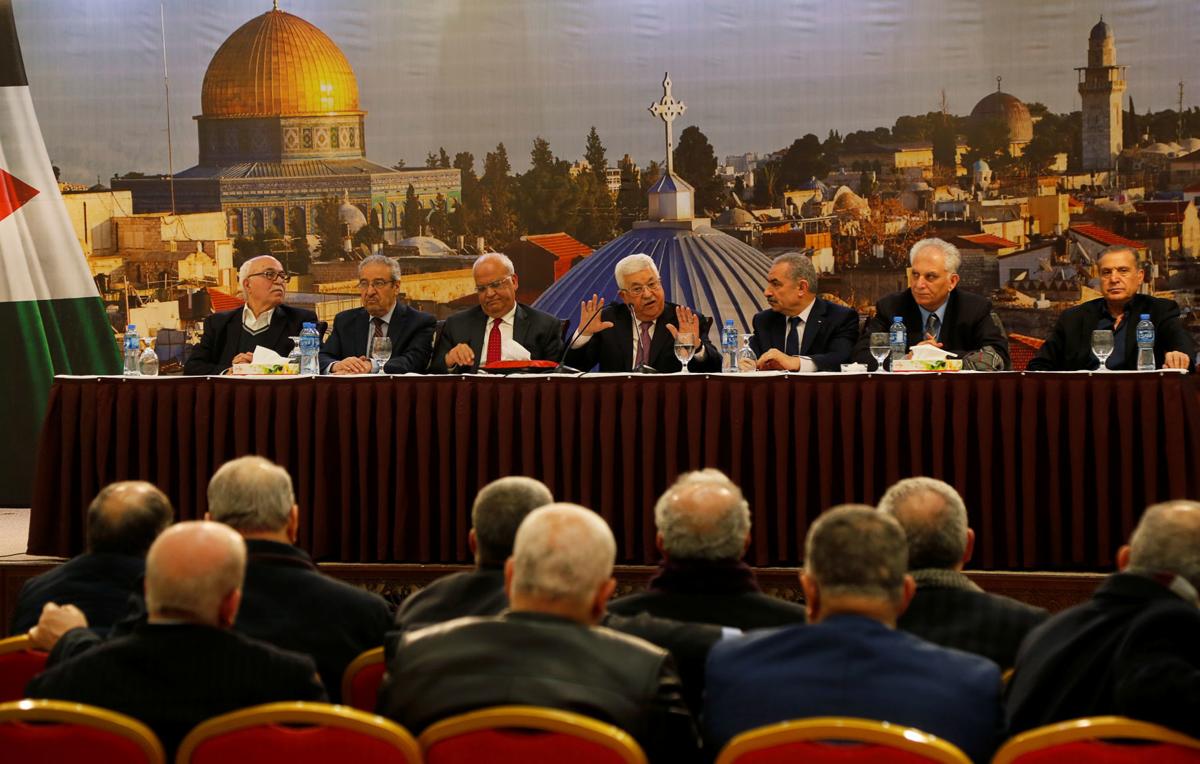 Palestinian President Mahmoud Abbas gestures as he delivers a speech following the announcement by President Donald Trump of the Mideast peace plan in Ramallah in the Israeli-occupied West Bank on Tuesday.

Palestinian President Mahmoud Abbas gestures as he delivers a speech following the announcement by President Donald Trump of the Mideast peace plan in Ramallah in the Israeli-occupied West Bank on Tuesday.

President Donald Trump on Tuesday announced the release of his long-awaited plan for peace between Israel and the Palestinians, calling it a good deal for both sides while making clear it would be more generous toward Israel than past proposals.

“I was not elected to do small things or shy away from big problems,” Trump said, standing alongside Israeli Prime Minister Benjamin Netanyahu at the White House. He added: “It’s been a long and very arduous process to arrive at this moment.”

The White House proposal is nearly three years in the making. Once a signature priority for Trump, the effort was hobbled early on by a Palestinian boycott and then repeatedly delayed by a political crisis roiling Israel.

The Trump plan would be a basis for negotiations if Israel and the Palestinians agreed, but hopes for that are low. Palestinian leaders rejected the plan before its release.

The package of U.S. ideas calls for a remapping of the West Bank and Jerusalem while offering Palestinians a pathway to statehood if they meet a set of tests.

“We are asking the Palestinians to meet the challenge of peaceful coexistence,” Trump said.

No Palestinians attended the White House preview of what Trump touted as a highly detailed proposal for resolving the Israeli-Palestinian conflict, which dates from Israel’s founding in 1948.

Palestinian Authority President Mahmoud Abbas was convening a special meeting Tuesday of the Palestine Liberation Organization. He was expected to call for wide condemnation of the proposals from Arab governments that have traditionally supported the Palestinian cause.

U.S. officials hope Arab leaders who are weary of the endless conflict will see the plan as perhaps the last, best chance to settle it before Israeli settlements, other construction and security measures on occupied territory render a self-governing Palestinian entity moot.

After holding back the secretive package during two rounds of inconclusive elections in Israel, the Trump administration decided to publish it ahead of a third vote in March and let the chips fall where they may, several people familiar with the process said.

Hours before the release in Washington, Netanyahu’s indictment on corruption charges was filed in a Jerusalem court. The release also comes amid Trump’s ongoing Senate trial on impeachment charges.

The package is expected to propose a redrawn border between Israel and the West Bank that would formalize Israeli control over large Jewish settlements. It would give U.S. blessing to some forms of Israeli security control over the territory Israel seized in 1967 and has occupied since, according to two people familiar with the plan who spoke on the condition of anonymity before the plan’s release.

The 80-page plan developed by Trump adviser and son-in-law Jared Kushner was expected to include proposals addressing each of the major issues that have scuttled past peace efforts, including competing land claims and the administration of holy sites in Jerusalem.

Full details of the proposal are expected to be released later Tuesday.

Gantz met with Trump separately at the White House as part of the administration’s strategy to release the U.S. guidelines for a settlement before Israelis vote in March. Netanyahu and Gantz are in a dead heat after two inconclusive elections in the past year. Both have said they welcome the Trump plan.

The package is expected to offer limited autonomy to Palestinians in the West Bank and East Jerusalem that would increase over about three years if Palestinian leadership undertook were to take new political measures, renounce violence and make other steps in negotiating with Israel, said two people familiar with the plan.

Some in Israel, along with U.S. critics of the Trump approach, think the plan could give a green light to Israeli annexation of land the Palestinians claim for a future state. Trump waved off questions about annexation Monday, but the possibility hangs over the plan’s release. The thinking goes that if Palestinians refuse to negotiate with Israel toward conditional statehood, Israel would have a free hand to annex land.

The anticipated plan has served to bring together disparate hostile factions. Hamas, the militant group governing the Gaza Strip, agreed to sit down Tuesday to craft a joint response with its archrival, Abbas, the Palestinian Authority president whose Fatah party controls the West Bank.

“The unitary scene is the first nail in the coffin of this deal; when we are united, Trump and no one else will dare violate our rights,” Khalil al-Hayya, the deputy head of Hamas, said at a rally Monday night in Gaza City. “We tell everyone that we are united against the deal of the century and to drop all conspiracies. We are one people under one flag.”

With Palestinian militants calling for residents of both the West Bank and neighboring Jordan to take to the streets for “days of rage,” the Israel Defense Forces dispatched a brigade of infantry troops the Jordan Valley. There were reports of minor clashes Tuesday between soldiers and protesters.

The United States cannot effect the proposals, but U.S. ideas for what a settlement should include have guided the most recent failed efforts at a negotiated settlement.

Leaked details of the plan have already caused political eruptions even among Israelis. After traveling to Washington with Netanyahu to press their case, leaders of Israel’s settlement movement reacted with dismay.

The leaders of several settler groups, who have been calling for a rapid annexation of the West Bank, instead declared that they could not support any plan that leads to Palestinian sovereignty over up to 70% of the contested territories.

“I am amazed that my prime minister has agreed to the creation of a Palestinian state,” David Elhayani, head of the Yesha Council, a body of settlement leaders, told the Jerusalem Post after the meeting with Netanyahu. “This is an existential threat to the State of Israel. It spells the destruction of the settlements in Judea and Samaria. We have agreed in the Deal of the Century to the creation of a Palestinian state.”

Others in Israel are concerned about a Palestinian uprising in the wake of the plan’s release. A violent backlash is one of the factors that Washington has weighed in deciding when and how to go forward after Palestinians rebuffed all U.S. outreach months after the effort began during Trump’s first year in office.

The Islamic Action Front, the Muslim Brotherhood’s political arm in Jordan, and several activist groups called for a “mass protest” at the U.S. Embassy in Amman on Tuesday timed to noon Eastern to “coincide with Trump’s speech on the Deal of the Century,” vowing that the deal “will not pass.”

Additional Jordanian anti-riot police were deployed at the embassy as of Tuesday afternoon.

Islamists and independents also called for further protests at the heavily guarded embassy this week after Friday prayers.

A second group of youth activists known as the “harak” directed its anger at the Jordanian government due to its close relationship to Washington. They called for protests at the prime minister’s office Thursday evening to “reject the deal of the century” and repudiate Jordanian government policy that they said weakens people’s ability to confront the plan.

Jordan’s Senate, a body of influential former ministers, prime ministers, ambassadors and royal court officials all appointed by the king, announced that it would hold an emergency closed session on Wednesday to discuss the ramifications of the Trump peace plan.

“If you look at the discourse on the streets, people are not really talking about this plan at all,” he said. “What happens now is really a big test for Abbas because it will show how much support he has among his people, but I don’t believe that there is the energy among the Palestinian public to go out in mass protest.”

“I think Abbas is trying to see how much he can mobilize his supporters and get the young guard from Fatah out on the streets to protest this plan, but he does not want to create a fully blown third intifada [uprising]. He just wants to send warning signals,” said Milshtein. “But sometimes these messages can be misunderstood, and all it takes is just one or two violent incidents for an escalation.”

Milshtein, a retired officer in the Coordinator of Government Activities in the Territories (COGAT) unit, the Israeli military body responsible for civil coordination with the Palestinians, said that at this point, security coordination on all levels between Israelis and Palestinians appears to be continuing as usual.

While some in the settlement movement pledged not to support the plan’s conditional path to a Palestinian state, other Israeli hard-liners said they could back the idea if it carries, as reported, hard preconditions along the way.

Those requirements are said to include working to disarm Hamas, the Palestinian militant group that runs the Gaza Strip, trying to stop regular rocket attacks from Gaza, ending financial support for Palestinians arrested after attacking Israelis and recognizing Israel as a legal Jewish state.

Eugene Kontorovich, a legal analyst the Koholet Policy Forum, a leading right-wing think tank in Jerusalem, noted that unlike previous peace plans, Trump’s would rescind the offer of statehood if the Palestinians don’t take the steps.

“If these conditions are truly unrealistic, then is there really anything to talk about?” Kontorovich asked. “This is a plan that could show that a peaceful Palestinian state is nothing anyone should take seriously.”

Otherwise, “they could have a state right now,” he said. “Look, they have a right-wing American administration talking about a Palestinian state.”

State police will provide police services to the town.

His planned visit to the school was canceled last week amid purported threats.

CONCORD — A legislative rules panel approved changes needed to ensure that school districts across the state are eligible for Medicaid reimbursement.