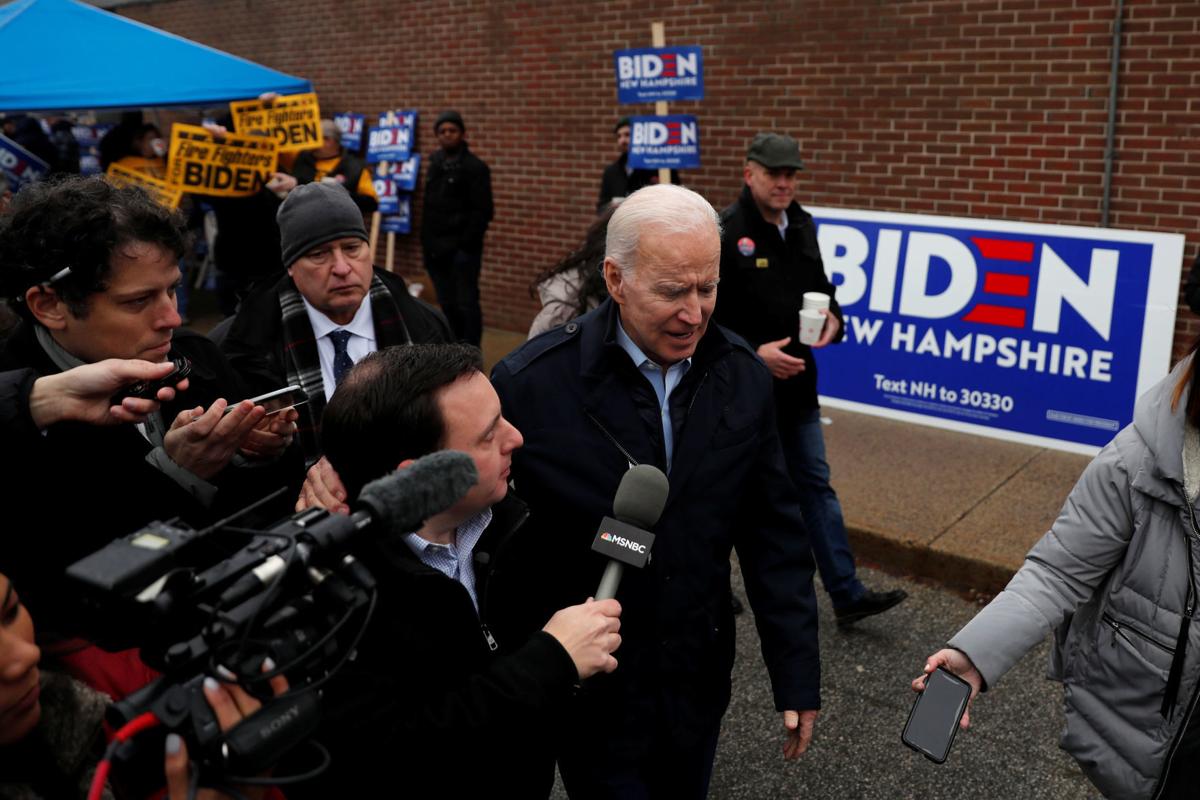 Former Vice President Joe Biden talks to the media as he leaves a polling station on primary day in Manchester.

If Biden goes on to win the nomination, he will do something no one has done in modern history — become his party’s standard-bearer after finishing a distant fifth in the Granite State.

Some primary defenders here admit concern this could raise the chorus of voices for more racially and ethnically diverse states to move ahead of New Hampshire on the primary calendar.

“This is really going to be tough going forward,” said state Sen. Jeb Bradley, R-Wolfeboro, a former member of Congress.

“The problem New Hampshire has now is it doesn’t represent the modern Democratic party nationally. It’s too old, too white and not urban enough.”

The Iowa caucus debacle doesn’t help advocates here make the case for not tinkering with the 2024 schedule.

“I don’t know how Iowa hangs on,” Bradley said.

“I never thought I would say this, but I think we may need to consider pairing with another state or two on the same day to make for a Super Opening Day,” he said. “I certainly hope not, but we may need to get creative to save our status of going first.”

Many senior Democrats are less worried. They believe a close analysis of what happened here confirms New Hampshire’s important role in the process.

“Joe Biden would not be the first nominee to get whacked in New Hampshire. Remember George W. Bush, whom John McCain buried here in 2000, and then like Biden, recovered in South Carolina and went on to victory,” said one veteran primary defender who declined to be identified.

What raises the threat level for New Hampshire is the loss of the best primary defenders both parties have had for decades.

Last week, Democratic National Committeewoman Kathy Sullivan announced that after 12 years she is not seeking another term.

That will end a 22-year run of leadership that included a decade as state party chairman.

“There’s no question that’s a lot of institutional knowledge and political connections going out the door,” said Greg Moore, a past GOP operative and state director of Americans for Prosperity.

“It always looked like while they surely were different politically, they worked really well together on the state’s behalf.”

Democratic National Committee Chairman Tom Perez heightened the pressure on the first-in-the-nation primary camp by calling for a review of the primary calendar the morning after the New Hampshire results.

“This was the most overt statement, but it’s been clear for a long time that Tom Perez was no fan of New Hampshire’s influence,” Duprey said.

Perez is stepping down as chairman after the 2020 election, but Democrat Sullivan agreed the battle will be joined by party leaders who share his view.

For her part, Sullivan said she believed the four early states — New Hampshire, Iowa, Nevada and South Carolina — did their job of winnowing the massive field to the most serious contenders.

Sullivan pointed out that if Biden wins the nomination, New Hampshire will have been where Democrats across the country first saw that Bernie Sanders had problems growing his very liberal base.

“We really signaled that Bernie had a hard-core constituency but was not able to expand his coalition, and that was proven here early on,” Sullivan said.

“There was an opening for a candidate not from the most liberal wing of the party to win on Super Tuesday and at this point in time likely to win the nomination.”

“New Hampshire is one of the only places where a Pete Buttigieg or Amy Klobuchar could get enough attention and real face time with voters to have the breakthroughs that they did,” Duprey said.

Duprey said that after losing his seat, he stepped down right away so Ager, his replacement, could gain experience in advance of this summer’s nominating convention.

“Chris will do great, but it takes time to build those relationships,” Duprey said.

State Sen. Lou D’Allesandro, D-Manchester, was a prominent Biden backer who has fielded calls about this issue from national media outlets.

“I think it’s silly to suggest because Biden didn’t do well here, then if he’s the nominee there’s something wrong with New Hampshire’s primary,” D’Allesandro said.

“Vice President Biden didn’t do well here because the campaign wasn’t well run. Look at how critical Jim Clyburn was about the Biden campaign even after he won big in South Carolina.”

U.S. Rep. Clyburn’s endorsement of Biden in South Carolina has been called key to his victory there.

D’Allesandro agreed that along with the candidates, national media commentary matters.

“They have always been our allies,” D’Allesandro said.

Since Tuesday, some media analysts have joined in to question whether it’s time to shake things up.

“The first two contests being almost entirely white hasn’t mattered as much in past years, but it really mattered this year,” tweeted Jim Geraghty with the National Review last week.

“It’s mind-boggling that the Democrats ever agreed to a schedule where the first heavily African American state goes fourth.”

Duprey said this emphasis on the lack of minority residents here is “insulting” to the electorate.

“The notion is that everyone votes only for their own demographic. How then do you explain Barack Obama, an African American, winning New Hampshire twice and convincingly against very capable opponents like John McCain and Mitt Romney?” Duprey asked.

“We’ve proven time and time again that your race, your gender, your religion doesn’t disqualify you.”

New Hampshire does have politically prominent primary supporters who backed Biden and could encourage him to keep New Hampshire first.

There’s also nothing like a general election victory to make you forget the painful losses of the past.

“If Joe Biden wins the nomination and beats Donald Trump in New Hampshire, that would sure take a lot of the sting off what happened in the primary,” D’Allesandro said.

Joe Biden calls for unity after big wins in Michigan, three other states