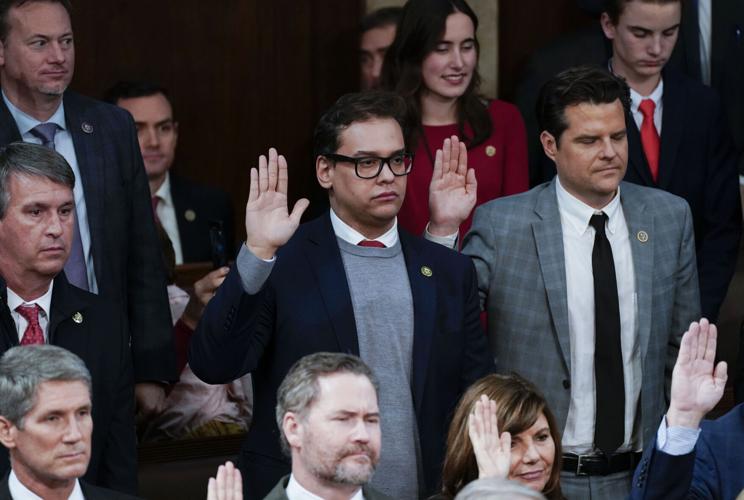 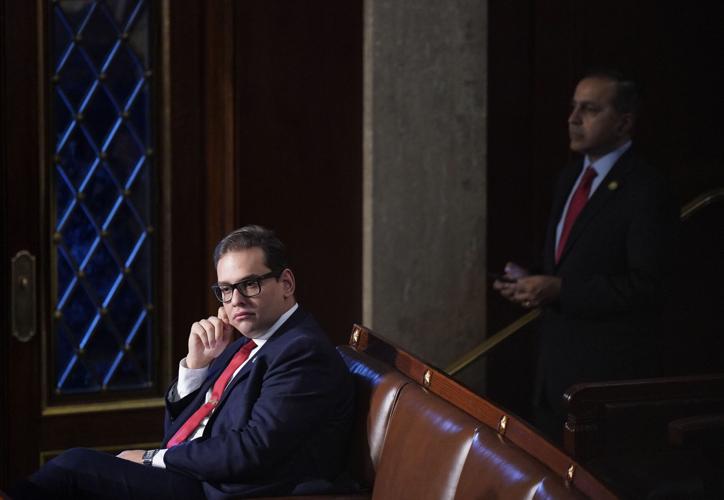 George Santos (R-N.Y.) watches floor proceedings as the search for speaker continued on Jan. 6 in Washington.

ALBERTSON, N.Y. - Sitting in the basement of an American Legion building, an American flag tucked in the corner and the sounds of a church rock band playing above, a group gathered for a local Republican club meeting to discuss one thing: Rep. George Santos.

"Every day that he's still there, we are suffering. I mean, he's become a joke on late-night talk shows, but to us, it's not funny because we deserve a real congressman," said North Hempstead Supervisor Jennifer DeSena, who endorsed Santos during his campaign but has since called on him to resign.

Santos's (R-N.Y.) constituents say they once saw him as a fresh face for the Republican Party, a promising candidate who could flip New York's 3rd Congressional District from Democratic control. During his campaign, Santos touted his success as a businessman and his lineage as a first-generation American with roots in Brazil. He promised to work to reduce inflation, combat crime and secure the U.S.'s southern border.

But Santos's tenure in Congress was thrown into disarray before it even started, when the New York Times reported he fabricated large parts of his résumé, including that he had an MBA from New York University and worked for Citigroup and Goldman Sachs - none of which is true.

What has followed has been a consistent drip of new details, seemingly every day, that have painted the picture of Santos as a serial fabulist, ranging from small embellishments to statements now subject to investigation by federal prosecutors in the Eastern District of New York. He has faced calls from his Republican colleagues in the House to step down, as well as from local Republican officials.

Santos has admitted to some embellishments about his past, but has said he won't resign his seat.

Caught in the middle of the drama are the 746,449 constituents in Santos's district, which spans parts of northeastern Queens to towns along the North Shore on Long Island. In interviews with The Washington Post over several days, residents who supported Santos said they both regretted their choice and were resigned to his status as a member of Congress.

But the prevailing sentiment, among both Republicans and Democrats, was raw anger and a sense of being cheated.

"George Santos deceived us. He deceived Republicans and he deceived Democrats," said Jody Kass Finkel, the co-founder of Concerned Citizens of NY-03, a nonpartisan group of residents calling for Santos to resign. "He's a liar. He's a cheater. And he's probably a criminal."

In Manhasset, a town that exemplifies the places where Santos won overwhelmingly, salons, clothing boutiques, and artisan bakeries and cafes line old brick storefronts. The town is located a handful of train stops from Manhattan, where many residents in this area work. On the outskirts of town sit spacious, multimillion dollar homes, country clubs and private schools.

Joe Biden won the district by nine percentage points in 2020. But in 2022, concerns over public safety, immigration and the economy propelled Santos into his seat over his Democratic opponent Robert Zimmerman, flipping the seat from Democrat to Republican control.

Despite Santos's indiscretions, several Nassau County voters admitted they thought it was better to have a Republican hold the seat than open it up to another election and risk losing it a Democrat.

Henry Golis, an Albertson resident who is involved with the Albertson/Roslyn Heights Republican Club, said he voted for Santos for his views on securing the southern border and boosting the economy. He said recent reports about Santos's fabrications were "shocking" but stopped short of calling for his resignation.

"The damage is already done. He already stated that he wasn't going to resign," Golis said. "He's going to see this play out. And now it is the responsibility of Congress where he is now, to do what they want with them."

Despite the calls for resignation and overall concerns, House Speaker Kevin McCarthy (R-Calif.) has not joined calls for Santos to step down and assigned him seats on two committees. McCarthy has a slim, four-vote majority in the House, and earlier this month, Santos voted to support him on all of the 15 ballots McCarthy needed to win the speaker's gavel

"I try to stick by the Constitution. The voters elected him to serve," McCarthy told reporters on Jan. 11. "If there is a concern, and he has to go through the Ethics (Committee), let him move through that."

Santos has said he will continue to serve in office, but maintaining that posture for two years of his term could be tenuous.

He is under investigation by federal prosecutors who are looking into his finances and whether he broke any laws while running for office. And Brazilian authorities have announced they are reviving a 2008 case that involved Santos and a stolen checkbook. Law enforcement officials initially suspended the case after they could not locate Santos but have said they will reinstate fraud charges against Santos and seek a "formal response" from the New York congressman.

"We're in this vulnerable position of being represented by a fraud and a con man, and that really means were not represented at all," said Kim Keiserman, 51, a registered Democrat and member of the Concerned Citizens of NY-03. "He's really a pariah on both sides of the aisle, so there's just no scenario under which he can be an effective legislator or, you know, a real voice for our district."

Several people who told The Post they voted for Santos said they regretted their decision, or expressed anger at Santos for fabricating parts of his personal and professional story.

"I'm completely outraged by the whole thing, that someone would lie on their résumé to that extent and then call it an embellishment. I think it's a complete outrage," said Anthony Raimondi, a 62-year-old resident from Manhasset.

Asked if he would vote for Santos again, Raimondi replied "Definitely not."

"These guys lie about anything, " he said. "It's sad to say this is what we as a party have become."

Some in the group asked LeBoutillier why Republicans in Congress had not immediately taken up a vote to remove Santos from office.

His answer was simple: "Kevin McCarthy so far has not been willing to throw him out."

After the meeting concluded, people lingered in the room, with some saying they now had a better understanding of the news reports about Santos and the intricacies of Congress. Others remained steadfast that the national political implications of removing Santos from office would do more harm than good.

"My heart says yes [Santos should be removed or resign], but my brain says [McCarthy] can't because they need the seat," said Howard Abbondondelo, an Albertson resident. "But I won't invite him over for Thanksgiving dinner, that's for sure."

DeSantis opens up early lead over Trump in UNH poll