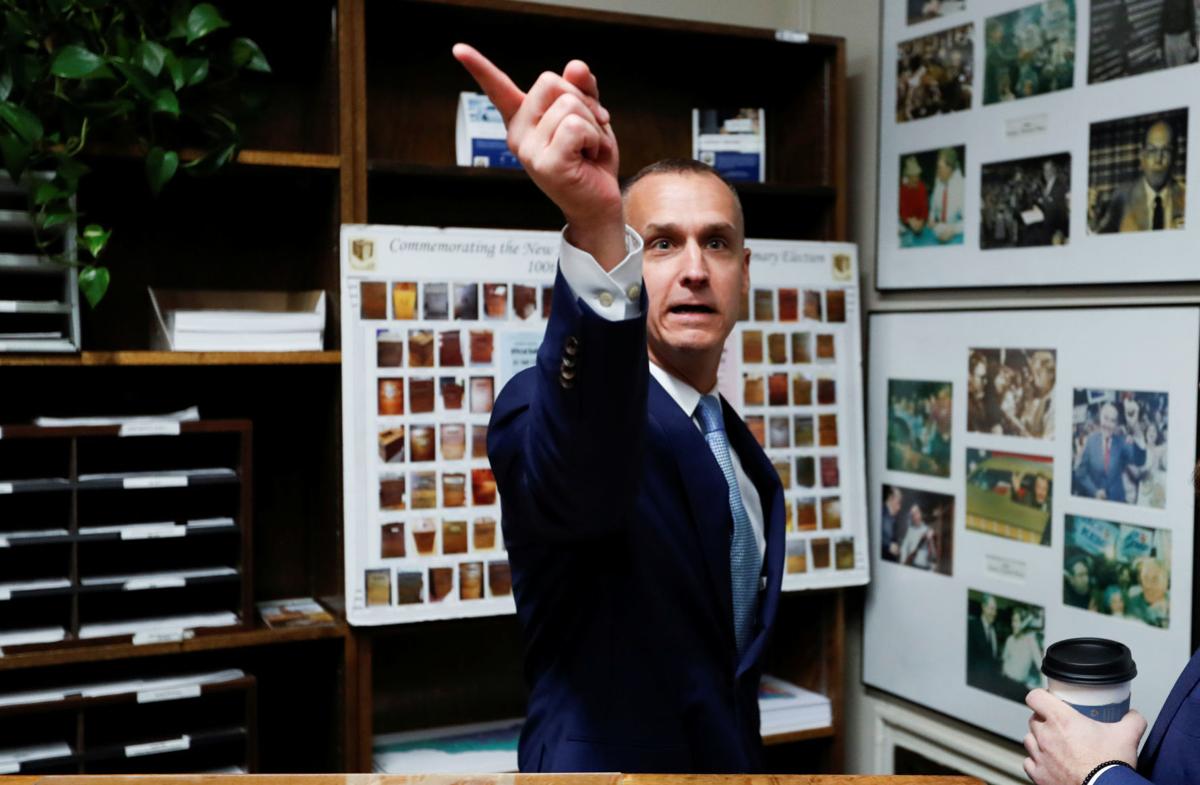 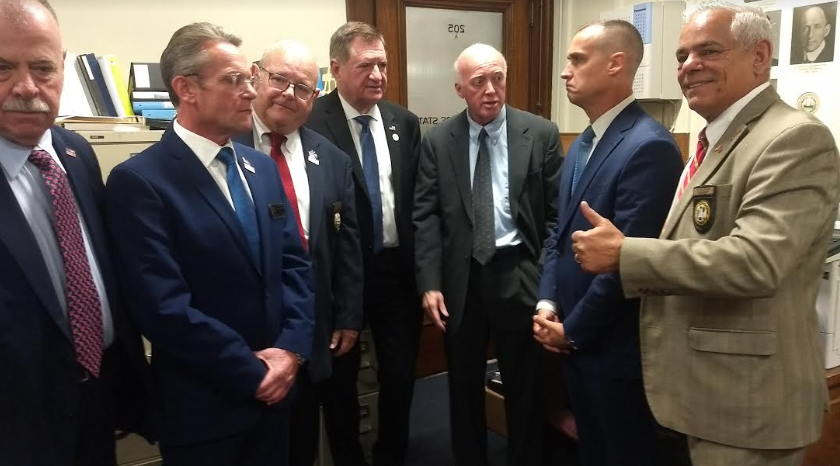 Corey Lewandowski, Donald Trump’s 2016 campaign manager, second from the right, meets with the inner circle of that group along with Secretary of State Bill Gardner, third from the right. The meeting was just before Vice President Mike Pence came with Trump’s filing papers for the 2020 primary.

Republican strategist Corey Lewandowski of Windham admitted he’d love to run for the U.S. Senate in New Hampshire but said a desire to shield his family from the rough-and-tumble on social media remains a concern.

A rally against the impeachment of Trump, led by Lewandowski, drew more than 100 supporters outside Shaheen's Manchester office.

“I love a fight. You know that and if I do decide to run it would be unlike any other race Jeanne Shaheen has ever faced before. I am tenacious. I do not back down,” Lewandowski told reporters Thursday while waiting for Vice President Mike Pence to arrive and turn in President Trump’s filing papers for New Hampshire’s presidential primary.

Trump’s 2016 national campaign manager said he would make a final decision by the end of the year.

“In fairness to the other candidates in the race, I don’t want the others to blame me if I don’t get in and they don’t have enough resources to be competitive,” said Lewandowski.

Lewandowski flew on Air Force One with Trump Nov. 4 on the way to an election eve rally in Kentucky.

He told New Hampshire associates Trump agreed with the assessment that Lewandowski would mount the strongest challenge to Shaheen’s bid for a third term.

Lewandowski said his 13-year-old daughter is active on social media and would be exposed to plenty of negative publicity about her father if he does run. He said his sons, 8 and 10, “aren’t as active in that arena.”

“I have to consider the impact this could have on my family. At the end of the day, being a U.S. senator would be a wonderful thing but it’s a lot more important for me to be the best dad I can be,” Lewandowski said.

“The President has a 13-year-old son, Baron, and he understands this. I spoke to the President about it.”

A Democratic Party spokesman said Lewandowski is a one-of-a-kind, but for all the wrong reasons.

“If he runs for the U.S. Senate, Corey Lewandowski will be unlike any candidate New Hampshire has ever seen: a corrupt shadow lobbyist selling White House access to the highest bidder and a self-admitted liar with a history of violence and assault,” said Josh Marcus-Blank. “But here’s the headline: that’s not going to help him get elected to the Senate.”

On Nov. 1, Lewandowski met privately with Gov. Chris Sununu. Both have said little about those private conversations. Lewandowski said that Pence’s visit to the State House last week and “the 2020 campaign” did come up.

Lewandowski said it was up to Sununu to decide if he wished to choose sides in the GOP Senate primary.

“If I get in the race I am the best chance to beat Jeanne Shaheen. A strong top of the ticket with Trump-Pence and a Corey Lewandowski running for Senate is going to help all the candidates, including the governor, the executive council, state senators, state representatives, all the way down the ballot,” Lewandowski said.

“It will be up to the governor to decide what role if any he would play in that primary.”

Last month, Lewandowski said on a radio talk show he would not run for the Senate if Trump needed him to help defend against impeachment.

On Thursday, Lewandowski said he could do both — serve as an informal adviser to Trump while mounting a Senate bid.

“I don’t know if they are mutually exclusive. I think there is an opportunity to be an advocate for the president that he didn't do anything wrong with regards to this impeachment process,” Lewandowski said.

Lewandowski said he’s been astounded at how the left wing of the Democratic Party has controlled the nominating process to date.

“Bill Clinton today could not win this nomination,” Lewandowski maintained.

“Look at Bernie Sanders and Elizabeth Warren. They can’t win a single state that Hillary Clinton lost in 2016. Show me their path to victory because it doesn’t exist,” Lewandowski said.

Former Vice President Joe Biden’s campaign is at a critical juncture, he said.

“Joe Biden is really in trouble; he’s burning through a lot of money, which is never a good thing,” Lewandowski added. “I don’t think Joe Biden has what it takes to win the primary. I don’t think he is going to get there.”

Granite Status: With Lewandowski out, what's next?

AFTER FIVE MONTHS of will-he-won’t he, the news that Corey Lewandowski will not run for Senate has created more clarity in the Republican primary.

WASHINGTON — Hillary Clinton criticized the campaign of her former Democratic presidential rival Bernie Sanders in a new documentary in which she says he was an ineffective U.S. senator who accomplished little because "nobody liked him."

MANCHESTER — Maura Sullivan, the Portsmouth Democrat who was the runner-up in the crowded 2018 Democratic primary in the 1st Congressional District, is backing the presidential campaign of Pete Buttigieg.

With candidates in Iowa and D.C., NH campaigns turn to volunteers to spread message

CONCORD — About 30 ardent supporters of Sen. Elizabeth Warren gathered in a low-ceilinged campaign office one evening last week to bone up on some of Warren’s policy proposals at a “night school.”