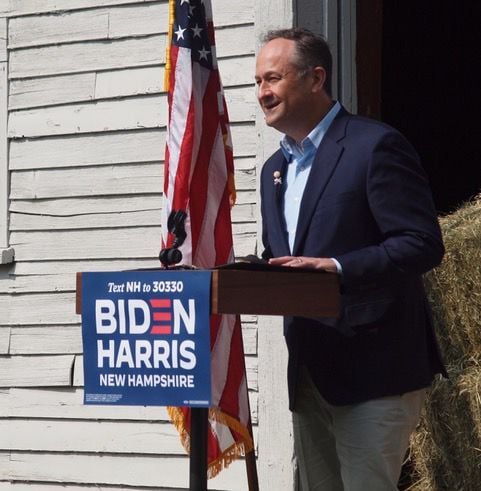 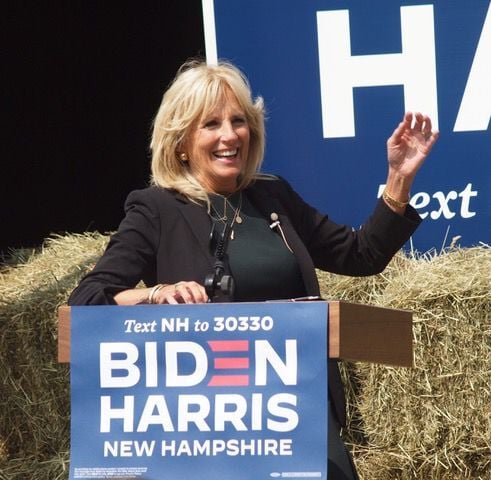 Jill Biden was back in New Hampshire Wednesday, seen here campaigning on behalf of her husband, former Vice President Joe Biden, in Bedford.

Jill Biden was back in New Hampshire Wednesday, seen here campaigning on behalf of her husband, former Vice President Joe Biden, in Bedford.

Jill Biden and U.S. Sen. Kamala Harris’ husband visited New Hampshire on Wednesday to stump for their significant others, meeting with local residents and attempting to stir up momentum for the Democratic party.

“Hello, New Hampshire. We are back,” said Biden, the wife of former Vice President Joe Biden, at an outside event at a home in Bedford.

“The ACA is just a starting point — a foundation on which we can build,” Biden said.

She said that even with almost 200,000 Americans lives lost during the global pandemic, still more people with new and pre-existing conditions have to be considered when imagining what health care will look like in the future.

She said there has never been a more important time to defend the progress made through the ACA so that millions of Americans can rely on staying covered, even if they lose their jobs or have pre-existing conditions.

If elected, Biden said, her husband will build and create a public health insurance option similar to Medicare that gives every American access to high-quality coverage.

“It won’t be easy to do, but neither was the ACA,” she said.

Emhoff stayed on that theme, saying the Democratic candidates for president and vice president know these discussions cannot be delayed.

He said that while the Trump administration is in court trying to dismantle the ACA in the middle of a pandemic, Joe Biden and Harris will work to build on and improve the ACA by expanding health care coverage to low-income Americans, investing in rural health care facilities and lowering health care costs and runaway drug prices.

“To date, nearly 195,000 Americans have unnecessarily lost their lives due to the incompetence and extreme disregard by this administration. This was completely preventable. This virus has upended the lives of every single one of us” he said.

“COVID-19 has also revealed some of the striking disparities that are built into our health care system with Black and brown communities bearing the brunt,” Emhoff said.

The event was held in the backyard of Paul and Ann Remus’ farmhouse on Meetinghouse Road.

“We support Joe Biden and his run for president and want to do everything we can to support his campaign,” said Paul Remus of Bedford, who previously hosted Barack Obama at his residence and whose daughter is working on Biden’s campaign.

Biden and Emhoff discussed health care with locals before heading to Manchester, where they kicked off a procession of vehicles driven by volunteers distributing yard signs.

Later, the two stopped in Dover, where they met with veterans and military families.

Republican leaders in New Hampshire criticized the absence of the candidates themselves on Wednesday.

“We are 48 days out from the election and Joe Biden and Kamala Harris have still not stepped foot in the Granite State since their disastrous First-in-the-Nation primary campaigns,” state party Chairman Stephen Stepanek said in a statement.

“Visits from Jill Biden and Doug Emhoff aren’t going to cut it … As the NHGOP and Trump Victory operations continue to out-organize New Hampshire Democrats on the heels of President Trump’s visit to New Hampshire just weeks ago, President Trump and Republicans up and down the ballot are well-positioned for a Granite State victory this Nov. 3.”

Trump's lawyers, Manhattan prosecutors to square off in court over president's tax returns

NEW YORK (Reuters) - With the U.S. presidential election looming, lawyers for Donald Trump will ask a federal appeals court on Friday to block Manhattan's top prosecutor from obtaining the president's tax returns in connection with a criminal probe into Trump and his businesses.

Some U.S. stocks could face more volatility next week as President Donald Trump and rival Joe Biden face off in their first debate ahead of a November election that betting services currently view as almost a coin flip.

Putin says Russia and U.S. should agree not to meddle in each other's elections

MOSCOW - President Vladimir Putin called on Friday for an agreement between Russia and the United States to guarantee not to engage in cyber-meddling in each other's elections.

Facebook's Oversight Board plans to launch just before U.S. election

Facebook Inc's long-delayed independent Oversight Board plans to launch in mid-late October, just before the November U.S. presidential election, although a board member said he did not know whether it would hear cases related to the contest.