Sign Up
Log In
Purchase a Subscription
You are the owner of this article.
Edit Article Add New Article
You have permission to edit this article.
Edit
Home
News
Sports
Voices
NH Life
Opinion
Obituaries
Jobs
Autos
Homes
Classifieds
Announcements
Public Notices
Share This
SPONSORED BY
1 of 5 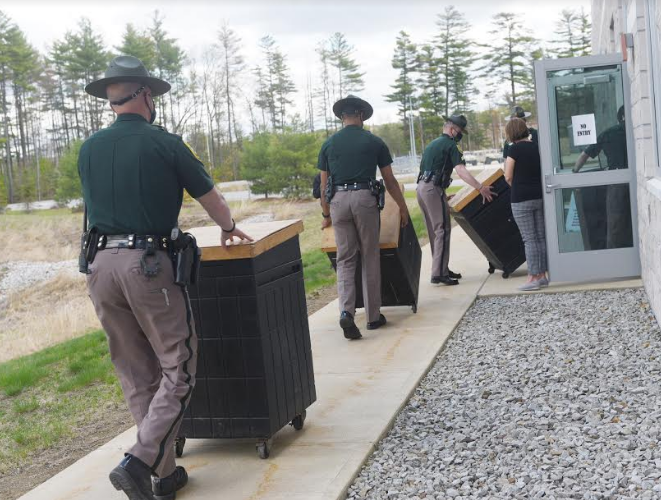 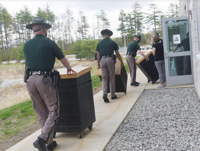 State troopers deliver vote-counting boxes that came from the town of Windham. Tuesday kicked off the first day of a forensic audit to try to determine what caused a discrepancy between the results on Election Night and a recount three weeks later of a state representative race in Windham. 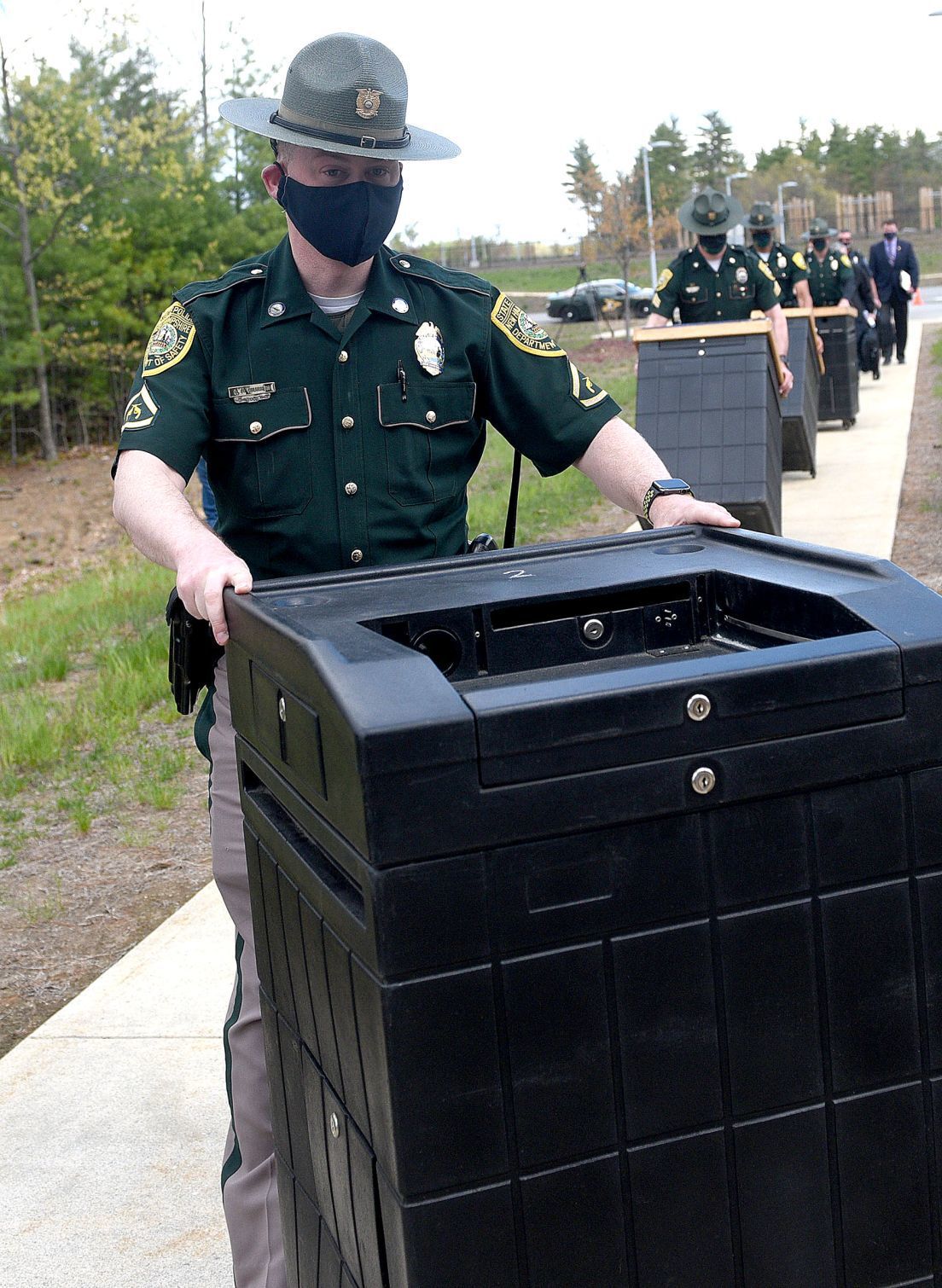 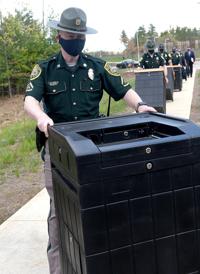 State troopers deliver Windham’s automated vote-counting machines to a secure facility in Pembroke for the forensic audit of the November 2020 state representative election. 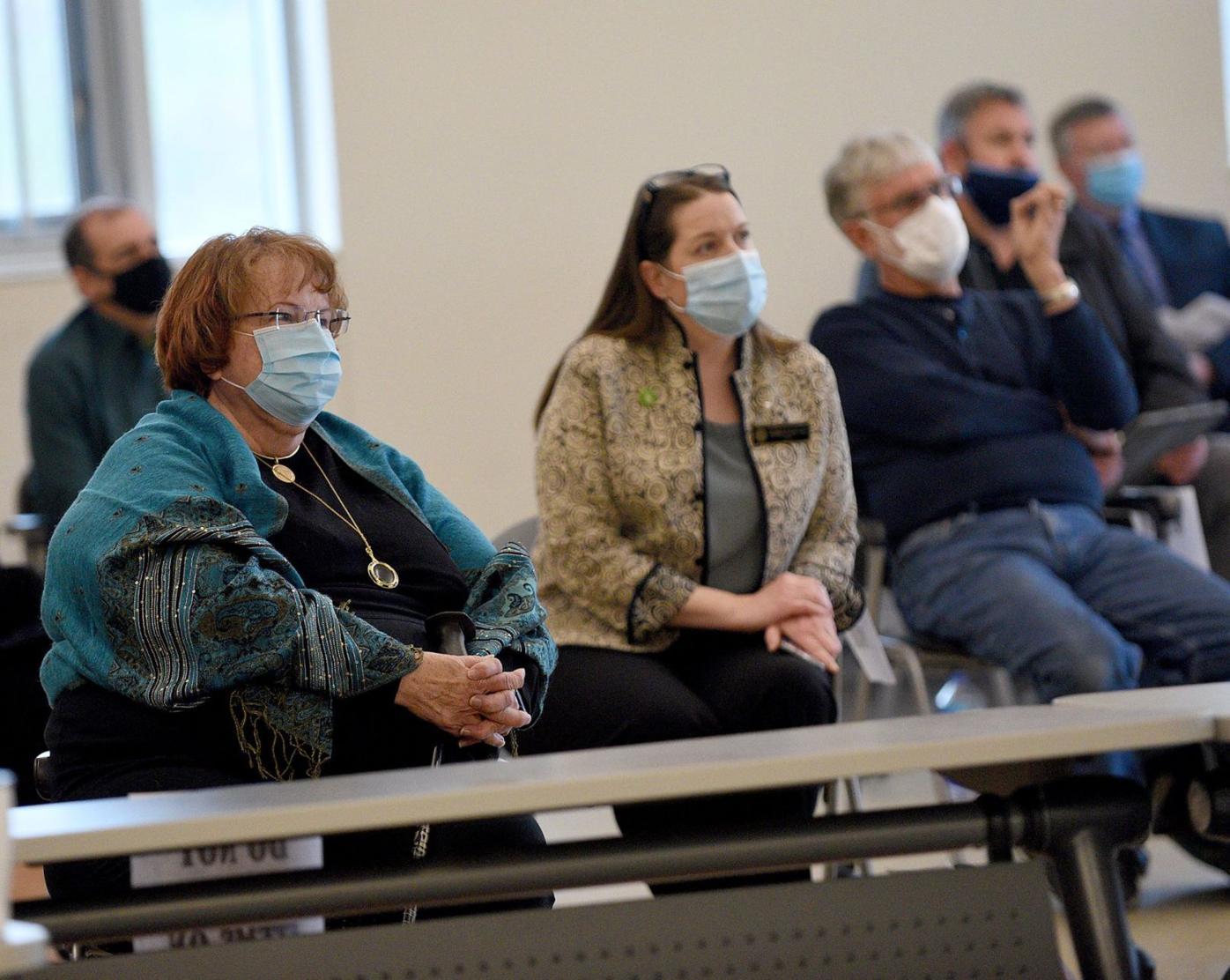 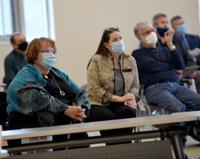 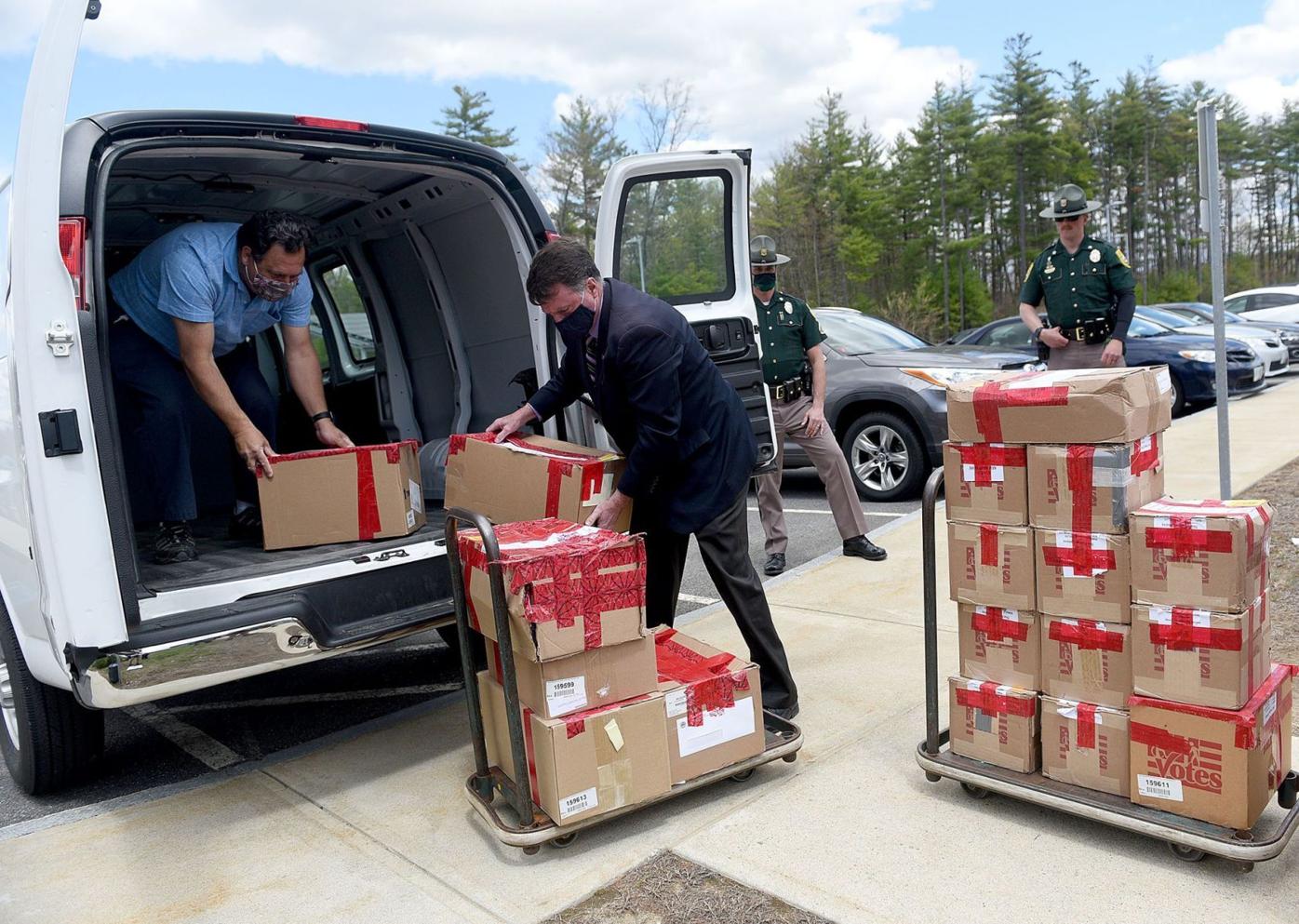 Richard Tracy, an investigator with the Attorney General’s Office, helps Peter “Hoppy” Falzone, a clerk for the state Division of Archives & Records, unload 26 boxes of ballots from Windham’s Nov. 3 election at the audit site in Pembroke. 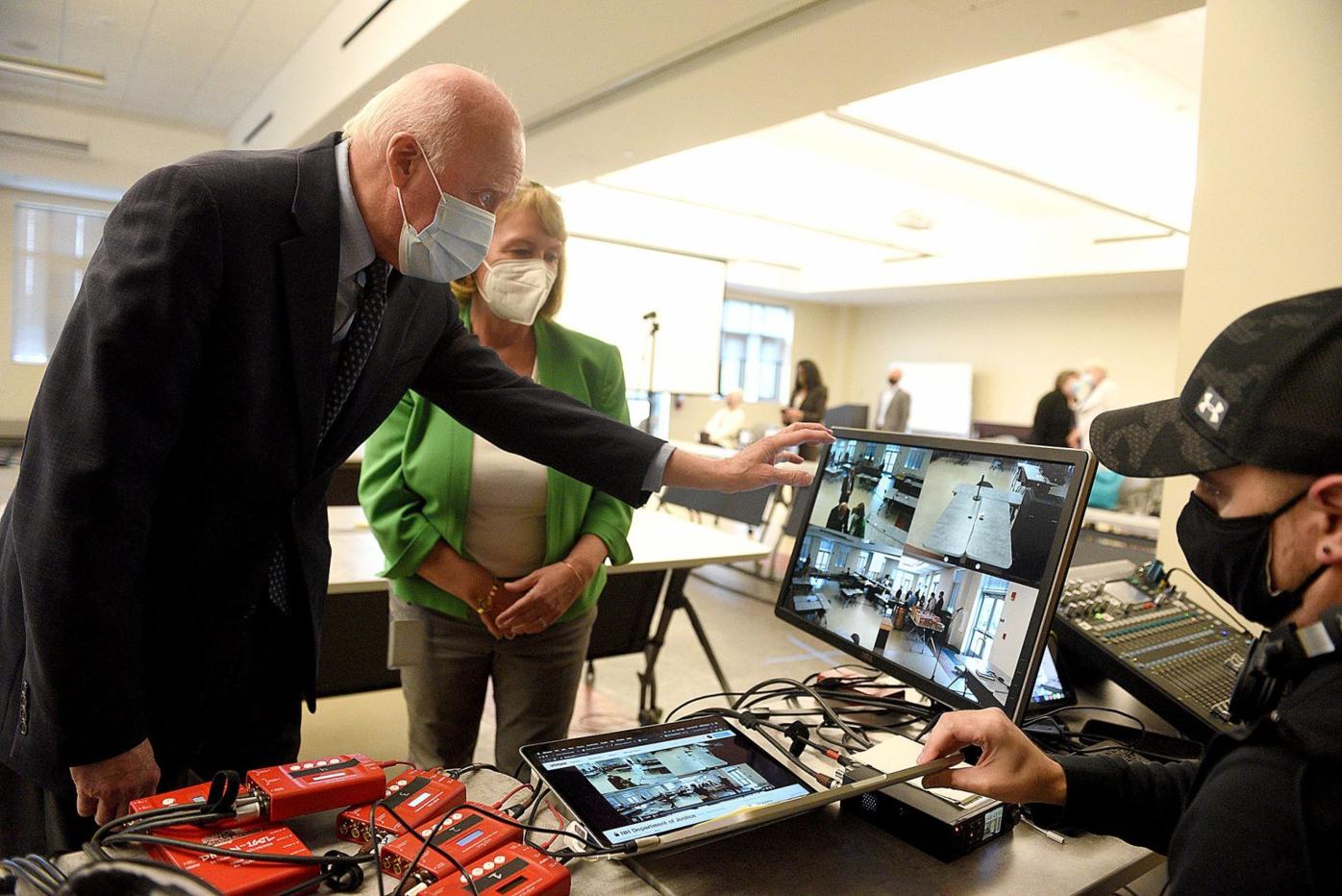 Secretary of State William Gardner asks questions about the camera placement for the live stream of the Windham election audit on Tuesday. Behind Gardner is Associate Attorney General Anne Edwards.

State troopers deliver vote-counting boxes that came from the town of Windham. Tuesday kicked off the first day of a forensic audit to try to determine what caused a discrepancy between the results on Election Night and a recount three weeks later of a state representative race in Windham.

State troopers deliver Windham’s automated vote-counting machines to a secure facility in Pembroke for the forensic audit of the November 2020 state representative election.

The goal of opening day was for the audit organizers to take physical custody of the four AccuVote automated counting machines used in the town, along with more than 20 boxes of paper ballots cast in the election.

All the materials were being delivered to the Edward Cross Training Center on the New Hampshire National Guard campus in Pembroke, where the audit will take place.

Seating for the audit is limited to about 60 people. On Tuesday, that included the media, state officials, election volunteers and a group of Windham residents who won a lottery to attend in person.

All proceedings in the audit will be livestreamed on the state Department of Justice website.

Over the next two weeks, the three-person audit team will try to come up with an explanation for the large discrepancy between the vote totals that came from automated vote-counting machines on Nov. 3 and a hand recount of all the ballots three weeks later.

After the recount, all four Republican candidates for the four House seats representing Windham received 300 ballots more than were reported on Election Night.

Kristi St. Laurent, the top-finishing Democrat who came in fifth, lost nearly 100 votes as a result of the recount.

“I am more confident than usual that we can have a good conclusive explanation, never guarantees,” said Harri Hursti, a Finnish election security expert and the state’s selection for the three-man audit team.

Mark Lindeman, the town’s selection for the audit team and an acting co-director of Verified Voting, a group that advocates for “the responsible use of technology in elections,” said “this fact pattern seems unusual if not unprecedented.”

The third audit team member, University of California at Berkeley statistics professor Philip Stark, was traveling Tuesday and was expected to arrive in New Hampshire on Wednesday, Hursti said.

The forensic audit was put in motion by a law passed by the Legislature and signed by Gov. Chris Sununu.

Under that law, the audit must be completed by May 27. To finish the job on time, the team may have to hold work sessions the weekend before that deadline, Hursti said.

Hursti said there are four steps to the audit. The first is to run the ballots through the automated machines; the second is a physical audit of all the individual ballots that were cast; the third is an audit of the machinery. The final step is a physical examination of characteristics of the ballots, such as the ink used, marks on paper and the ballot envelopes.

The vote-counting machines used in Windham and about 85% of cities and towns in New Hampshire are one of the oldest models in circulation, with a memory chip that dates back to 1981, Hursti said.

“This device is predating the internet,” he said.

Later he added, “The technology is so old that the modern computer is unable to read it.”

While it’s outdated, Hursti said, the machine is harder to hack than more modern vote-counting machines because the paper ballots it counts provide backup.

“This is still one of the more secure machines,” Hursti said. “This machine is way safer than a machine that has no paper ballot backup.”

During the audit, volunteer teams of five at each table will examine the ballots and report their interpretation about candidates’ votes.

Hursti said he would not be surprised if the audit came up with vote totals that differ from those on Election Night and at the recount.

“You should never have a preconceived notion about what you are going to find; it is very seldom that the difference comes from one source alone,” Hursti said.

Former school board member Ken Eyring had joined with Secretary of State Bill Gardner last February to propose a different process for the audit; a House committee rejected that plan.

A judge dismissed Eyring’s request for an injunction Tuesday afternoon.

Eyring had also opposed Windham’s naming of Lindeman as its audit team representative because Lindeman had opposed a Republican-generated audit of election returns in Maricopa County, Ariz.

Critics across the country have pointed to the Windham vote discrepancy to back up claims that the presidential election was tainted by inaccurate automated vote tallying.

Activists unhappy with the team selected to audit Windham’s state representative race have raised more than $72,000 with the stated aim of con…

An audit of the November 2020 state representative election in Windham will get underway Tuesday, state officials announced Sunday.

A forensic audit of automated vote counting machines in Windham revealed no evidence of fraud or tampering with those devices, officials said …