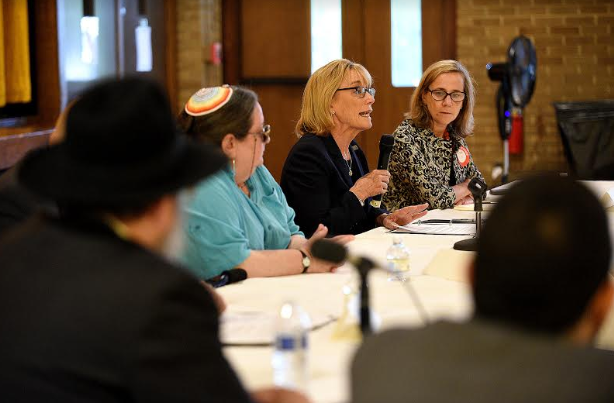 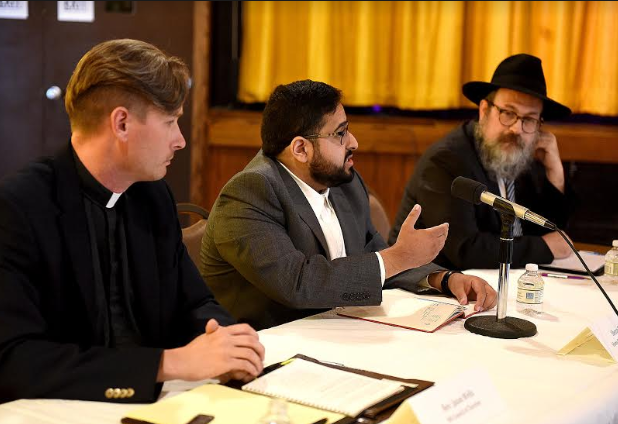 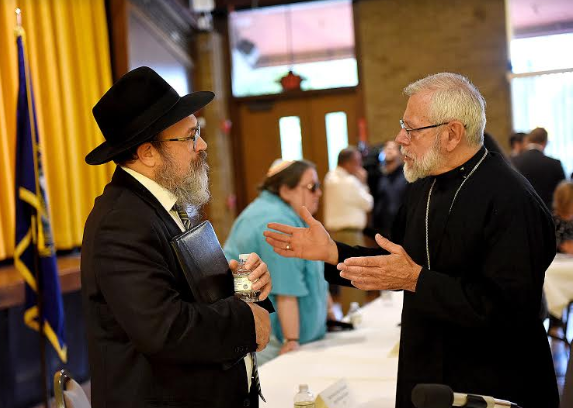 Peter A. Libasci, bishop of the Diocese of Manchester, right, speaks with Rabbi Levi Krinsky, executive director of Chabad of New Hampshire, after a panel discussion in Manchester on Tuesday on how to best prevent attacks against houses of worship in the state.

Temple Beth Jacob Rabbi Robin Nafshi said that 18 days after 11 worshipers were gunned down at the Pittsburgh Tree of Life Synagogue in October 2018, she began receiving emails from Brian Roberts of Concord who later was charged with threatening Gov. Chris Sununu and the State House.

“I was labeled the lesbian rabbi of New Hampshire. ... One day he parked on our street and put up a note that said, ‘Dear Jews.’ It wasn’t anything that crossed over the line,” Nafshi said.

Roberts was charged with criminal threatening, accused of sending a menacing letter to the CIA that said he was “going to shoot Gov state of NH no matter what.”

Days after the Pittsburgh massacre, Manchester police discovered a spray painted swastika on the floor of a gazebo in Wagner Park, less than a quarter of a mile away from Temple Adath Yeshurun. Police say several cars were also vandalized with spray paint and that obscene words had been spray painted on someone’s front door.

“We had folks who wouldn’t come back to synagogue after Pittsburgh until we hired a security guard here,” said Rabbi Beth Davidson.

Rev. Jason Wells, executive director of the New Hampshire Council of Churches, said that as an Episcopalian cleric, he knew there were religious haters among his and likely every Christian flock.

“If we say hate has no home here we can’t just remain silent when we know that hate is in our own house of worship,” Wells said.

During the latest Islamic celebration of Ramadan this past spring, Islamic Society of New Hampshire trustee Sheraz Rashid said, his members suffered taunts and worse.

“People have come out of the mosque to others heckling, telling them to go back to their home even though they are from here,” Rashid said.

Rashid praised the support his sect has gotten from other faith leaders.

“In New Hampshire we are proud to generally say hate has no home here,” Rashid said. “Our community has for the most part had the support of faith groups around us.”

Tuesday’s meeting provided those gathered the opportunity to discuss two federal grants that have gone to New Hampshire to help fight terrorist threats made against religious organizations.

The first $4 million grant goes to the state Department of Homeland Security and Emergency Management for the statewide response. The second grant of $150,000 goes to seven individual houses of worship, constituting the first time New Hampshire faith groups have received dollars directly.

FBI Supervisory Senior Resident Agent Michael Gibeley told the group it’s important to understand that much of this hate speech, if it’s not violent, is protected by the First Amendment.

“There are things that are First Amendment protected that get said but we may not necessarily like but are within the limits of the law and don’t allow us to open an investigation into the matter,” Gibeley said. “That presents a challenge: What is a domestic terrorism case and what is First Amendment-protected hate speech?”

Another obstacle is that, unlike with international terrorists, there is no federal law that defines domestic acts of terror as a separate crime. That means the conduct must be linked to another federal offense, such as a civil rights violation or hate crime, Gibeley said.

Further in contrast to international terror organizations, Gibeley said, there is no federal entity that designates domestic groups as terrorist cells.

Melanie Zelman McDonald, executive director of the Jewish Federation of New Hampshire, said this becomes concerning since, according to the Southern Poverty Law Center, New Hampshire is the New England state with the second-highest number of “hate groups” (10), with Massachusetts having the highest number (14).

Hassan said Sen. Chuck Grassley, R-Iowa, and she have asked the U.S. Department of Homeland Security to articulate its strategy for battling domestic terrorism. She said further federal legislation on this front remains a possibility.

“This is a subject of ongoing discussion in Congress right now about the tools law enforcement needs,” Hassan said.

“Manchester is a resilient community and we embrace our diversity, and certainly hate has no place in our community,” Craig said.

Meredith Cook, chancellor with the Diocese of Manchester, said the most painful talk in Roman Catholic parishes comes over whether to, and how to, lock up houses of worship to protect those inside.

“The unique challenge that houses of worship face is the accessibility and safety to folks,” Cook said.

Nafshi said her temple made that call about locking doors, opening them half an hour before and half an hour after services.

“Many a Friday night, I have wondered, ‘Is tonight the night I die because our doors are unlocked for a half an hour?’” she said.

Jewish Federation Preschool to close after 32 years of welcoming students

MANCHESTER — A well-known preschool in the city’s North End will close its doors in June after three decades of welcoming students, due to declining enrollment.

NEW YORK — An assailant who stabbed five people attending a party at an Hasidic rabbi’s home in what New York’s governor called an act of domestic terrorism appears to have been acting alone, police said on Sunday.

CLAREMONT — Claremont residents are going to have to get used to an atheist cutout mimicking the Christian Nativity as long as the city keeps putting religious displays on public property, according to resident Sam Killay.

Hospital's religious affiliation a non-factor for most patients

Nearly three quarters of Americans don't care about the religious affiliation of their hospital or healthcare network, but an equal number say they expect their healthcare preferences to take priority over the facility's religious doctrine, a new study finds.