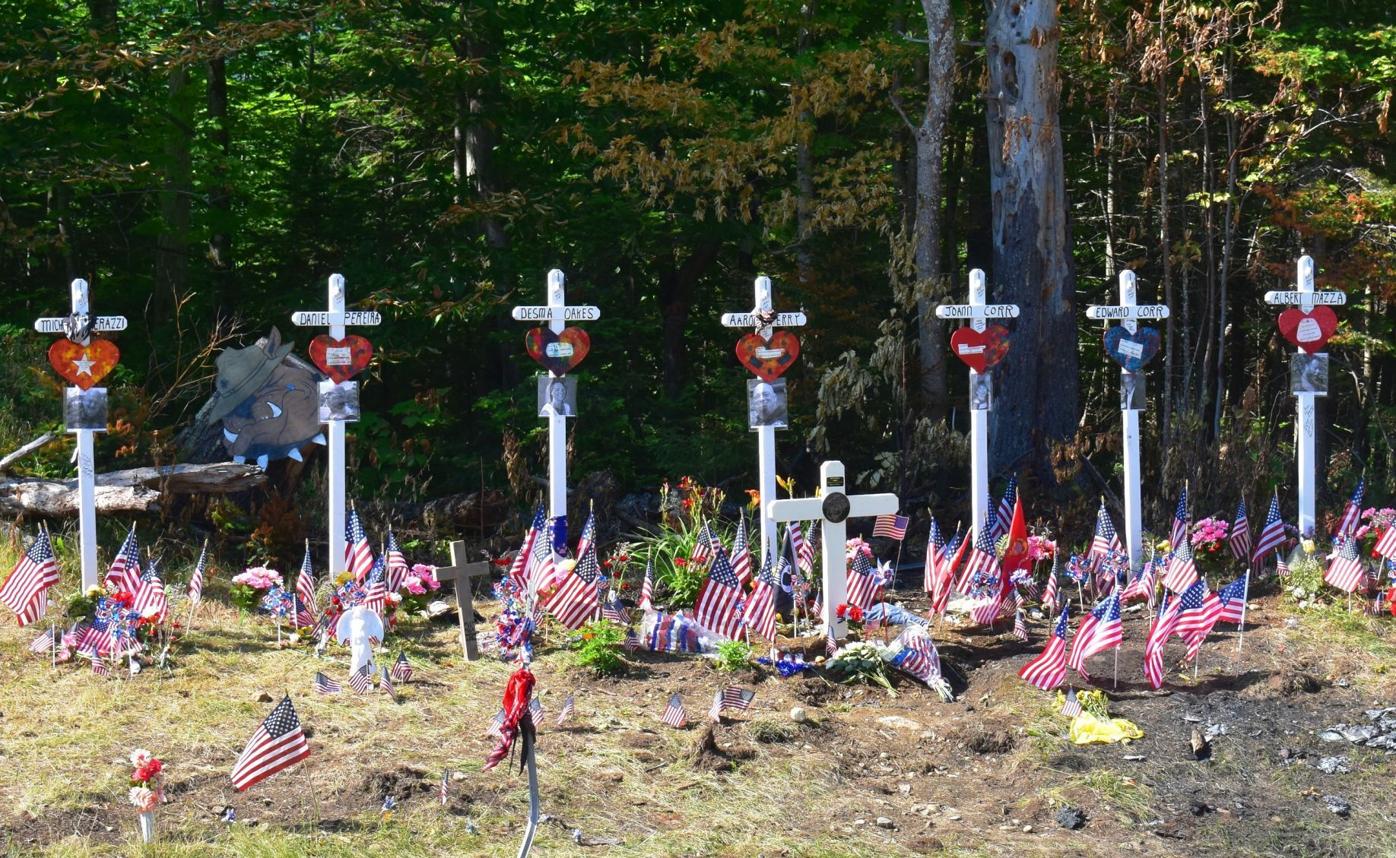 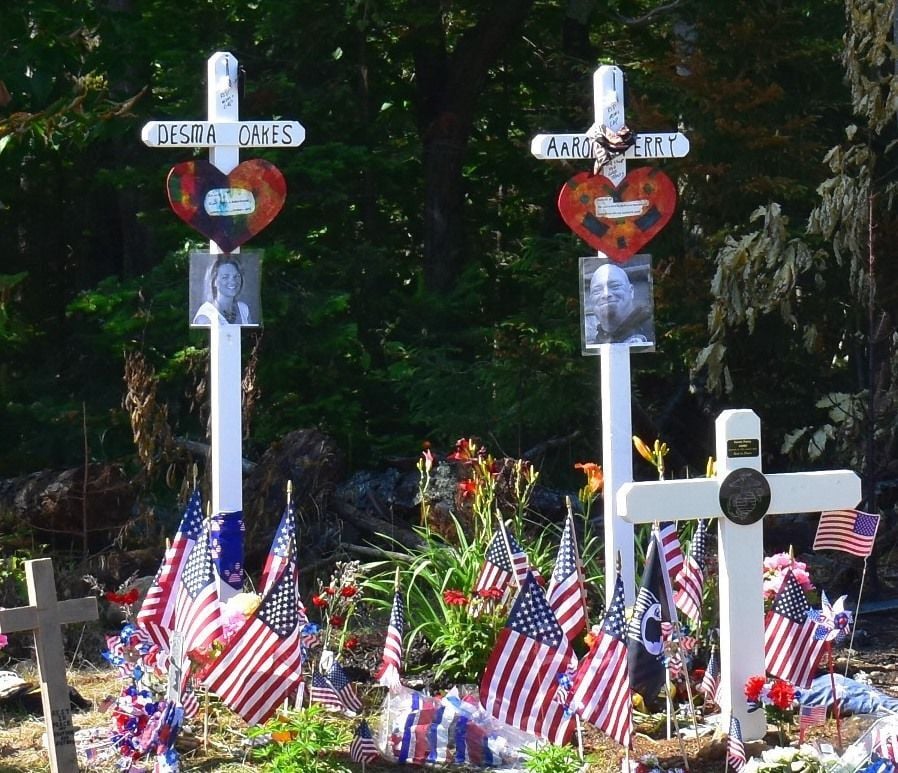 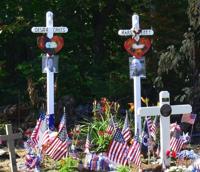 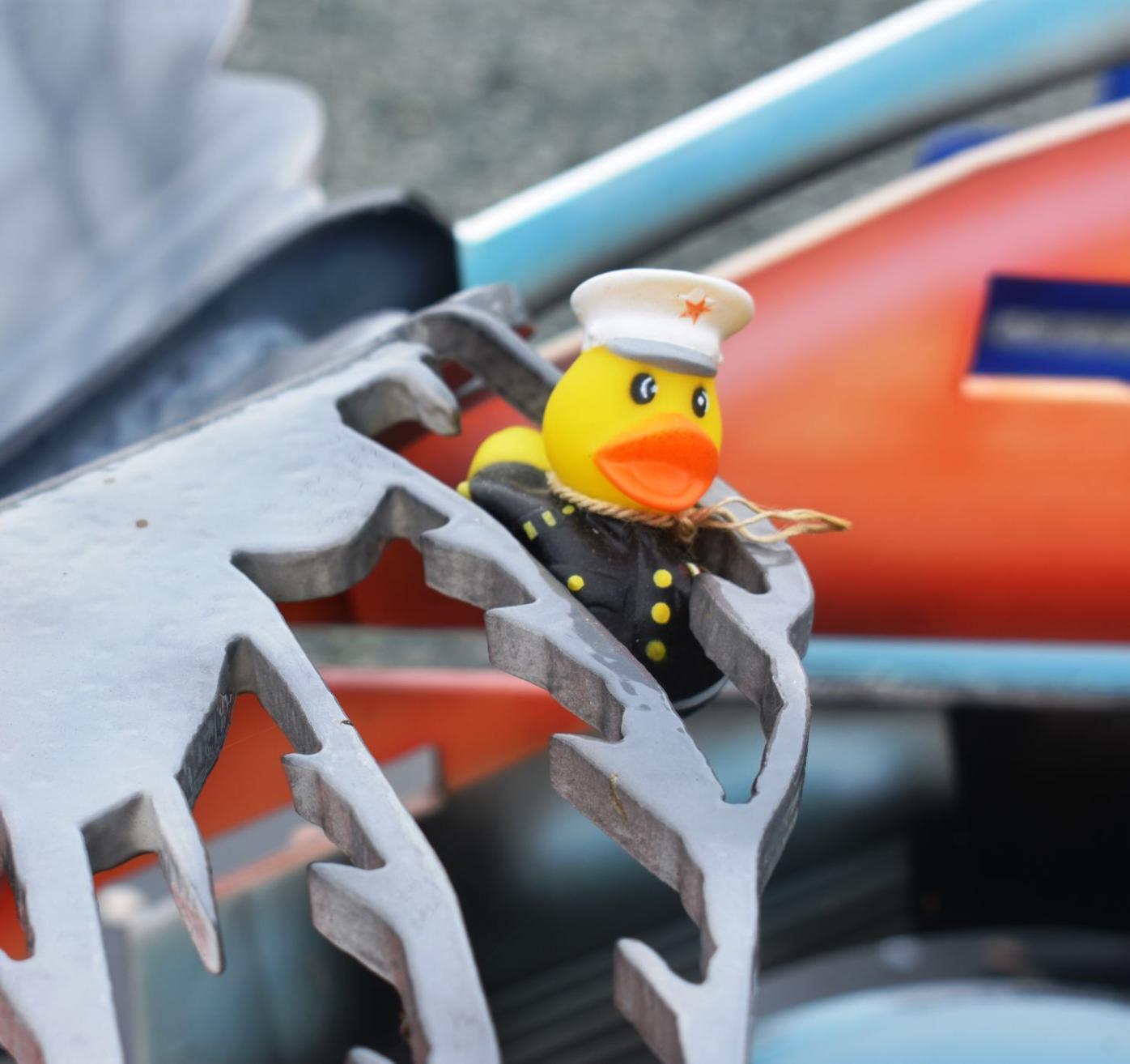 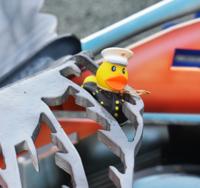 A rubber duck in a Marine Corps uniform inserted into the right wing of Aaron Perry’s motorcycle in a memorial sculpture at the Mount Jefferson View Motel and Cabins. 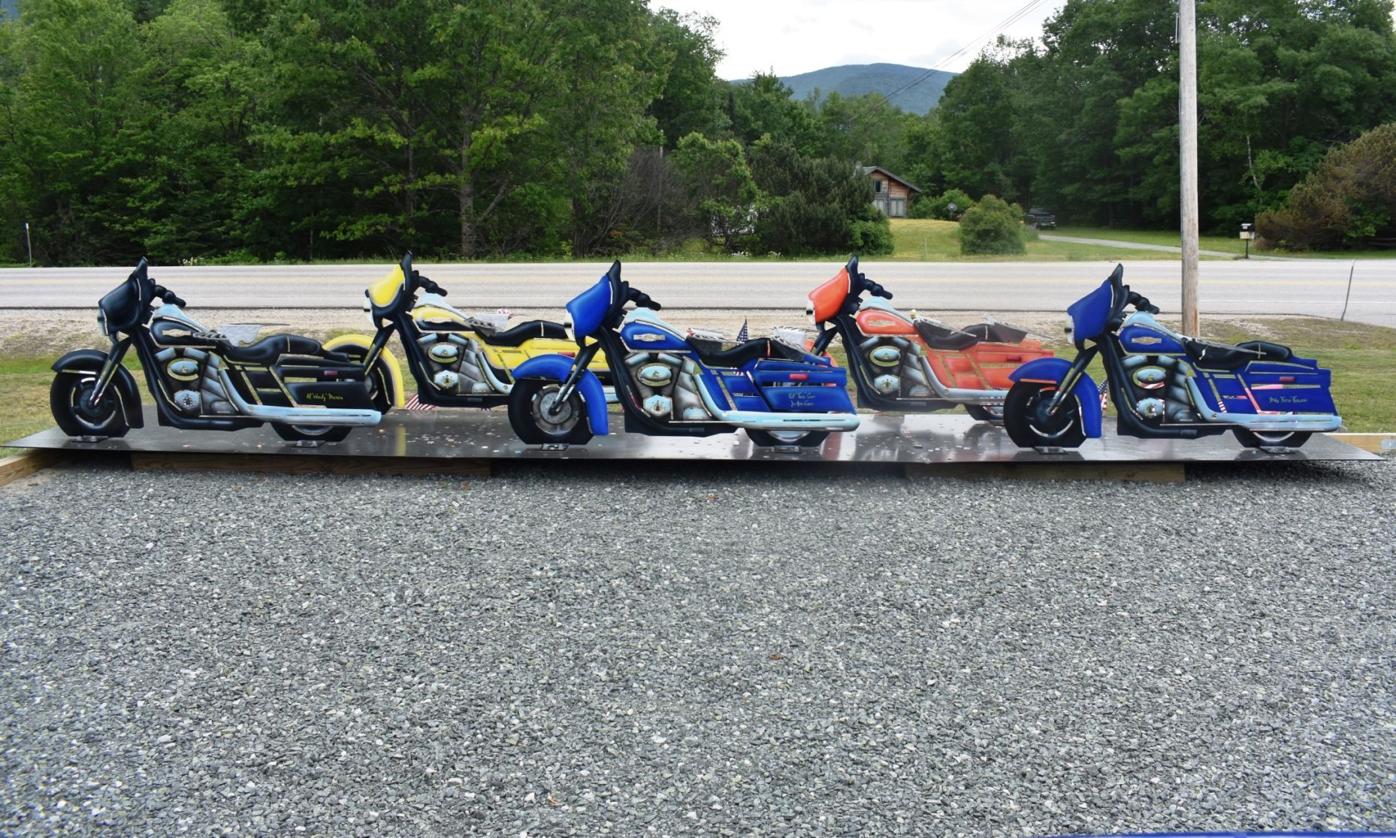 The “Fallen Seven” memorial sculpture at the Mount Jefferson View Motel and Cabins in Randolph. 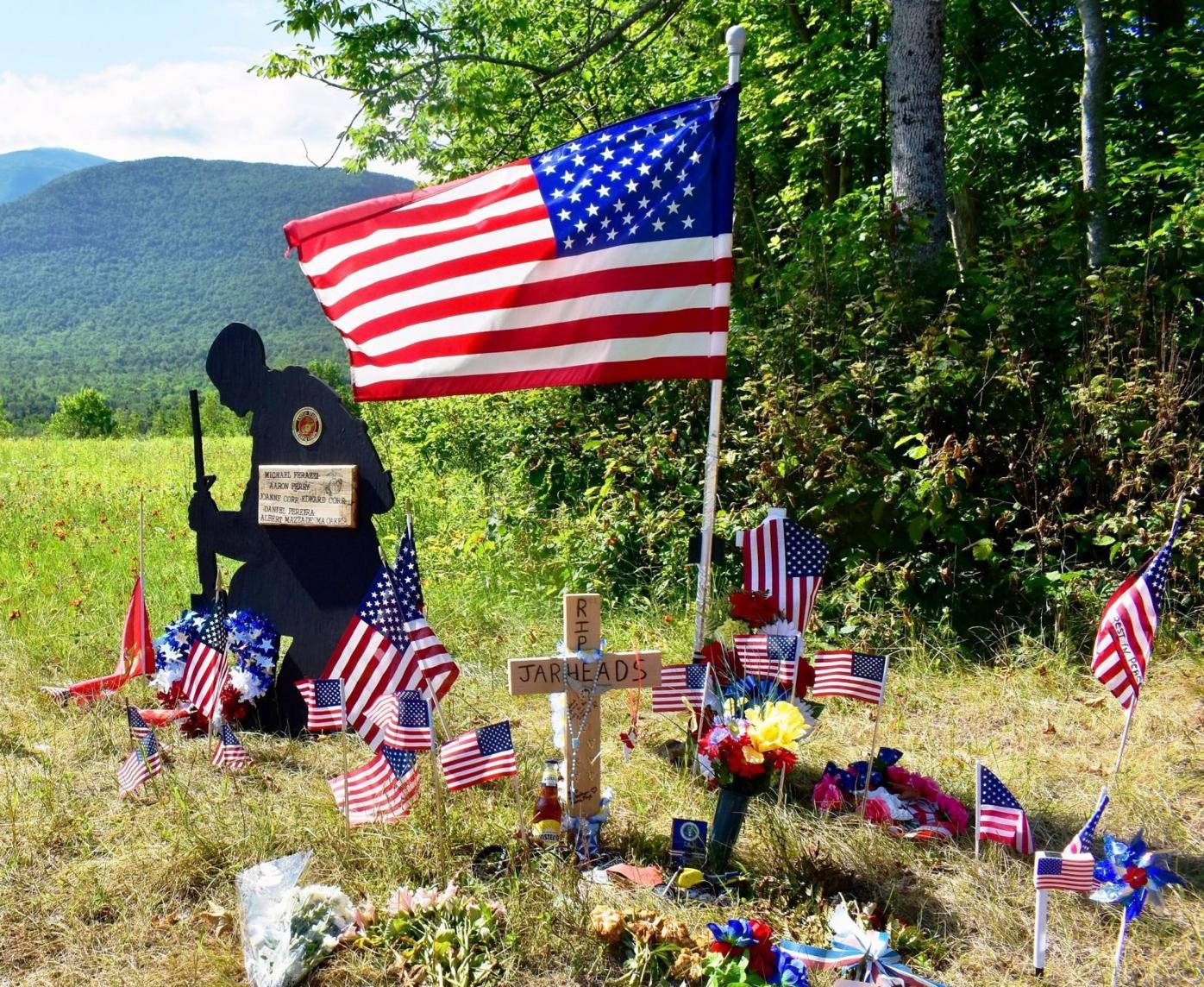 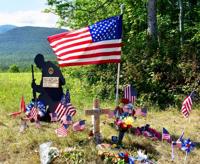 This display on Route 2 in Randolph sprang up almost immediately following the June 21, 2019 deaths of seven members and supporters of the Jarheads Motorcycle Club.

A rubber duck in a Marine Corps uniform inserted into the right wing of Aaron Perry’s motorcycle in a memorial sculpture at the Mount Jefferson View Motel and Cabins.

The “Fallen Seven” memorial sculpture at the Mount Jefferson View Motel and Cabins in Randolph.

This display on Route 2 in Randolph sprang up almost immediately following the June 21, 2019 deaths of seven members and supporters of the Jarheads Motorcycle Club.

Daniel Cook liked Aaron Perry because he was “a great guy” and a fellow Marine veteran. And he made Cook’s daughter, Desma, happy.

So two years ago last Thursday, when Desma told him that she and Perry and other members of the Jarheads Motorcycle Club were heading that weekend to Randolph, in central Coos County, Cook thought they would have a good time.

“It didn’t worry me,” said Cook, who lives in Norwich, Vt., with his wife, Debra.

“Riding in the North Country would be one of the safest places to ride,” he said, “a lot better than riding in Manchester and Concord.”

Along with five others, Desma, 42, and Perry, 45, were killed on June 21, 2019 in one of the deadliest, most horrific traffic accidents in New Hampshire history. The victims immediately became “The Fallen Seven.”

Assembling that Friday at the Mount Jefferson View Motel and Cabins on U.S. Route 2, a group of 15 motorcycles — 15 riders and seven passengers — headed east for the American Legion Family Post 82 in Gorham.

A few minutes before 6:30 p.m, within sight of the motel, the Jarheads encountered a westbound 2016 Dodge crew-cab pickup towing an empty vehicle trailer, driven by 23-year-old Volodymyr Zhukovskyy for Westfield Transport Inc.

Zhukovskyy was headed back to West Springfield, Mass., after making his last delivery at a dealership in Gorham, according to the National Transportation Safety Board.

In a report issued Dec. 1, 2020, the NTSB determined that “the probable cause of the Randolph, New Hampshire, crash was the pickup truck driver’s crossing the centerline and encroaching into the oncoming lane of travel, which occurred because of his impairment from use of multiple drugs.”

Seven people were injured in the accident and seven were killed, including five Jarheads — Albert Mazza of Lee; Perry, of Farmington; Michael Ferazzi of Contoocook; Edward Corr of Lakeville, Mass.; and Daniel Pereira, of Riverside R.I. — and two passengers — Joanne Corr, who was riding with her husband, and Desma (Cook) Oakes, who rode with Perry.

Zhukovskyy, who was not injured, was arrested at his home on June 24, 2019 and has been held since at the Coos County House of Corrections.

Out on bail at the time on a DUI charge in Connecticut, Zhukovskyy was indicted in October 2019 by the Coos County Grand Jury on a raft of charges, including seven counts each of manslaughter and negligent homicide.

On March 10 this year, another grand jury re-indicted Zhukovskyy on the same charges as in 2019 — absent the allegation that Zhukovskyy crossed into the eastbound lane and struck the Jarheads.

Instead, the indictments state that Zhukovskyy either caused a collision while operating the pickup truck or was operating it “in a dangerous manner.”

Zhukovskyy’s’ trial is scheduled to begin on Nov. 29 in Coos County Superior Court.

Cook is aware of the defense’s case but said it was clear Zhukovskyy’s truck was well into the eastbound lane of Route 2 when it struck the motorcycle that Perry and his daughter were riding.

According to Cook, Perry’s bike was the last one hit, a sad irony and bitter end to his eldest daughter’s frequently challenging life.

Born on Dec. 21, 1976, in Rome, Ga., Desma was named after her maternal grandmother, Desma Lucille. Her grandmother actually disliked “Desma” and went by Lucille, but her daughter, Debra, liked it so much she gave the name to her daughter.

At the time of her death, Desma was living in Concord, in the Cooks’ condominium, which she had planned to buy.

recounted that Desma was an inquisitive, energetic girl, who married immediately after graduating from high school. That union did not last long, however, and Desma later married George Oickle of Gilmanton.

The Oickles were married for 15 years and had two sons — Colby Tyler and Ryan Jacob. In May 2009, Ryan died of cancer at age 4. On Christmas Day 2012, George Oickle died at age 43, also from cancer.

Cook said his daughter married a third time, but like her first marriage, it lasted briefly.

A snowmobiler and a member of Childhood Cancer Lifeline NH, Desma met Perry about nine months before they were killed, Cook said. Things looked promising for her — Colby had “just graduated from Windsor High School” in Vermont, Cook said — and for Perry.

“Aaron was a great guy,” Cook said. “I really liked him.”

Tragedy at every turn

Two days before they were killed, Cook and his family had dinner with Desma at a West Lebanon restaurant. “We talked about all that stuff,” including the upcoming trip to Randolph, Cook said.

Asked how he learned what happened that day, Cook said, “I saw it on television, and, of course, I couldn’t get through to her.”

“The next day we had a local police officer come and talk to us.”

The family, which has known a lot of tragedy, is facing another one. Desma’s maternal aunt in Georgia recently was diagnosed with COVID-19 and given just days to live.

“It’s been one thing after another,” Cook said, “and I don’t really have an answer on how we coped with it. It’s just been putting one foot in front of the other.

“Ryan was my little buddy. Every time he was here he had to ride the lawn mower or get on my tractor. It’s a big loss for me, and then to lose the other two“ — George Oickle and Desma — “is just incredible.”

Cook said the Jarheads, who on Saturday were to unveil a granite memorial marker to the “Fallen Seven” at the Jefferson View next to a steel sculpture of the victims’ motorcycles, have been “phenomenal” in supporting him and his family.

He will never forget his daughter or Perry, Cook said.

As to the fate of Zhukovskyy, “I don’t see how he can’t be convicted,” Cook said. “This guy should have been tried a long time ago and it just didn’t happen, and whether it was COVID, here we are two years out and no trial yet.”

On Thursday, at the High Octane Saloon in The Weirs section of Laconia, the Turner family — John and his wife, Donna, and their daughter, Alicia — were planning a second “Fallen Seven” memorial ride.

The first ride, on July 5, 2019, weeks after the accident, originated at what was then known as the Broken Spoke Saloon. Upwards of 5,500 riders and passengers made the trip up Interstate 93 to Randolph and back to The Weirs.

said a second memorial ride is set for July 31. For logistical reasons, the ride won’t travel to Randolph, according to a club representative.

“We’re honored to host the ride,” Turner said, “and we enjoy supporting the Jarheads and their mission.”

She called the Jarheads “some of the most genuine people we’ve ever worked with.”

David Doyle, who with his wife, Ava, owns and operates Sun Valley Cottages in The Weirs, said he and Amy Landers, the executive director of the Lakes Region Tourism Association, “still plan another ride up there this summer” to remember the Fallen Seven.

Doyle, who got to know Aaron Perry through his father, William, said

he and Landers went up to Randolph after the 2019 crash and planted seven flags for the victims.

They left flowers and a note for Perry: “We love you, Aaron.”

Perry’s father, William (Bill) D. Perry Jr. of Sanbornville, said in a telephone interview on Friday that he had met Desma only a few times “and I didn’t know her all that well, but I liked her, and I know Aaron was crazy for her.”

Although Aaron was a Marine, just like his brother William “Doug” Perry III, and like their dad, “he wasn’t really following in my footsteps,” said Perry, but in Doug’s.

Perry said he visited the crash site in 2019 and saw the sculpture at the Jefferson View. His two other sons, Doug and Shawn, make pilgrimages to Randolph, said Perry, but “I don’t feel I have to do that. To me that’s morbid.”

His take on death, said Perry, was borne of his having seen much of it earlier in his life.

“I‘m a Vietnam vet. I was over in Vietnam so I saw death on an industrial scale. That makes you kind of immune to death no matter how close someone is. It’s a sad thing to say but that’s what war does to you.”

He said he takes consolation in the fact that “part of the original police report said that they died so fast that they didn’t even know they were going to be in an accident before they were dead. So there was no fear, no pain, it was just over and done in a split second, which if you can’t die of natural causes in your sleep, is probably the best way to go.”