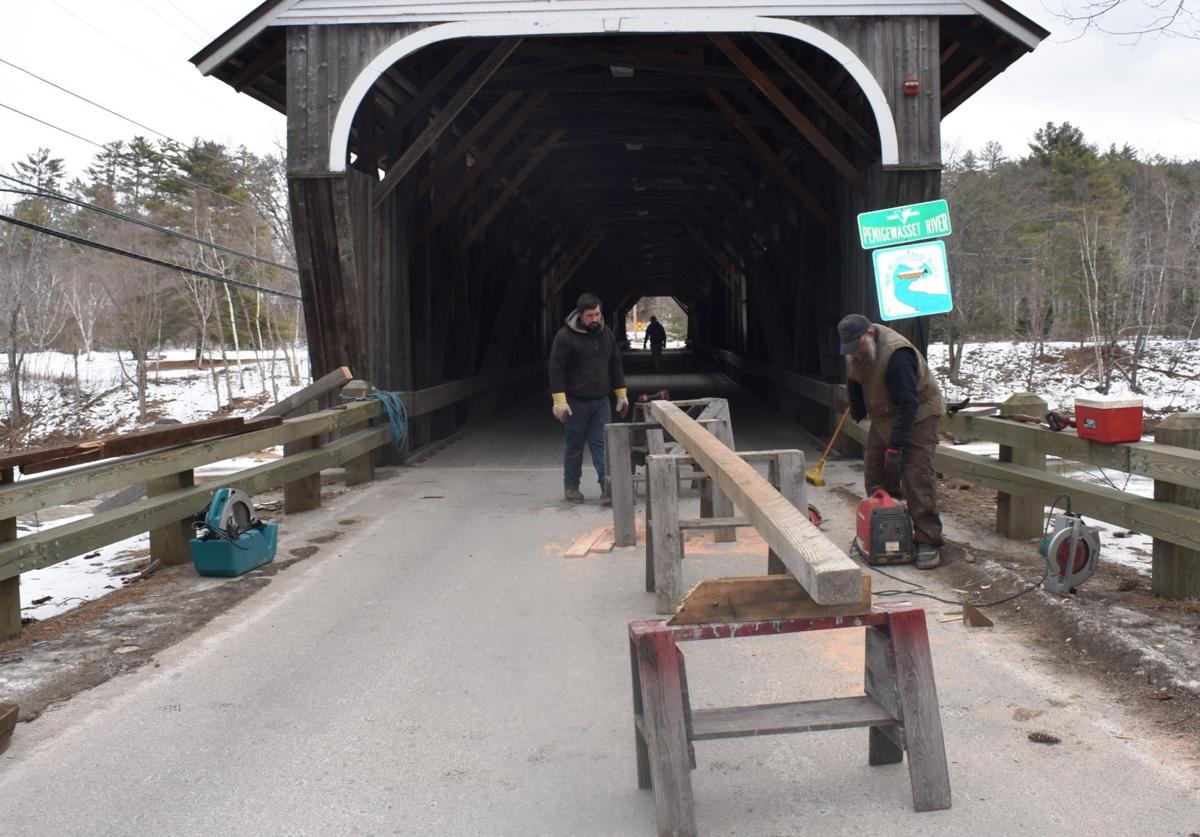 Tim Dansereau, left, vice president of Arnold M. Graton Associates, and employee Don Walker work Monday morning on the Blair Covered Bridge in Campton, which was hit by a box truck on Dec. 20. 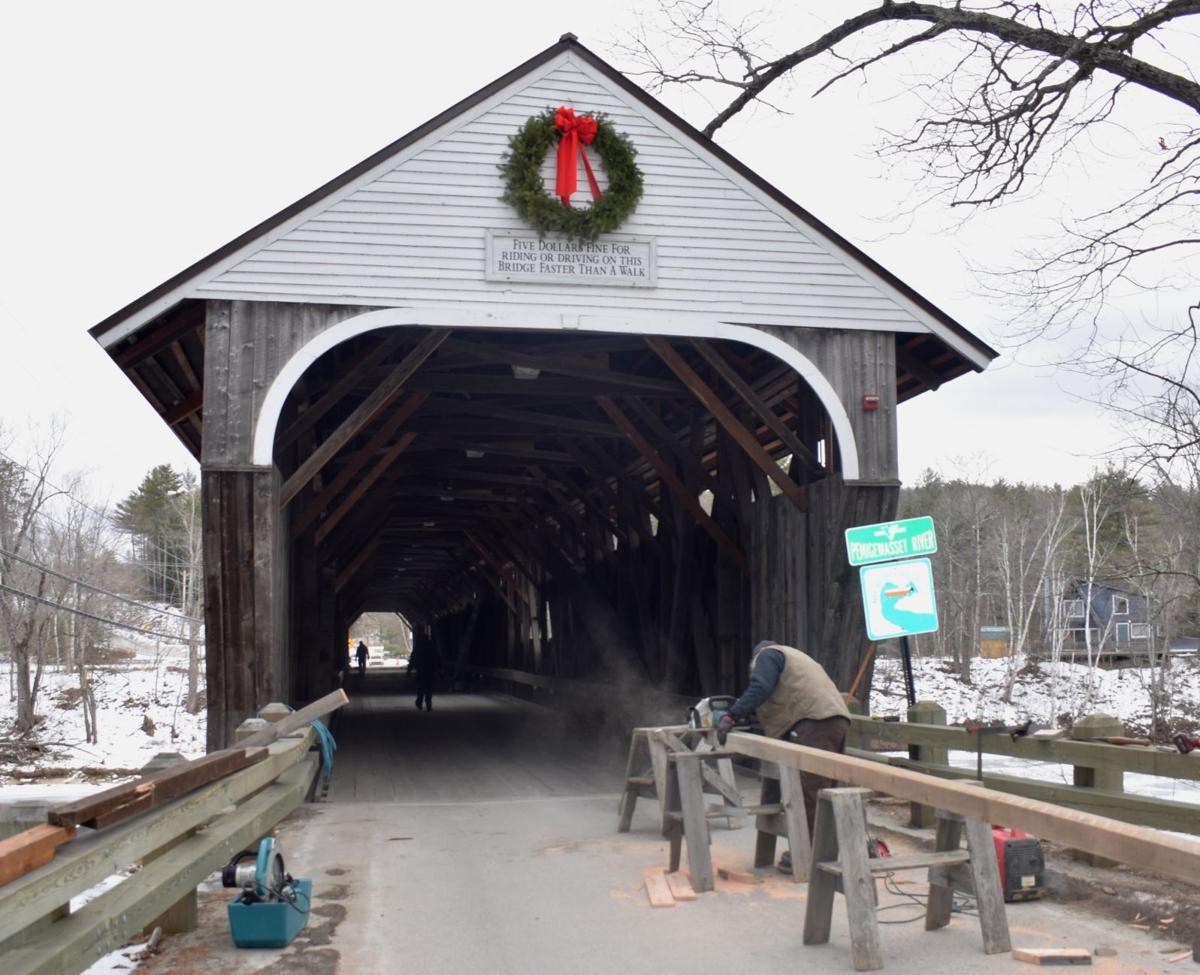 Don Walker of Arnold M. Graton Associates works Monday morning on the Blair Covered Bridge in Campton. The bridge is closed through Wednesday for repairs.

Tim Dansereau, left, vice president of Arnold M. Graton Associates, and employee Don Walker work Monday morning on the Blair Covered Bridge in Campton, which was hit by a box truck on Dec. 20.

Don Walker of Arnold M. Graton Associates works Monday morning on the Blair Covered Bridge in Campton. The bridge is closed through Wednesday for repairs.

CAMPTON — How can someone hit a covered bridge and drive away as if nothing happened?

That was the question Tim Dansereau had as he worked with a team Monday to repair the Blair Covered Bridge over the Pemigewasset River.

Since then, “The bridge has been hit, I think, four times,” said Dansereau, vice president of the company.

In December, a box truck that exceeded the bridge’s 8-foot height limit broke 12 of its 20 braces and damaged the other eight.

According to the New Hampshire Department of Transportation, the bridge was built in its present form in 1869, though there have been previous bridges at the site. Owned by the town of Campton, the Blair Bridge is a convenient way for locals to get between Route 3 in the west and Route 175. It is also a popular tourist attraction.

On Dec. 20, Dansereau said the driver of an eastbound box truck failed to see or ignored a sign on the approach to the bridge that warned that the maximum permitted height was 8 feet. The truck then drove onto and over the bridge, triggering a height sensor that took a photo of the vehicle.

Using the photo, Dansereau said the town was able to identify the delivery company that owned the truck and to settle with its insurer for the cost of repairs, which he said was about $12,000.

The bridge will be closed through Wednesday for repairs.

“We can’t figure out why they don’t stop,” Dansereau said. “If you hit a brace, you feel it, why wouldn’t you stop?”

He appealed to drivers to be aware of height and other restrictions when traveling on covered bridges.

Dansereau said his company, which specializes in covered bridges, has restored more than 70 bridges across the United States. It also has built 15 new ones, including the Packard Hill Covered Bridge in Lebanon.

He said covered bridges remain an important component of transportation systems because their lifespan is up to 300 years, compared to 50 to 60 years for a steel and concrete bridge. They also cost less to maintain, he said.

But covered bridges can’t compete with modern bridges in terms of the weight they can carry, he said.

“Here, it’s great,” Dansereau said of the Blair Bridge, “but you just can’t put them out on the interstate.”

Moments before an April 15 head-on collision on the F. E. Everett Turnpike that killed both drivers, a witness called 911 to report a vehicle had made a U-turn on the highway and was driving in the wrong direction, state police reported Wednesday.

Amherst bridge will be replaced

A failing bridge in Amherst will soon be replaced, and construction could take more than a year to be completed.

Hanover residents can now interact with the town's police department through a new smartphone app, the only one of its kind in the state.

FARMINGTON, Maine — A Wilton man was pinned in his overturned pickup truck Monday afternoon after a collision with a tractor-trailer on Routes 2 and 4, according to police Patrolman Jesse Clement.

Teen dies from injuries suffered in crash during Friday's snowstorm

Teen dies from injuries suffered in crash during Friday's snowstorm