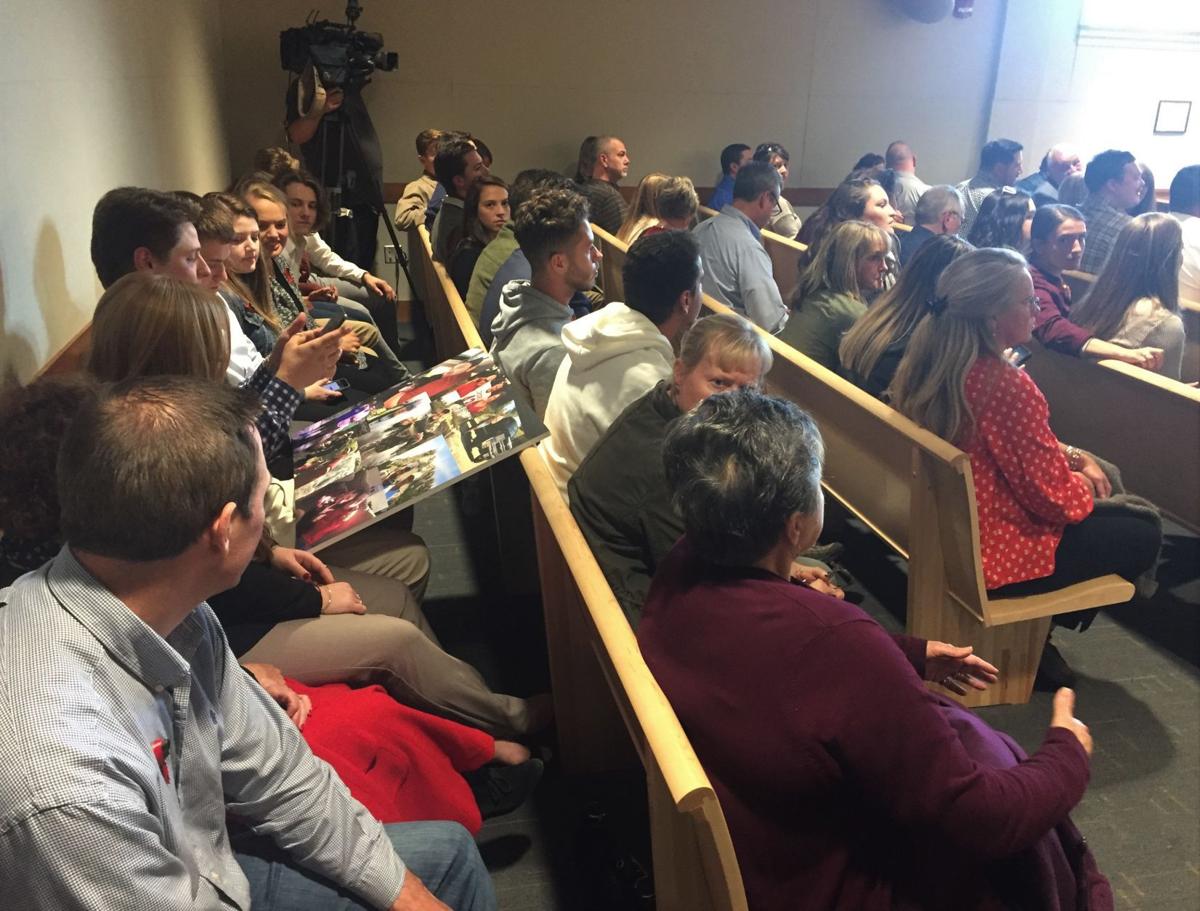 Friends and family of Tyler Shaw crowd into the Merrimack County Superior Court last October during the sentencing hearing of Joseph Leonard. Shaw’s mother, Beth, urged a state Senate committee Tuesday to more than double criminal penalties for repeat impaired drivers convicted of negligent homicide. In the back row, friends look at a collage of Shaw photographs. 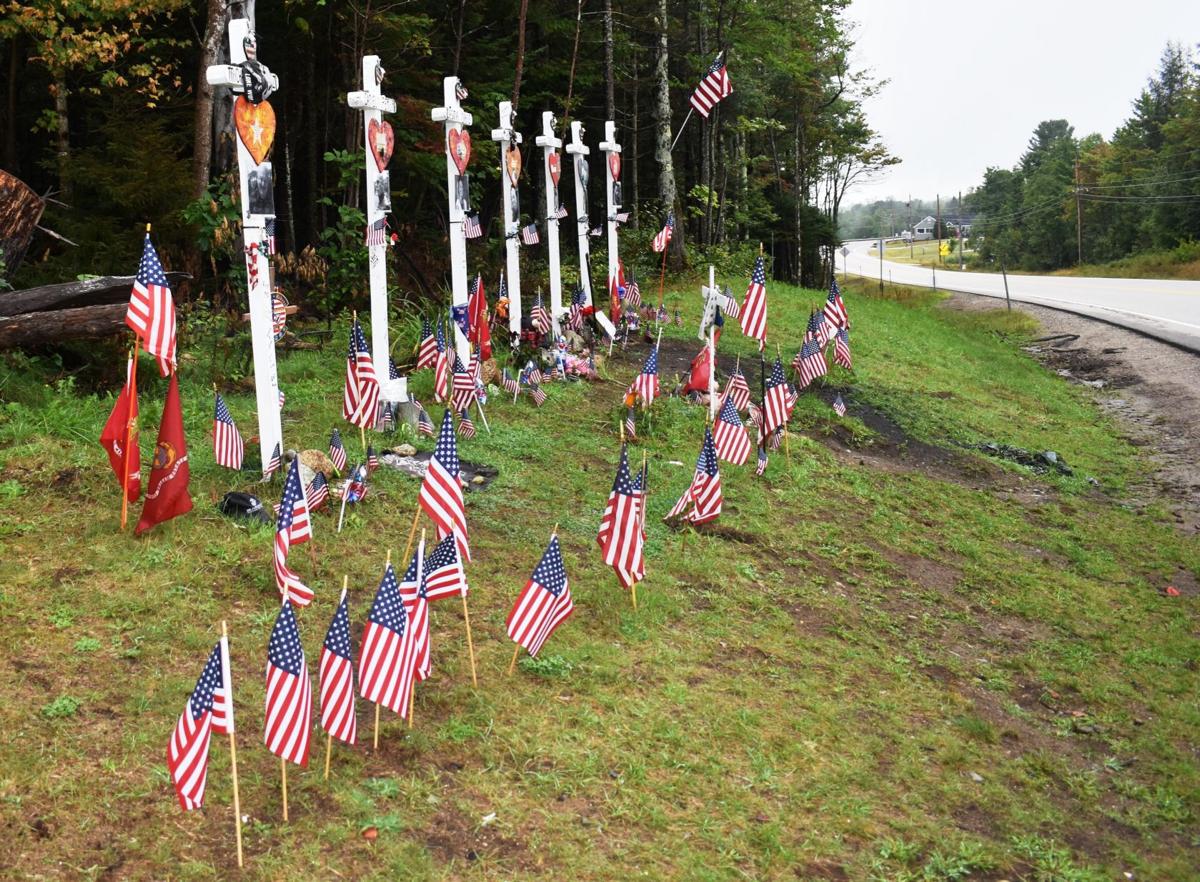 A line of crosses and American and Marine Corps flags mark the spot on Route 2 in Randolph where seven riders from the Jarheads Motorcycle Club were killed when a pickup truck swerved into their lane and hit them. A state Senate panel took testimony Tuesday on a bill to close loopholes and allow state safety administrators to immediately disqualify a trucker from driving after any of a variety of convictions including driving while drunk or on drugs.

Downed motorcycles and debris are scattered along Route 2 in Randolph last June 21, after a fatal crash that left seven people dead. On Tuesday, law enforcement officials and supporters urged lawmakers to stiff laws against truckers with impaired driving recordds.

Beth Shaw urged a state Senate committee to more than double prison time for someone with two previous drunken driving convictions who negligently kills someone in a third incident.

That’s the story of Joseph Leonard, 37, of Derry, now serving a six-to-12-year sentence for negligent homicide in a 2018 crash that killed Shaw’s son, Tyler.

Beth Shaw noted that Leonard received no jail time after a second DWI conviction in 2010, when his blood alcohol was three times the legal limit.

“I can’t help but wonder if a more appropriate penalty was given to Mr. Leonard, would he have learned his lesson,” she testified before the Senate Judiciary Committee Tuesday.

“More importantly for Tyler, he would be alive today.”

Shaw spoke in front of a collage of photos of her son.

“Help other beloved families whose lives are being altered in an instant without warning, without as much as a goodbye,” she said.

“Tyler Shaw’s Law” (SB 743), authored by Senate Majority Leader Dan Feltes, D-Concord, would increase the punishment in a case like Leonard’s to a 15- to 30-year sentence.

If the negligent homicide happened after one impaired driving conviction, the punishment under SB 743 would be 10 to 20 years in state prison.

“I don’t typically advocate for enhanced sentences. In this particular case, there is a glaring gap in our law,” said Feltes, a Democratic candidate for governor.

The same panel also heard arguments for a second bill, SB 649, which would allow the commissioner of safety to disqualify someone from driving a truck in New Hampshire for a least a year for a variety of offenses and serious violations, including driving while drunk or on drugs.

This measure grew out of a Division of Motor Vehicles review of all driver case files and relevant state laws in the wake of last June’s crash of a pickup and trailer on Route 2 in Randolph. The accident claimed the lives of seven members and friends of the Jarheads Motorcycle Club.

The driver of the truck, Volodymyr Zhukovskyy, 24, of West Springfield, Mass., is charged with seven counts of negligent homicide-DUI; seven counts of manslaughter; aggravated DUI; and reckless conduct.

He has pleaded not guilty. Jury selection for his trial is scheduled for November.

At the time of the New Hampshire collision, Zhukovskyy had a valid Massachusetts commercial driver’s license despite a Connecticut arrest in May 2019 and a lengthy record of driving violations and convictions.

After the incident, the Massachusetts official whose department failed to revoke Zhukovskyy’s license resigned and a multi-million dollar investigation was launched.

Sen. David Watters, D-Dover, said a Division of Motor Vehicles review showed that under state law the safety commissioner here first must hold a hearing before he can disqualify any truck driver’s right to drive.

“This makes so much absolute sense that you don’t wait around if someone shouldn’t be on the road,” Watters said.

The bill allows the truck driver to appeal the decision and request a Department of Safety hearing.

A truck driver who refuses a blood alcohol test would have his license suspended for a year if stopped here or in any state that shares motor vehicle records with New Hampshire.

At the time of the Randolph crash, Zhukovskyy was out on bail after refusing to submit to the test when he was arrested in Connecticut a month earlier.

Watters said lawmakers will consider other proposals to improve state oversight, including a bill that would require the state to gain access to and share its own records with a national commercial driving database.

“I can testify to the need to do everything we can to prevent the kind of tragedy we had in the town of Randolph,” Tucker said.

“I can’t think of a single incident that had more ripple effect than this one in our area.”

The life partner of one of the victims has filed claims.

RANDOLPH — A woman was hurt in a Friday evening snowmobile crash.

Syringes, exposed needles force a portion of hiking trail to close in Litchfield

With syringes washing onto shore along a section of Moore’s Falls in Litchfield, a portion of the popular hiking trail has been closed to the public.

Police determined Tyler Rancloes, 25, of Columbia, was at a small gathering in Columbia when the gun discharged.