At least one person is dead and one injured in connection to a fast-moving wildfire sweeping through Los Angeles County’s San Fernando Valley that fire officials anticipate could take days to contain.

The Saddleridge Fire has prompted mandatory evacuation orders for more than 100,000 people and has destroyed at least 25 homes. Meanwhile, dry, windy weather contributing to the fire’s spread may be worsening, officials said. 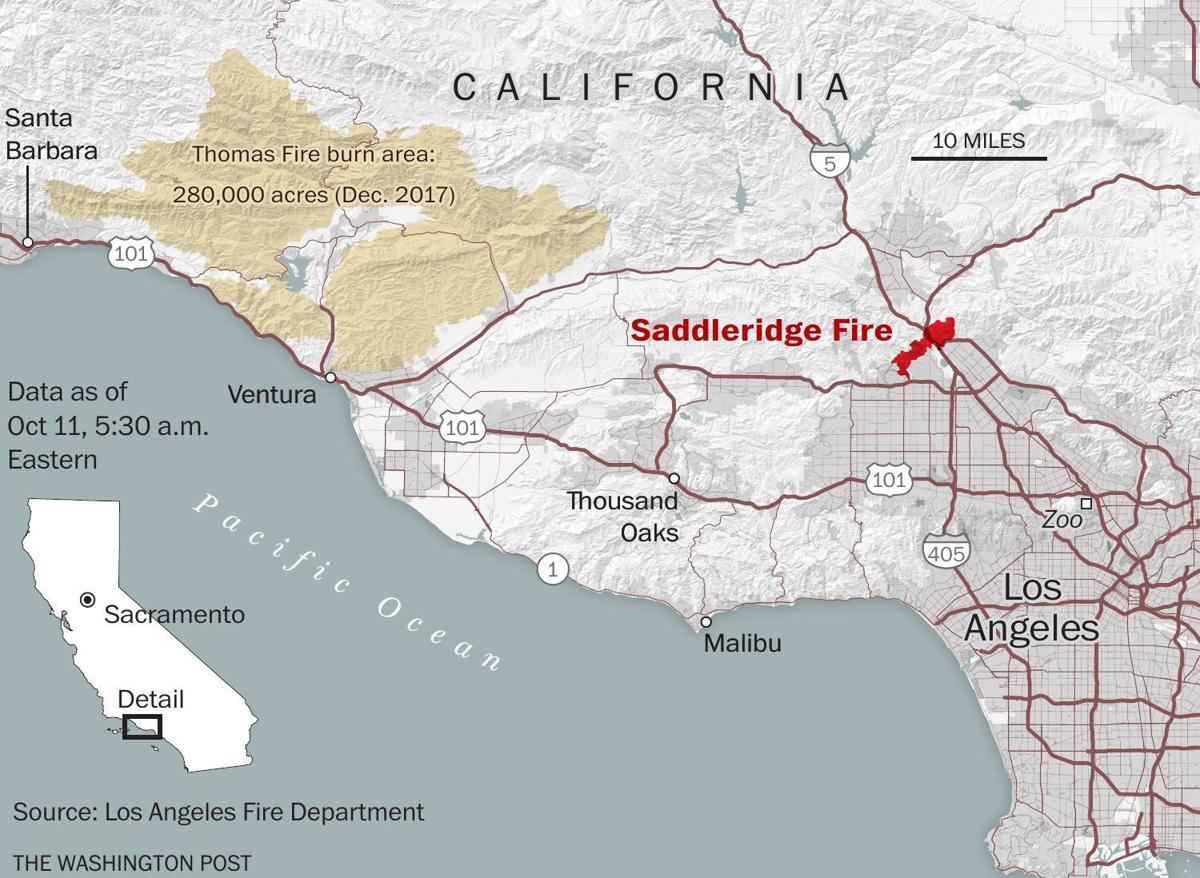 One man in his late 50s died overnight from cardiac arrest related to the Saddleridge Fire, and a firefighter suffered an eye injury but is recovering, Los Angeles Fire Chief Ralph Terrazas confirmed Friday morning.

“Nobody’s going home right away. This is going to take a few days,” Terrazas said during a Friday morning news briefing, where he noted that none of the fired had been contained.

The brush fire started in the Sylmar neighborhood around 9 p.m. local time Thursday and is engulfing an estimated 800 acres per hour. Early Friday, the fire exploded quickly, from 1,600 acres just after 2 a.m. to more than 4,600 acres less than two hours later. The cause of the fire is still unknown.

“This is an extremely dynamic, high wind driven fire,” the Los Angeles Fire Department said in an advisory.

Deputy Chief Al Poirier attributed the fire’s speed to “extreme weather of high wind and low humidity” and warned the fire was moving westward. As of Friday morning, officials said Porter Ranch was the hardest-hit of the local areas.

“If we’ve learned anything, particularly from the Woolsey Fire, please heed the directions of your public safety officials: Evacuate. Do not wait to evacuate. Please leave when you have the opportunity to,” Richardson said.

The Woolsey Fire ravaged nearly 100,000 acres north of Los Angeles in November, killing three people and destroying more than 1,600 homes and other buildings.

The Saddleridge fire’s flames are being fanned by strong offshore breezes known as Santa Ana winds, which are notorious for raising wildfire risks in southern California — particularly during the fall. Santa Ana winds transport extremely dry air toward the coast, with relative humidity hovering in the single digits in parts of Los Angeles on Friday.

This creates ideal conditions for rapidly spreading wildfires that can be nearly impossible to contain until the weather changes. The National Weather Service is warning that winds may not peak until midmorning Friday, with gusts up to 65 mph possible in some spots along the border between Los Angeles and Ventura counties.

Red flag warnings for “extreme” to “critical” wildfire conditions are in effect through Friday evening, as winds are expected to weaken Friday night.

Some local residents documented their up close encounter with the fire. In one video, a woman lurches her car on a road toward a flaming orange oblivion. “I can’t even see,” she says as her daughter records the moment. “We gettin’ the hell out of here.”

The dry and windy conditions set the stage for the Sandalwood Fire, another fire in Calimesa to the east. It was triggered by burning trash dumped by a garbage truck caught on video flying down the street in a swirl of smoke.

Hundreds evacuated a mobile home park after the Sandalwood Fire swept through a dry grass field and into the community. Rosie Castellon, a resident there, was separated from her dog.

Monster was still in the home and first responders forbade Castellon from braving the flames to rescue her pet, she told the local NBC station. But her paramedic cousin arrived and made the rescue, she said.

The status of her home was less certain. “It’s in the middle of that black smoke,” she said, looking back toward the community. “I don’t know if it’s still standing.”

The Saddleridge Fire comes a year since California endured its deadliest and most destructive wildfire season in history. In 2018, blazes raged in both the northern coast, more than 150 miles northwest of Sacramento, and in Los Angeles County to the south.

The Mendocino Complex fire to the north began in late July with the Ranch Fire that later converged with the separate River Fire. The collective blazes raged for more than three months and laid waste to 459,123 acres — roughly three times the size of Chicago.

Around the same time, the Woolsey Fire engulfed a section of southern California, torching 96,949 acres and forcing some 295,000 people from their homes.

The 2018 wildfire season was especially ferocious due to record-breaking heat in the summer, which only exacerbates wildfire risks in the state’s already dry, windy climate.

The energy company, whose equipment was deemed responsible for the November Camp Fire, made the unusual — and controversial — decision to enact the planned shutdown in an attempt to curb another round of disastrous fires, which are sometimes sparked when high winds bring down power lines in drought-stricken parts of the state.