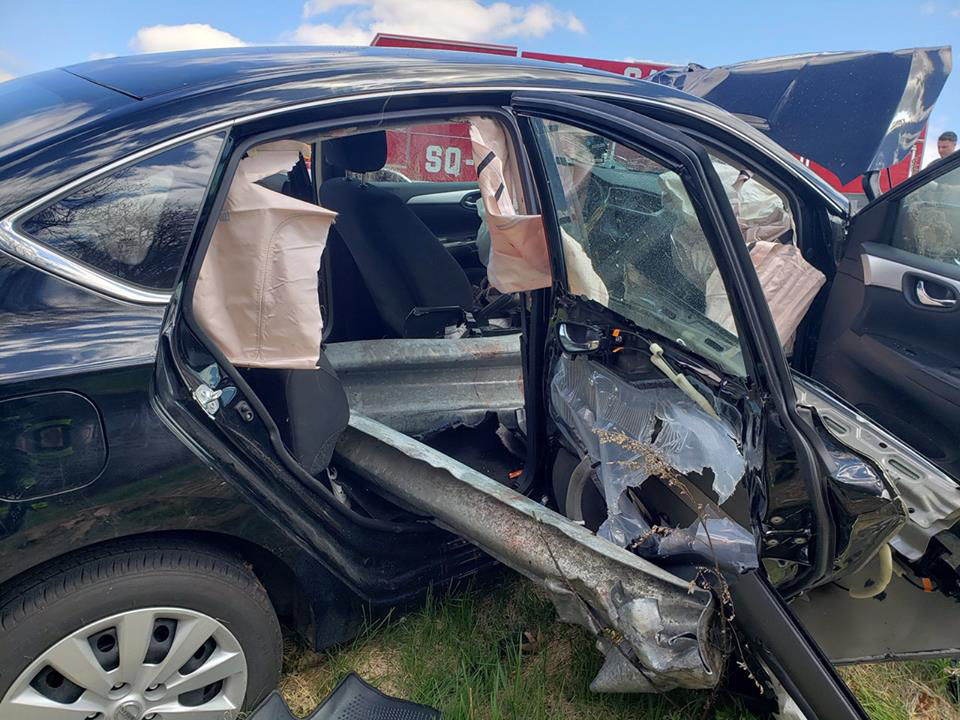 A Massachusetts man lost a leg in an April 25 crash on Interstate 93 in Salem when the car he was riding in went off the road and hit a guardrail, which pierced the car’s passenger compartment.

On April 25, Jorge Ramirez, 22, of Chelsea, Mass., had his leg severed by a guardrail in a crash in Salem.

A MedFlight helocopter lands April 25 at the site of the crash in Salem, just north of Exit 1 on Interstate 93.

A Massachusetts man lost a leg in an April 25 crash on Interstate 93 in Salem when the car he was riding in went off the road and hit a guardrail, which pierced the car’s passenger compartment.

On April 25, Jorge Ramirez, 22, of Chelsea, Mass., had his leg severed by a guardrail in a crash in Salem.

A MedFlight helocopter lands April 25 at the site of the crash in Salem, just north of Exit 1 on Interstate 93.

SALEM — The guardrail that speared a car and severed a young man’s leg last month is the same brand of guardrail that has been at the center of numerous lawsuits, including a federal suit by a New Hampshire woman who nearly lost her leg in a similar accident in 2014.

There has been a ban in New Hampshire on the new installation of ET-Plus guardrail terminals by Trinity Highway Products since 2014, according to the state Department of Transportation. But DOT says there are still about 3,000 ET-Plus units across the state, including the one involved in the recent accident in Salem.

On April 25, a Nissan Sentra collided with a guardrail near Exit 1 on Interstate 93. The driver, Jose Laguer, 24, of Boston, walked away with minor injuries, but his passenger, Jorge Ramirez, 22, of Chelsea, Mass., had his leg severed by the guardrail, which pierced the passenger compartment through the front of the vehicle, according to first responders.

In the moments before the Salem Fire Department and New Hampshire State Police showed up, civilians and plainclothes Salem detectives arrived on the scene, working to stem the loss of blood from Ramirez’s leg. He was ultimately flown out by MedFlight helicopter to Brigham and Women’s Hospital in Boston.

“I think Mr. Ramirez’s case proves that we are on notice that there is a dangerous product on our roadways,” said attorney Anthony Carr with the Shaheen and Gordon law firm.

While state police say the cause of the accident is still under investigation, Carr says the injury could be the result of the guardrail not performing as intended.

The design is meant to ensure the guardrail compresses and unravels, slowing a vehicle that impacts the end terminal. Instead, the impact plate often fails to make a consistent connection with a vehicle, and the guardrail jams a few feet from the end.

“What happens then … is it’s gonna cause the guardrail to form a kind of spear,” Carr said.

Lawsuits have alleged that the defect is the result of undisclosed design changes Trinity made in the early 2000s, without any engineers on their payroll, and with the apparent intent to reduce material costs.

Carr represented Cheryl Turgeon of Deerfield and her husband, Marc, in a federal suit that was settled last fall. He said Turgeon’s case is strikingly similar to what happened to Ramirez.

On July 17, 2014, Turgeon fell asleep at the wheel and crashed into an ET-Plus guardrail end terminal in Stoddard. According to the suit, the guardrail “penetrated the vehicle like a spear, piercing the driver’s side passenger compartment,” severely injuring Turgeon.

Turgeon’s leg was nearly lost but surgeons were able to reattach it.

The Turgeons filed suit in June 2015. A federal judge denied a motion by Trinity requesting summary judgment, and it was settled last September with undisclosed terms.

There are still thousands of ET-Plus units in the state, which make up about 11 percent of the terminals installed across 4,600 miles of state-maintained roadways.

In 2014, New Hampshire put a stop to new installations because of the Federal Highway Administration’s review of the system service records, according to the DOT.

That same year, a federal jury in Texas found that Trinity had defrauded the government and the plaintiff was awarded a $663.4 million settlement, which was later overturned by the 5th U.S. Circuit Court of Appeals in 2017. Earlier this year, the U.S. Supreme Court declined to hear a bid to reinstate the earlier judgment.

Before emergency crews responded to the recent crash in Salem, Ramirez was attended to by passing motorists, including a registered nurse, a former EMT and Salem detectives.

Their fast actions may have saved Ramirez’s life, the nurses who treated him on the helicopter later told the Salem Fire Department.

Dennis Pietro of Rindge said he was driving north on I-93 with an employee when he witnessed the crash. As a former EMT in Massachusetts, his instinct was to immediately pull over and render aid.

“I was an EMT; I’ve seen tons and tons of car accidents but never one like this,” Pietro said.

He said he was joined by a truck driver, a registered nurse and some Salem police officers in plain clothes.

Those officers were detectives Michael Geha and Robert Farah.

Geha said he and Farah were in their unmarked police car coming off Mall Road about to take a left toward the station onto Rockingham Boulevard when the call came in over the radio. They took a right onto the highway instead and got to the crash site moments later.

He said he interacted with the passenger briefly, told him to remain calm, and loaned him his belt to create a tourniquet around his leg.

“I’ve had that belt for like over a decade,” Geha said. “That was my lucky belt.”

One bystander held the patient’s head, while another had to walk away because he was visibly shaken by the traumatic scene.

After leaving the passenger in the care of Pietro and the nurse, Geha said he focused on the driver, who was roaming around in shock. Geha also made sure other passersby moved along in order to limit the number of people on scene.

He was quickly relieved by Salem Fire and state police.

“Honestly, it seemed like hours but it was just minutes,” Geha said.

Pietro said he also loaned his belt to create a tourniquet.

“The kid’s leg was sheared off at the knee,” Pietro said.

He said Ramirez appeared to be calm despite the traumatic injury, perhaps yet unaware of the seriousness of his injuries.

The nurse who helped was wearing a medical boot on his foot but it fell off because he ran so quickly to the crashed car, according to Pietro.

“It was kinda nice to see that happen instead of people driving by,” Pietro said.

The civilians worked at cutting airbags, removing car batteries and debris from the passenger compartment, he said.

Pietro said he saw a dog jump out of the car just after the crash, and it appeared to have ended up in the care of a woman who was driving by. State police have been unable to share any information regarding the dog or names of witnesses.

Geha said they carry a standard issue tourniquet in their car from now on.

“We have it right on the handle, right above where I sit,” Geha said.