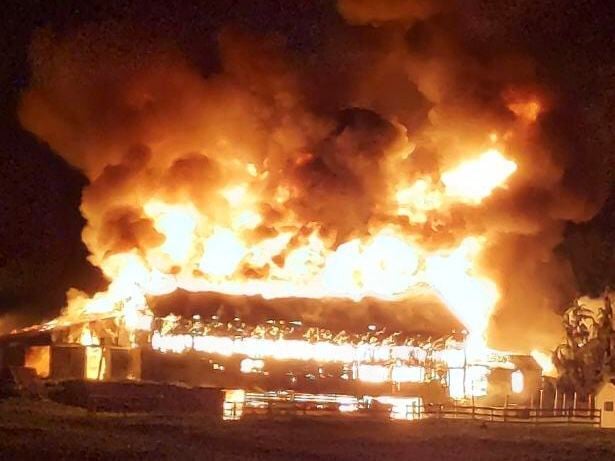 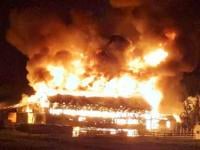 Flames engulfed a large barn on the Scamman Farm in Stratham Monday night. 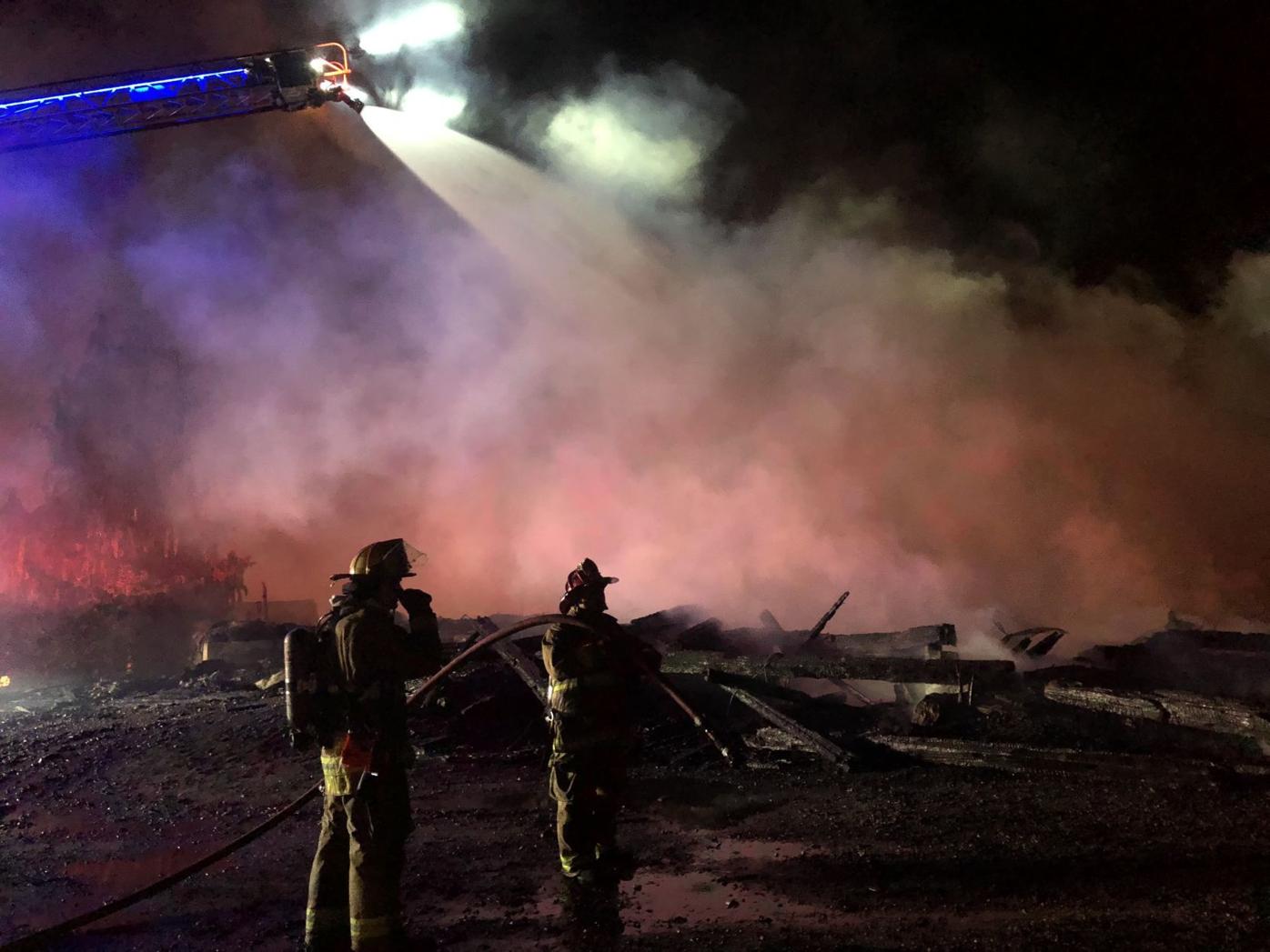 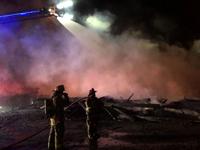 Firefighters continued to douse the smoldering ruins from a large barn fire at the Scamman Farm in Stratham early Tuesday morning. 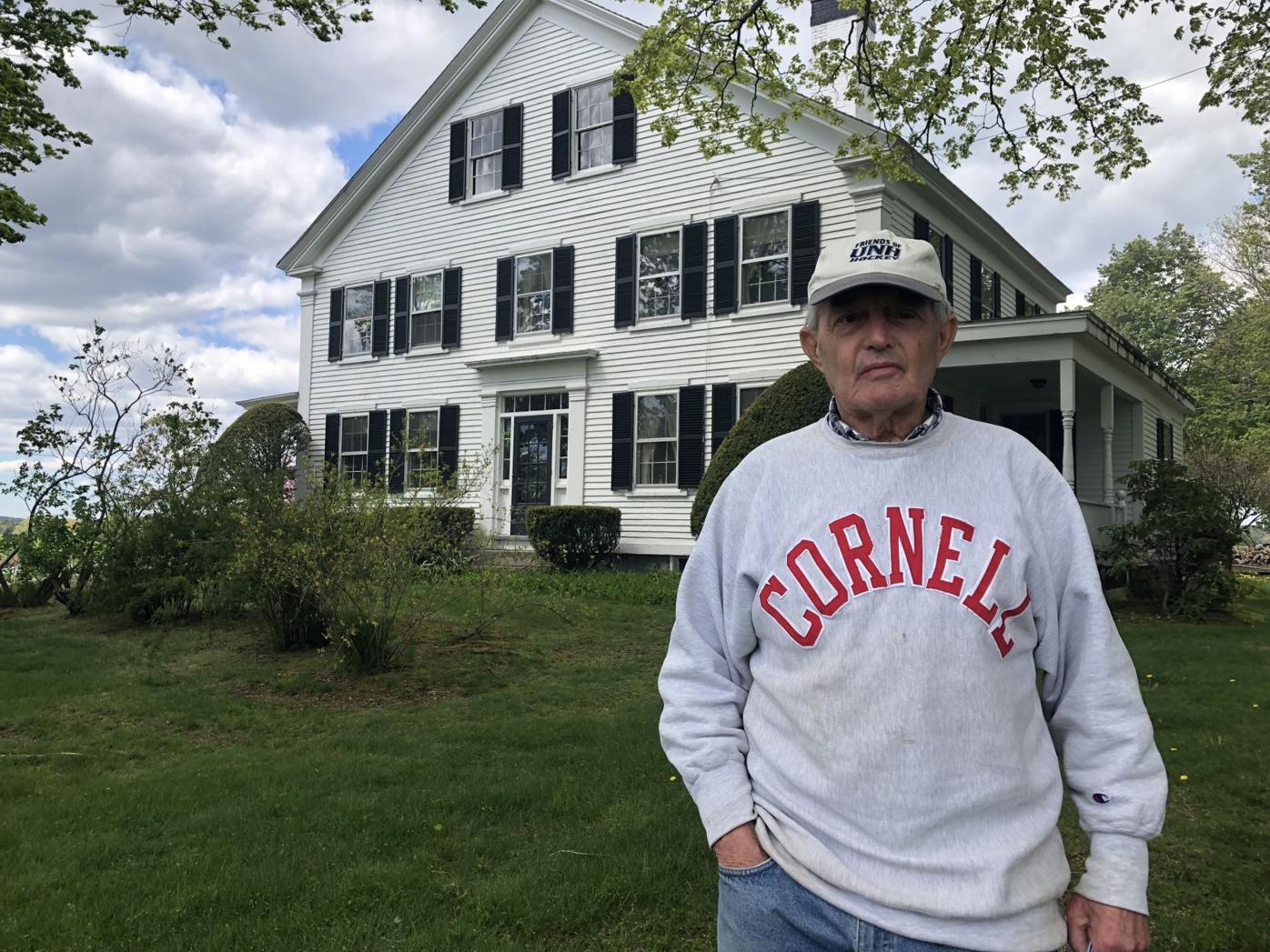 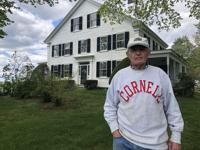 Doug Scamman said he was thankful that his family’s home wasn’t damaged in the Monday night fire at their Stratham farm. 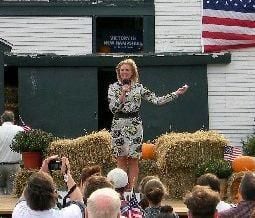 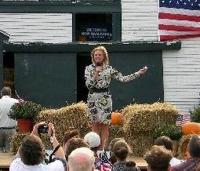 Ann Romney campaigns in September 2012 at the Scamman Farm in Stratham for her husband, then-Republican presidential candidate Mitt Romney.

A 185-year-old barn at the Scamman Farm in Stratham that has served as a backdrop for Republican presidential candidates on the campaign trail in New Hampshire was a smoldering pile of rubble Tuesday morning.

A massive three-alarm blaze that tore through the barn at the historic farm late Monday night also charred another smaller structure built in 1750 known as the “tool shed,” which was recently renovated, and melted windows on a second barn.

“It hurts, but fires hurt everybody when they come,” said Doug Scamman, who owns the 200-plus-acre family farm with his wife, Stella.

The fast-moving fire broke out just after 10:30 p.m. and destroyed the barn, along with decorations used for the farm’s popular corn maze and other fall festivities that were stored inside.

Firefighters released some goats into the field, but weren’t able to save nearly 300 chickens that were part of the Scammans’ egg business.

The family bought the 18th-century farmhouse and the land at 69 Portsmouth Ave. in 1972 when it operated as a dairy farm.

The farm was added to the National Register of Historic Places in 2019.

“This is absolutely devastating to the family,” said the Scammans’ son, Bruce, as dozens of firefighters from around the Seacoast battled the flames and kept a close eye on cars parked at the BMW of Stratham dealership next door to make sure none of the embers damaged the vehicles.

Stratham Fire Chief Matt Larrabee said the fire moved so quickly that there was little that could be done to save the barn, which was used mostly for storing hay, decorations, tent supplies, tools, a pumpkin stand for the farm’s pumpkin business, and smaller equipment like chainsaws.

“It’s a big loss to the town and the Seacoast area. Obviously the farm is used quite a bit during different seasons throughout the year,” he said.

The cause of the fire wasn’t immediately known. Firefighters remained at the scene into Tuesday while investigators from the state Fire Marshal’s Office arrived to begin searching for clues.

Larrabee, who was one of the first firefighters on the scene, said the blaze was reported by a passerby.

Doug Scamman, 79, said he had just dropped off someone in Newfields and was heading home when he saw the flames.

“When I was coming in from Newfields across the bridge I said, ‘That’s my barn,’” said Scamman.The Scammans’ son, Kirk, commended the firefighters for their response and efforts to save the goats.

“The chickens were not so lucky,” he said.

This is the fourth fire that his parents have experienced, but Bruce Scamman said he was relieved that no one was hurt.

“That’s all that matters,” he said.

In a tweet, Gov. Chris Sununu said he was thankful that the Scammans were safe.

“The Scamman Farm has been a bedrock in southern NH for generations. We wish them all well as they rebuild to the future,” he wrote.

The Scammans are a prominent family in town and are well known locally and across the state.

Doug and Stella Scamman are influential Republican leaders who have enjoyed hosting political events at their farm over the years. Doug Scamman is a former speaker of the state House of Representatives.

The late Warren Rudman, who served in the U.S. Senate from 1980 to 1993, was the first candidate to stump at the farm.

Former President George W. Bush drew a crowd of more than 5,000 when he visited in 2004. His father, George H.W. Bush, also came to the farm when he was president.

Countless Republican presidential candidates and others seeking elected office have made stops at the farm over the years, including Mitt Romney, who announced his run for president there in 2011.

The barn was often decked out for the occasion with decorations placed on the roof.

“It was nice to be able to do it,” Doug Scamman said.

The family was considering some improvements to the barn before the fire hit, but is now hoping to rebuild from scratch.

“We’re going to have to think about how we’re going to do it. We’ve got quite a mess to clean up there,” Scamman said.