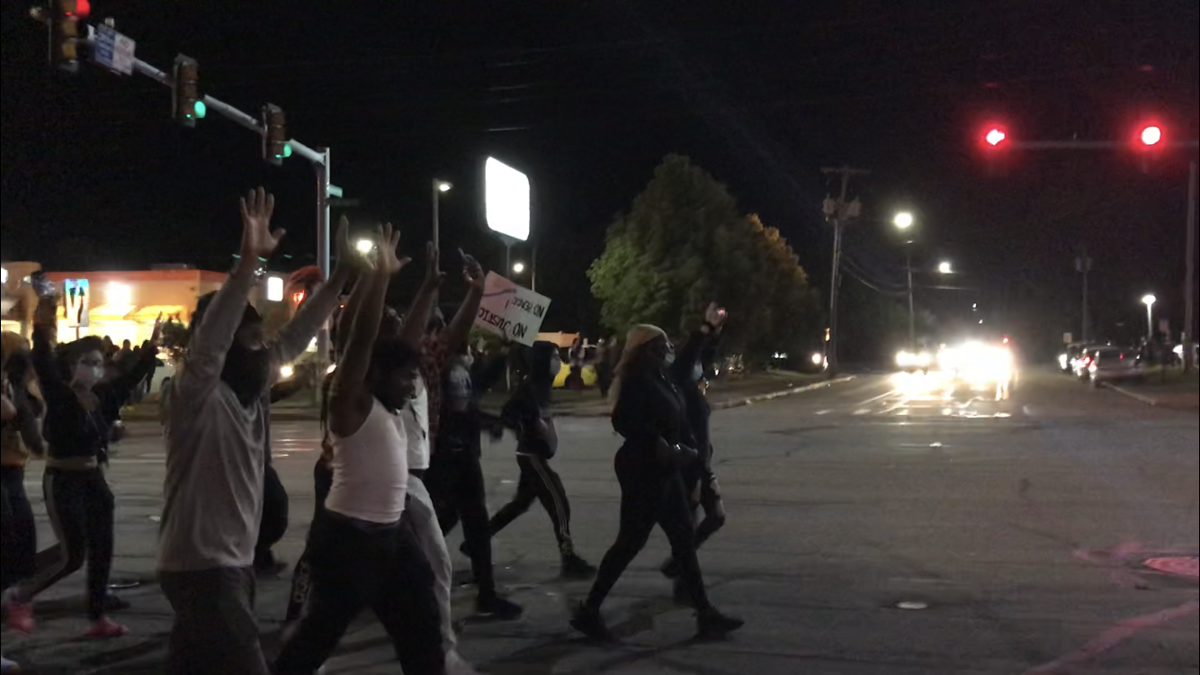 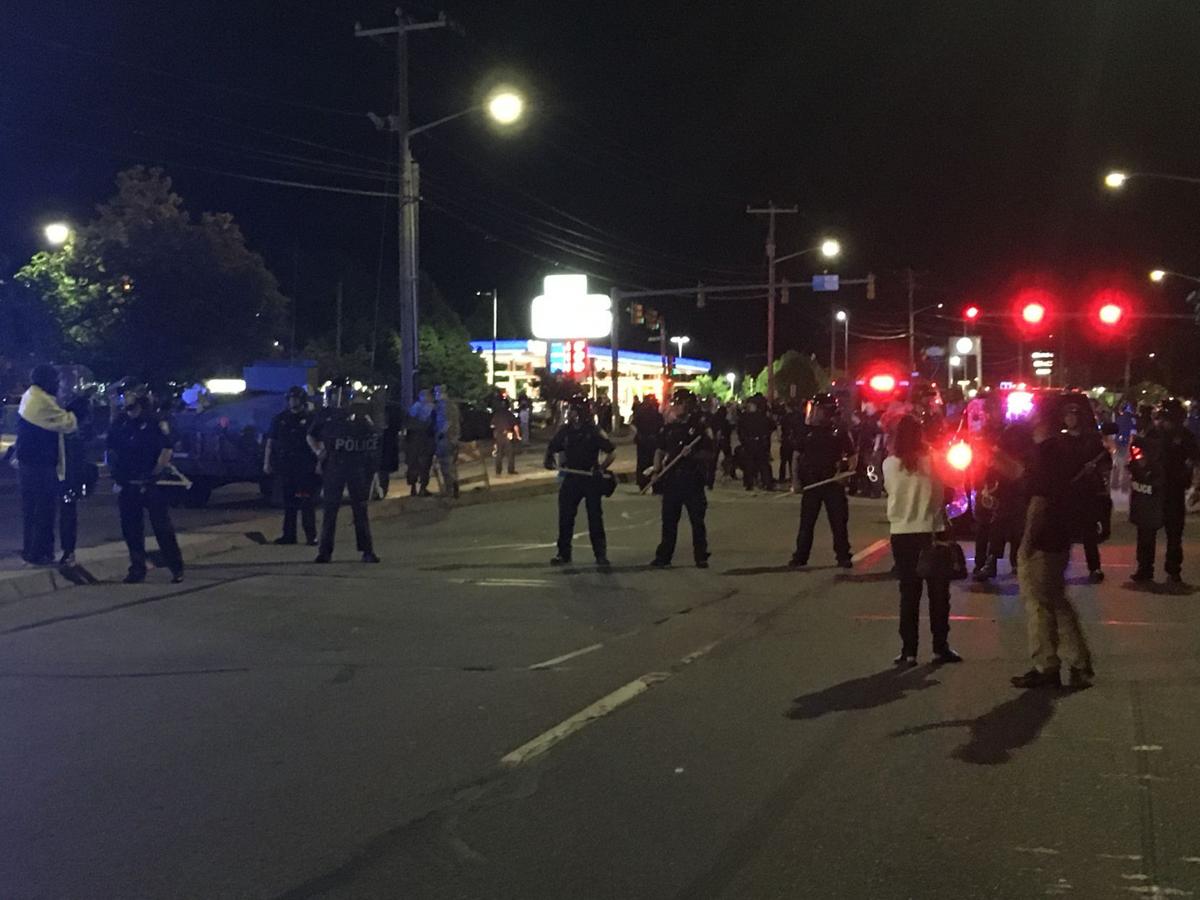 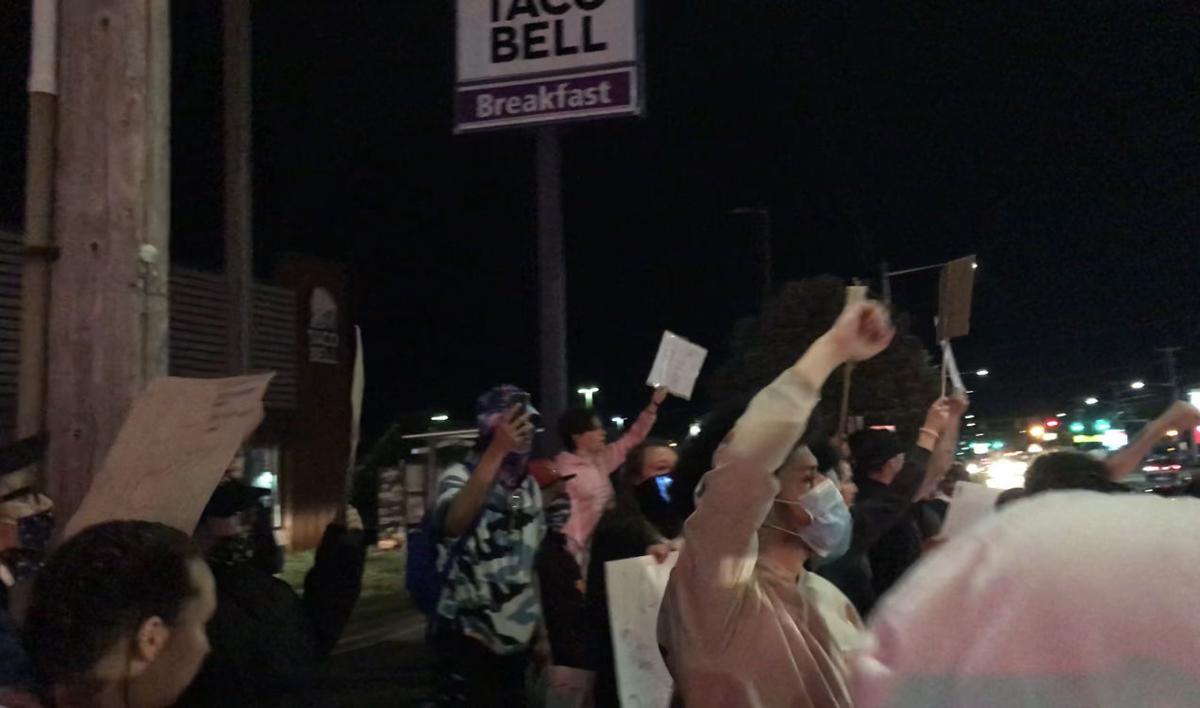 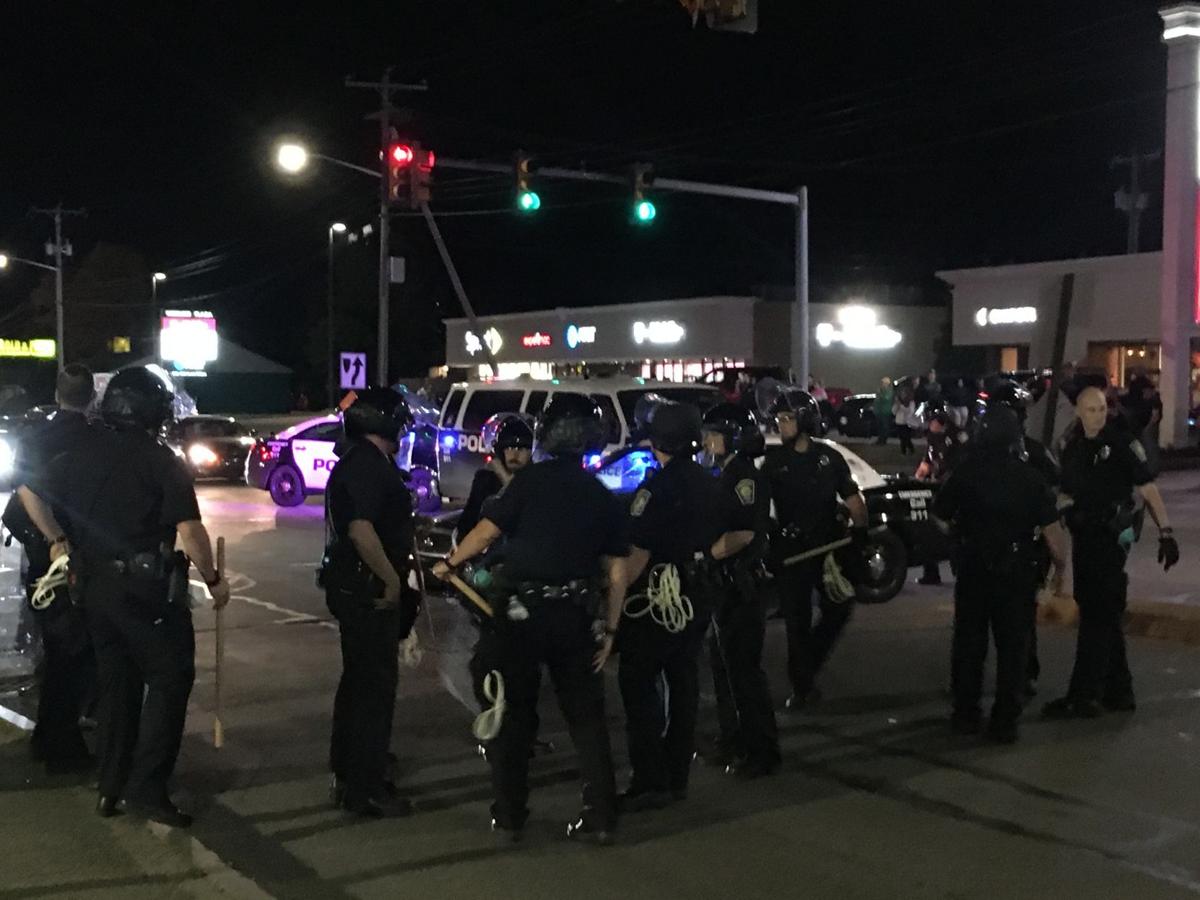 After a peaceful vigil earlier Tuesday evening in Stark Park, about 100 young protesters stood at the intersection of South Willow Street and Weston Road chanting "Black Lives Matter," and yelling as passing cars revved their engines and honked.

Cars began streaming into the T.J. Maxx parking lot, as word of the protest spread on social media. Several men were seen exiting vehicles wearing masks and carrying what appeared to be long guns, then running towards the group, while others walked through the lot yelling, "I can't breathe."

By 11 p.m., dozens of Manchester police in riot gear and National Guard troops arrived on scene, standing across So. Willow St. in a straight formation and shutting down traffic.

A handful of protesters walked slowly toward police on South Willow, with their hands raised. Someone threw a glass bottle over their heads, which shattered between protesters and police. The line of protesters fell back immediately. Police brandishing Tazers pushed some protesters off South Willow Street into a nearby parking lot. Protesters urged each other to back up.

Police then donned masks and picked up batons.

Police played an automated message urging the group to disperse, before they used an audible tone designed to make all "physically uncomfortable."

By 11:30 p.m., the group remained outside Chipotle, screaming at officers and National Guard members.

Manchester police confirmed some arrests had been made. No businesses were visibly damaged.

Earlier in the night, Elm Street was shut down at Auburn Street as protesters gathered there following the vigil.

In a tweet shortly after midnight, Manchester police said they shut off ramps to Interstate 293 at one point to control a group of South Willow Street protesters.

A half hour later, police tweeeted that they were starting to move protesters and some of the crowd was dispersing. Multiple arrests had been made, they said.

By 1:36 a.m., they reported that the crowd had dispersed and a couple of dumpster fires had been extinguished by the Manchester Fire Department.

Police initially ignored the protesters and left the intersection, but returned shortly after some of the protesters started setting off small fireworks around 10:45 p.m.

National Guard to be on standby in Manchester; man accused of encouraging riot

'It's everyone versus racism' Hampton demonstrators say

HAMPTON — When the crowd at a rally seeking change after the death of George Floyd took a knee and called on police to join them, Seabrook Dep…

CONWAY — About 200 people gathered peacefully Sunday afternoon to protest the deaths of African Americans in police custody, as well as the re…

A Manchester demonstration turned tense Saturday afternoon after a man drew a gun in a confrontation with protesters, police and witnesses sai…

MANCHESTER - A woman watching television in her living room Thursday night narrowly escaped being seriously injured when a car crashed through a wall and into her Manchester home “inches” away from her, police said.

MILTON - A motorcyclist was killed on the Spaulding Turnpike in Milton Thursday in a crash involving a box truck, state police said.

A 59-year-old man was killed Wednesday night when he was hit by a car in Rochester.

Amid booming fireworks sales, one national chain with three New Hampshire stores has been ordered to stop advertising in Massachusetts — a state where fireworks are banned.