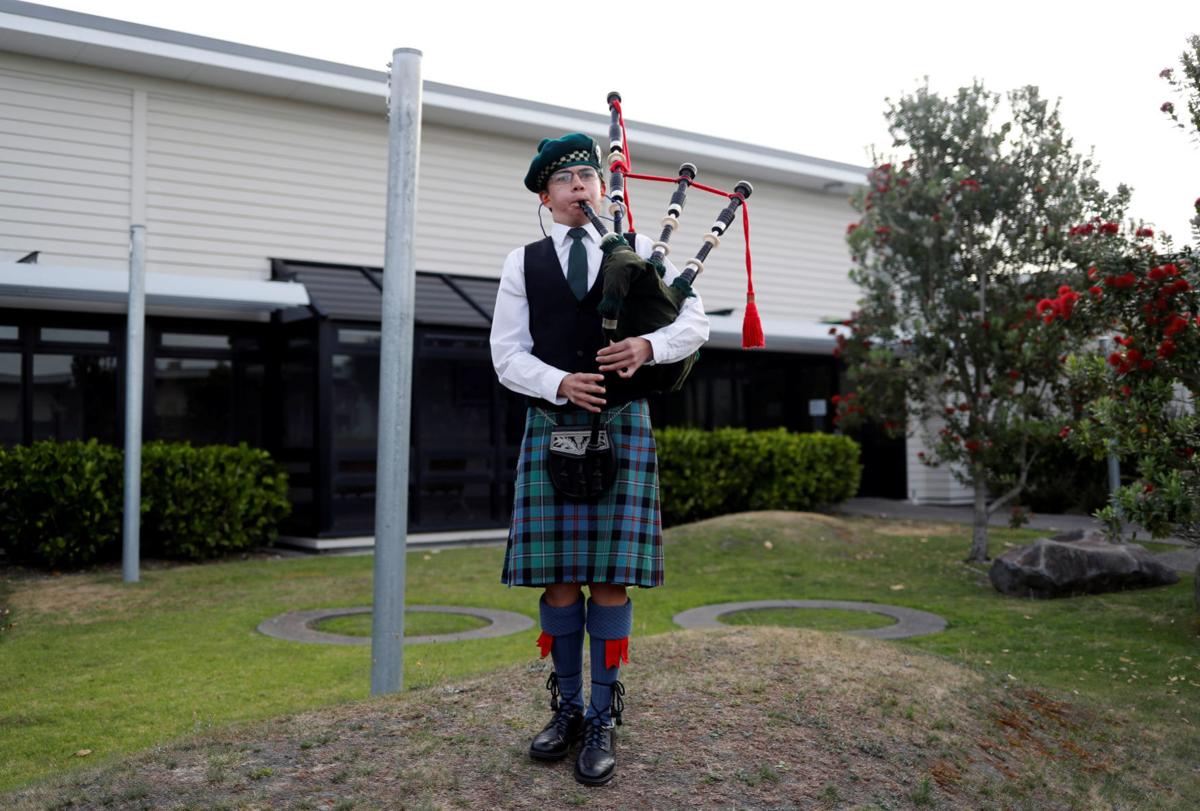 A boy plays bagpipes after a minute of silence for the victims of the White Island volcano eruption, at the hospital in Whakatane, New Zealand, on Monday. 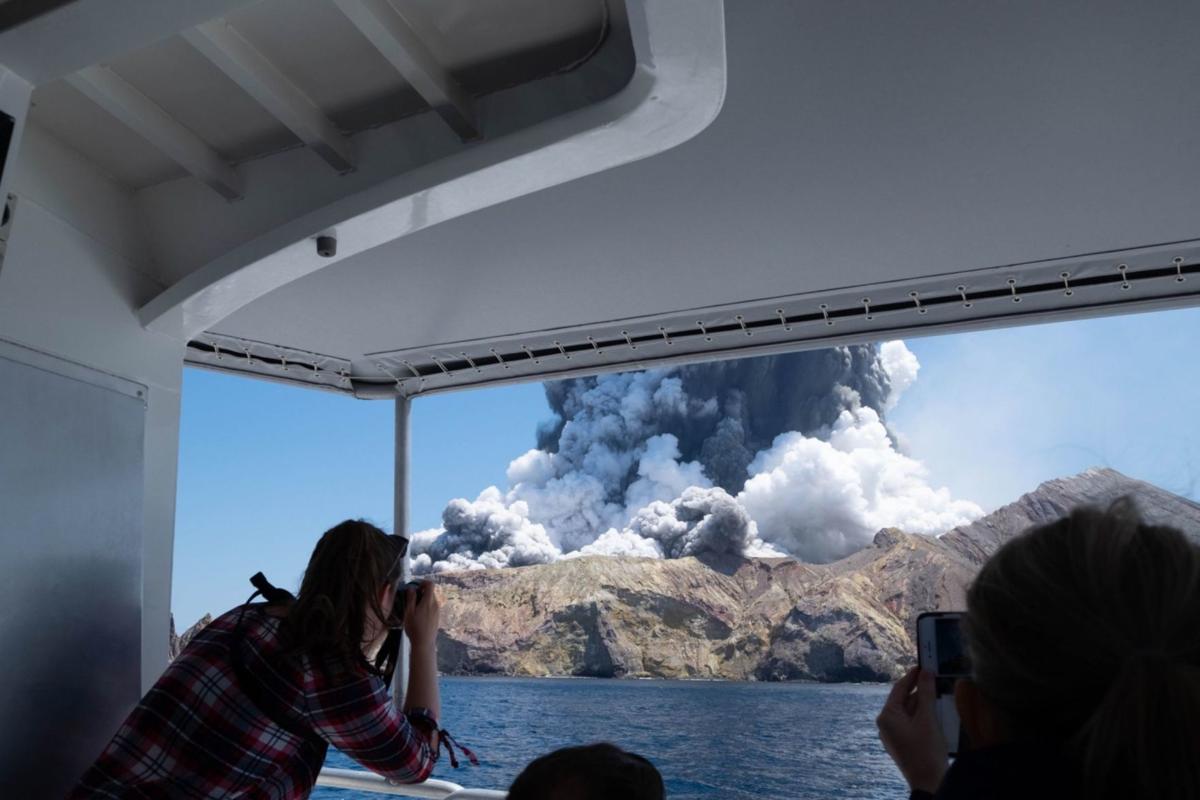 Tourists on a boat take photographs of the White Island volcano in New Zealand as it erupts.

A boy plays bagpipes after a minute of silence for the victims of the White Island volcano eruption, at the hospital in Whakatane, New Zealand, on Monday.

Tourists on a boat take photographs of the White Island volcano in New Zealand as it erupts.

A sixth person is confirmed dead as rescue efforts have given way to a grim recovery operation two days after a volcano erupted at a popular tourism site in New Zealand. Monday’s blast left 30 injured and eight missing and presumed dead. Burn units at local hospitals have been pushed to capacity and calls are emerging investigate the safety of tourism at New Zealand’s most active volcano.

New Zealand Police confirmed Tuesday that an injured victim taken from White Island, also known by its Maori name Whakaari, died at a hospital in suburban Auckland that night, bringing the death toll to six, the Australian reports. Officials warned Tuesday night that positively identifying the deceased could take time owing to the “severe” nature of the injuries suffered.

Mark Law, a commercial helicopter pilot who has led tours to the island for a decade told the Guardian he and other pilots rescued 12 victims immediately after the eruption, concerned that no one else would come for them. Law described seeing people “dead, dying and alive, but in various states of consciousness.”

“The burns were horrific,” Law said. “A lot of the people could not talk. It was pretty quiet. The only real words were things like, ‘help.’ They were covered in ash and dust. We were picking them up, and skin was coming off in our hands.”

His fellow pilot, Tom Storey, described the acidic dust in the air and blanketing the ground as like “running through talcum powder.”

Others tried to rescue survivors using boats. Michael Schade, a U.S.-based engineer, chronicled the aftermath in a series of photos and videos posted to Twitter and later distributed by European press agencies.

Schade wrote that his family had left the island only 20 minutes before the eruption: “[We] were waiting at our boat about to leave when we saw it.

“Boat ride home tending to people our boat rescued was indescribable,” Schade wrote. “Woman my mom tended to was in critical condition but seemed strong by the end. The helicopters on the island looked destroyed.”

“The scale of this tragedy is devastating,” New Zealand Prime Minister Jacinda Ardern said during an address to Parliament Tuesday where she thanked helicopter crews who landed on the island to rescue survivors. “Police and defense force personnel have taken a number of aerial reconnaissance flights over the island since the eruption. However, no signs of life have been detected.”

Police now believe that 47 visitors were on the island when it erupted at 2:11 p.m. local time Monday and launched thick clouds of ash 12,000 feet into the air leaving some survivors with severe burns. Half of the visitors are Australian, while nine of them are Americans, police said; other visitors on the island were from New Zealand, China, Germany, Malaysia and the United Kingdom. Several of the visitors were passengers from a Royal Caribbean cruise ship, Ovation of the Seas, in port at Tauranga, a coastal town about 55 miles from White Island.

The survivors range in age from 13 to 72, according to New Zealand’s chief medical officer, Pete Watson. Doctors from New Zealand’s four hospitals with burn units described to the Guardian an array of injuries, including severe external burns from hot gas, ash and debris, to inhalation burns from the sulfur dioxide, methane and other gases spewed during the eruption.

Australian patients will reportedly transferred to their home country once made stable in order to free up resources. One doctor told the Guardian that transferring other patients internationally would be risky, especially given the lung issues some victims are suffering.

Windy conditions on the island, and the fact that minor volcanic eruption activity is still taking place, have slowed recovery and analysis efforts even as scientists forecast that the most violent eruption has passed for now. Police said they plan to fly drones carrying equipment to test gas levels, though crews were kept off the Island on Tuesday.

GeoNet, which monitors geological hazards in New Zealand, placed the volcano alert level at a three out of a five-point scale during the eruption; it remained at that level Tuesday. A week before the incident and leading up to the eruption, the alert level was at a two.

“Moderate volcanic unrest continues at Whakaari/White Island, with substantial gas, steam and mud bursts observed at the vent located at the back of the crater lake. Other monitoring parameters remain elevated and the Volcanic Alert Level stays at Level 2,” a Dec. 3 bulletin read.

But signs of unrest in the days before the volcano eruption have led to questions as to why tourists were able to access the uninhabited island whose bursts of “explosive gas and steam-driven mud jetting” from the volcano’s vent, according to GeoNet, had been intensifying in recent weeks.

Barbara Barham didn’t initially foresee trouble when her newlywed daughter, Lauren Urey, 32, called from her honeymoon aboard the Royal Caribbean ship to say she and her husband Matthew planned to visit White Island. Barham later learned her son-in-law had left his own mother a distressed voice mail saying the volcano had erupted and he was so badly burned, he struggled to use the phone.

Barham told The Washington Post she was “livid” upon hearing reports of the volcano had been active in the days before her family’s excursion. Her daughter and son-in-law remain hospitalized with severe burns.

Although White Island last had a “short-lived eruption” in April 2016 and spewed ash from a vent five months later, Monday’s eruption was surprising but not unique, according to scientist Ken Gledhill of GeoNet.

“In the scheme of things, for volcanic eruptions, it is not large,” he told The Associated Press. “But if you were close to that, it is not good.”

Tour operators make the ultimate decision whether to take visitors to the privately owned island, where access is controlled through permits, the New Zealand Herald reported.

Prime Minister Arden acknowledged in her remarks to Parliament on Tuesday that “there will be bigger questions in relation to this event” but did not detail who or what entities investigators may scrutinize.

New Zealand police later Tuesday backed off a previous statement that the deaths and injuries would be investigated as a criminal matter.

“It is too early to confirm whether there will also be a criminal investigation,” police said in an updated statement. Police, working on behalf of the coroner, would investigate in coordinating with WorkSafe New Zealand, which regulates workplace health and safety conditions in the island nation.

“WorkSafe New Zealand has opened a health and safety investigation into the harm and loss of life caused by the eruption,” the agency said in a statement via Twitter Tuesday. “As the workplace health and safety regulator and administrator of the Adventure Activities Regulations, WorkSafe will be investigating and considering all of the relevant work health and safety issues surrounding this tragic event.”

Royal Caribbean Cruises said in a statement that the company is “devastated” and said it was providing medical resources and counseling to passengers and their families.

The cruise line sent staff from the ship and its Sydney and Auckland offices to help family members. Ovation of the Seas will remain in port in Tauranga until further notice, the company said.

Passengers aboard the cruise ship described a “shaky” captain addressing guests from the bridge, telling them that crew and passengers were on the island.

“When he made that first announcement, for a ship with over 6,000 people, you could hear a pin drop,” passenger Steve Shapirl told the New Zealand Herald Wednesday.

CONCORD — Two maintenance workers at St. Paul’s School managed to escape injury after their utility vehicle went through the ice on a school pond Friday afternoon.

Organizers of a Virginia gun rally urged thousands of people to attend this Monday’s event protesting Democrats’ push to stiffen the state’s gun laws after its top court upheld the governor’s emergency ban on weapons at the rally grounds.