Troy Police Chief David Ellis is shown in a photo he posted on social media. 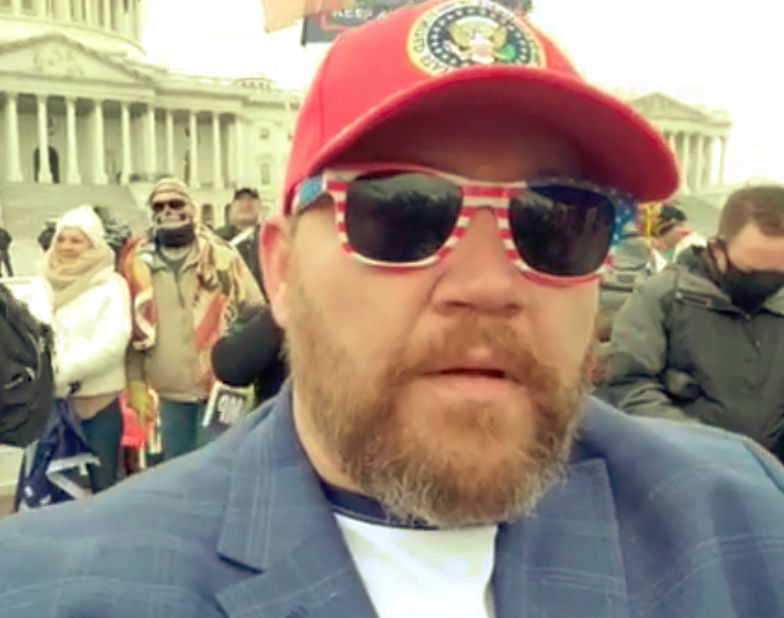 Former GOP Sullivan County Commission candidate Jeremy Herrell said he is proud of the people who stormed the U.S. Capitol on Wednesday.

Troy Police Chief David Ellis is shown in a photo he posted on social media.

Former GOP Sullivan County Commission candidate Jeremy Herrell said he is proud of the people who stormed the U.S. Capitol on Wednesday.

Troy Police Chief David Ellis, who was among the Granite Staters at Wednesday’s political rally-turned-riot at the U.S. Capitol, condemned the mob violence.

Ellis was quoted in New York Magazine coverage as one of the few attendees of President Donald Trump’s rally who was critical of the attack on the Capitol building.

Ellis told the magazine he was troubled by the violence against police and said it is not representative of the pro-Trump movement.

“There’s a lot of Trump supporters that are awesome people,” he told New York Magazine. “Like me.”

Ellis could not be reached for comment via phone or Facebook messenger on Thursday. Troy Police Cpl. Jeffrey Macek said Ellis is in quarantine because he traveled out of state.

“I like Dave, and I know he’s a good man,” Troy Selectboard Chairman Richard Thackston said Thursday. “I’m sure he went down there in good faith.”

Pat Sullivan, executive director of the New Hampshire Association of Chiefs of Police, said Ellis was within his rights to attend the Trump rally.

“For him to go down there for a quote, protest or demonstration, unquote, is his absolute constitutional right,” Sullivan said.

Sullivan said that what happened after the rally — in which Trump repeated his false claims that the election was stolen and some protesters joined a mob invading the Capitol — was not right.

“For a police chief to attend a rally that led to such destruction and violence and express no regret is simply unimaginable,” Buckley said.

Ellis was not the only New Hampshire resident in Washington on Wednesday.

Tom Monahan, who told a Canadian reporter he is from New Hampshire, said he got caught in a crowd rushing toward police and was pepper-sprayed in the face.

“I was just trying to get a better look, be a part of history,” Monahan told a reporter with insauga.com.

“My mother and I went up the stairs, and we ended up getting way too close, going way too far,” Monahan said. “Next thing I know, it’s me and a whole bunch of police using spray and flash-bangs.”

Boston TV stations reported that Thomas Gallagher of Bridgewater was one of 10 people arrested and charged with unlawful entry of the Capitol building.

Jeremy Herrell, a Claremont man who recently ran unsuccessfully for Sullivan County Commission as a Republican, attended the rally. Sometimes known as the Hip Hop Patriot, Harrell is a self-styled political pundit with an online following.

In a video he posted on social media, Harrell said he left as the situation was turning violent. While Harrell said he was disappointed that Trump did not indicate what he planned to do next, he expressed satisfaction for the actions taken by rioters, whom he called “patriots.”

“What I’m saying (is) it definitely was our side that swarmed the steps,” Harrell said in a Facebook comment. “I’m proud they did too.”

In Troy, Thackston said Ellis’ presence at the rally doesn’t disqualify him from continuing as police chief. Thackston said people of all political views can expect to be treated fairly by the chief.

“He’s been a good chief for Troy, and I think he will continue to be,” Thackston said. “People on the other side should not be worried.”

Thackston, who was once a Trump supporter, said this week’s chaos has left him feeling sick and angry. He blamed Trump for the violence.

“Any good that President Trump did in the last four years was negated in the last 72 hours, and it’s appalling,” Thackston said.

No one was injured Tuesday when a small plane went off a runway at Manchester-Boston Regional Airport, officials said.

Trail conditions were a factor, but not cause of snowmobile accident that injured conservation officer

Conservation Officer Christopher Egan, a regular figure on the “North Woods Law” reality TV show, was recovering from surgery Tuesday to repair a broken leg he sustained Monday in an on-duty snowmobile accident in Pittsburg.

WASHINGTON (Reuters) - Two members of the National Guard have been pulled from duties related to the inauguration of President-elect Joe Biden following vetting for links to extremist movements, two U.S. officials told Reuters on Tuesday.