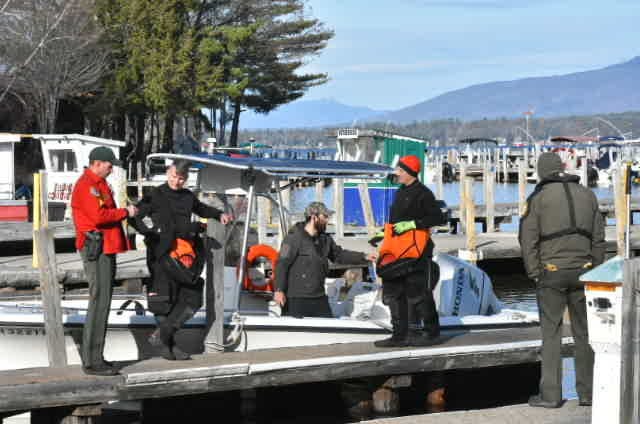 Members of the Fish and Game Department Dive Team prepare to enter Lake Winnipesaukee on Sunday. 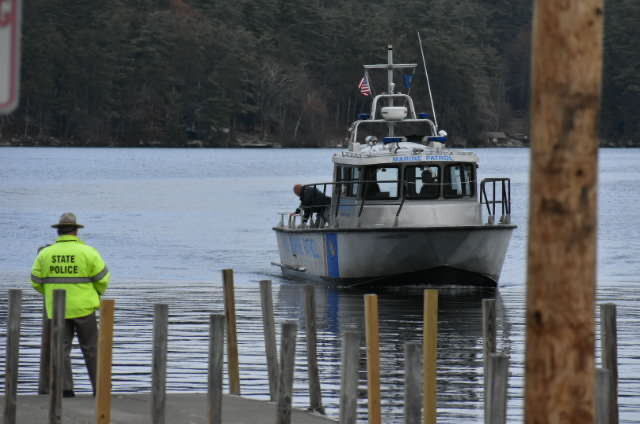 On Sunday, Marine Patrol boats ferried State Police to the area where the fatal collision is believed to have occurred on Lake Winnipesaukee.

Marine Patrol Sgt. Dave Ouellette said the victims all lived on Bear Island and knew each other.

Meredith first responders and Marine Patrol were called to the north side of the island about 6:14 p.m. Saturday for a reported boating accident. Upon arrival they found Hanson's 2011 Sea Ray Sport bowrider inboard/outboard adrift just north of the Bear Island Post Office.

His wife, Carmella S. Hanson, 75, who made the 911 call was suffering from a serious head injury, police said. She was taken to the Meredith Town Docks at Shep Brown’s Boat Basin on Lovejoy Sands Road. She was taken by ambulance to Lakes Region General Hospital, and later transferred to another medical facility.

Her husband was declared dead at the scene by a medical examiner.

But Dunleavy said the damage to the Sea Ray was not consistent with having run aground.

While investigating the cause of the accident, Marine Patrol received a report of a missing boater from Bear Island. Using sonar and other equipment, New Hampshire Fish & Game Dive Team members found a sunken Penn Yan boat with Lyon on board.

Dunleavy credited the training of his officers along with that of State Police and Fish & Game with the quick resolution to the case.

Through the initial evidence obtained at the scene and a witness account, it is believed the two vessels collided with one another on a moonlit night while underway; however Dunleavy cautioned that all facts and circumstances surrounding the incident are still under investigation.

Bear Island is the second biggest of the 262 islands that dot the state’s largest lake. It is home to St. John’s-on-the-Lake Chapel, which holds ecumenical services during the summer months.

The 3-mile-long island is home to about 200 residents. It is accessible only by boat until the lake freezes. At its closest point the island is 3/4 of a mile away from the public boat launch at Shep Brown’s Boat Basin off Meredith Neck Road.

Earlier in the day, gray Marine Patrol boats, blue lights flashing, ferried State Police out to the area where the collision is believed to have occurred. Meanwhile, fire boats bobbed nearby to warn away other boat traffic as divers prepared their equipment.

Divers were in the water briefly before returning to shore shortly after 3 p.m. and packing up their equipment. Several conservation officers were still wearing their scarlet wool jackets after being called from the woods, where they had been assigned to monitor hunters during the height of the season.

Marine Patrol is asking anyone who may have witnessed the accident or heard anything on the water in the area of Bear, Pine or Three Mile Islands, to contact Ouellette at Marine Patrol, 603-227-2111.

Men who died in power boat collision on Winnipesaukee were friends

Investigation of boat crash that killed both drivers continues underwater

MANCHESTER — Grief counselors have been called in to assist Manchester fire personnel mourning the loss of a 20-year member of the city’s fire department.

SYRACUSE, N.Y. — Syracuse police have released new details on a crash last week involving a Syracuse University trolley that took the life of a first-year student.

Minnesota Gov. Tim Walz said he has activated the Minnesota National Guard as a “precautionary step” following developments in the case of George Floyd.

The Attorney General’s Office has identified the officer in Monday’s fatal police-involved shooting in Thornton.