DURHAM — A survey released by the University of New Hampshire claims to show that an overwhelming majority of residents support sharing driver’s license photos with the Federal Bureau of Investigation for inclusion in a national facial recognition database. 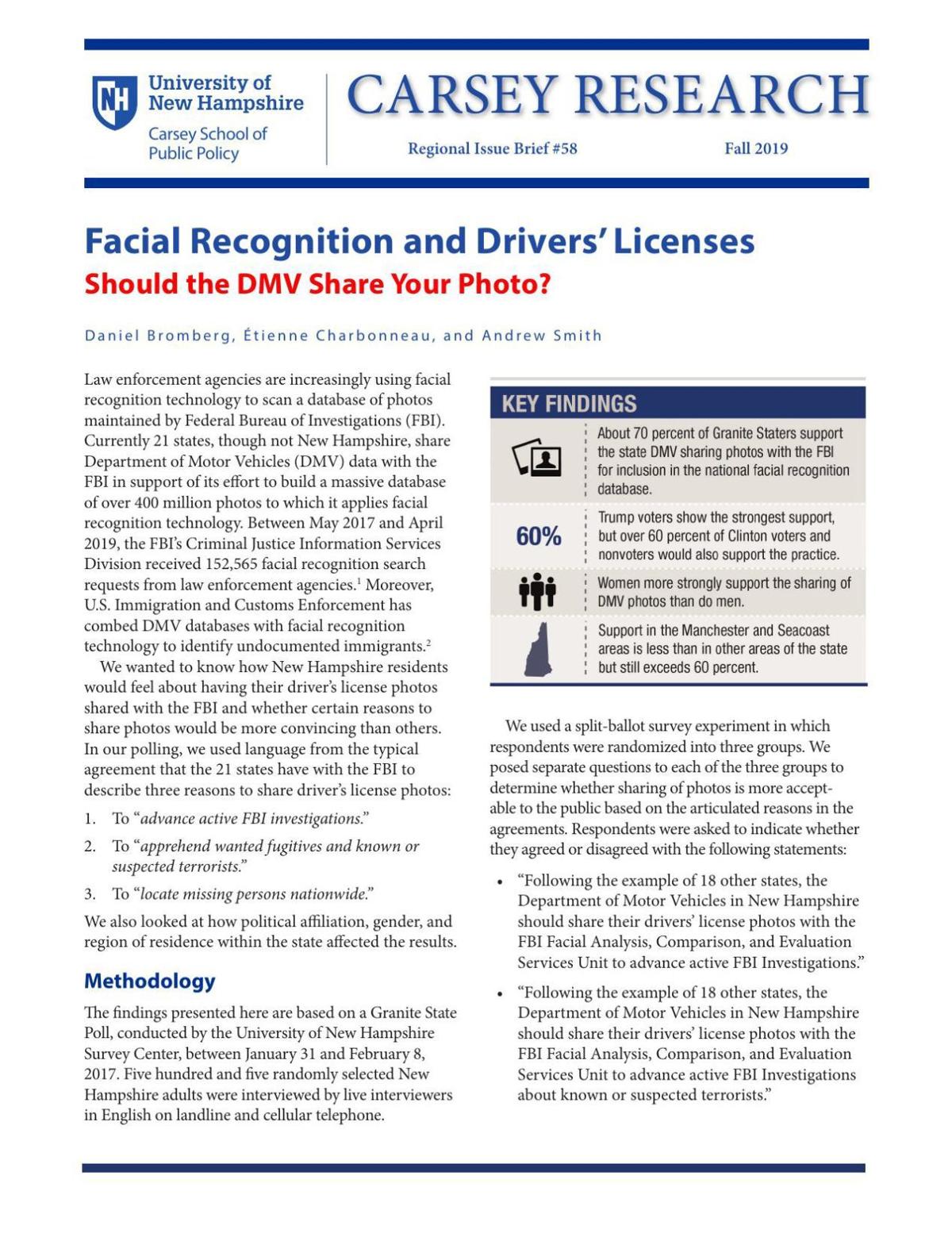 New Hampshire officials do not share Department of Motor Vehicle photos with the FBI, but 21 states do support of the agency’s efforts to build a massive database of over 400 million photos.

Dan Bromberg, associate professor of public administration and director of academic programs for the Carsey School of Public Policy, said the survey’s results were not surprising given that many people already assume federal law enforcement agencies have access to those records.

However, having about 70 percent of people support a national facial recognition program was not expected.

“We weren’t anticipating there would be overwhelming support,” Bromberg said on Tuesday.

Bromberg said the questions posed may have led to their results. For example, respondents were asked to indicate whether they agreed or disagreed with statements such as: “The Department of Motor Vehicles in New Hampshire should share their driver’s license photos with the FBI Facial Analysis, Comparison and Evaluation Services Unit to advance active FBI investigations about known or suspected terrorists.”

Bromberg said he started looking into this data because he has been focused on the subject of police body cameras and this was a natural extension of that work. His theory is that use of these advanced technologies actually increases mistrust within communities.

The findings released this week are based on a Granite State Poll conducted between Jan. 31 and Feb. 8, 2017. A total of 505 randomly selected adults were interviewed on landline and cellular telephones.

Researchers found differences in support based on voting behavior, gender and geographic location.

People who voted for President Donald Trump supported sharing driver’s license photos by 83 percent, compared to 62 percent of nonvoters and 64 percent for residents who voted for Hillary Clinton.

Women are more supportive than men when it comes to sharing driver’s license photos. The survey says women were especially convinced by the terrorism argument, with 86 percent expressing support for data sharing with the FBI in cases of investigating known or suspected terrorists.

Only 58 percent of men felt that way when confronted with the terrorism argument, the survey says.

Researchers also broke down responses based upon region, pulling data from Manchester and the Seacoast and comparing it to the rest of the state.

The survey found on average, people in Manchester and the Seacoast are less supportive of picture sharing for facial recognition by an average of about 8 percentage points. Support in those regions still exceeds 60 percent, the survey says.

Bromberg said they chose to break down the data that way because people in more urban centers are more likely to be confronted with police cameras and facial recognition technology. Manchester is rolling out police body cameras this fall.

Bromberg will continue his work by drilling into data he has collected from 4,000 citizens nationally and police chiefs around the country about how technology affects levels of trust within communities.

The survey was co-authored by Etienne Charbonneau, the Canada research chair at Ecole nationale d’administration publique in Montreal, Canada, as well as Andrew Smith, director of the UNH Survey Center and professor of political science.

Researchers at the University of New Hampshire are studying seedless table grapes with the hope of finding varieties that grow well in the state.

American culture has been projected overseas in various ways: Elvis, blue jeans, Coca-Cola, MTV, Hollywood films. Now, in a program announced Wednesday by the U.S. Department of State, this pantheon will include video games.

Amazon's livestreaming service Twitch announced Wednesday that it will enforce its conduct policy on extreme behavior that happens outside of its platform. That includes deadly violence, membership in a hate group, terrorism, threats of mass violence, nonconsensual sexual activity, exploitat…

After missing 2020 because of pandemic, UFO Festival to land in Roswell in July 2021

The town of Roswell is gearing up to be one of the first in the area to bring back destination festivals since the pandemic with its UFO Festival July 2-4.