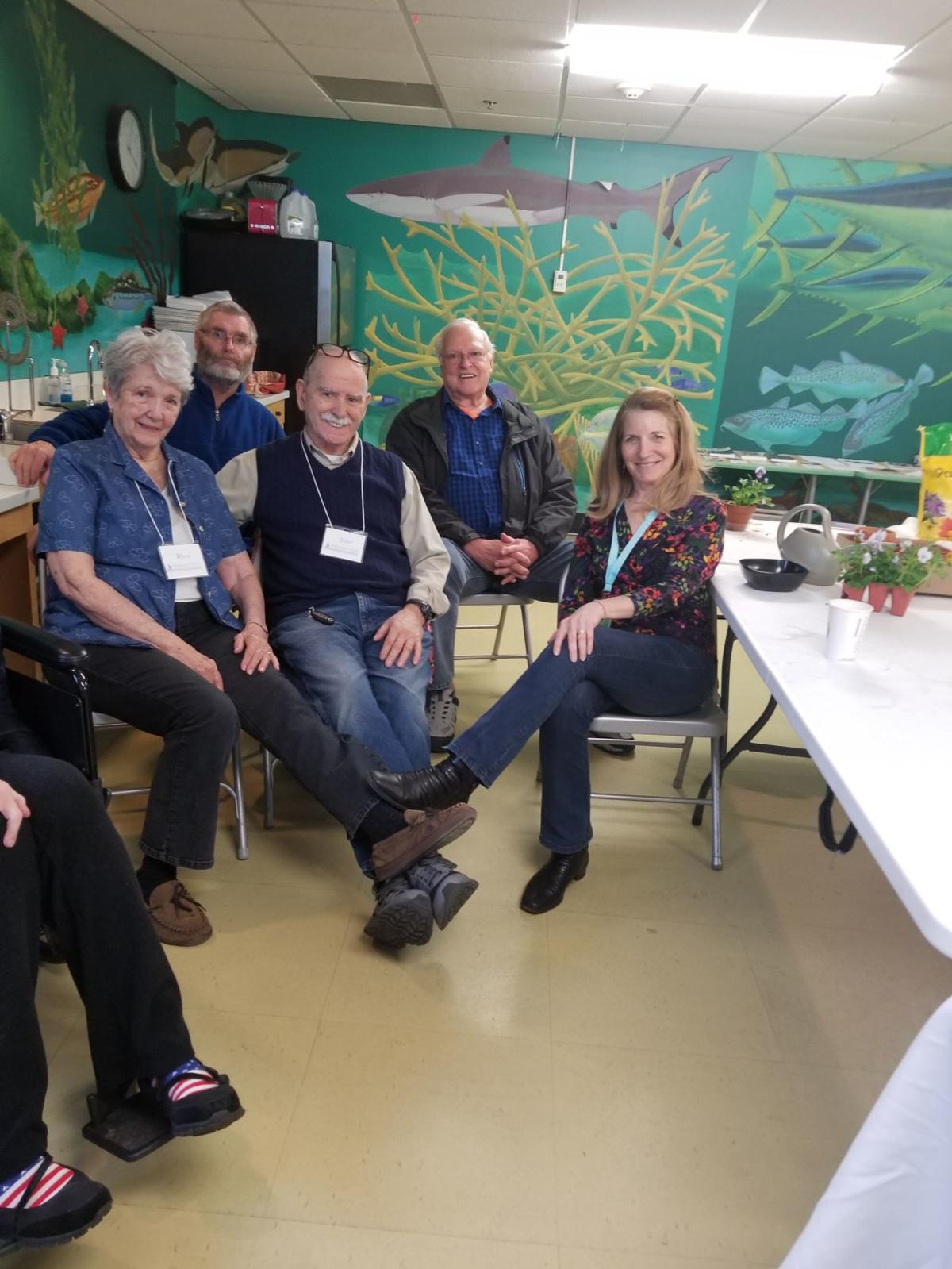 Rhea and John Pereira, Woody Sponaugle and coordinator Paula Rais meet for activities at the monthly Alzheimers Cafe at the Children’s Museum in Dover. 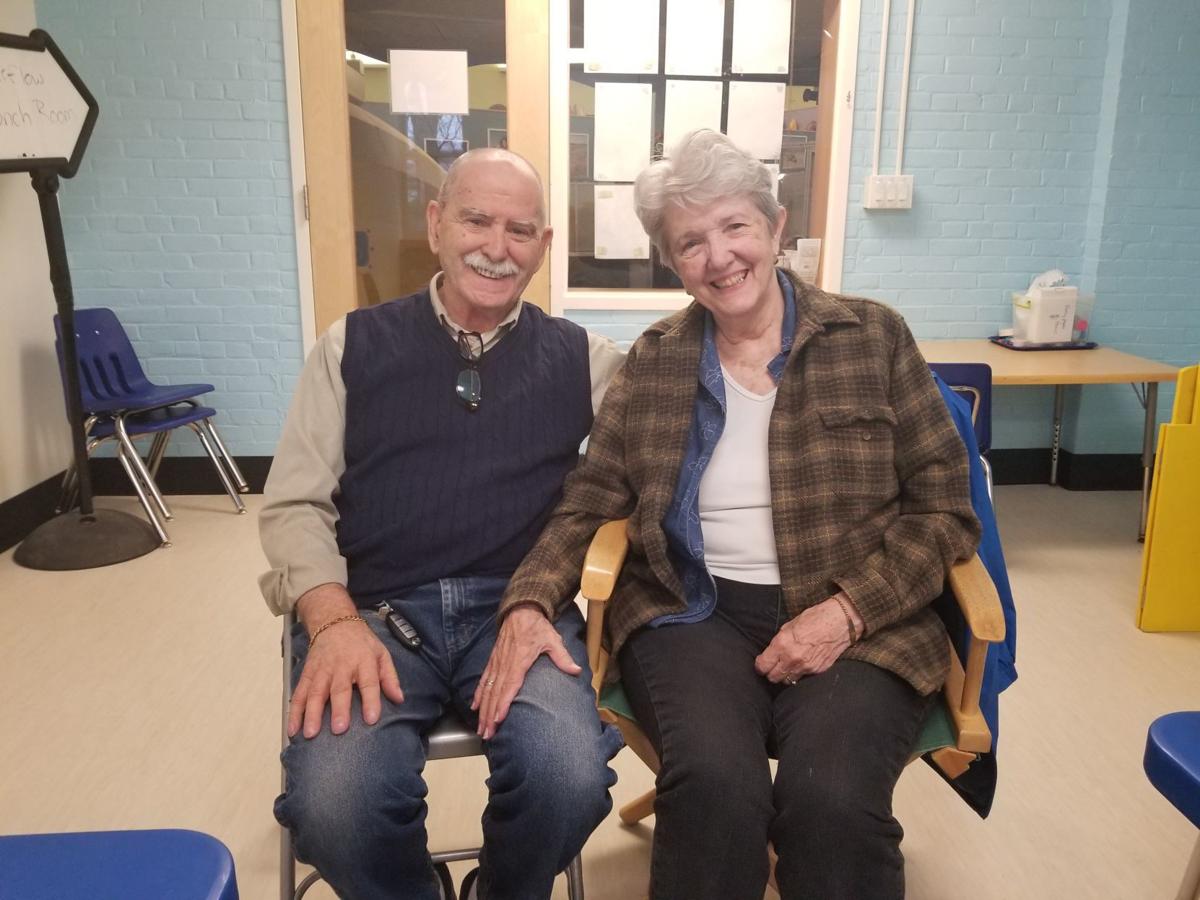 John and Rhea Pereira of Dover enjoy activities at the Alzheimers Cafe. John says caring for his wife has brought them closer. “I rejoice in it because I’m so much better as a husband. It’s almost a blessing. I didn’t think it was possible to love her even more.”

Rhea and John Pereira, Woody Sponaugle and coordinator Paula Rais meet for activities at the monthly Alzheimers Cafe at the Children’s Museum in Dover.

John and Rhea Pereira of Dover enjoy activities at the Alzheimers Cafe. John says caring for his wife has brought them closer. “I rejoice in it because I’m so much better as a husband. It’s almost a blessing. I didn’t think it was possible to love her even more.”

For most of his life, John Pereira has been surrounded by women who have taken good care of him — his mother, his aunts, three sisters, two wives — a situation others might envy.

“I was spoiled terribly. I never had to do anything on my own,” said the Dover resident, now 79.

Then 10 years ago Pereira plummeted from his comfort zone. His wife Rhea, now 82, was diagnosed with Alzhiemer’s disease, a fatal illness that affects significantly more women than men. But instead of viewing her condition as a slow and painful demise, with relentless memory and personality loss, Pereira embraced this phase of their life as a chance to enjoy being together.

“We have a wonderful life, even in her condition. We joke, we laugh, we kid around. It’s going to sound strange, but I’m actually enjoying taking care of her. I’ve become so much more aware of her needs and likes. I’m finding a part of me I didn’t know existed. Sometimes I feel sad because I didn’t find it sooner,” he said. “I could have been so much more involved in her life.”

The caregiver role Pereira views as a blessing has also required a hefty transformation — one that defies his generation’s stereotypes of who does what in a marriage, and how to spend one’s retirement days. It has also required a willingness to seek help.

“I’m in a role I’m not prepared for,” he said. “A caregiver responsible for all the little things, marketing, food prep. By the time I learn to cook anything decent I’ll be old or dead.”

It’s a sentiment echoed by others in his position. The population of male family caregivers is climbing, and already includes many age 70 and older, as well as baby boomers through millennials. Some of the reasons are cultural. Others are medically alarming.

Roughly 5.8 million Americans age 65 and older are living with Alzheimer’s, and almost two-thirds are women, according to the Alzheimer’s Association. That doesn’t include those with other debilitating illnesses that steal functionality later in life, requiring family caregivers to rise to an unfamiliar challenge, and placing an increasing onus on men.

The 2019 Study of Aging in New Hampshire found that Granite State females are more likely than males to develop multiple chronic illnesses at age 65 and beyond: nearly eight times more likely to develop osteoporosis, almost three times more likely to suffer from hypothyroidism, and more likely to suffer from brain disorders, including anxiety, depression, PTSD, psychosis, and bipolar and personality disorders. New Hampshire women also experience higher rates of chronic pain and fatigue, fall-related injuries, asthma, migraines and chronic obstructive pulmonary disorder. They still live on average two years longer than men, but they’re often sicker and need more care — and are more willing to get help, according to the results.

At this point, roughly 40 percent of family caregivers are male, according to research by AARP — and that percentage is destined to creep upward as demographic and cultural shifts require men to step into traditional roles, at the same time fewer non-working women are available to fill the need. For many in the baby boom and earlier generations, the switch requires a late-in-life overhaul, and retirement years devoted to caring and household chores instead of hobbies, community volunteering, or second-act careers.

“By the time you’re 65 or 70, you’ll either have dementia or be caring for someone with dementia,” said Woody Sponaugle of Rye, who looks after his wife in the late stages of the disease. “That portion of your life becomes totally derailed” and redefined.

“We think the man is going to be the first to go. I have four widowed friends who defy that stereotype. I think you’re going to see more men living alone and being caregivers,” said Owen Houghton of Peterborough, a retired college administrator and geriatric care manager who cared for his wife with Alzheimer’s before she moved into residential treatment three years ago.

For many, the prospect of being the primary caregiver for a loved one with an unpredictable, irreversible illness feels as comfortable as plunging off a cliff into dark water, depth unknown.

“I worried about how I was going to handle it,” said Pereira. “I didn’t know what was in me. Taking care of my wife, watching over her constantly, it’s got to be like a mother raising a child. She’s on a train to oblivion. She’s living in the moment and I’m living there with her. I’m trying to squeeze as much loving out of her as I can.”

In many ways, Pereira is a model for joy and survival — and his thankfulness and humor helps. His journey has been made more comfortable and rewarding by godsends he’s welcomed: the regular companionship of Rhea’s daughters by her first marriage, who take their mom out for fun activities and enjoy spending time with the couple; ongoing camaraderie with others in his position, through a local caregiver support group for men, founded by Sponaugle; and the monthly Alzheimer’s Café at the Children’s Museum of Dover, where patients, spouses and caregivers cluster for sharing, education and entertainment.

“I don’t know why God treats us so wonderfully,” he said. “I’m not going to turn down the gifts.’’

Rhea gives a double thumbs-up. “He’s a good house husband. He’s a keeper because he makes me laugh every day. Do you stay up at night, coming up with your one-liners?”

“I have to,” he replied. “Because you’re snoring.”

Isolation is something caregivers grapple with daily and often find crippling. Especially during the late stages of a loved one’s disease. Experts say men are more prone to hiding away, are less interested in social life than women at older ages, and can be embarrassed or uncomfortable asking for help. Some believe they should “man-up” to deal with it alone — a trait their wives might describe as “stubborn self-reliance.” According to studies by AARP, 37 percent of male caregivers don’t let their employers know they’re juggling caregiving duties at home.

But independence in these circumstances comes at a heavy cost. Research cited by aging experts indicates that roughly 72 percent of solo family caregivers age 65 and older die before their spouses succumb to their terminal, incapacitating illnesses, especially Alzheimer’s and other dementias, because of the toll that stress and physical and emotional burnout take on their health and longevity.

“You can’t leave people alone, and that means you can’t be alone. You have no one to talk to,” unless you seek ways to spend time with others, said Sponaugle, who started the country’s sixth caregiver support group for men after his wife was diagnosed with Alzheiemer’s in 2001. Eighteen years later, she is incontinent and needs his help dressing, walking, and having her needs understood.

For Sponaugle, a self-described professional “change manager,” who turned around troubled companies and was used to telling others what to do, caring for his life partner was foreign turf. “You never know what is going to happen next. Every time you think you understand, things change as the person’s condition deteriorates.” This requires stepped-up vigilance, a greater reliance on intuition and visual cues, and an ability to constantly react and adapt. “You have to try to interpret how the person is feeling because they can’t articulate. You get mixed signals if you get any at all.” It’s best to read about the condition and plan as much as possible early on.

Patience is the number one virtue to cultivate, said Houghton, who learned household chores and caregiving in his three years as a stay-at-home dad. Still, “there’s a frustration about having to do it all.”

Houghton currently runs a support group for caregivers in the Monadnock region, which offers an outlet for sharing experiences. The meetings often start with the question: “How are things for you today?”

“Initially the men have trouble talking about it. But as they see more people doing it, they open up.” One issue leads to another, and triggers advice and resources, whether for long term care planning or ways to deal with sibling rivalry and dysfunctional family dynamics that wear down family caregivers. “Every situation is different,” Houghton said. “It can feel a little like pioneering.”

“It’s very important to be with folks who are like-minded and going through the same trials and tribulations” of caregiving, said Chris Selmer, a nurse and director of the Monadnock Adult Care Center in Peterborough. “Just to have a forum where they’re not judged and can just talk.”

Silver Linings: Senior Healthy Living Expo is May 11 in Plymouth

On Saturday, May 11, the New Hampshire Union Leader will present the Silver Linings: Senior Healthy Living Expo at the Common Man Inn in Plymo…

The care you want starts with tough questions

With the absence of large, family gatherings in the last year, many people have likely been missing out on a critical conversation. And it’s a conversation that should not be delayed.

Risks of falling increase as we age - exercise, prevention are key

What is the most common trauma seen in the emergency department? Not motor vehicle accidents. Not sports injuries. It is falls!

Most of New Hampshire, like the rest of the world, has been staying home since the start of the pandemic more than a year ago. This means many people have missed regular doctors’ appointments and screenings, and maybe developed some unhealthy habits. For our senior population, now that we ha…

Genealogy: Elders 'put the flesh on the bones' of their history

Genealogy: Elders 'put the flesh on the bones' of their history