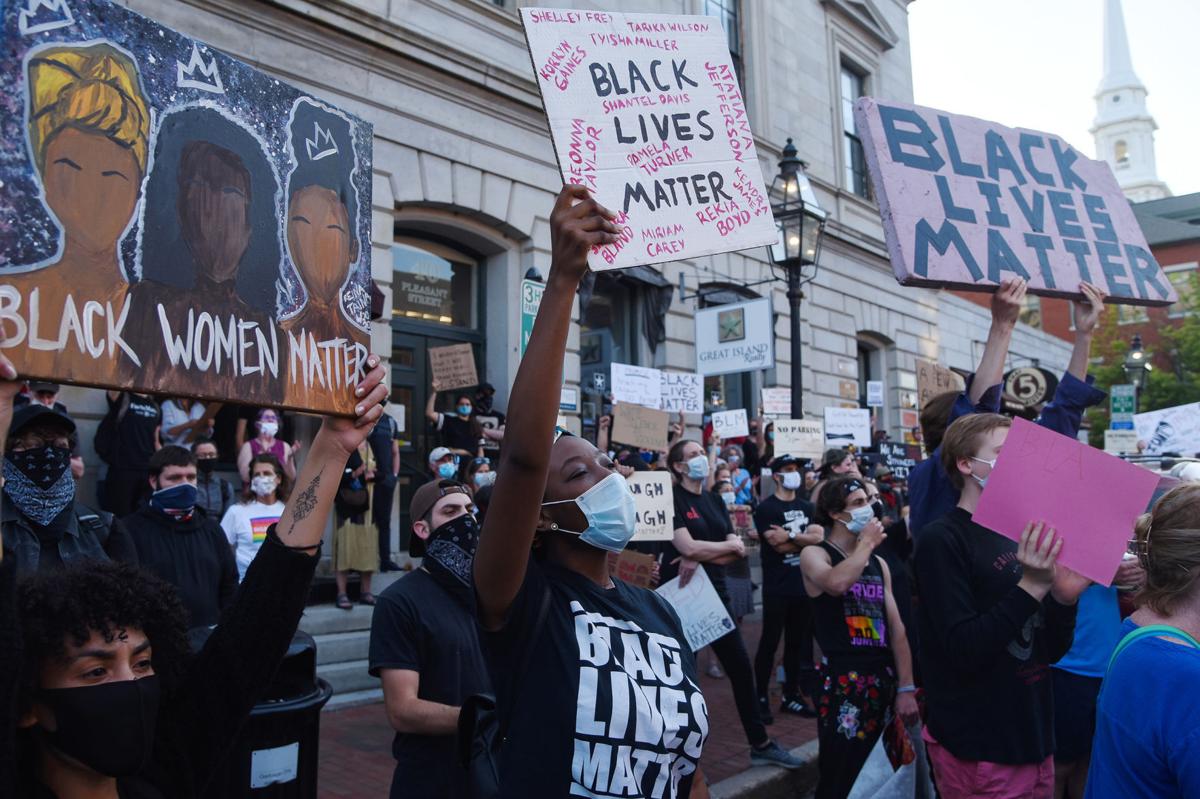 Ronelle Tshiela, center, from Manchester, holds her sign during a Black Lives Matter Vigil held at Market Square in Portsmouth on Thursday. 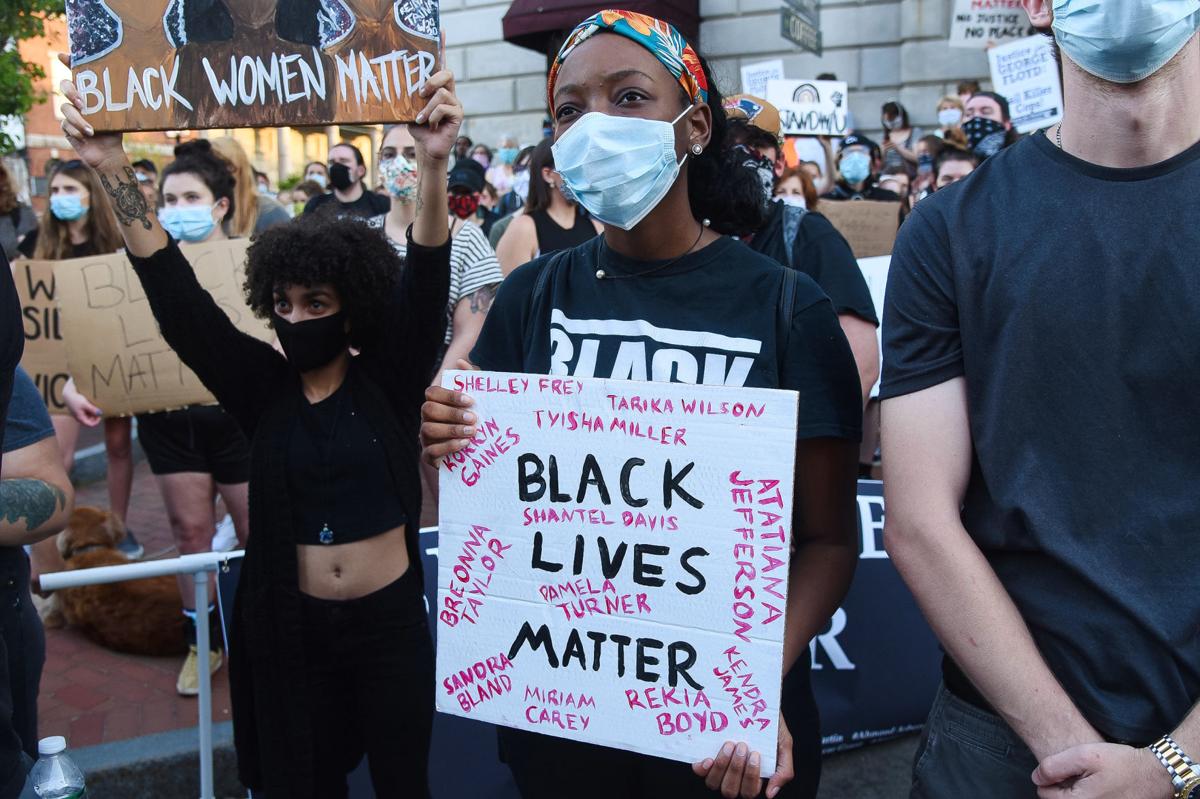 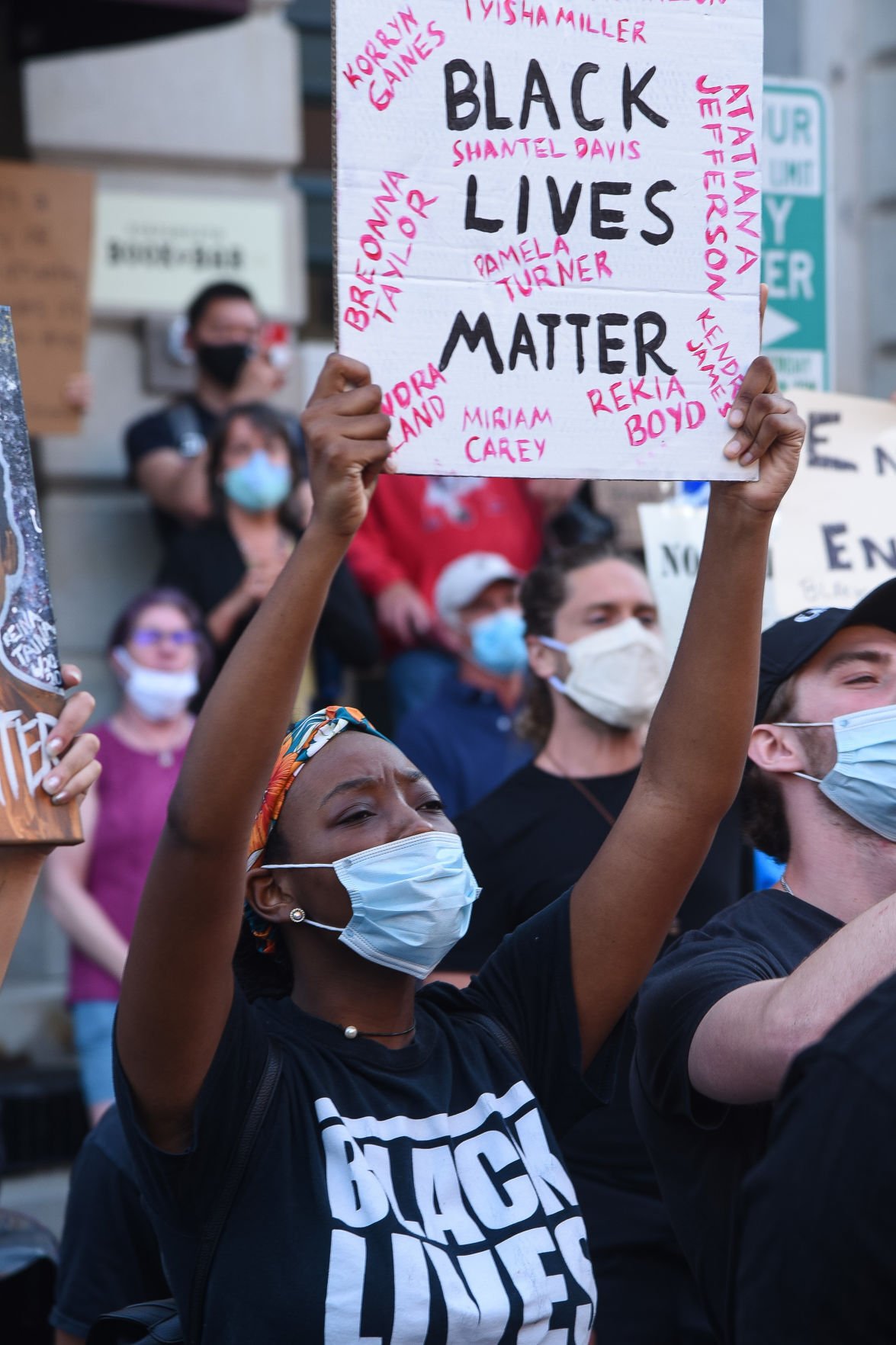 Ronelle Tshiela of Manchester holds a sign during a Black Lives Matter vigil held at Market Square in Portsmouth on Thursday.

Ronelle Tshiela, center, from Manchester, holds her sign during a Black Lives Matter Vigil held at Market Square in Portsmouth on Thursday.

Ronelle Tshiela of Manchester holds a sign during a Black Lives Matter vigil held at Market Square in Portsmouth on Thursday.

Their manifestations include police who become defensive when they enter minority neighborhoods, school leaders who chalk up racist remarks as learning experiences, and neighborhoods where poverty cycles and recycles.

Such racism exists not just in Minneapolis and other large cities, but in Manchester and New Hampshire, the activists said.

“I feel like the people in Manchester don’t really know what racism is. They do it so much they don’t even realize it,” said Elijah Kendrick, 24, a former Manchester resident, an emergency room technician and activist in Black Lives Matter Manchester.

“Here in New Hampshire a lot of us deal with racism in our communities, our schools, our jobs,” said Ronelle Tshiela, 20, of Manchester, a University of New Hampshire student and BLM leader.

They spoke with a reporter during a week of peaceful vigils punctuated by periods of unrest and confrontation in New Hampshire after the May 25 killing of George Floyd at the hands of Minneapolis police.

Both Tshiela and Kendrick moved to Manchester in their pre-teen years and went through the city’s middle and high schools. Both recounted incidents of racism that stick with them years later.

Kendrick said an umpire once asked him, the only black teenager on a Babe Ruth baseball team, if he was carrying a knife.

“Was I surprised? No. My parents taught me at a very young age I was going to be around racism until the day I die,” he said.

In the city, state

“Racism exists in our world, our country, our state, and in our city, and it’s a systemic problem that I will continue to address,” Craig said. Her office said she was busy and not available for an interview.

“I believe our diversity is one of our city’s greatest strengths, and it is my goal to ensure all residents feel welcomed, respected and accepted,” Craig wrote.

Craig said city leaders need to listen to the community, talk about racism and evaluate ill-conceived policies that disenfranchise and discriminate against minorities.

Benjamin Vihstadt, a spokesman for Gov. Chris Sununu, replied to an email sent to the governor asking about racism in New Hampshire.

“He believes elements of racial inequality exist not only in New Hampshire, but across the entire country,” Vihstadt wrote. The Republican governor’s track record on race includes a civil rights unit in the state Justice Department and a COVID-19 Equity Response Team, Vihstadt said.

According to the latest census data, New Hampshire is 90% white, though approximately one of every four residents in the state’s two largest cities is a minority.

That ratio will likely grow in the future. Schools in Manchester and Nashua count minority populations of about 44%.

Tshiela said racism exists in Manchester city schools. Students who attend heavily minority elementary schools such as Beech Street and Wilson are at a disadvantage compared with students at schools such as Green Acres.

In high school, minorities are not encouraged to participate in honors or Advanced Placement classes, she said.

As a freshman at Memorial High School, Tshiela listened to a white student tell her blacks deserve to be discriminated against because a large majority are on welfare and are criminals.

“I will never forget those words. I remember being so angry and so hurt,” Tshiela said. Now she channels them for inspiration in her activism and university studies.

In 2016, shortly after the presidential election, someone scrawled the words “Enslave all blacks” and “white power” on a wall in the Memorial girls’ bathroom, she said.

She said school leaders tried to address issues of racism, but they failed.

“Students have to be held accountable. It can’t be just a conversation,” she said. Perpetrators who get away with taunts feel emboldened to do it again, she said.

“I’ve had (honors level) teachers look at me and ask if I was in the right class,” said Kendrick, who attended all three of Manchester’s public high schools.

He said Memorial, which had a small minority population, was the worst of the three. Students asked whether he was offended when they used the N-word.

At Central, which has a larger minority population, he was valued only as an athlete, he said. “Our voices outside of sports aren’t being heard,” he said.

In a statement, Manchester school Superintendent John Goldhardt said overt, intentional acts of racism have no place in schools.

“We also understand that we cannot allow lowered expectations to stunt the intellectual growth of any of our learners,” Goldhardt said. He said he is committed to increasing the standards of rigor, levels of mastery and graduation requirements for all students.

He also wants to dramatically increase the number of minorities and impoverished students in Advanced Placement and dual enrollment courses.

Tshiela and Kendrick said they want Manchester schools to offer an ethnic studies class that would showcase historical black accomplishments and leaders.

As part of his job, Lett pushes for schools to address issues of racism and racial disparities.

Of course racism exists in the schools, he said. “That’s true. That’s like saying the sky is blue,” he said.

But he said the schools are making progress. One example is a minority-created math literacy program at Hillside Middle School.

But changes can be hard-fought. It took two years and contentious school board meetings, but black students associated with the Granite State Organizing Project finally convinced the Manchester school board to sit a student on the board.

Lett questioned what the school board’s response would be if students with the last names of O’Shaughnessy or Davis pushed the issue.

“Do you think they would be celebrated for their work or pushed out?” Lett said.

Tshiela believes Manchester police are on edge when they go into a minority neighborhood. If a dispute involves a white and a black, they first approach the white person for information, she said.

Kendrick said a Manchester officer once laughed at him during a traffic stop when Kendrick slowly reached into his glove compartment to retrieve his registration. He said an officer tailed him for 10 minutes after he drove away from a Black Lives Matter rally last Saturday.

“At a young age, my parents had to talk to me about how to survive. The first talk wasn’t about STDs or safe sex, it was about what to do when approached by police,” he said.

Earlier this week, Manchester Police Chief Carlo Capano told the Police Commission that he had a difficult conversation with Black Lives Matter activists in front of the police station eight days ago.

“They’re tough questions. I’ll be honest with you,” Capano said. He said he exchanged telephone numbers with BLM leaders and wants to keep talking about their issues.

Tshiela said Manchester has some good police officers, but not calling out the bad ones hurts the entire department.

Both Kendrick and Tshiela want the state to make marijuana legal, citing disparities in enforcement. Two months ago the ACLU reported that New Hampshire blacks were four times as likely to be arrested for marijuana-related crimes as whites.

Lett said issues of race can’t be solved without addressing issues of poverty, including a living minimum wage and fair housing practices.

“It’s all interconnected. Our identities are tied with it,” he said.

Tshiela said poverty is a vestige of slavery and segregation. Political activism and education are the solutions to issues of race and social justice, she said.

“It all circles back,” Tsiela said. “We’re not getting a great education, and we’re also being heavily policed and thrown into jails and prisons. There you go. That’s poverty for you.”

As police departments grapple with how they can improve after George Floyd’s death and the nationwide swell of protests, some are pointing to …

WSMN in Nashua pulled the radio show of Dianna Ploss after she posted a live Facebook video showing her encounter with landscapers planting trees outside Michael Timothy’s restaurant along Main Street.

Richard Gelles, a leading scholar of domestic violence and the child-welfare system who broke with many of his colleagues - and reversed his own long-standing beliefs - when he declared that it was more important to protect children from abuse than to preserve families, died June 26 at his h…

The NFL's Washington team announced on Monday it will retire its Redskins name and logo in a decision made after sponsors stepped up pressure to scrap a name that the franchise has used since 1933 but long has been criticized as racist by Native American rights groups.

Bo Chancey, senior pastor at Manchester Christian Church, greeted his flock in person for the first time in four months with a simple declaration.

A house divided: Can we still be ‘one nation’?

A house divided: Can we still be ‘one nation’?