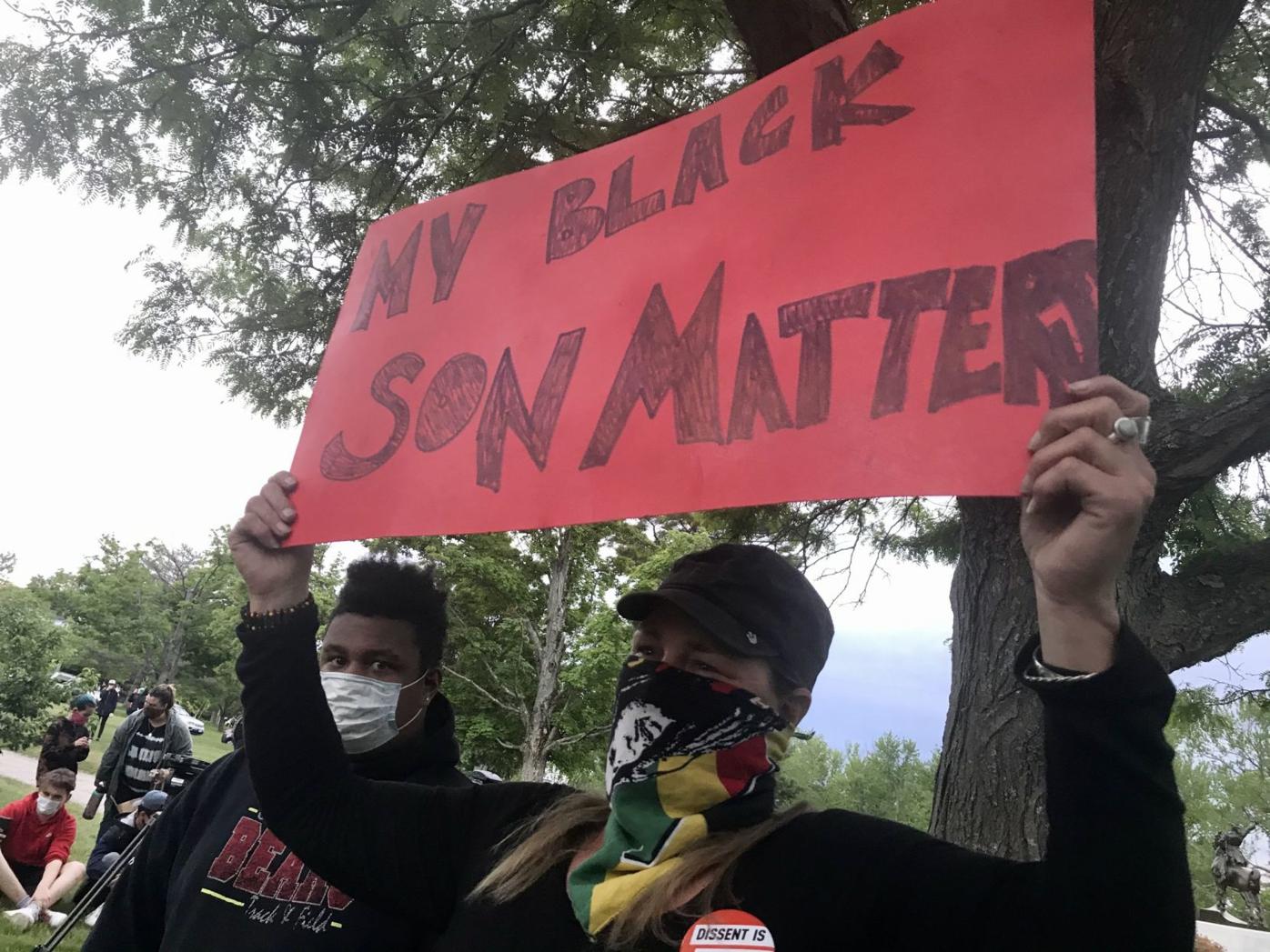 Andrea Tomlinson holds a placard with her son, Elijah Tomlinson-Burrell, 18, at Tuesday night's Black Lives Matter vigil in Manchester's Stark Park. Both are from Northwood. 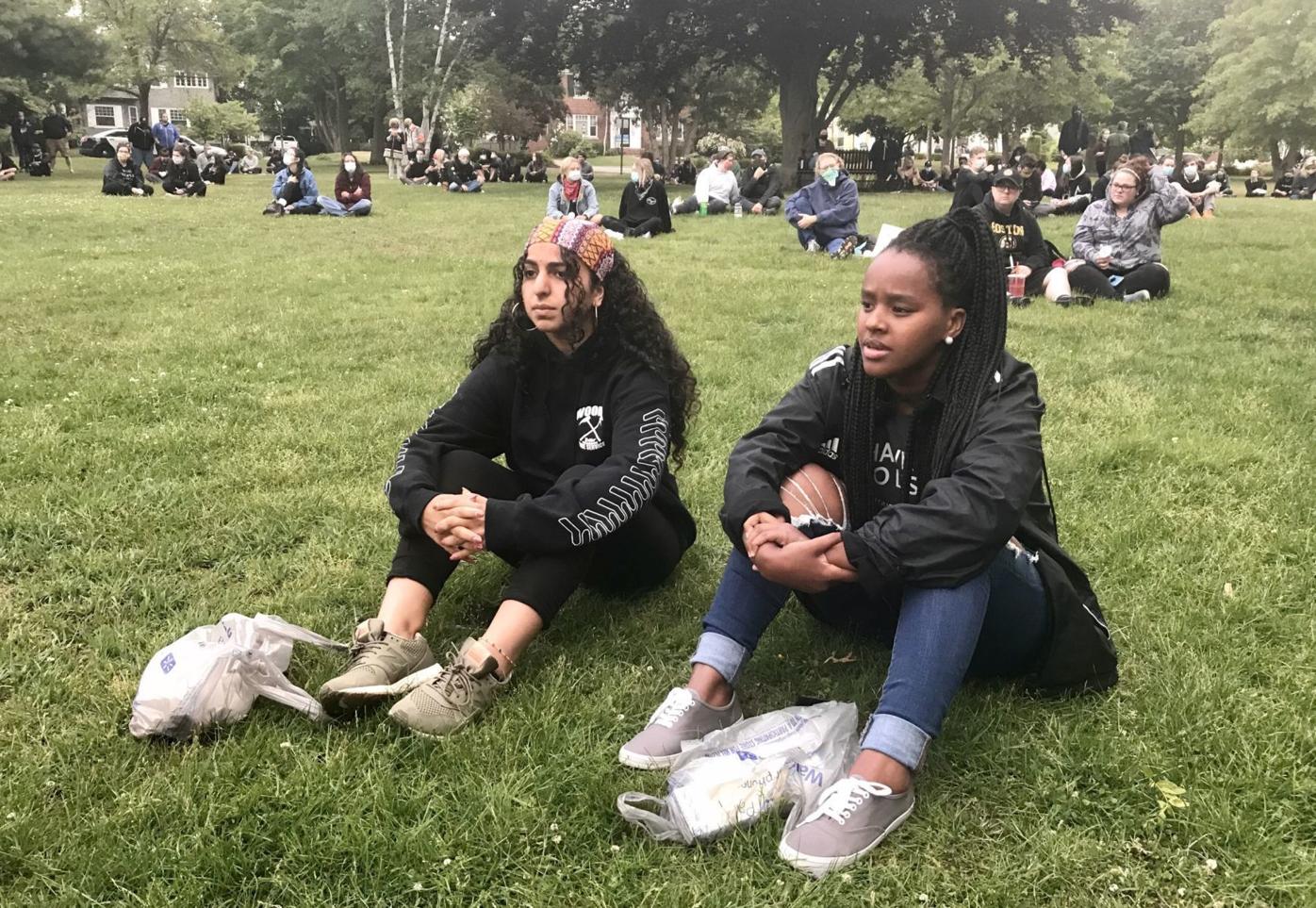 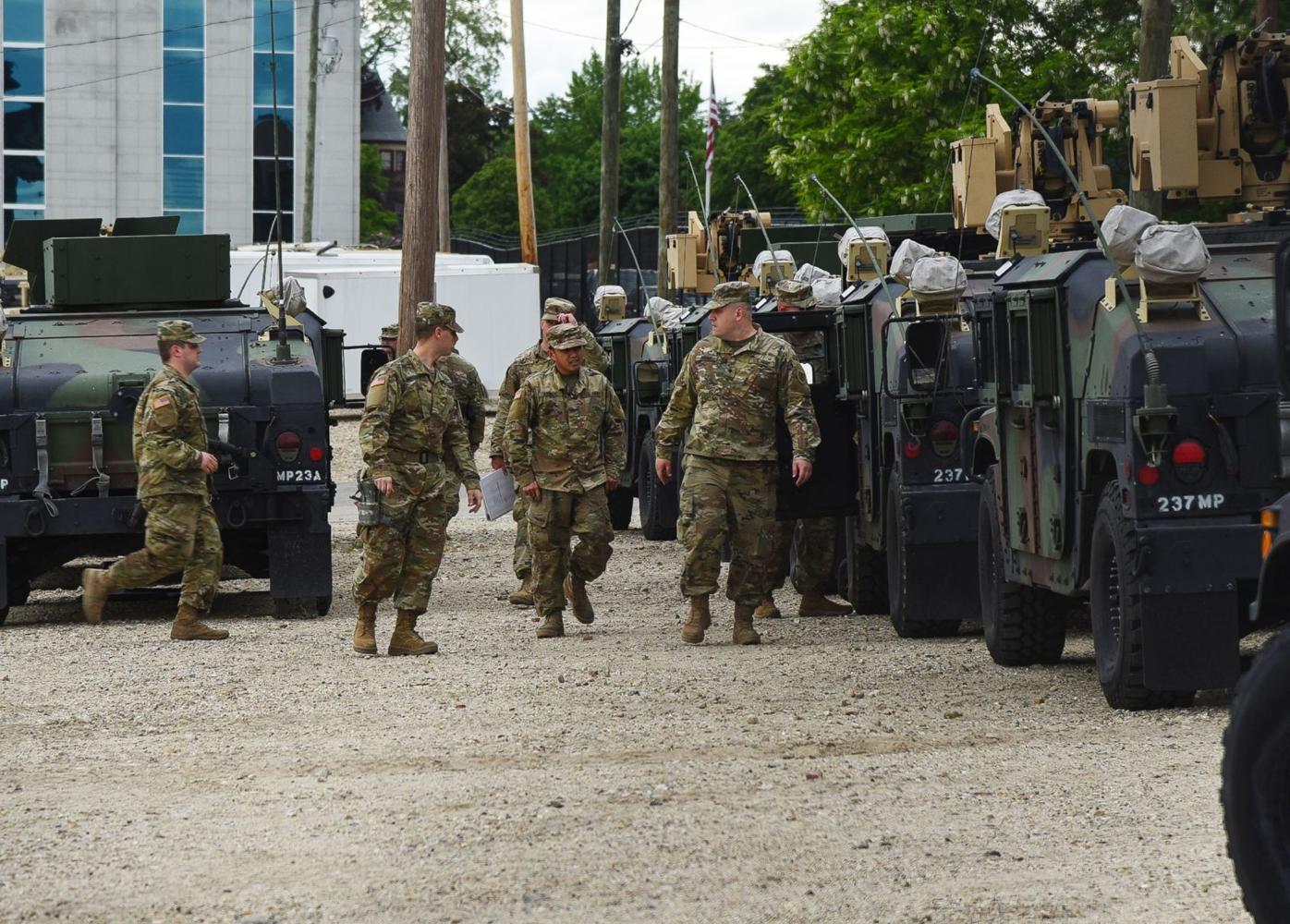 Members of the National Guard staged at the armory in Manchester Tuesday afternoon, called out as a precaution against possible violence later in the evening. 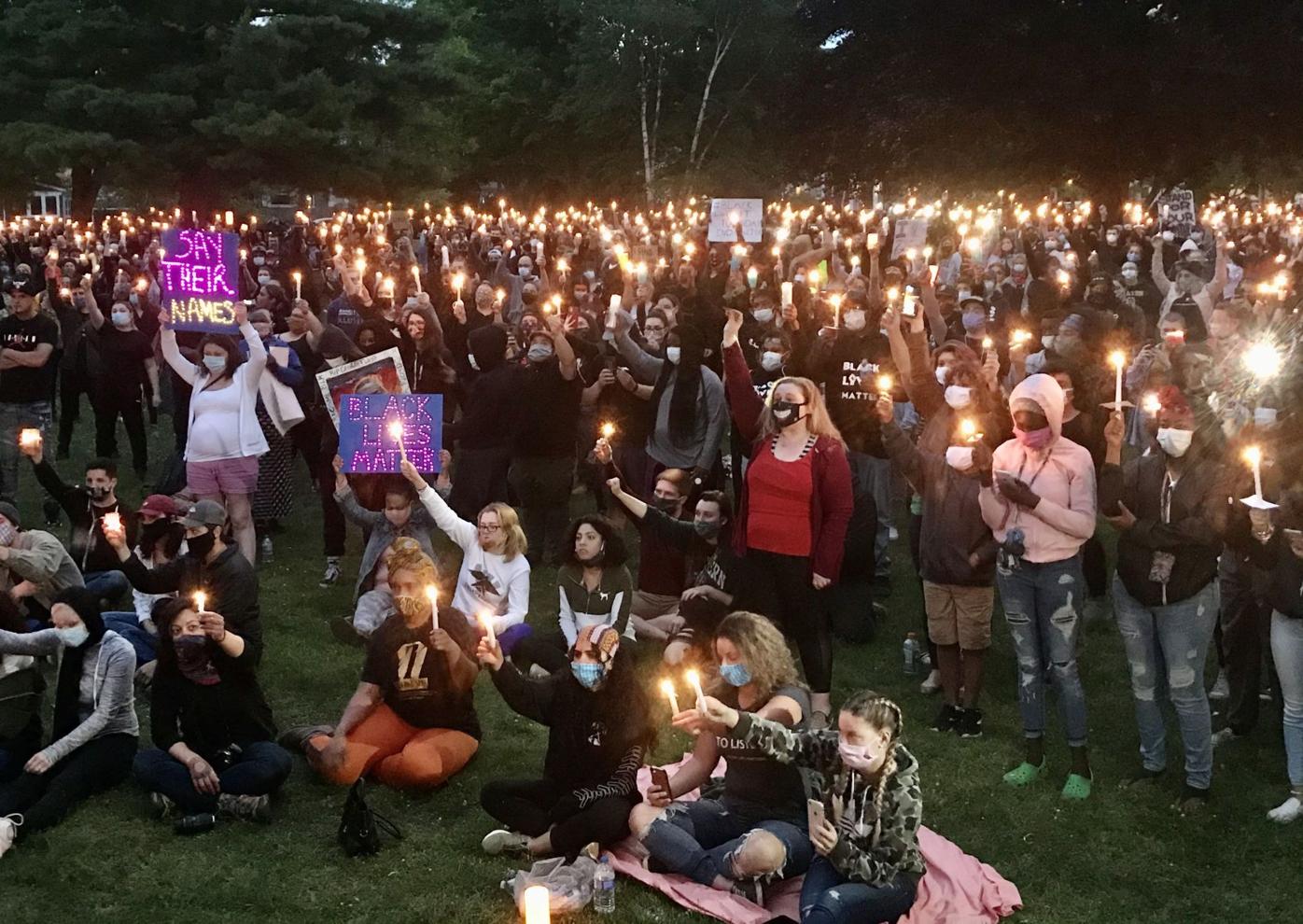 Hundreds raise their candles Tuesday night near the end of a Black Lives Matter vigil in Manchester’s Stark Park.

Andrea Tomlinson holds a placard with her son, Elijah Tomlinson-Burrell, 18, at Tuesday night's Black Lives Matter vigil in Manchester's Stark Park. Both are from Northwood.

Members of the National Guard staged at the armory in Manchester Tuesday afternoon, called out as a precaution against possible violence later in the evening.

Hundreds raise their candles Tuesday night near the end of a Black Lives Matter vigil in Manchester’s Stark Park.

MANCHESTER — Hundreds took part in a candlelight vigil at Stark Park in Manchester Tuesday night to mourn lives lost to racial injustice, as state and local police and National Guard troops were staged and ready to deploy around the city if demonstrations turned violent.

Those fears were realized late Tuesday, as combative groups of protestors congregated near Taco Bell at 1045 So. Willow St. Protestors could be seen yelling at state and local police, setting off fireworks and throwing objects at police vehicles.

The vigil was organized by Black Lives Matter Manchester, the same group behind a peaceful protest held Saturday in the Queen City, where over 800 participants marched along Elm Street to protest the killing of George Floyd by a Minneapolis police officer, as well as other people of color who have died at the hands of police across the U.S.

Ronelle Tshiela, one of the organizers of Black Lives Matter Manchester, said the vigil was an opportunity to refocus after looting and violent confrontations with police in other cities during demonstrations.

“A vigil is more to hear stories, and honor the lives of people who can’t be here with us,” Tshiela said.

Tshiela said she was worried that the presence of police and National Guard members would take away from the intention of the evening.

“It’s a time for us to mourn. It’s hard when you have the National Guard on the back of your neck. I’m hoping people understand that their neighbors are hurting. This isn’t an easy time for anybody in this country, but black Americans are hurting,” Tshiela said.

“I know the people who actually come for the cause are going to remain peaceful,” Tshiella said.

Organizers passed out candles as the sun set.

“In a state where we’re about 2% ‘other,’ I’m very concerned for my son’s safety and I have been for a long time.”

Demonstrators were determined to keep the vigil peaceful.

“We’re here to come in peace and leave in peace, maybe more peace than we came with,” said Mollash Campbell of Goffstown

“I think there’s strength in numbers, said Rich Gray. “Rather than throwing rocks through windows and burning stores, huge numbers are just as effective.”

A moment of silence followed.

On Monday, authorities expressed alarm over social media “New Hampshire Protests” posts referencing a violent protest planned in Manchester. The post included an image of a police cruiser on fire.

“We will then march all throughout Willow Street and let our voices be heard,” the post read. “Police cars will be tipped. Graffiti is welcome. Bring masks. Take examples from riots in other cities.”

He was charged with misdemeanor criminal threatening. A judge ordered him jailed until Wednesday and encouraged him to get a lawyer in order to make a case for bail.

By 8 p.m., Stark Park was full of people holding candles.

Speakers offered remembrances of black people killed by police around the country. Then several black men and women from New Hampshire shared stories of racism they had experienced — from slurs and being followed around shops, to subtler situations that left them questioning themselves — and the exhaustion of holding it all in.

“After seeing all the riots and everything, it’s good to be a part of peace,” Mollash Campbell of Goffstown said before she offered a prayer to the vigil.

Speakers reminded the white people in the crowd to remain aware of racism when they left.

“You might get to put your candles and your signs down, but when we leave here we leave with the fears they all talked about,” Ronelle Tshiela said.

Manchester Police Chief Carlo Capano told city aldermen Tuesday his officers would be monitoring the vigil and the city at large.

“I am preparing for the worst possible situation, and hoping for the best possible situation,” Capano told aldermen in a memo. “The obvious concern is those that leave that (Stark Park) vigil and go to the area of South Willow Street, or any other areas of the city to cause problems. I’m not putting my officers or this city in a position of being caught off guard and losing control of any portion of our city. Our top priority is to manage this potentially dangerous situation before it gets out of control and protect the life and property of the citizens of Manchester.”

Manchester Mayor Joyce Craig issued a statement ahead of the vigil, saying she remains “committed to listening to and supporting our community during this time of mourning and outrage.”

“I stand with all those who are peacefully protesting the unjust killing of George Floyd, and the racism and violence directed at Black Americans across our country,” said Craig in a statement. “Peaceful protest to bring attention to systemic racism is right, but causing destruction to our communities is not.”

She said “the city is prepared for any scenario.”

Around 10:30 p.m., groups of protestors began gathering along So. Willow St. near the Taco Bell, Chipotle and Dunkin Donuts restaurants. Some appeared to be armed with long guns, while others were seen throwing what appeared to be water bottles at police.

By 12 a.m., Manchester police confirmed several arrests had been made.

In Manchester on Tuesday morning, a retailer at the South Willow Street shopping center specifically mentioned in the Facebook post, was having workers board up his glass entrance doors. Kirk Rawson, co-owner of the A Market health food store, said he has no idea why Manchester Commons was highlighted.

“It’s all new. We don’t have a lot of experience with what we’re supposed to do if there’s a riot,” he said.

Just after 10 p.m., about 50 protesters could be seen in the area near Petco and Party City on South Willow Street -- nearly a mile away from Manchester Commons. About two dozen police stood nearby.

Lt. Col. Gregory Heilshorn said Guardsmen would be on standby in the event that Manchester police and New Hampshire State Police need assistance.

Heilshorn said the guardsmen are military police and security forces trained in civil disturbance and were briefed by military lawyers about their limitations. They would be called on if needed to protect life, property and the rights of people to peacefully demonstrate, he said.

Nancy Parsley and a few other activists held “Black Lives Matter” signs across from Denbow. They came to South Willow Street “because everyone is already looking at Manchester Commons,” Parsley said. “We’re trying to be peaceful.”

“New Hampshire has been a model example of peaceful protest,” wrote Soucy and Shurtleff. “We proudly stand with New Hampshire citizens who are taking action to oppose systemic racism in productive and positive ways, often in conjunction with members of local law enforcement. This is a time for all public officials to listen to the protests and identify paths forward to ensure that every Granite Stater has the right to live free.”

Chants of 'take a knee' at Concord march; armed counter-protest

Dozens of New Hampshire House Democrats refused to stand for the national anthem at the final session of the legislature on Wednesday. Among those who knelt or remained seated were state Reps. Lisa Bunker of Exeter, along with Willis Griffith and Nicole Klein-Knight of Manchester.

The Chamber Collaborative of Greater Portsmouth’s board chair has resigned after saying he received backlash for his personal social media posts.

WASHINGTON — U.S. median household income hit a record high in 2019 and the poverty rate fell, according to a government survey released on Tuesday that offered a snapshot of the economy before millions of American jobs were destroyed by the coronavirus pandemic.