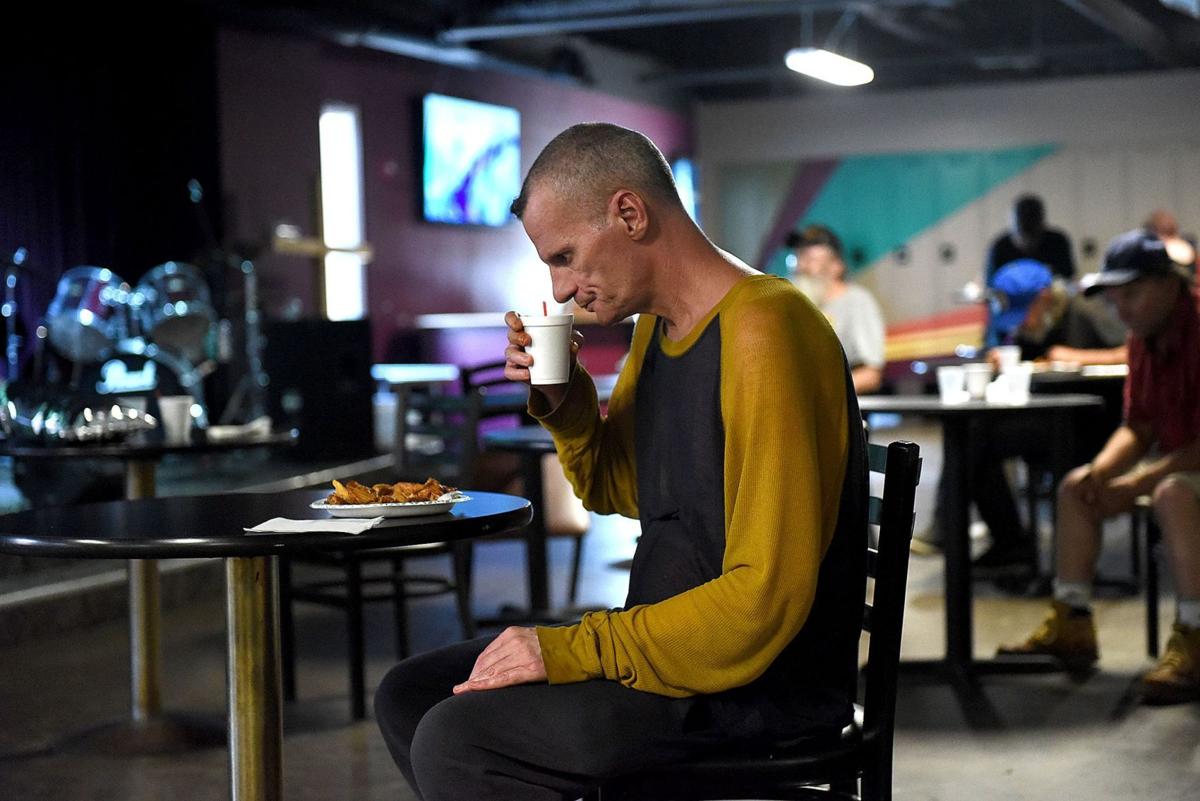 Bruce Damato of Manchester has lunch at the 1269 Café on Chestnut Street in Manchester on Tuesday. 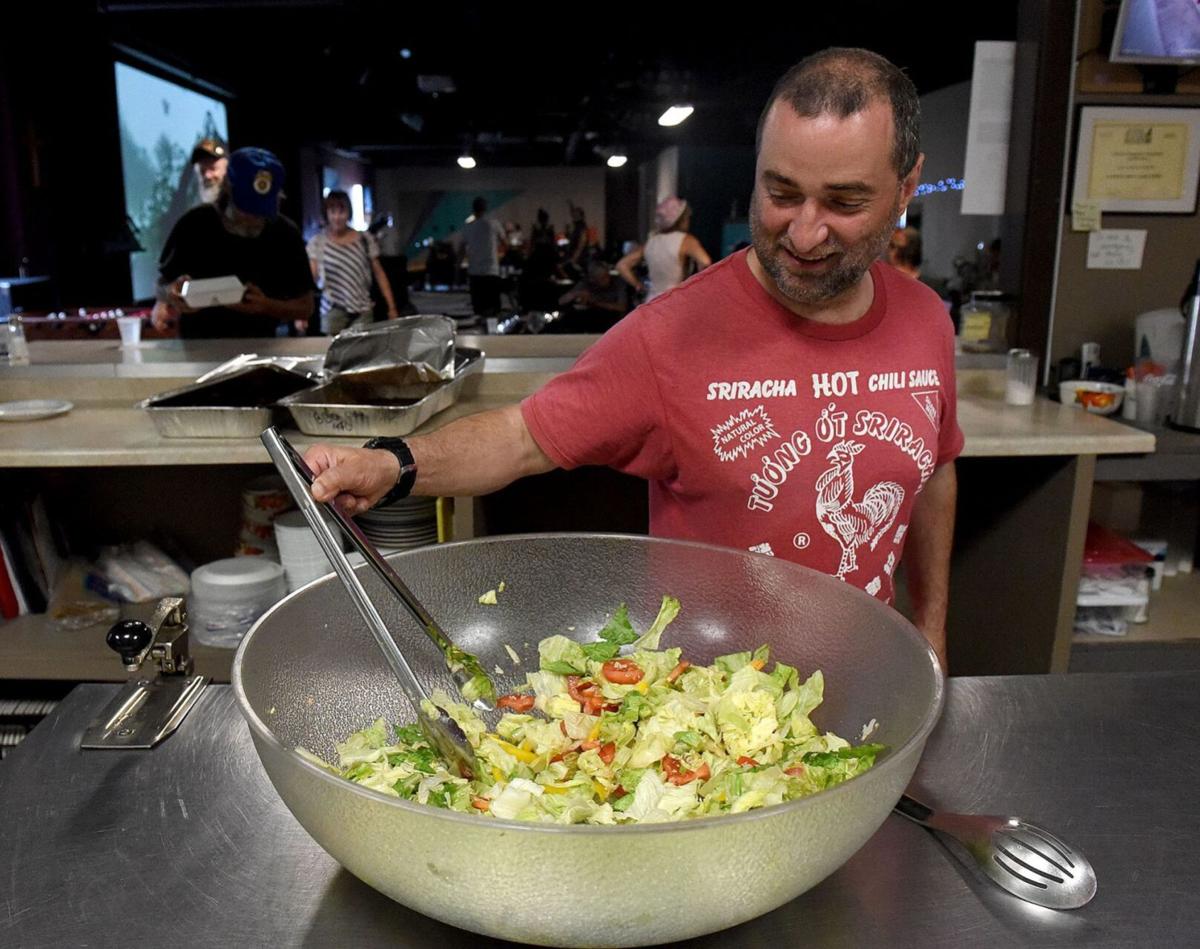 Keith Keene of the 1269 Cafe begins the cleanup process after serving lunch at the homeless ministry on Tuesday. 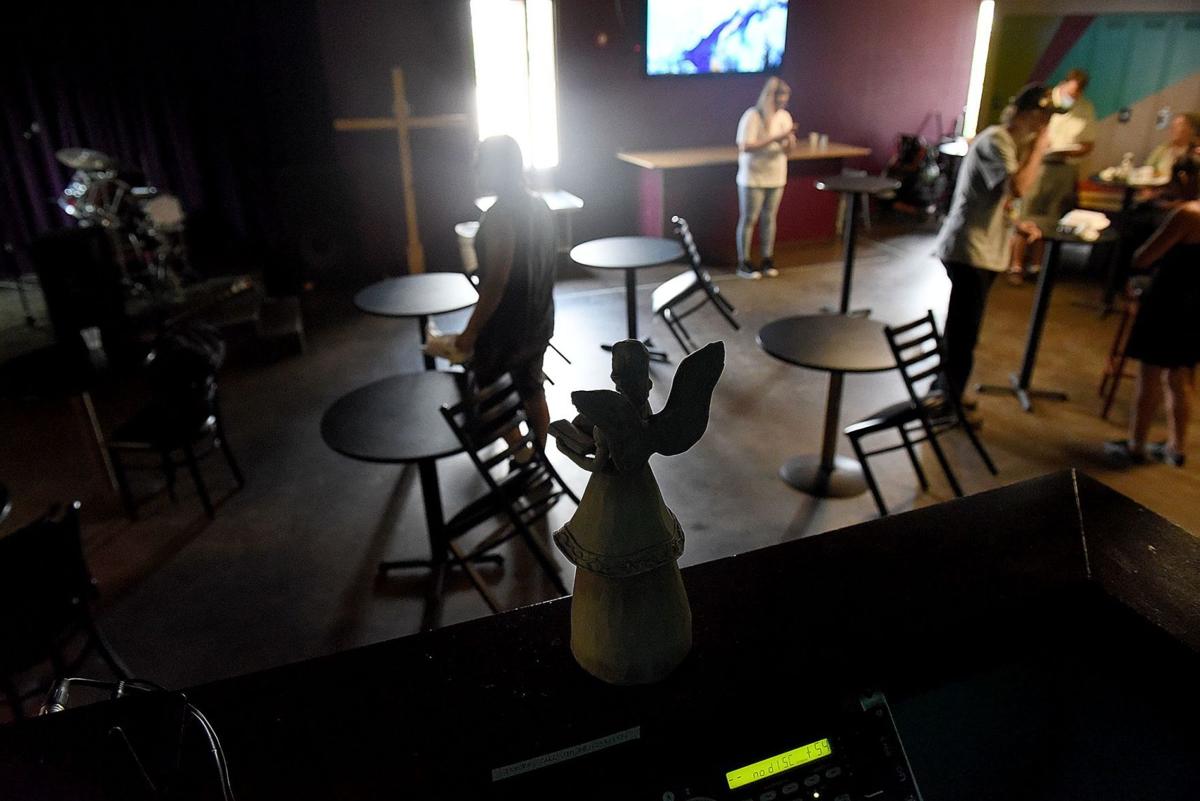 1269 Cafe currently operates in the second floor of the old Manchester police station on Chestnut Street. Most activities, including lunch, performances and ministry services take place in this large room. 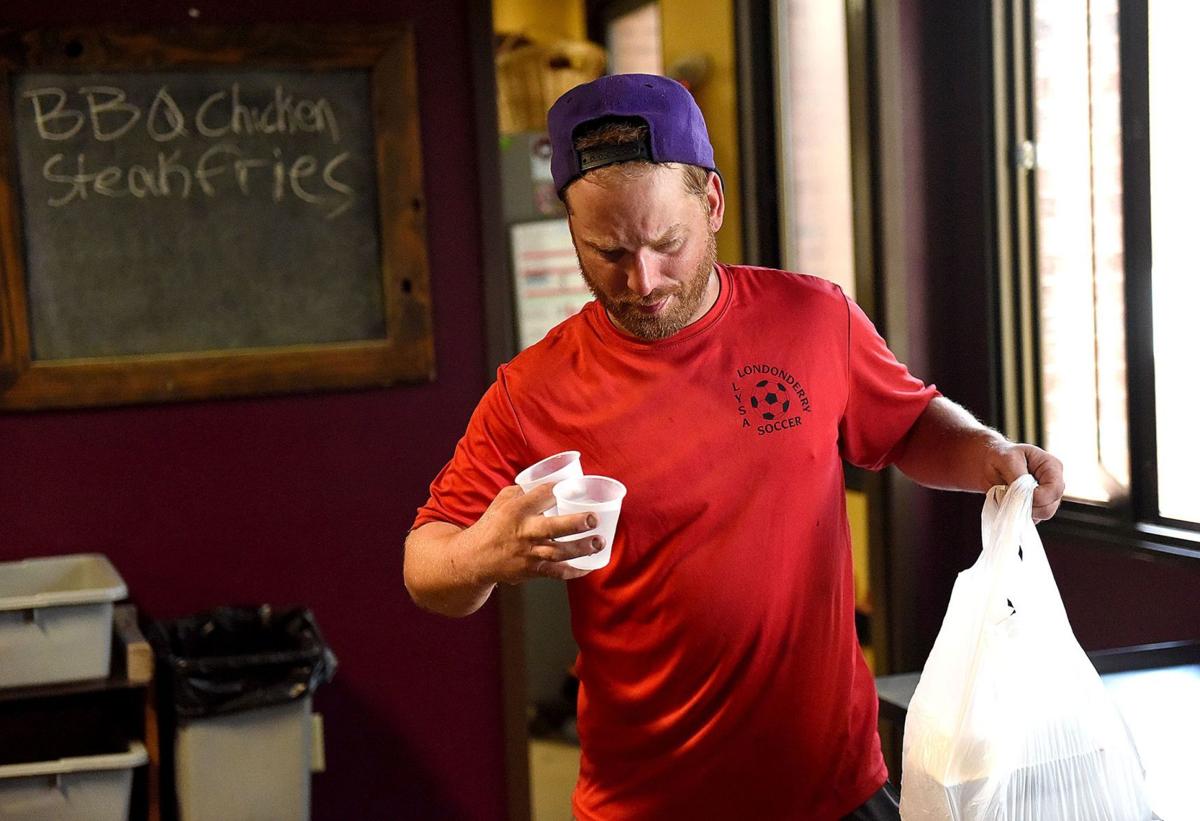 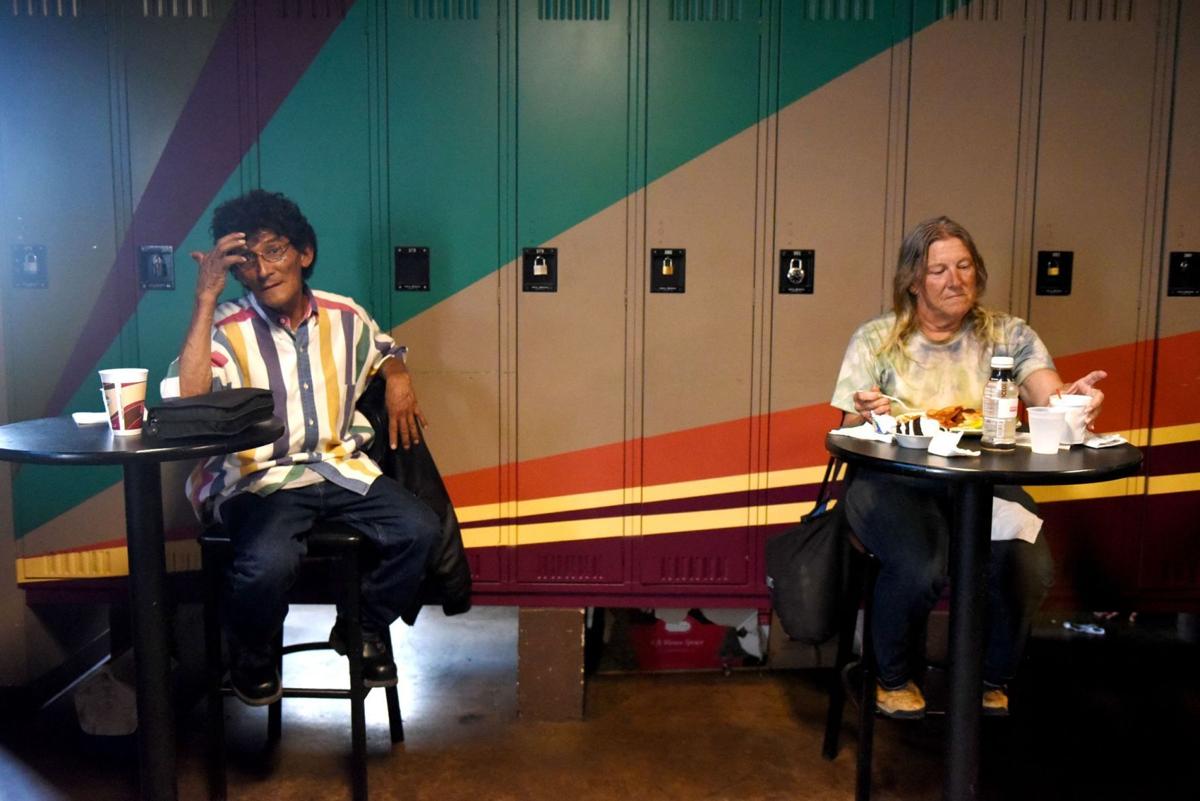 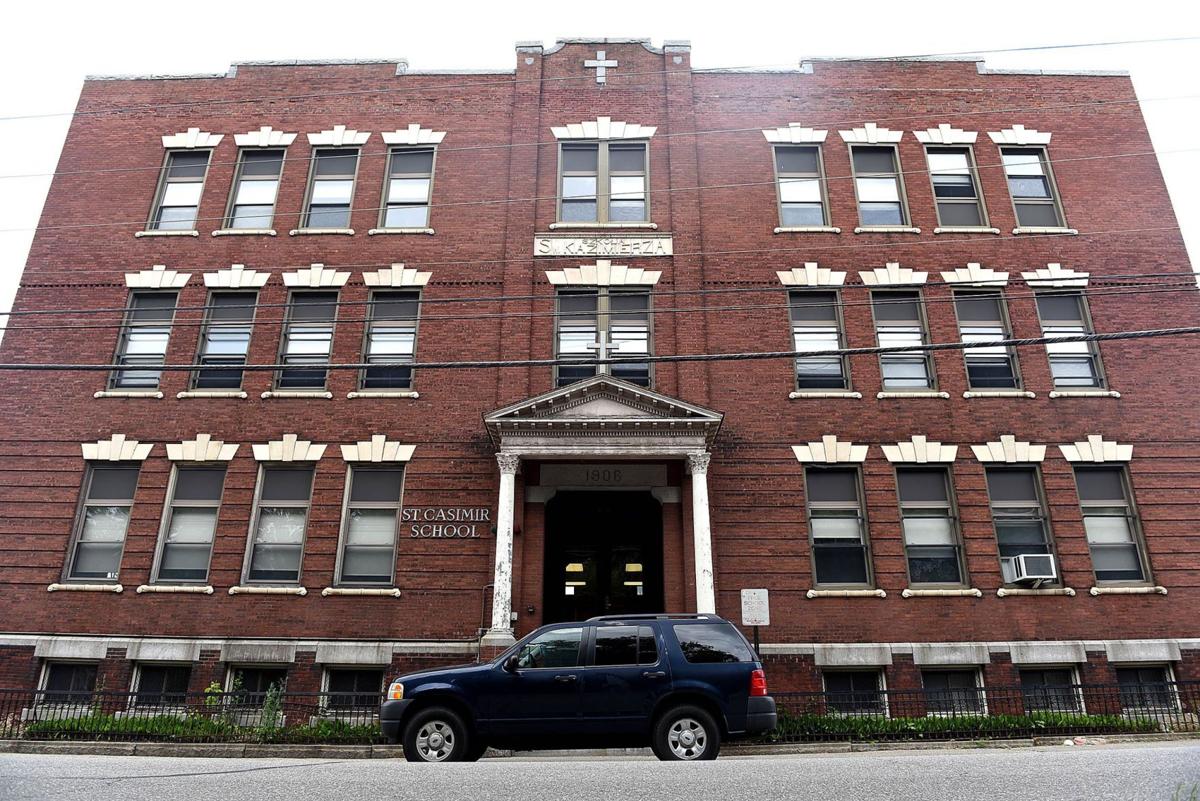 The 1269 Café is negotiating to buy the the former St. Casimir School building on Union Street in Manchester. 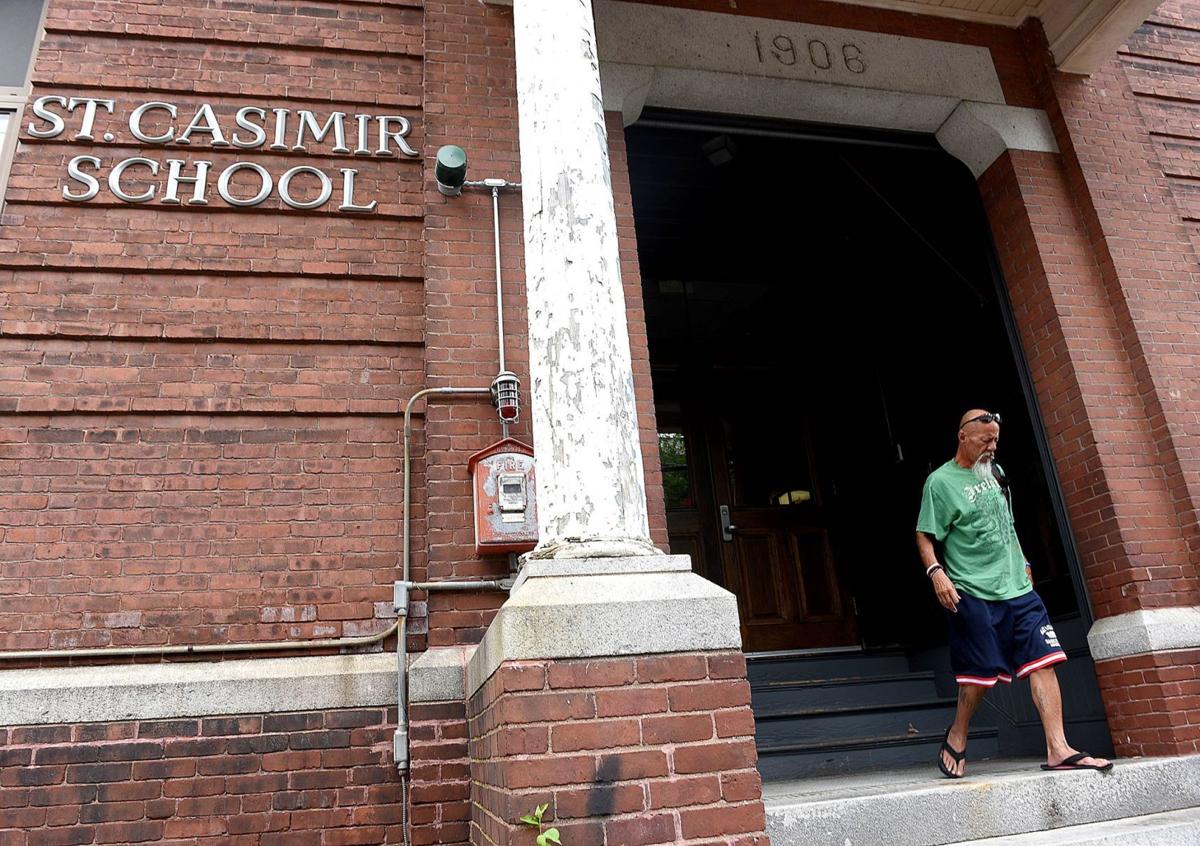 Jeff Hardwick of Manchester walks down the steps of the former St. Casimir School building on Union Street in Manchester on Wednesday.

Bruce Damato of Manchester has lunch at the 1269 Café on Chestnut Street in Manchester on Tuesday.

Jeff Hardwick of Manchester walks down the steps of the former St. Casimir School building on Union Street in Manchester on Wednesday.

MANCHESTER — A Christian homeless ministry is poised to buy the former St. Casimir school building for an outreach-recovery center providing various support services for the homeless, including housing.

The Catholic Diocese of Manchester, owners of the four-story brick school building on Union Street, is in final negotiations with 1269 Café for the property, according to the founders of the 11-year-old organization, Craig and Mary Chevalier.

For the past four years, 1269 Café has leased 4,000 square feet on the second floor of the former Manchester police station, where it provides lunch six days a week and showers, laundry, lockers and ministry.

Craig Chevalier said he will move the operation as soon as a deal is completed, likely before the fall.

Initially, 1269 Café will confine its operation to the basement, he said. But the building offers four floors and four times as much space as currently available, he said.

“This is the Jesus people finally taking a role in something we should have been doing a long time ago,” he said.

He did not want to discuss a price until the transaction takes place. He said St. Mary’s Bank will provide financing.

In a statement, Bishop Peter Libasci said St. Hedwig Parish, which operated the school for years, is in the final stages of negotiation.

“We are happy to support the 1269 Café, a Christian-based organization that for more than 10 years has done important work among ‘the least of these’ and to provide the additional space they need to grow their ministry,” Libasci said.

New Horizons currently shelters up to 40 people at the school as part of the social-distancing efforts at its nearby Manchester Street shelter, said Families in Transition spokesman Cathy Kuhn. That arrangement will continue at least until the end of July, Libasci said.

Kuhn welcomed the expansion of 1269 Café to St. Casimir.

Earlier this month, 1269 Café submitted applications for city approvals. According to their paperwork, congregate housing is permitted in the zone, but variances will be needed for the outreach and recovery activities.

The organization will need site plan approval and a reduction in the required on-site parking.

Chevalier said the building’s four floors will allow 1269 Café to implement a step-up program. The ground floor will be for outreach and the basic support services and ministry that 1269 Café currently provides.

The third floor will offer supportive housing, where 22 people in recovery can remain sober and avoid destabilizing living situations. The fourth floor will house a library and an auditorium for special events.

He said the program is designed to transition people out of homelessness.

“We know what we want. We don’t know exactly how it will work yet,” he said.

The Chevaliers said they don’t see themselves in competition with New Horizons. For example, they don’t provide breakfast and dinner, and they will not run an open-door shelter as part of their program.

Chevalier said that they are in talks with the Manchester Fire Department for use of the first floor as an overnight emergency shelter when needed.

Most of 1269’s activities take place in a café-like room that has a stage set up for live performances and ministry.

Once COVID-19 hit, the organization implemented social distancing measures and allowed one person per table. That helped build one-on-one relationships with guests, Chevalier said, and they plan to keep that in the future.

Stephane Webster, 47, was waiting his turn for a shower on Tuesday. He and his girlfriend are homeless, after he lost his job when a local pizzeria closed in March. Although he receives unemployment, it’s not enough for an apartment, he said.

He lives in a tent and gets meals at one of the homeless feeding sites, but it is closing at the end of this week. He enjoys 1269 Café because of its religious themes, he said.

Bonnie Cote, 60, lives in a Families in Transition apartment on Market Street and hopes to eventually get into an apartment of her own, though she said it is difficult for former homeless people to find landlords willing to rent to them.

She prefers 1269 Café to New Horizons.

“It offers much more in a respectful way. People don’t feel put down,” she said.

GORHAM — An indoor, drive-thru mobile food pantry is poised to become a model for similar efforts throughout the state.

Homeless move across the street after courthouse eviction

The day after the state removed dozens of people from the Hillsborough County courthouse lawn and put up fences around the grounds, almost 20 people were camped nearby, with nowhere else to go.

Tents came down and fences went up outside the Hillsborough County courthouse Friday as New Hampshire State Police oversaw the clearing of dozens of people from courthouse lawns.

The state has rejected a third suggestion by Manchester city officials for a facility to house homeless on the coldest of winter nights — the National Guard Armory parking lot.