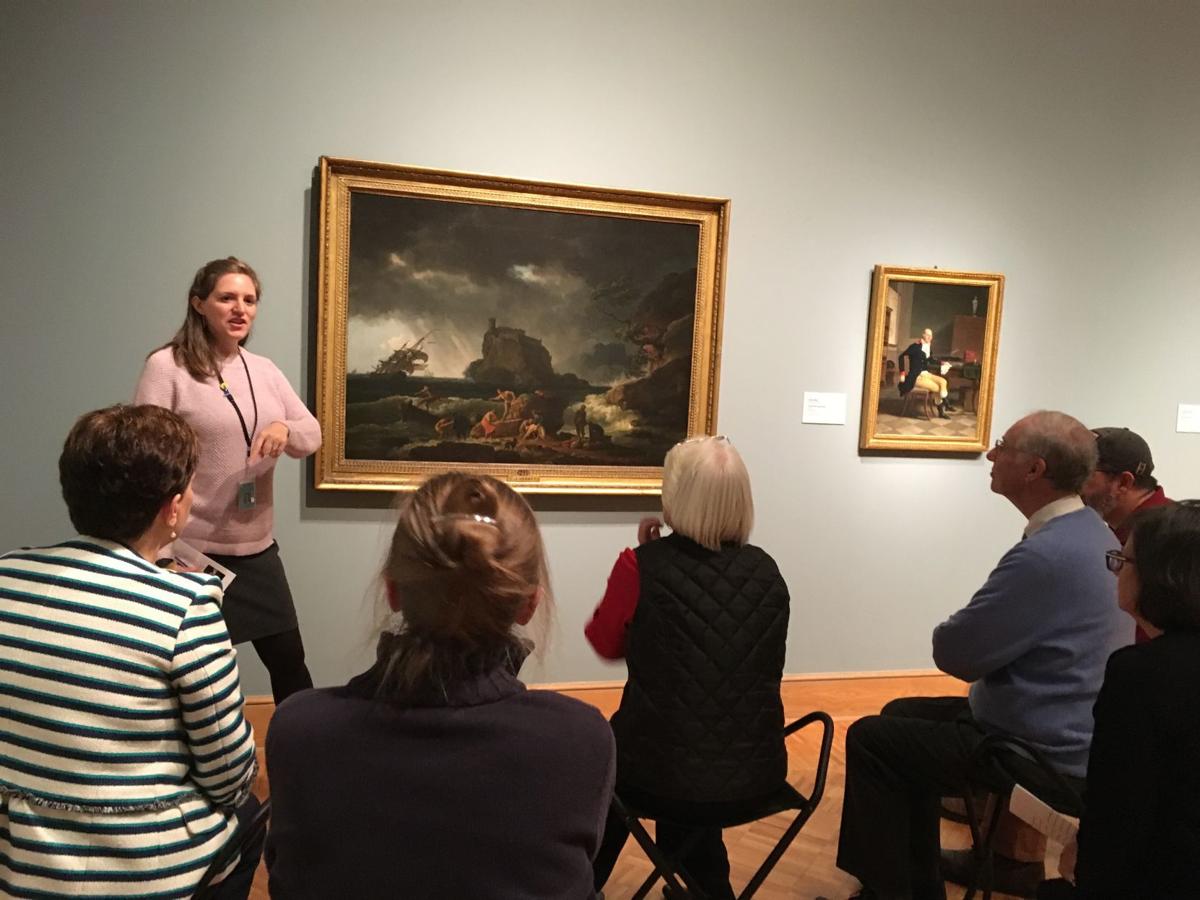 Lynn Thomson, assistant director of art education and community engagement at the Currier Museum of Art, standing at left, leads a discussion about the painting “The Storm” during “The Art of Hope” program last week. Shawne K. Wickham/Sunday News 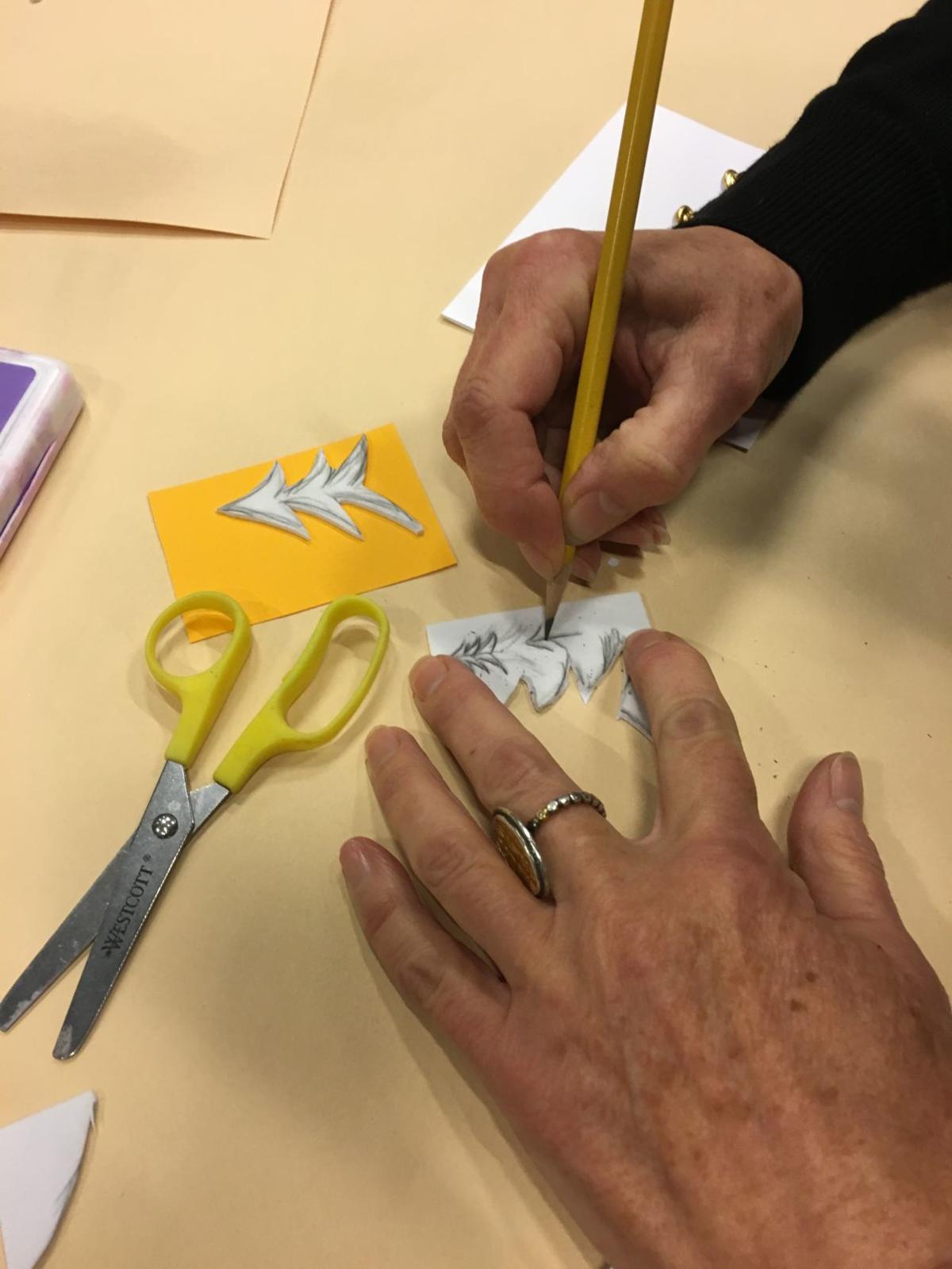 A woman attending "The Art of Hope" program at the Currier Museum of Art last Monday designed her own stamps to create greeting cards. 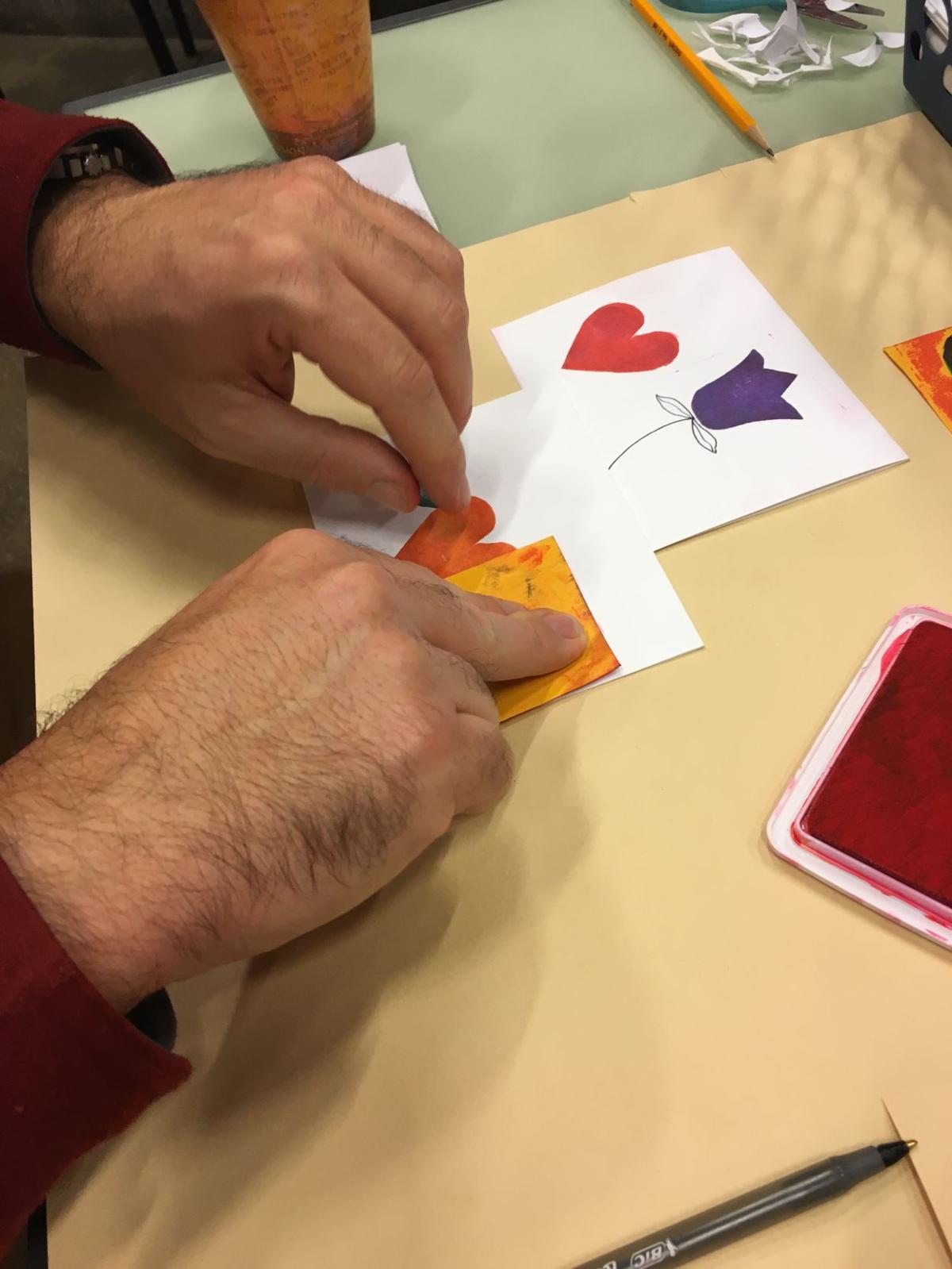 A participant in “The Art of Hope” program at the Currier Museum of Art makes greeting cards during the hands-on activity last week. 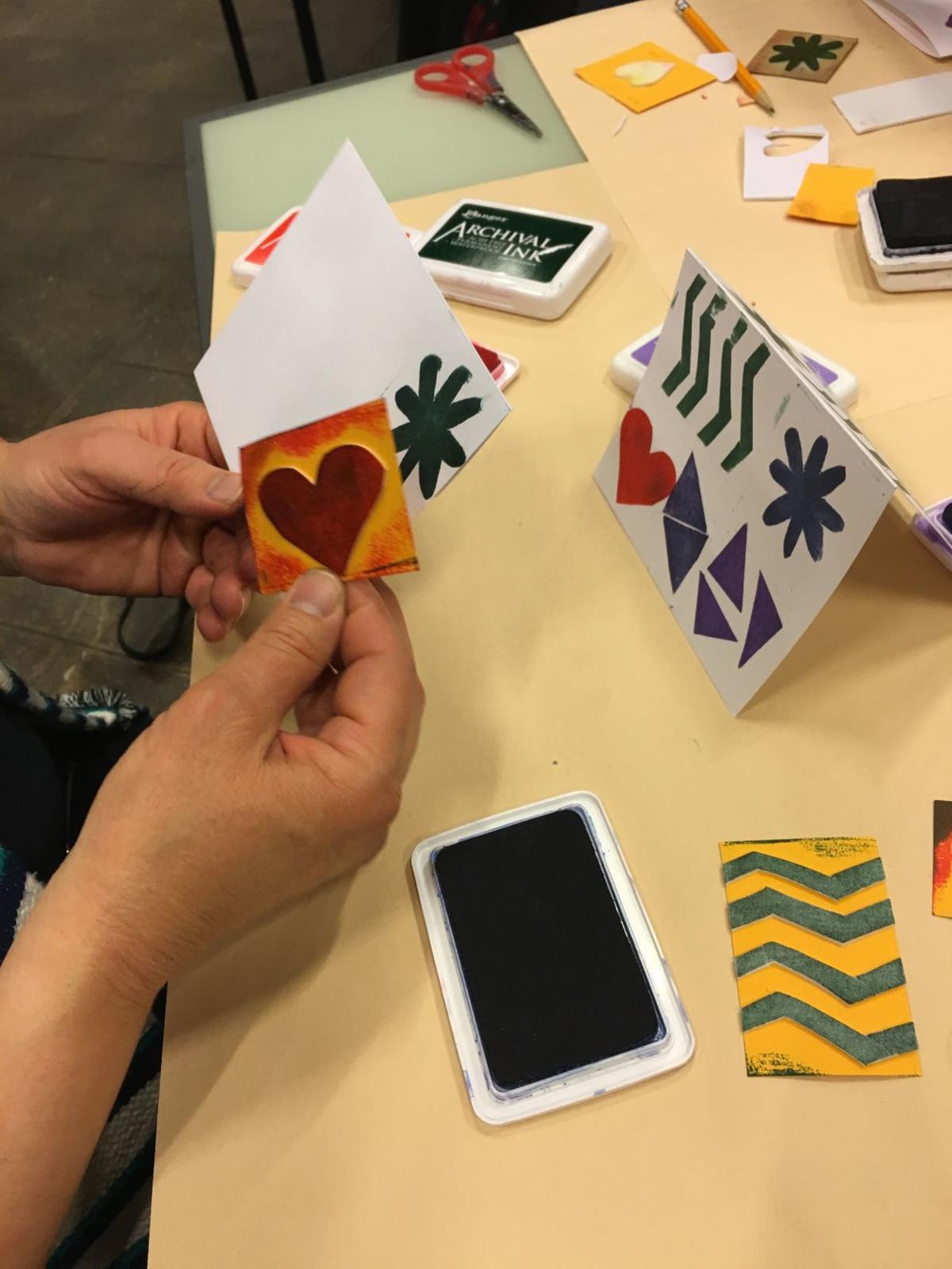 Participants say the hands-on activities during "The Art of Hope" program are both fun and therapeutic.

Lynn Thomson, assistant director of art education and community engagement at the Currier Museum of Art, standing at left, leads a discussion about the painting “The Storm” during “The Art of Hope” program last week. Shawne K. Wickham/Sunday News

A woman attending "The Art of Hope" program at the Currier Museum of Art last Monday designed her own stamps to create greeting cards.

A participant in “The Art of Hope” program at the Currier Museum of Art makes greeting cards during the hands-on activity last week.

Participants say the hands-on activities during "The Art of Hope" program are both fun and therapeutic.

MANCHESTER — A visit to an art museum can inspire emotion, introspection, even transcendence.

And for families who are dealing firsthand with addiction, the folks at the Currier Museum of Art want to offer something more: hope.

Held after hours, “The Art of Hope” program allows parents and others affected by the drug crisis to spend a few hours a week thinking about art, sharing conversation and working on simple art projects. Participants say the program offers a safe space to meet others who know what they’re going through because they’ve been through it themselves. But it also serves as a respite, a place to get away from the constant stress and worry that come with having a loved one mired in addiction.

One mother, who didn’t want her name published, said “The Art of Hope” gives her “a peaceful place to reflect on my experience.”

“The quiet beauty of the art museum and the engaging art activities offer a moment of self-care,” she said.

Each week focuses on a different theme, such as resilience, self-care, family dynamics, social connection, shame and hope. The evening starts with the group viewing a specific artwork and sharing their responses to it. Then there’s some group discussion time, followed by a hands-on activity.

Last Monday’s group started off in front of an oil painting by 18th century French artist Claude-Joseph Vernet. It’s called “The Storm,” and it depicts people struggling ashore, their ship run aground in the background, as others on land rush to help.

When Lynn Thomson, assistant director of art education and community engagement at the Currier, asks for first impressions, the response is immediate.

“There’s blue out there beyond,” a woman named Sharon observes, pointing to a small bright patch in the painting’s roiling sky. “It’s going from the chaos to sunshine and glory.”

She was drawn to this painting the first time she came to the program, she tells the others. “I said, ‘Oh, there’s my life,’” she said with a rueful laugh.

The theme for the evening is social connection, so Thomson asks them to focus on the people in the painting. “Why are these people important to each other?” she asks.

“Survival,” one woman replies. “Helping each other. It goes to show when there’s some disaster, people do pick it up.”

One of the men in the group notices a man in the foreground, sitting with his head down: “He looks like he’s in despair.” Two other men in the painting are holding the limp body of a woman. “That’s his daughter,” he decides.

Another man points out that everyone is still in danger. Waves lap at the survivors’ feet, and there’s an urgency among the rescuers. “It shows that just because you made it to shore, you may not be safe,” he says.

They’re talking about the painting, but it’s clear that the chaotic scene the artist painted 260 years ago resonates in their own lives.

They notice a fortress in the background, remote and inaccessible on a rocky island. “That was our life before drugs,” remarks Patrick McKeown, who co-facilitates a family support group with his wife Susan. “And there’s our kids on the boat of recovery.”

Thomson tells them a little more about the artist. Storms and shipwrecks were a favorite theme; and legend has it that Vermet once tied himself to a mast during a storm so he could better depict the experience in his work. She says she finds the painting hopeful: “They’re all there together, working as a team.”

A man named Brian approaches the painting to look more closely. He wonders about the people on the ship, who they were and where they were going. “They left some place and thought it would be better,” he says.

He points out a baby who’s being held tightly by a woman as she struggles ashore. At least there’s a chance that child will be raised well and in safety, he says.

Brian is helping his mother raise the five children of a relative who struggles with addiction.

The group comments on a pretty painting of flowers nearby. Thomson says she’ll try to work in a still life in an upcoming session.

“We don’t have a still life,” one woman quips. They share a laugh of recognition.

The group then moved back to the front lobby, where Patty Perkins, who runs a family support group at Hope for New Hampshire Recovery, led a discussion about social isolation and self-care. She suggested keeping track of how often you eat, sleep, exercise, attend church and do other activities. “Pick out a few things you consider important,” she said. Measuring your progress in that way can help buoy you during tough times, she said.

And when you’re dealing with a loved one struggling with addiction, it’s important to surround yourself with people who understand your situation, Perkins said. “It’s not like you have to bare your soul,” she said. “Going out with someone and not talking might be just as important as going out and talking.”

Brian said his “barometer” for how he’s handling everything is how well he’s sleeping. At first, he said, he used to wake up almost hourly, imagining the phone was ringing, bringing bad news about his loved one.

One mother admitted that when her son’s drug use got worse, she started drinking more. “That’s how I was dealing with the stress,” she said. “It wasn’t a healthy way, but it was the way I was doing it.”

She’s more careful now, and is thinking of getting rid of the alcohol in her home because of her son, she said. “It’s not even healthy to have it in our house, that’s how I’m feeling,” she said.

They’re gentle with each other. Brian told the group he got sober when he was 20, so alcohol is “off the table for me.” Then he turned to the woman who had talked about drinking more and said, “I hope I didn’t come across as judging you.”

McKeown said social connection is critical for families who have a loved one struggling with addiction. “This is a lot to bear,” he said. ”To have a child as ill as our children are, always with the fear in the back of our brain, ‘I wonder if they’re going to get fentanyl tonight and get a dose that’s lethal,’ that’s always the fear.”

A woman named Sharon said she has learned to rely on others when things get difficult. Because she had a lot of social connections “during the healthy years,” she said, “when I need help now, I can call people and they help me.”

Another mom looked wistful. “I was amazed when you said you called a neighbor,” she told her. “I was thinking I didn’t have anyone to call.”

Now they have each other.

Corie Lyford, the studio outreach manager at the Currier, who comes up with the art projects each week, said you don’t have to have any artistic talent to participate. “And you can maintain a conversation while you’re doing it,” she said.

There’s a “group wisdom” that comes out of their shared experiences, McKeown said. “All of us are better than any one of us,” he said. And he said, “It’s so nice to be able to come and be with some people who get it.”

Sharon said there’s also something therapeutic about doing the art projects each week. “You can revert to your childhood,” she said. “It’s play activity.”

The next session of “The Art of Hope” begins Jan. 7. No registration is necessary; walk-ins are welcome, and there is no charge. For more information, visit: currier.org/the-art-of-hope.

Beyond the Stigma, a series exploring solutions to the state’s addiction and mental health challenges, is sponsored by the New Hampshire Solutions Journalism Lab at the Nackey S. Loeb School of Communications and funded by the New Hampshire Charitable Foundation, Dartmouth-Hitchcock Medical Center, NAMI New Hampshire, and private individuals. Contact reporter Shawne K. Wickham at swickham@unionleader.com.

WASHINGTON - A bipartisan group of lawmakers is calling on President Joe Biden to let more physicians prescribe an opioid-treatment drug, in what has emerged as an early test of his administration's opioid strategy.

A documentary about the world’s only orchestra that was created by and for musicians living with mental illness will premiere on New Hampshire PBS tonight[Thursday, Oct. 1].

CONCORD — Advocates battling domestic violence had plenty to celebrate Monday as Gov. Chris Sununu signed a trio of bills expanding the rights of victims and closing a major loophole in criminal law.