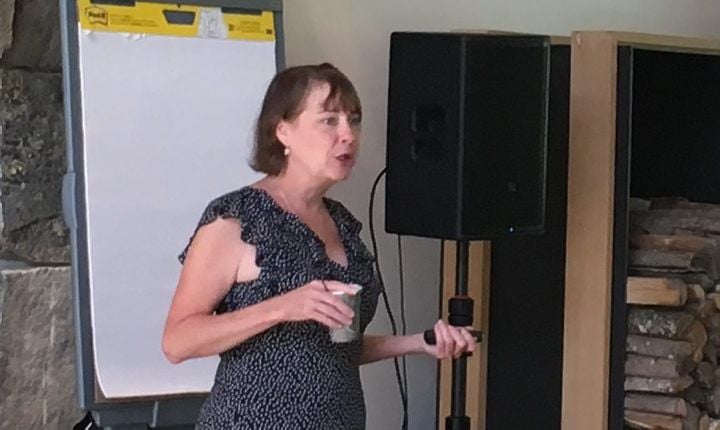 Psychologist Cassie Yackley presented a daylong seminar on trauma-informed care in Kensington earlier this summer. She describes the response to chronic stress as "a path in the woods."

Psychologist Cassie Yackley presented a daylong seminar on trauma-informed care in Kensington earlier this summer. She describes the response to chronic stress as "a path in the woods."

Much of the attention on the addiction and mental health challenges facing the state has focused on helping adults get the treatment and support services they need.

But what about the children?

Cassie Yackley, a Sutton psychologist, is a leading expert in the effects of what social scientists call ACEs - adverse childhood experiences.

Studies show that the more ACEs a child is exposed to - such as abuse, domestic violence, parental substance use or neglect - the more likely it is that he or she will end up at risk for physical, psychological and behavioral disorders, Yackley said. And the reason why is chilling: Neurological studies show that exposure to trauma can negatively affect the development of a child's brain.

When she first went into the mental health field, Yackley says, she had no idea she would become known as the "trauma lady."

But the more she studied neuroscience, the more convinced she became: If we want to address some of our greatest societal challenges - substance abuse, mental illness, suicide and ailments such as heart disease and diabetes - we need to do something about trauma.

Yackley spent 23 years as a mental health clinician, dealing with complex trauma cases, then turned her abundant energy and passion for the issue to education. Working with Antioch University New England's Center for Behavioral Health Innovation, she trains educators, police officers, social service providers, health care professionals and others to recognize and respond appropriately to trauma within their communities.

Because all of them will be interacting with individuals whose lives and behaviors have been shaped by childhood trauma, Yackley said.

The good news, Yackley says, is there's something that can mitigate the damage - and it won't cost millions of dollars: Human connection.

"You don't have to be a therapist to be therapeutic," Yackley told a roomful of social service providers at a training in Kensington earlier this summer.

After explaining the brain science behind trauma and ACEs, she stressed that the real solution is the involvement of caring adults in a child's life. That can actually rewire the child's brain and mitigate the damage done by chronic stress.

What makes something traumatic? "It's something that has a lasting impact, not just a trigger effect," she explained.

It's also highly subjective, she said. And the sad truth is that the majority of violence that causes trauma occurs within the home.

Chronic stress, Yackley said, causes hyper-sensitivity and hyper-arousal; the most common example is veterans who suffer post-traumatic stress. For the developing brain, "it's like a path in the woods," she said. "That path gets taken again and again and again."

When children grow up exposed to traumatic events, she said, they experience shame and feel unworthy of love and belonging. As a result, they don't think other people are trustworthy. "And if I don't feel worthy, and I can't trust other people, the future and the world are bad."

The answer, she said, is to make a new path. Yackley works with families to help them heal together, atone for past harms, and repair broken relationships.

"I believe in my heart of hearts that the way we're going to resolve the issues we have in our society is we have to take care of the caregivers," she said.

The landmark ACEs study done in the late 1990s proved that the more adverse childhood experiences a person had, the more likely they were to suffer mental, physical and emotional difficulties, substance abuse and attempted suicide. And subsequent studies have continued to show, Yackley said, "the more ACEs we have, the larger and potentially more significant those impacts."

Individuals with six or more ACEs have a life expectancy that is 20 years shorter than those with none, for instance, Yackley said. "We're completely shaped, in good ways and bad ways, by the experiences we have in our lives," she said.

That's why she spends so much time training providers, police and educators about "trauma-informed" care. It's up to the entire community, she said, to help at-risk children build connections with caring adult mentors - to create flocks.

"My worry is if we leave it to just the therapist to do, it actually might not get done," she said.

Beyond the Stigma, a series exploring solutions to the state's addiction and mental health challenges, is sponsored by the New Hampshire Solutions Journalism Lab at the Nackey S. Loeb School of Communications and funded by the New Hampshire Charitable Foundation, Dartmouth-Hitchcock Medical Center, NAMI New Hampshire, and private individuals. Contact reporter Shawne K. Wickham at swickham@unionleader.com.